'City Adaptation Lab!' explores 15 urban issues and our response to them presented by a diverse group of creators

When entering the exhibition "City Adaptation Lab!" at Bangkok Art & Culture Centre (BACC), visitors cannot miss the sculpture Rok-Ra-Bat (Pandemic) by Kaninyan Chandrasma. It is a broken tube sitting on a tall pedestal. According to the description, one small silver dot breaks out from the broken tube and multiplies into numerous silver dots which resemble a pandemic spreading around the world. If visitors take a closer look at the silver dots, they will see their reflections in each. This raises the question if the origin of the pandemic is people.

Rok-Ra-Bat is one of 15 creations at "City Adaptation Lab!" which represent 15 urban issues from various artists and creators. The issues include acid rain, PM2.5, food contamination, overcrowding, flooding, traffic jams, noise pollution and stress. Vipavee Kunavichayanont, a guest curator of the exhibition, explained that the concept of "City Adaptation Lab!" is how people adapt to changes.

"Due to Covid-19, many things have suddenly changed. The team wanted to explore how people have adapted to survive the current situation. Before addressing adaptation methods, we had to figure out the issues we were dealing with. We went through every layer, from the underground to earth to water and to air and listed 15 issues. Exhibition pieces were created by people from different fields such as art, music, architecture, engineering and community development. These creators designed pieces and conveyed messages from their experiences," Vipavee explained. 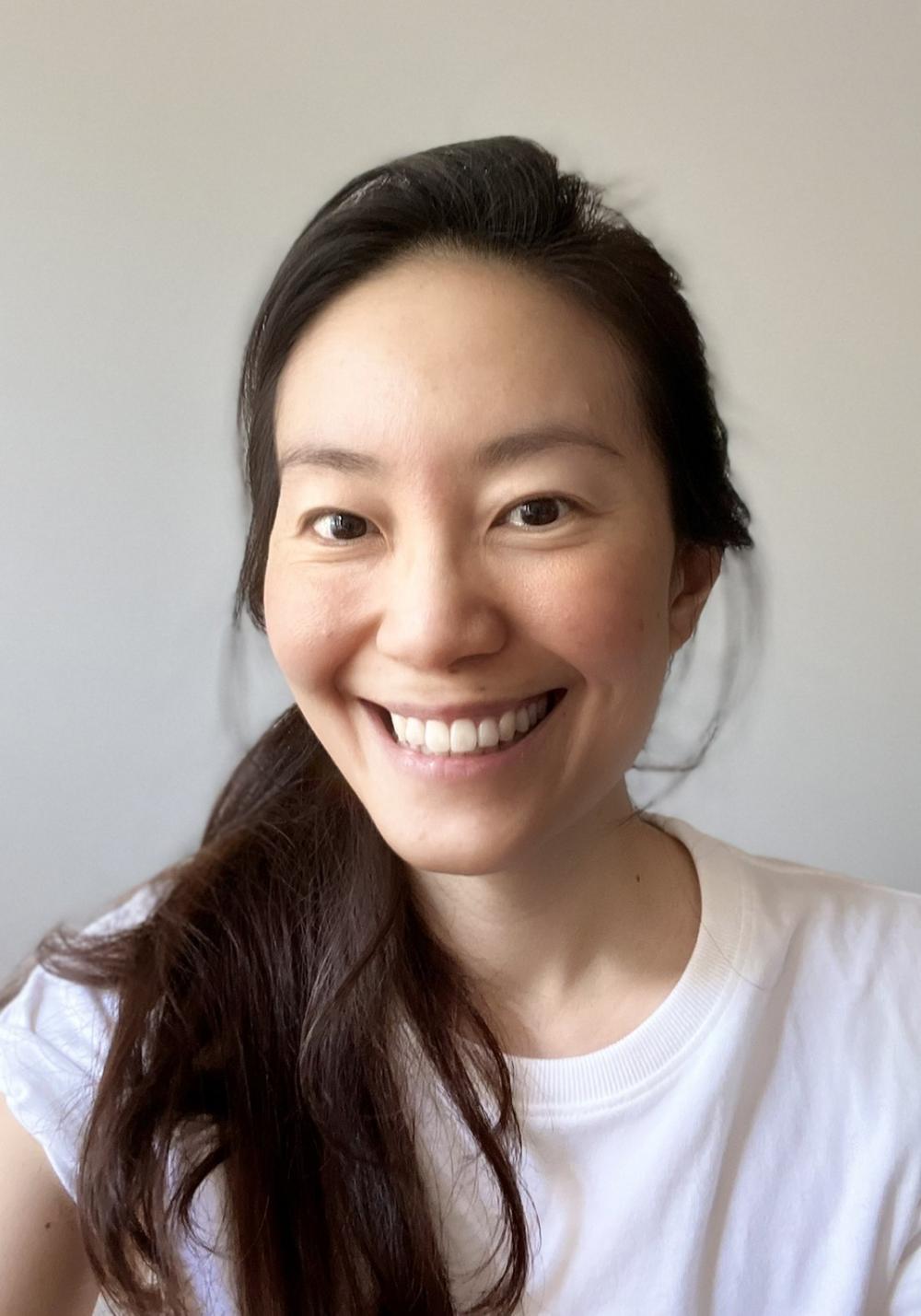 Since technology has played an important role during the pandemic, the curators decided to add Virtual Reality (VR) and Augmented Reality (AR) to the exhibition. While VR is a computer-generated environment that looks real and sometimes requires special viewing glasses, AR is an enhanced interactive experience of the physical world. The co-curator, Rinrada Na Chiangmai, explained that this is the first exhibition by BACC which features VR and AR.

"While working on the exhibition for over two years, situations continued to change, but we could communicate with others online. Thus, we thought if there is an online exhibition, people could access it wherever they are. Currently, viewers have to download the BACC application on their mobile phone and use it to scan codes for each of the 10 art pieces. Next month, the virtual exhibition will be available online," said Rinrada.

"Teachers or students can take photos of 10 codes and print them out or scan with another mobile phone. Then, AR or VR will pop up. This can be useful as long-distance learning material. Another challenge in creating AR and VR was that we wanted many people to be able to access it. Hence, we had to create quality AR and VR which is accessible on old mobile phones as well, so it was difficult to figure out this balance. As a result, viewers can use their Android phones from even seven years ago or the iPhone 6 to view AR and VR," said Vipavee.

In addition to professionals in art and design, there are creators who are celebrities such as Phusanut Karunwongwat, from the Little Monster Channel on YouTube, Note Panayanggool, a singer and environmentalist, and Thaneth Warakulnukroh, a singer. The curators said they did not intend to attract a crowd with celebrities. Instead, they wanted to present various perspectives of people from different generations and walks of life.

As a YouTuber, Phusanut created a video, Migration…Of Spirit, in which he talks to his little daughters, Gin and Rainnie, about evacuations. Note collected sounds from nature and cities and presented them in a video Mother Nature Presents iHear. Thaneth also wrote a poem titled Humans Of Bangkok In Progress about the capital. 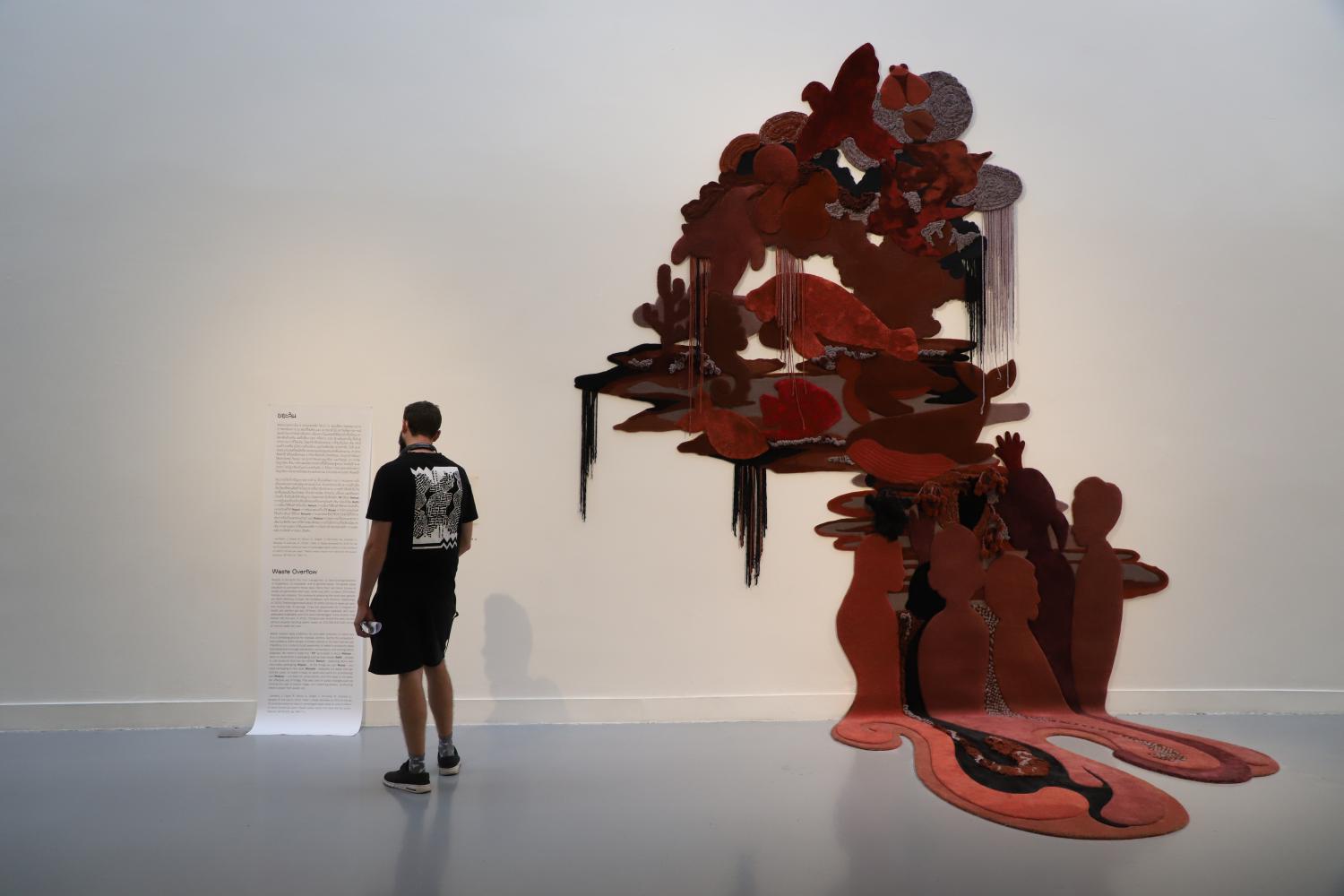 Waste Overflow Kills! by Singh is a carpet made from recycled and upcycled plastic waste with AR media. Singh conveys that the horror of trash is more frightening and dangerous than the Covid-19 pandemic because it can kill people, destroy other living beings and the whole ecosystem. The carpet artwork depicts the path to death of various living creatures.

"Waste Overflow Kills! is a hybrid creation that displays a physical carpet and AR art. The AR art is a game that provides knowledge about waste sorting. Singh, as the director of the Research and Innovation for Sustainability Center, and his crew teamed up with The Carpet Maker, a textile manufacturer, to create the piece which is made from more than 100 recycled and upcycled plastic bottles. This creation triggered a lot of topics for discussion and people were able to connect with one another," said Rinrada. 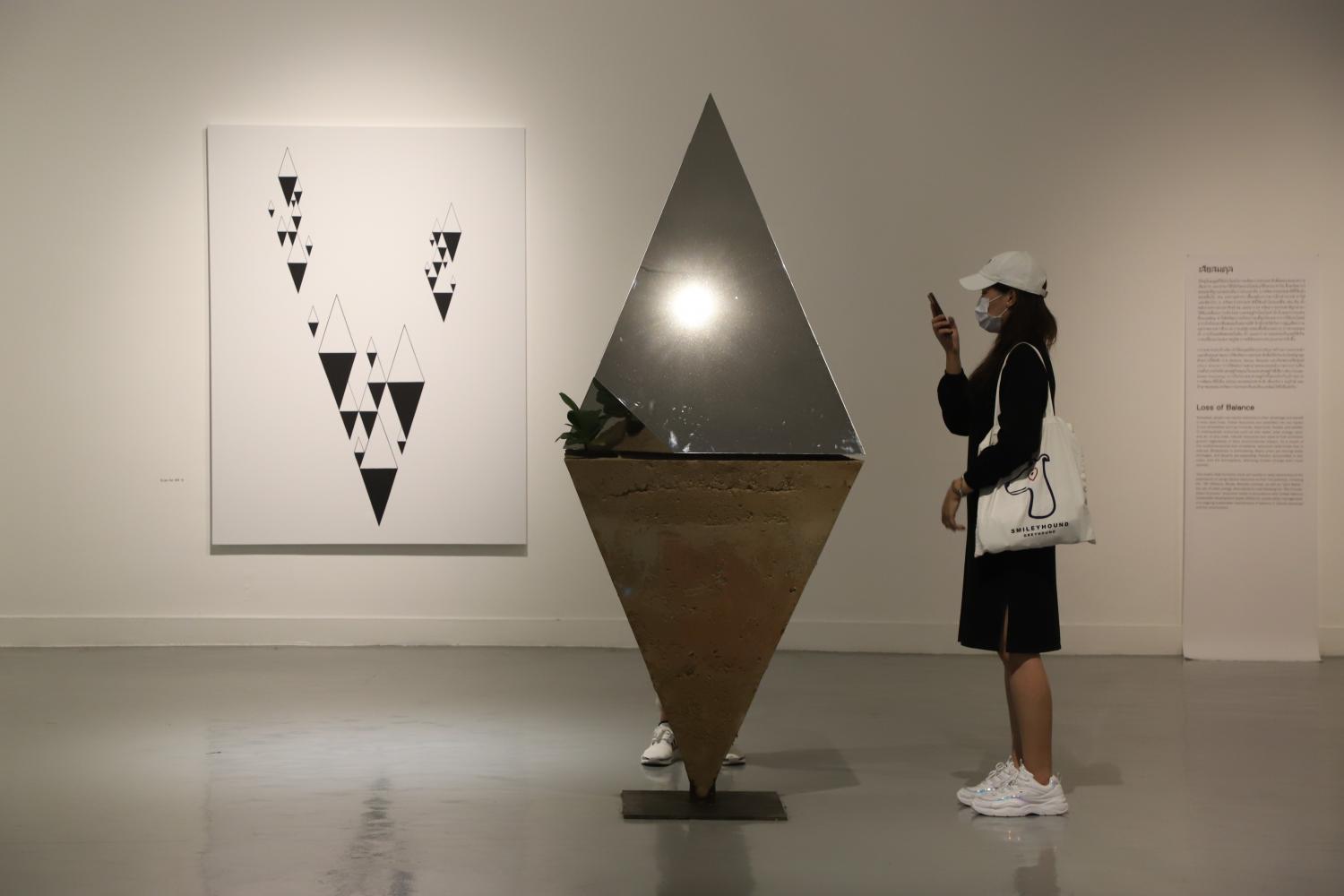 Biogenesis by Suriya is an installation featuring AR media. Suriya represents the past and present through a pyramid shape installation. Meanwhile, AR media presents the future fantasy world.

"Suriya's idea of the past is depicted in the form of a pyramid made from soil. He conveys the present by sharing the design of 'the Pordee-Pordee house [adequate house]' which is a budget-friendly stilt house. The design is available to download at the exhibition via mobile phones. People can follow the design to build a house by themselves. They also can utilise materials they already have, such as old window and door frames. In the future, he is open to the idea of how people can live during flooding," Vipavee said.

The poem Humans Of Bangkok In Progress by Thaneth can be a conclusion of the exhibition. 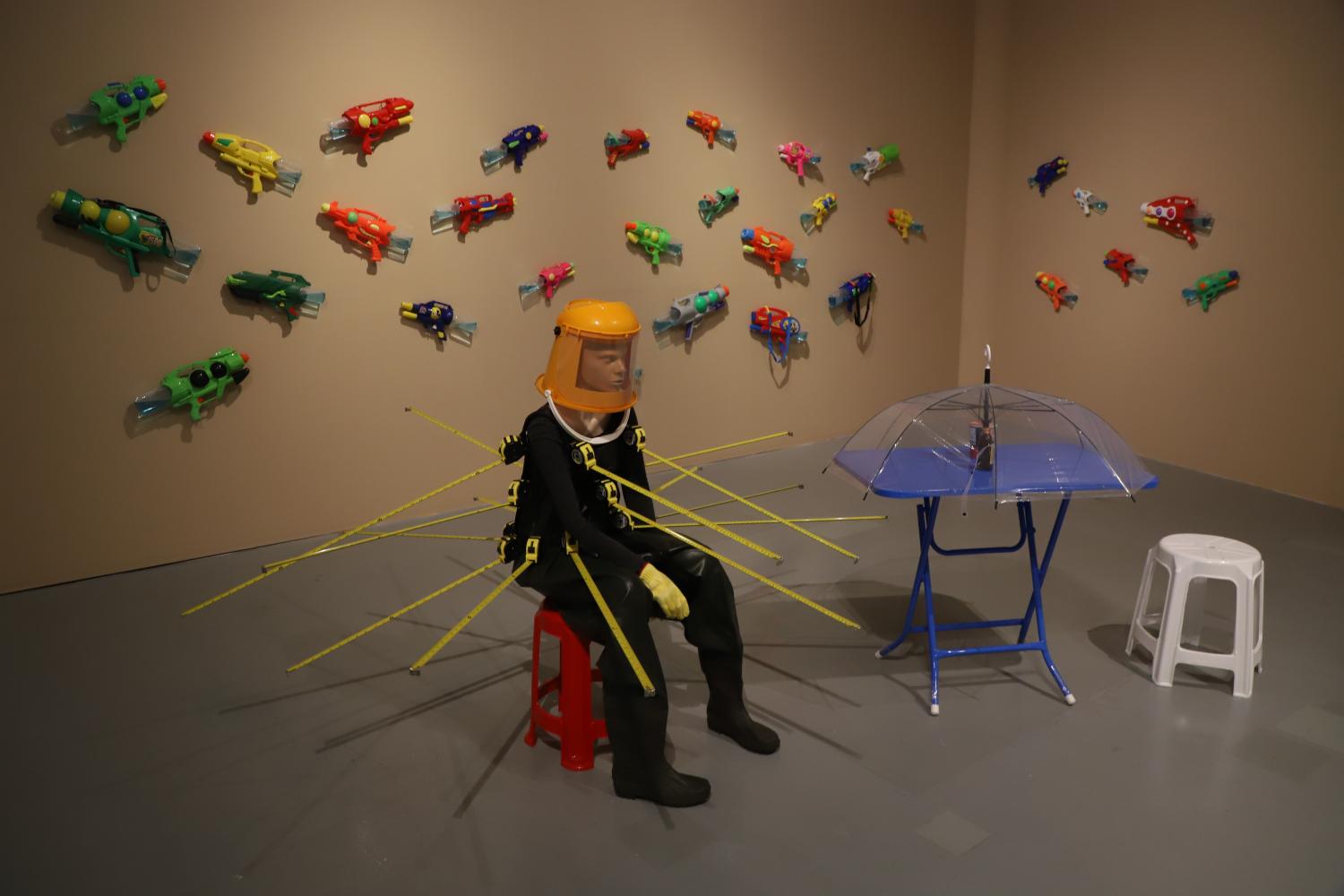 Besides descriptions of 15 creations, the curators researched 15 issues addressed in the exhibition. To ensure the accuracy of the information, Rinrada contacted officials in 11 state departments of six ministries and asked the officials to examine the information they had researched.

"Most officials needed an explanation about what the information was for. It was a great start to let officials in state agencies know that art and creation is not something far from them. Art and exhibition can present issues about the city, people and other surroundings and/or address other serious issues. They are not limited to only beauty and aesthetics," Rinrada said. 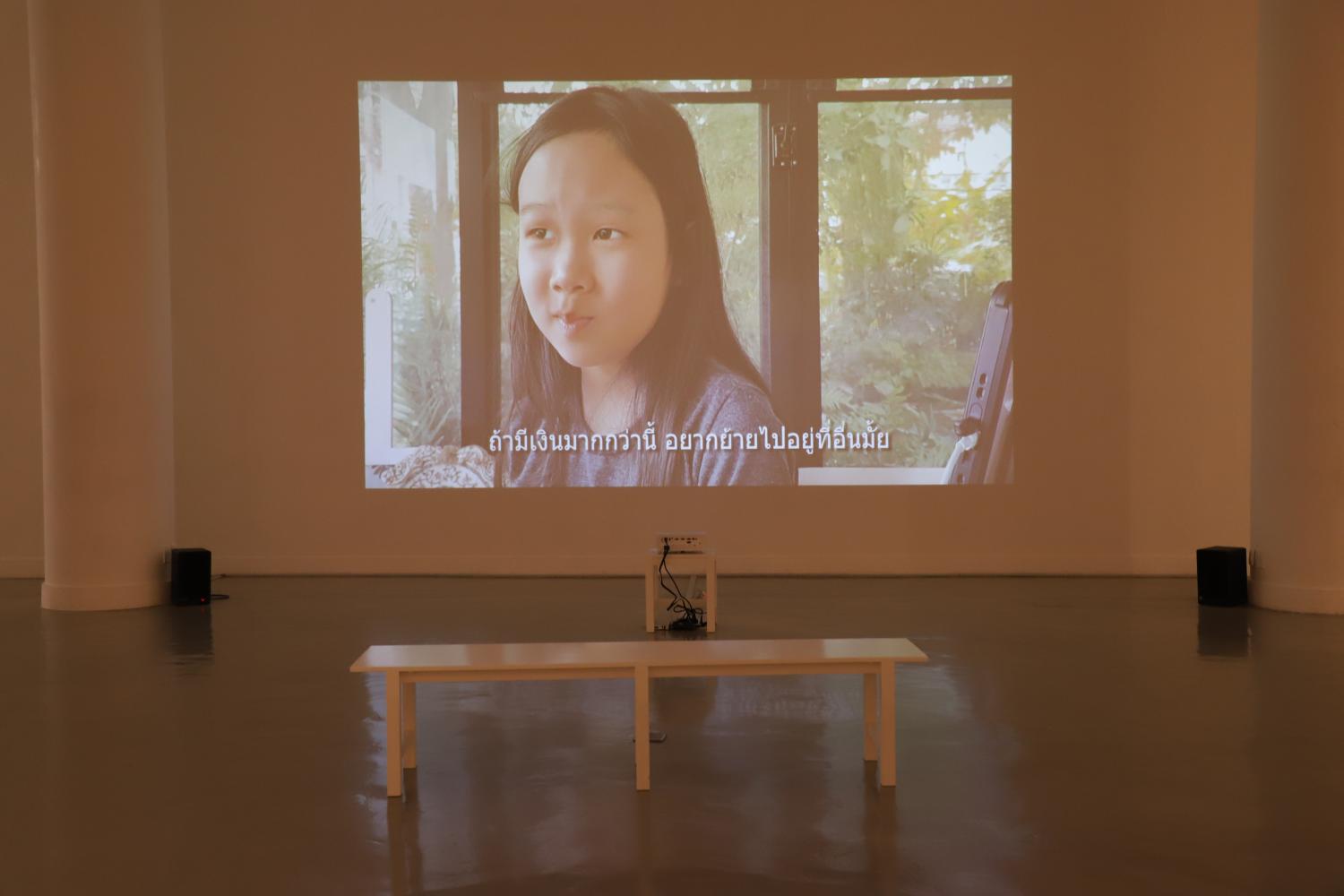 A YouTuber from the Little Monster channel, Gin appears in a video that her father Phusanut Karunwongwat created. Arnun Chonmahatrakool

Adaptation involves change and sometimes the adaptation can affect the surrounding environment. Regarding the balance of people's adaptation to nature, the curators have the following opinions.

"Humans are a part of nature. If we feel inside that we are in balance, and our actions do not cause any trouble or harm to others, that is the balance. I hope that the 15 creations will provoke some thoughts or viewpoints in people, so they can find a way to adapt the thoughts or viewpoints of the creators into their own experiences and use them to suit themselves," Vipavee said.

"I expect that we will reach the point that our adaptations are in balance with nature. It should be a goal that motivates us. Also, I hope that this exhibition will be a link between art and technology. It can be a source of information that encourages viewers to ponder the issues and try to do something," concluded Rinrada. 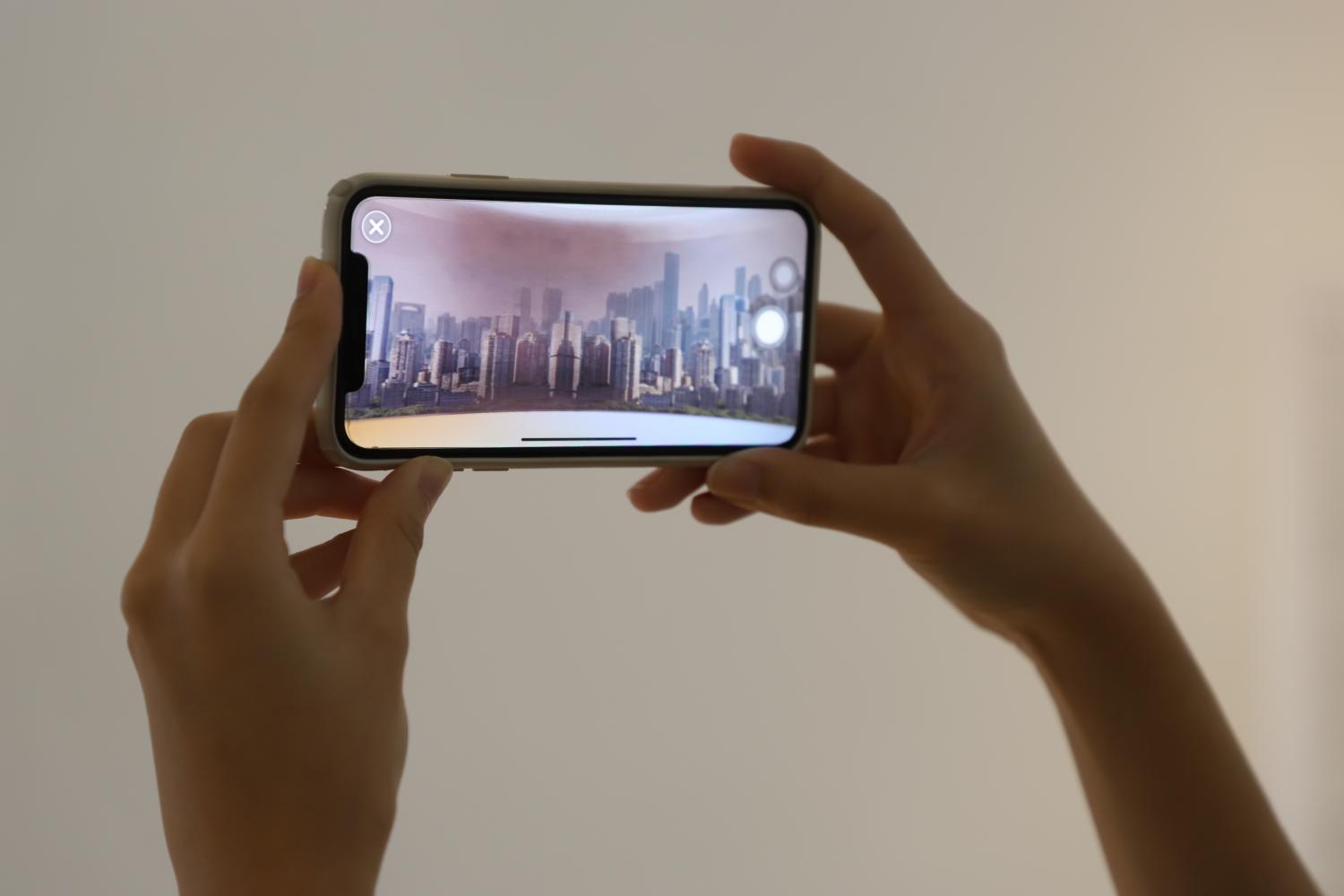