Illustration is an art form that is currently widely accepted and far-reaching because its platform is not limited only to art galleries. Illustrators create a wide range of characters and come up with different methods to express their ideas. At SAC Gallery, six renowned illustrators present their perspectives at the exhibition "Wrap".

Tachamapan conveys the meaning of home through a living space that encapsulates the bond of her family. Meanwhile, Wisanu expresses the chaos of societies and politics through characters. Cherdsak expresses his interpretation through his signature character, Fingies. 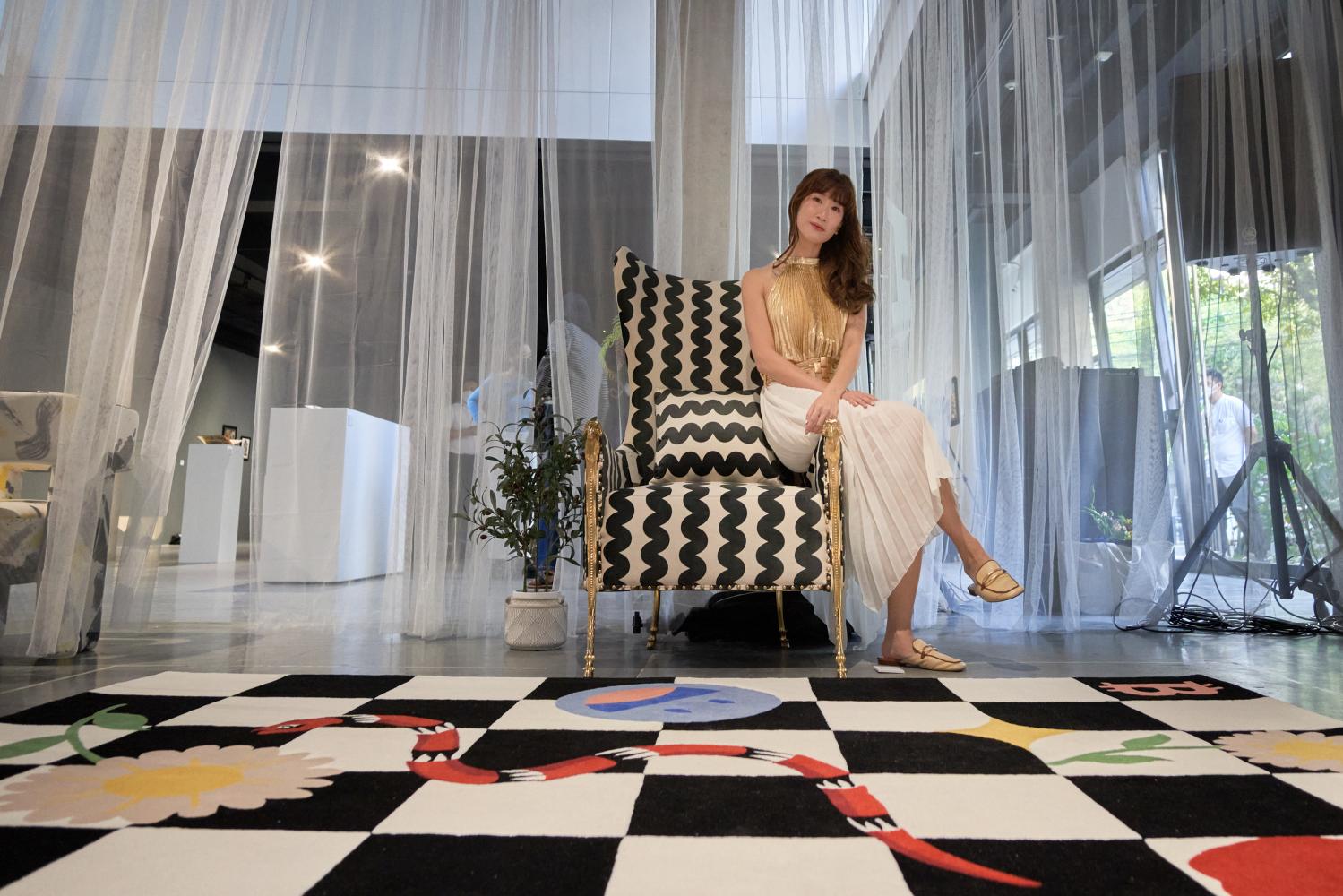 Due to her impressive creativity and unique design, renowned illustrator Tachamapan has worked with many global brands including Marc Jacobs, Nike, Microsoft, MTV and the Oscars. Aside from being an illustrator, Tachamapan heads two businesses -- the illustration-based Happy Pomme Studio and home décor brand Swoon.

In order to work on "Wrap", Tachamapan had to take some time off. The illustrator said this is the first exhibition where she told stories about her childhood since she interpreted "Wrap" as home.

"Home is the first place that shelters me. It does not matter where I am and what I have been through, home is the place I miss the most. Since quality time at my house happens at the dining table, I painted the dining table on a cabinet-shaped installation, Dining Conversation. All kinds of conversations -- compliments or arguments -- happened there," said Tachamapan. 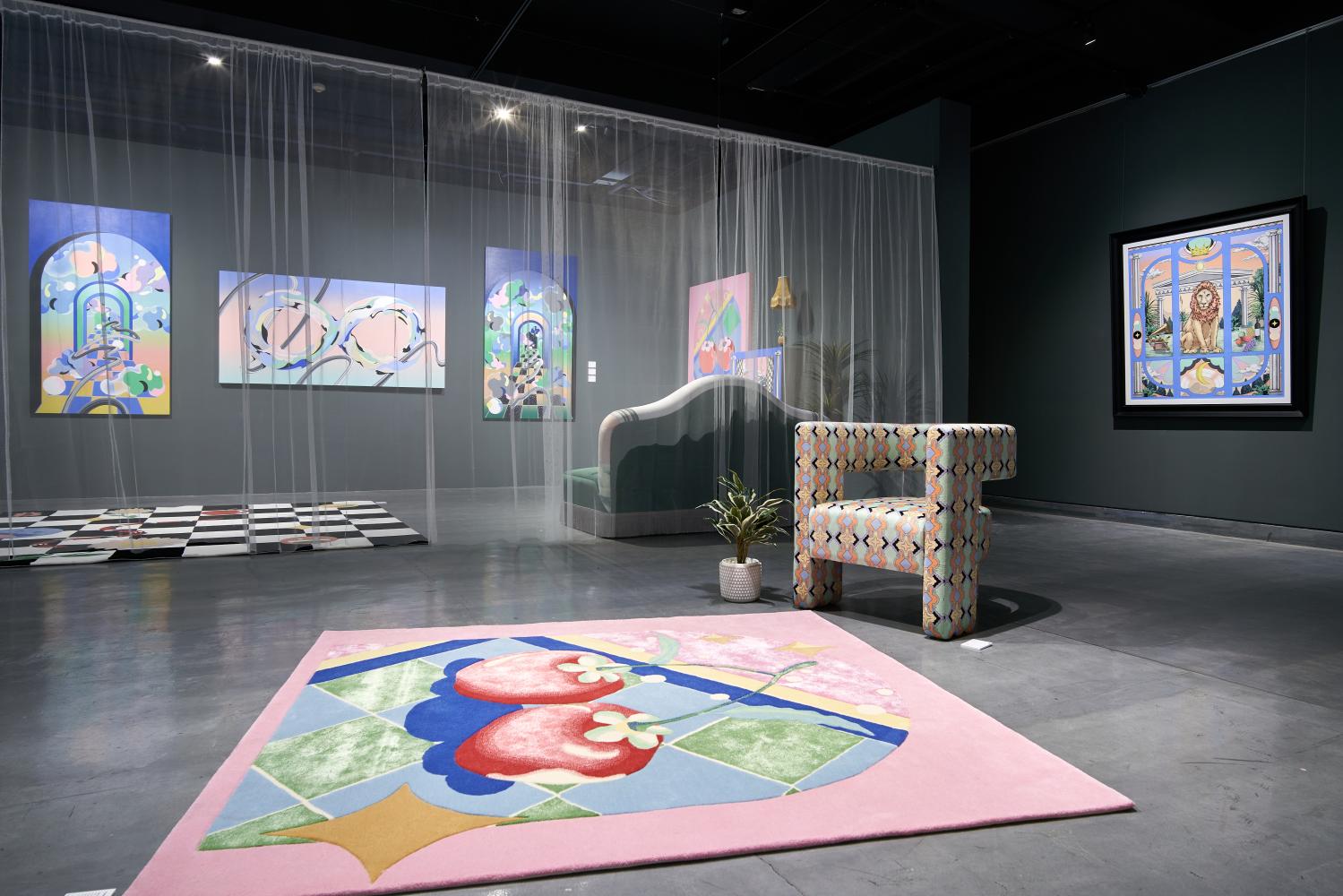 On the wall from left, Day, Infinity and Night. On the floor, two hand tufted carpets, Playtime and Let's Cherish Every Moment.

Tachamapan's exhibition portrays a living space in her house. Her illustrations appear on installations that resemble furniture. There are three armchairs in graphic design, Morning, Kitsch Chair and Abstract, one sofa, Dreaming, two hand tufted carpets, Let's Cherish Every Moment and Playtime, and one partition, Fatherhood. Each piece includes symbols that relate to the memory of her childhood. Cherries that appear in Let's Cherish Every Moment refer to special moments in her family.

"When I was young, cherries were expensive. If I opened the refrigerator and found cherries there, I knew there would be a celebration for a special event. I drew checkered patterns in the background of this piece because it was the pattern of the tablecloth at that time. I was thinking about my late father when I painted the partition, Fatherhood. He was like a lion who looked after family members. Another checkered pattern carpet, Playtime, resembles a board game that I played with my nephew and my mother. It was quality time that three generations spent together. I tried to create every piece from my memory; I did not refer to any photos at all," Tachamapan said.

As an illustrator who graduated from London College of Communication and worked in London for a decade, Tachamapan is a role model that aspiring illustrators look up to. She encourages youngsters to go abroad to study and gain new experiences. For those who cannot afford to study abroad, Tachamapan suggests those young illustrators should set up a professional website.

"I currently contact my agent in the US and international clients online. If illustrators want to be hired at professional prices, they must launch a professional website that categorises their work, so clients can view their portfolio easily. It is a basic requirement," Tachamapan advised. 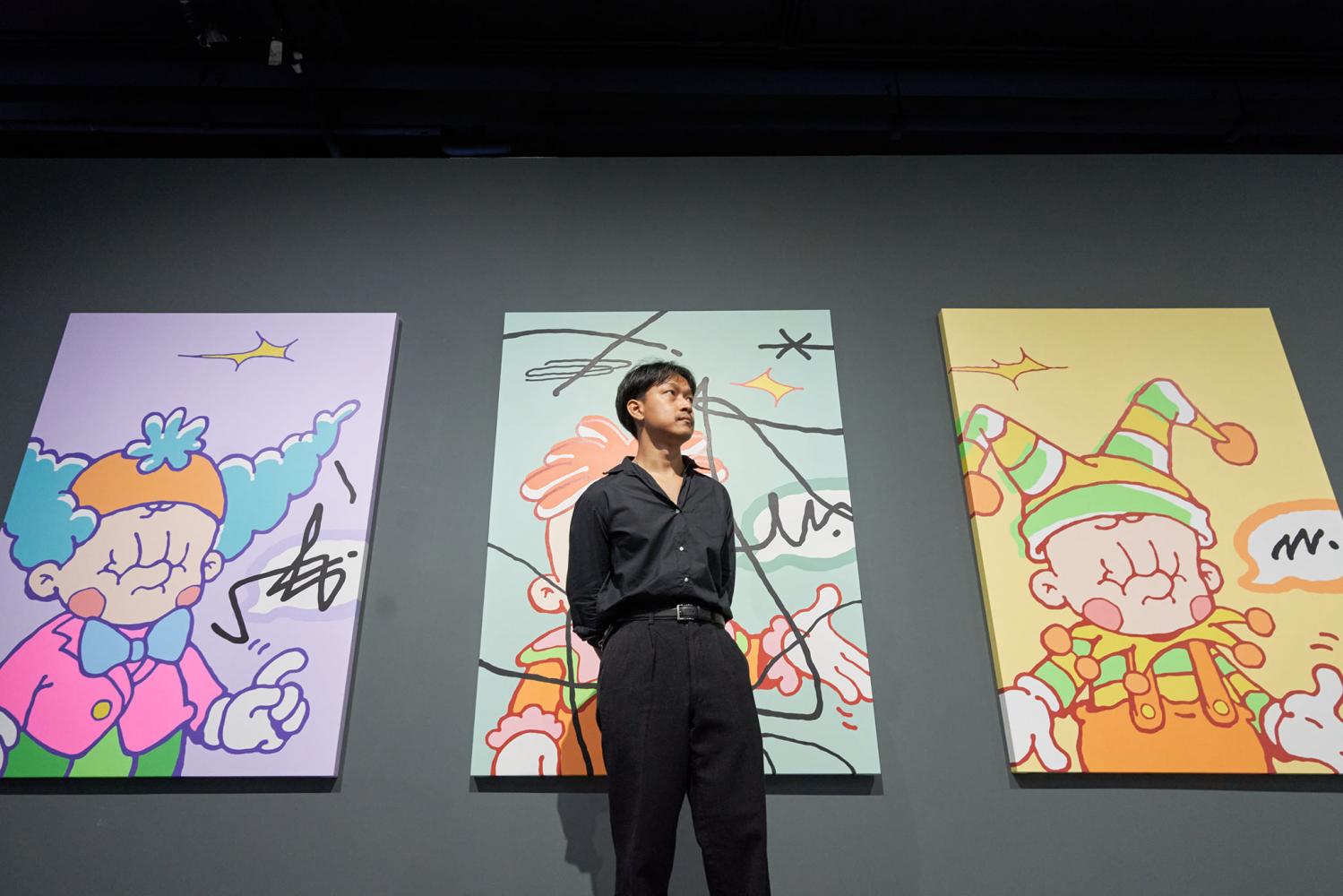 Cherdsak created a series of his four paintings by connecting the concept of "Wrap" with language and words and conveyed them through his signature character Fingies.

"Words are intriguing since we can use them to either conceal or reveal our true identities. People may never know who we really are if we intend to hide ourselves with our words. Inspired by the movie Joker, the characters in all the paintings are clowns that talk, but their words do not carry weight and have no meaning. If we were a clown who tells the truth, people may not believe us. For example, if the theatre is burning and a clown runs on the stage and shouts 'fire', people may think that it is a joke," Cherdsak explained.

"All the titles can be switched around since viewers cannot tell which characters in the painting are concealing or revealing themselves," he said.

Cherdsak earned his bachelor's degree in urban architecture at the Faculty of Architecture, Chulalongkorn University, and worked as an art director in the advertising industry. During that time, he discovered his love of art and became a street artist. Cherdsak developed his signature character, Fingies, from a habit of drawing his own hands during his free time. At one point, Cherdsak decided to learn English in Melbourne, Australia, where his works caught the eye of people in the art industry.

"I worked on several things. I visited art galleries and listed which ones matched my style and sent my works there. I also kept an eye on open calls at art galleries. When there was an opportunity, I submitted my works. I hung out with local artists to learn where street artists could create murals. Once, I received a message from someone who saw one of my murals and looked me up on Instagram because he wanted me to work for him," said Cherdsak.

Although Cherdsak's artwork is notable internationally, he does not have high expectations from this exhibition.

"My duty is to raise an issue. This is my role, but it depends on viewers to consider the issue. When I worked in the advertising industry, I used to aim to create an ad that changed the world. That goal was too big and brought too much pressure. I currently want to have fun while working, so I do not have much expectation," Cherdsak said. 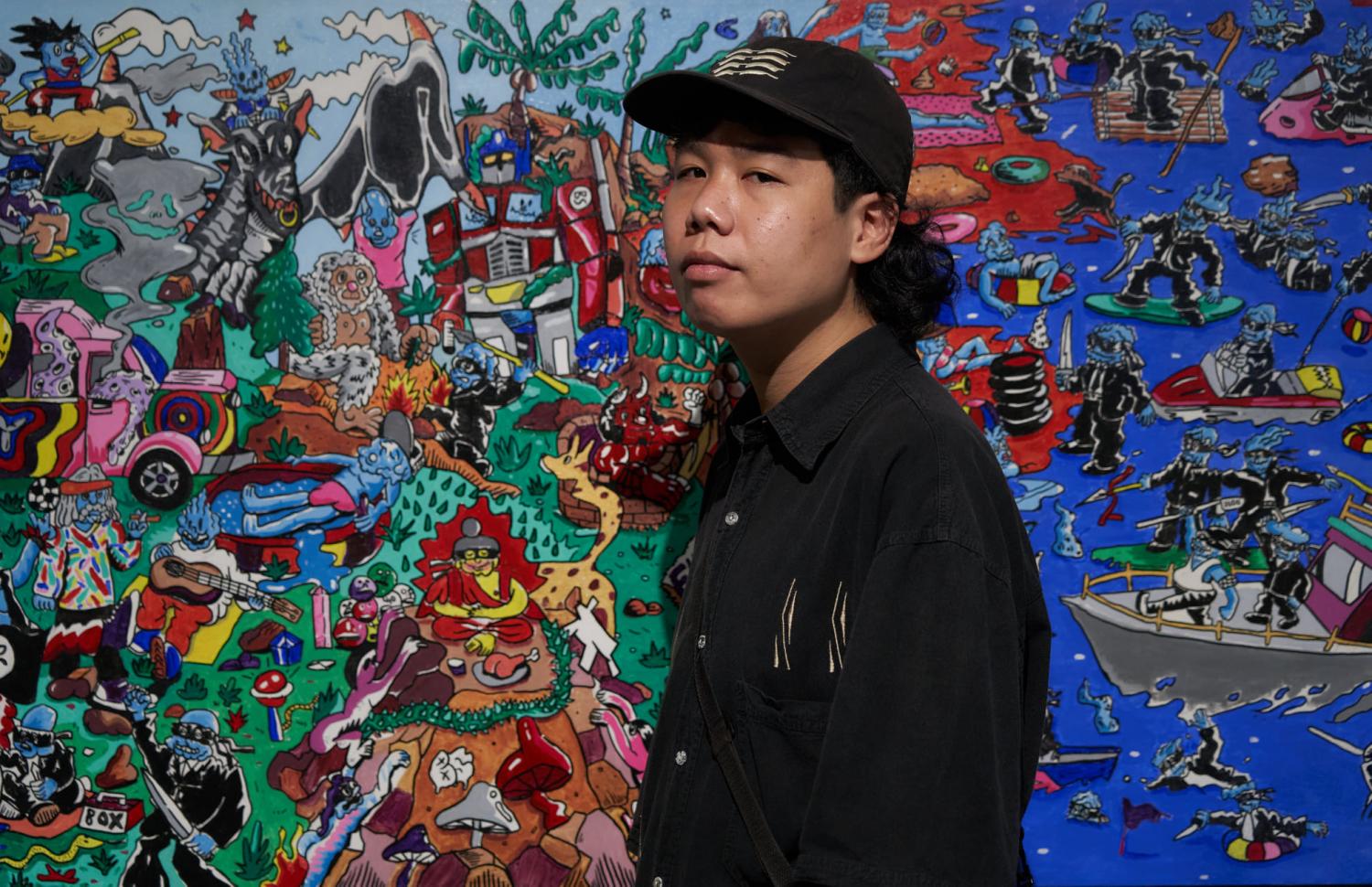 This graphic designer and cartoonist based in Chiang Mai created three paintings -- Battle Field, Crazy 88 and The People for "Wrap". Wisanu said his illustrations can work with either commercial art or fine art. The largest painting, Battle Field, depicts pictures of The People who hang out happily on the beach and are attacked by Crazy 88 who try to invade the peaceful land.

"Battle Field depicts the whole event. Meanwhile, Crazy 88 and The People focus on what each group is doing. Nobody likes war, but every country has histories that involve wars. In the past, there was physical fighting, but currently, there are other non-physical wars such as economic warfare, biological warfare and social media warfare," said Wisanu.

"The characters in Crazy 88 were inspired by the villains in the movie Kill Bill directed by Quentin Tarantino -- one of my favourite directors. They wear neat black suits and have great weapons, but behave badly. The People depicts the general public who lift a log together in order to fight back the invaders, Crazy 88. For me, Crazy 88 represents the right wing and The People represents the left wing," he explained. 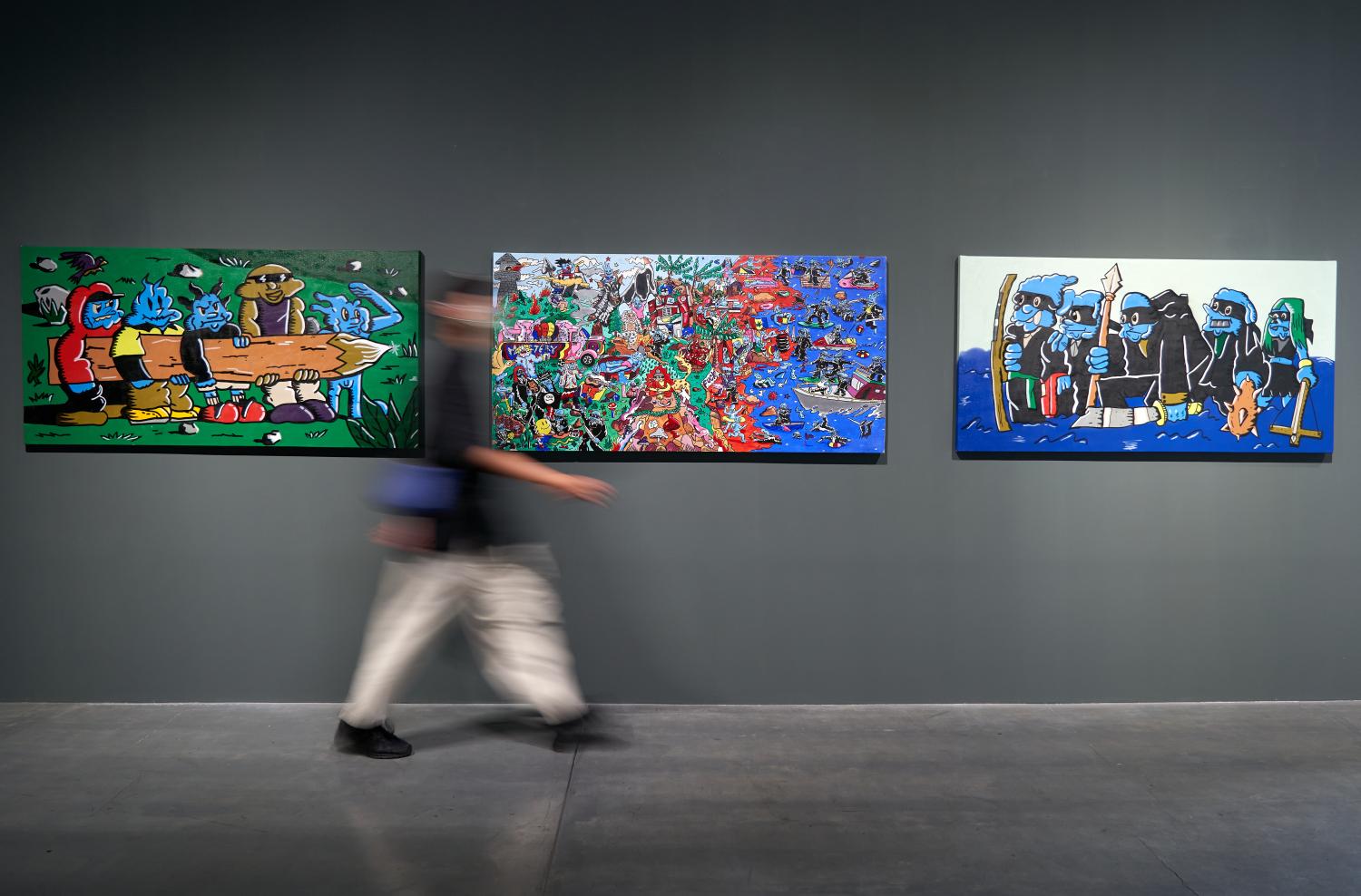 From left, The People, Battle Field and Crazy 88 by Brightside.

Wisanu grew up with TV which made him interested in pop culture and it is his source of his inspiration. Currently, he is no longer interested in TV, but has turned his attention to social media instead. Since he follows updated news and events, the illustrator often expresses his opinions about politics and social issues through his artwork. He hopes that by displaying his work in Bangkok, he can reach more viewers.

"I hope that my artwork can change society and my messages can become more public and reach a larger group of viewers. When I exhibit my work in Chiang Mai, I usually meet the same viewers. I hope other new viewers can see my work at this exhibition," Wisanu said. 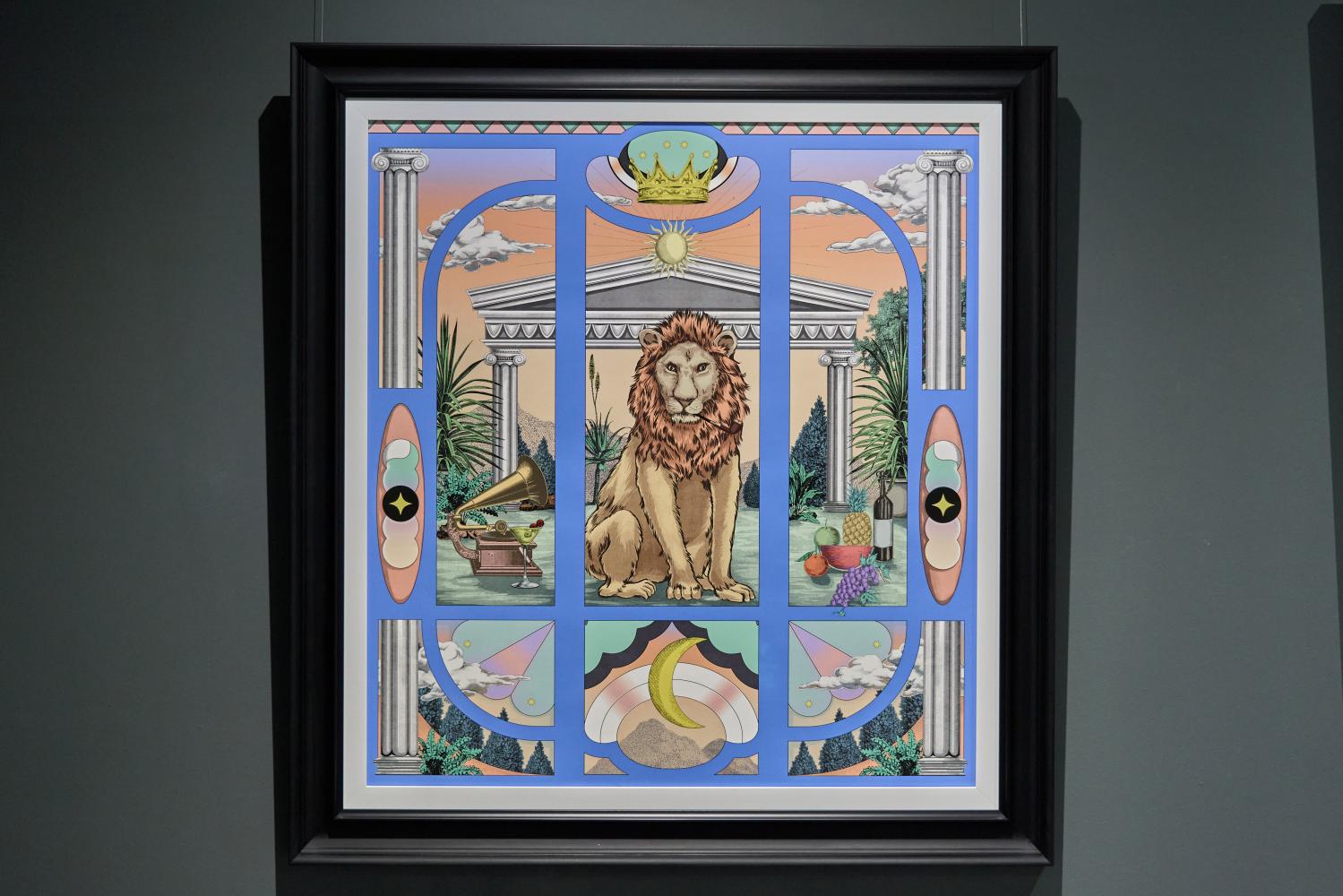 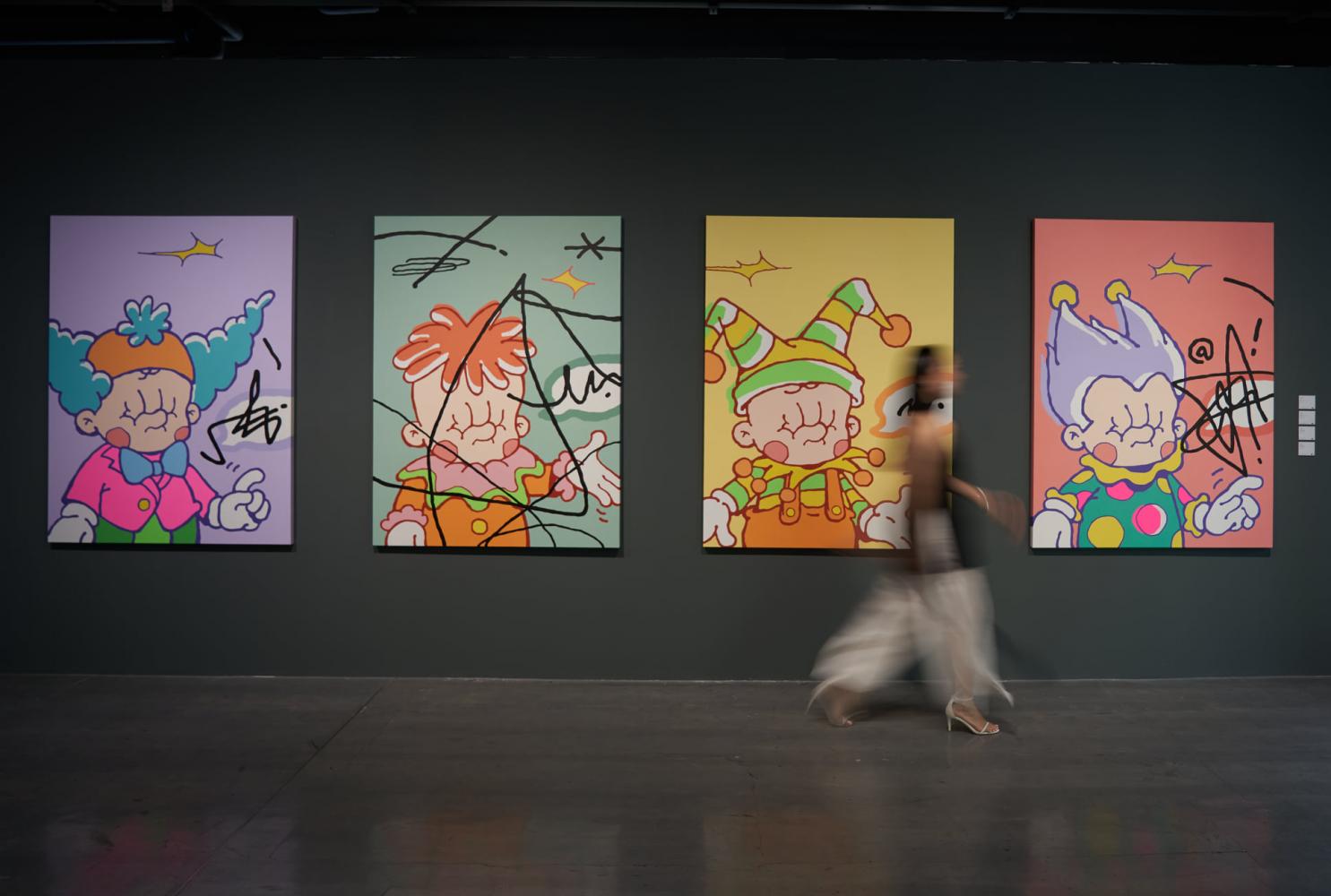