At the crossroads of history
Life
Arts & Entertainment

At the crossroads of history

Photojournalist Vinai Dithajohn's work, on display at VS Gallery, is a mosaic of politics and protest

In a career than spans three decades, photojournalist Vinai Dithajohn has risked his life covering several coups and protest movements mostly using Democracy Monument as a vantage point. An exhibition of some his most harrowing shots and others that humanise protesters and police officers alike is currently on display at Bangkok's VS Gallery.

Vinai, who has worked for top agencies and newspapers such as Time magazine, European Pressphoto Agency, South China Morning Post and many more, selected photos he shot around Democracy Monument for his photo exhibition "The People's Road k.m.0". The 0km marker referred to in the exhibition title is located at the corner of Dinso Road and opposite Democracy Monument.

"The Democracy Monument is the symbol of democracy in Thailand. On June 24, 1940, Field Marshal Plaek Phibunsongkhram, the prime minister at that time, said the monument would be the centre of civilisation and a starting point of roads to other regions. I have seen the monument since I was young. It is a landmark that inspired me to create this exhibition. The photos I took at the monument portray diversity of people and stories," said Vinai.

The exhibition, located in a room with a mezzanine on the 1st floor, presents photos divided into day and night shots hung on two different sides. 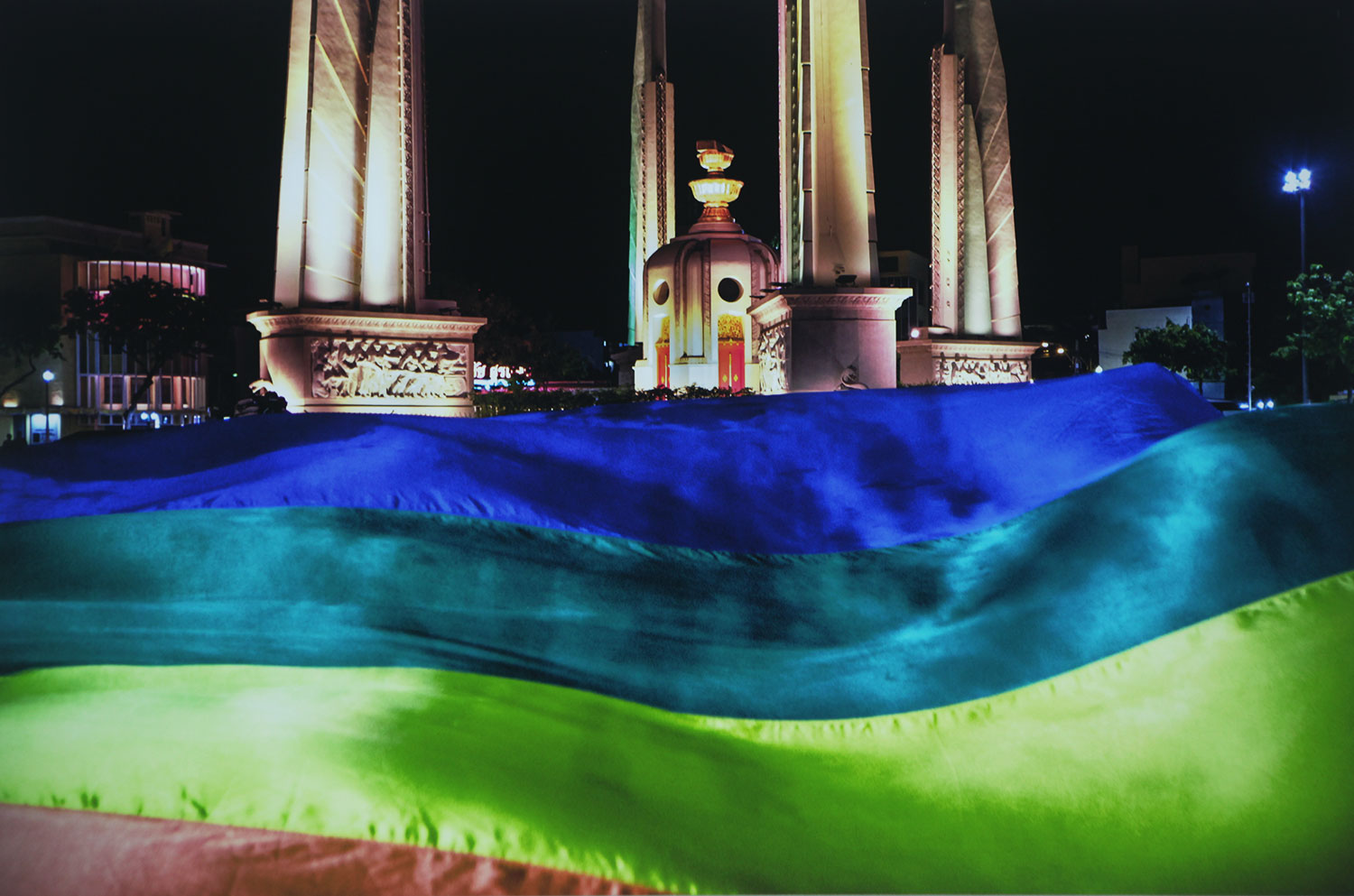 "On the mezzanine, viewers will see a photo of young protesters faced against the photo of a soldier. They represent opposing sides. Young protesters represent a threat to authorities because they will grow up to be smart and powerful. Since the young generation wants freedom and equality, they will continually think of ways to make changes in the country," Vinai explained.

"Democracy Monument is located at a roundabout, so photographers can view it from various angles. When I was there, it was chaotic and there were both interesting and not so interesting happenings around the monument. Since I have worked with international news agencies, I have learned to capture aesthetic visuals," he said.

Most exhibited photos display different groups of protesters at Democracy Monument, but the images also include scenes such as a reflection of the monument in a restaurant's windows; nine Thai traditional dancers waiting for their turn to perform; and custodians cleaning up the area. Vinai said he added these photos in order to make visitors feel calm. 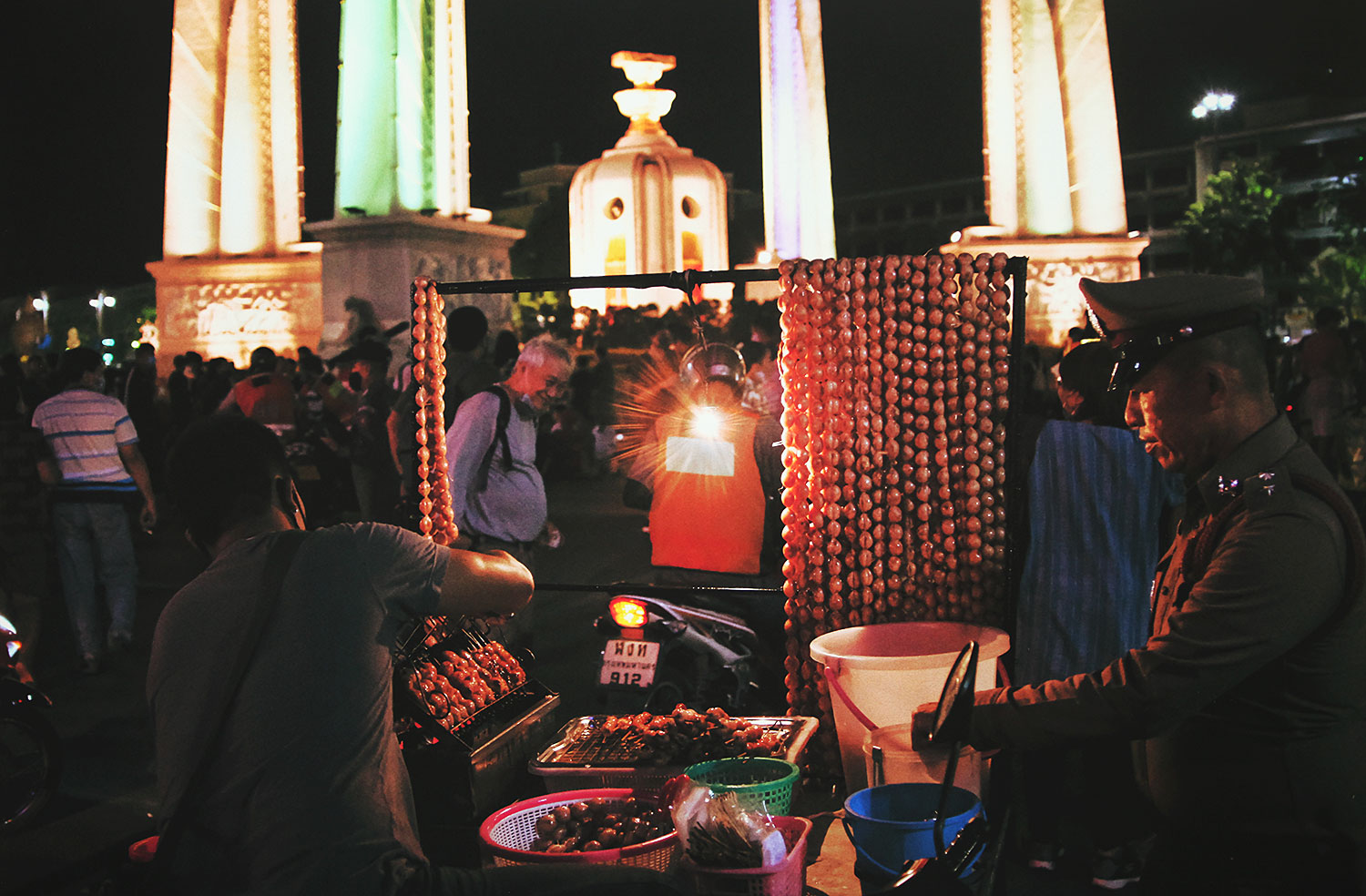 In another photo of a police officer purchasing Isan sausages from a street vendor, Vinai said he wanted to humanise the public servant.

"The photo showed that an authority is a human being. He has duty and authority, but he still has to eat. Isan sausages also refer to people from Isan. Authorities are usually afraid of Isan protesters because of their power in numbers," he said.

Vinai has a keen eye for aesthetic visuals and the ability to improvise excellent shots. In 2002, his photo essay on sea gypsies was awarded first prize in a contest sponsored by National Geographic Thailand. In 2007, he was the winner of the Foreign Correspondents' Club of Thailand Photo of the Year Award. A year later, he won second prize in the feature photography category.

Vinai has an unusual background. When he was young, he worked as a cassette tape seller, bus conductor and soldier. As a bus conductor, he saw photojournalists in the movie The Killing Fields and was fascinated with how they used their camera equipment. Being a photojournalist became his dream career.

After he left the military, he bought a camera and self-taught himself the craft. Then, he was hired to be a photographer for The Dog magazine even though he had only practiced with one roll of film. His enthusiasm allowed him to quickly learn advanced photo techniques and he was always improving his skills. After gaining experience by working at several titles, he is now a full-time freelancer and owns the copyright to his work.

Vinai has risked his life at protests, being shot four times. The most serious injury occurred at Makkhawan Rangsan bridge in 2010 when former prime minister Abhisit Vejjajiva cracked down on Red Shirt protesters. Vinai lost a lot of blood, but he said he was not afraid of dying. 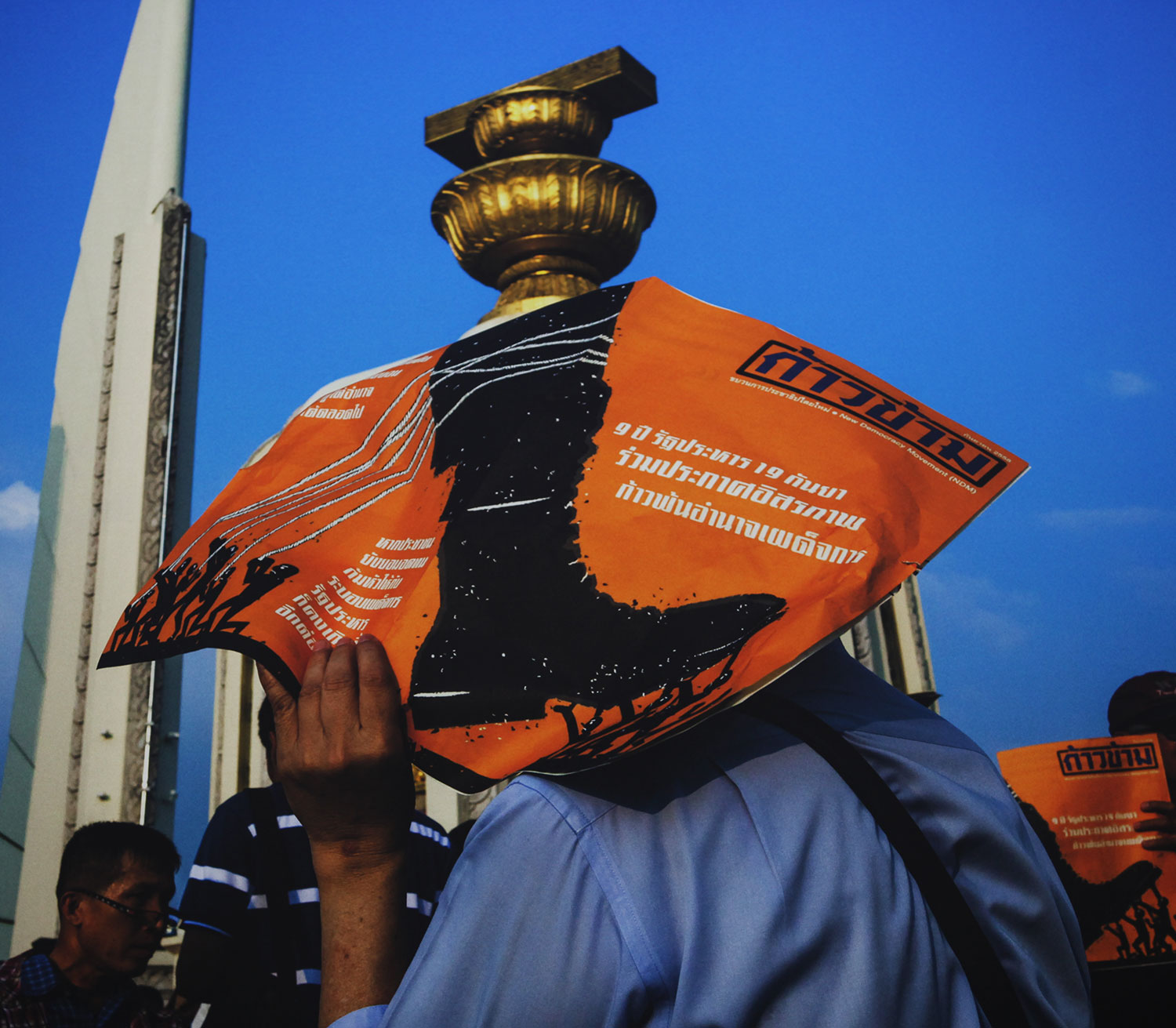 A military boot appears to be under the golden tray carrying the Constitution of Thailand on the top of Democracy Monument.

"Due to so much blood, my eyesight was blurred. I received first aid at the protest area. Before going to the hospital, I did not pray and was not worried about anyone. I just wondered what would happen next. I do not want to live a long life and I always live my life to the fullest, so I am not afraid of dying," he said.

Vinai has captured many historical and political moments that won admiration from international audiences. His photo series "Thailand's Reds And Yellows" was selected to showcase at the sixth Suwon International Photo Festival in South Korea in 2019.

"The festival is an honourable event that values freedom of expression. My photo series was displayed as the main exhibition and I was interviewed by a media representative. Before I was in South Korea, I learned their history. I realised that South Korea had fought for a long period of time for their independence and democracy," Vinai said.

Vinai does not support dictatorship and the junta government. One main exhibition photo is a pamphlet of a military boot that seems to be under the golden tray carrying Thailand's Constitution on the top of Democracy Monument.

He captured this photo in 2015 when Thammasat University was holding a seminar for the ninth anniversary of the 2006 coup. The military boot was an image on a pamphlet that a participant used to shade himself from the sun while walking past the monument.

"My photos communicate to viewers to help them realise the power of dictatorship. Photos also convey how people try to free themselves from that power. There are many of these freedom movements. I like to create photos to make fun of the junta government, to reduce their status and image. I do not have enough power to make change, but this is what I can do," concluded Vinai.

"The People's Road k.m.0" runs at VS Gallery on Narathiwat Ratchanakharin 22 until March 27. Admission is free. For more information, go to https://www.facebook.com/VSGalleryBangkok.