published : 21 Mar 2022 at 05:22
newspaper section: Life
writer: Suwitcha Chaiyong
In the middle, Sannokura Highland and on the right, Enzoji Temple.

When visitors look through one side of the windows at Arnek Pasong Building in Chang Chui, they can see a spectacular winter mountain landscape in the small town of Nakanosawa Onsen, in Fukushima prefecture in Japan. Meanwhile, other sides of the building display different scenes of photos taken during the winter in Fukushima by artist Wasinburee Supanichvoraparch. The exhibition, "Fukushima", showcases photos of tourist attractions, such as Ouchi-juku Village, Tadami River and Akabeko Statue, as well as, other destinations that Thais are not familiar with.

To resemble the atmosphere of Fukushima's winter, numerous small foam balls fill the floor, allowing visitors to imagine the thickness of Fukushima's snow during winter. The exhibition is not complete without Wasinburee's iconic ceramic sculpture I-Jud or Dots Dog, which represents his hometown Ratchaburi and his background in ceramics, as a third-generation owner of Tao Hong Tai Ceramics Factory.

In 2020, photos taken during the four seasons at Fukushima by Wasinburee were exhibited at Bangkok Art & Culture Centre. This "Fukushima" exhibition focuses on winter photos. Although Wasinburee does not like freezing winter weather, he is fascinated with the picturesque winter of Fukushima.

"When I was in Germany, I did not have many photos taken during winter. The snow looked beautiful when I saw it through my window. In my memory, the atmosphere of winter was gloomy. However, landscapes in Fukushima looked like beautiful Japanese paintings. It was the first time that I took many winter photos," said Wasinburee, renowned artist and ceramicist. 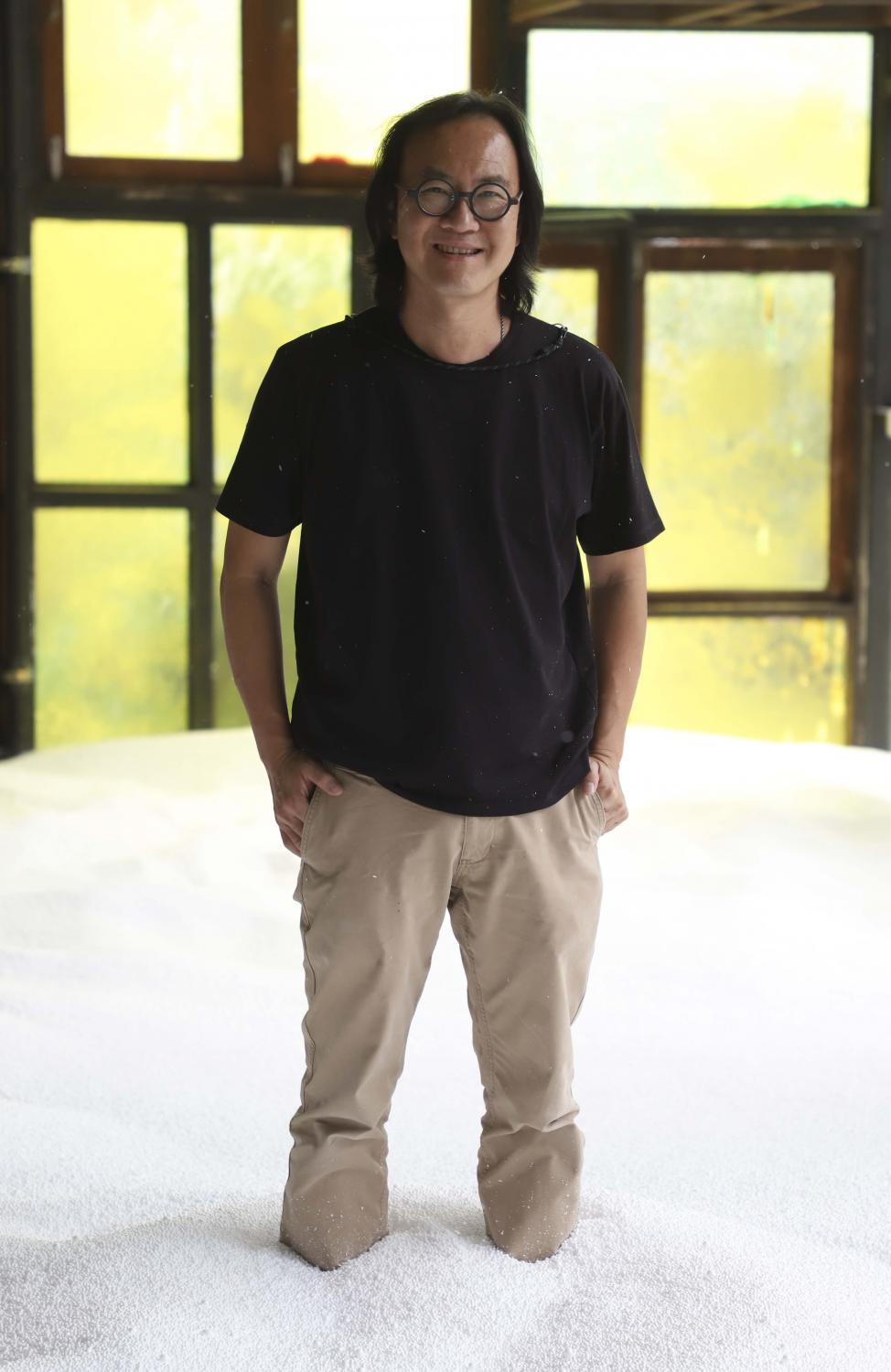 The artist explained that he designed this photo exhibition differently from his previous exhibition. When he saw that Arnek Pasong Building has many windows, he planned to use the windows as part of his exhibition.

"Instead of hanging photos on the walls, I tried to match spaces and sizes of windows with photos. I used several materials to replicate my feelings of when I was in Fukushima. I wanted to feel like I was looking at a winter landscape in Fukushima through the windows. I wanted to feel the ambience of sunlight passing through the windows. I used small foam balls to imitate how I felt when walking through thick snow," Wasinburee said.

People may be concerned that foam installations will have negative effects on the environment, but Wasinburee had thought carefully about it.

"During the first wave of Covid-19, I designed ceramic cups, Cutevid, that were inspired by the kindness of Thais who shared food through 'Pan Sook Pantry'. Proceeds from Cutevid went to Ratchaburi Hospital. Since stuffed dolls are famous in Ratchaburi, the foam balls from this exhibition will later be used to fill Cutevid stuffed dolls. I have already discussed this matter with a factory owner of stuffed dolls. Proceeds of Cutevid stuffed dolls will go to the foundation of Ratchaburi Hospital. Thus, the foam will not be wasted, but will be put to good use," said Wasinburee. 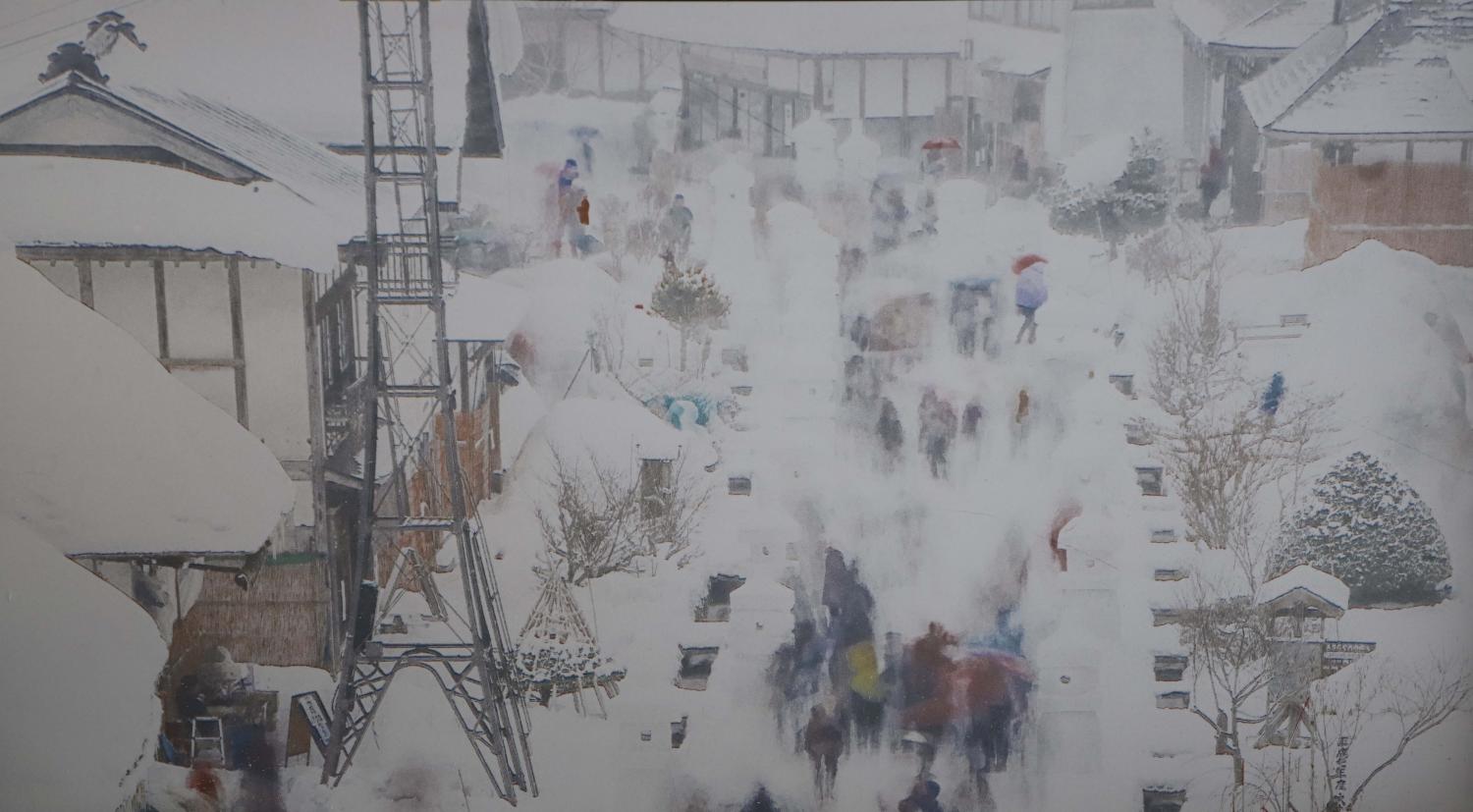 In 2011, people in Fukushima experienced three disasters -- an earthquake, tsunami and a nuclear leak. Due to these three disasters, many people still have negative images of Fukushima. The tourism officials of Fukushima want to restore this prefecture's image and Wasinburee was invited to capture a restored and beautiful Fukushima.

In the exhibition "Fukushima", viewers will see many photos that have never been displayed before as well as photos from a previous exhibition. Wasinburee said that at the first exhibition he showcased photos that had connections with Ratchaburi and himself. He gave an example of the photo of Tadami River First Bridge Viewpoint. At Tadami River, most photographers wait to capture the moment when a train passes over the river.

"Everyone suddenly fell silent the moment before a train was scheduled to pass over the Tadami River. I felt that the silent moment was beautiful. Although the train did not arrive because it had been cancelled, that moment was still beautiful. From that moment, I was thinking about how Thais work. We usually create fireworks so everyone can see its beauty temporarily, but we do not express or show the foundation of things. I decided to exhibit a photo of Tadami River without a train. It represents nature, which is a sustainable beauty, not something temporary," he said. 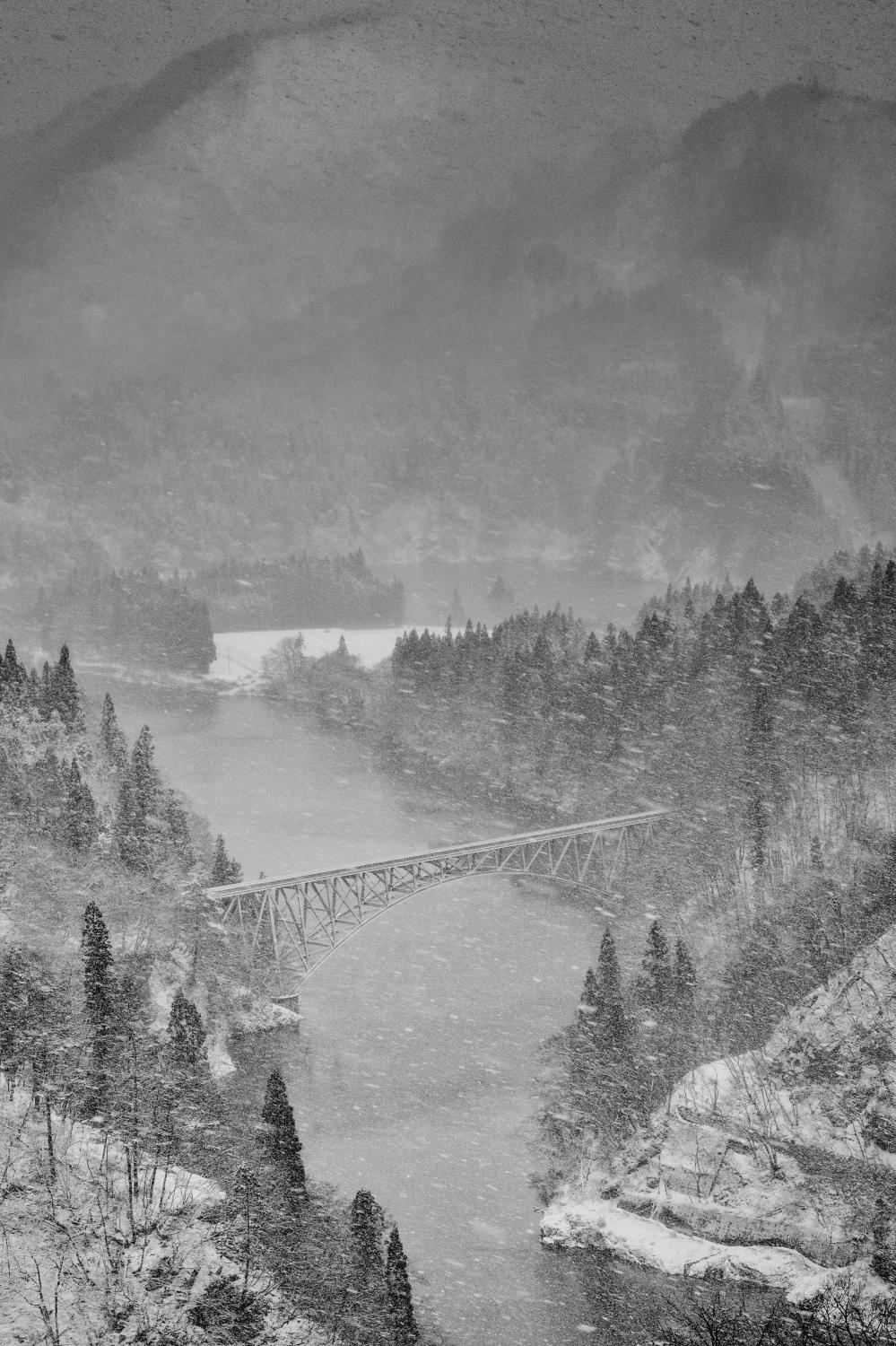 A photo of Ouchi-juku Village, depicting a bird's-eye view landscape of the village, is covered with white snow. In the current exhibition, the photo is in colour while in the previous exhibition, it was in black and white.

"Millions of visitors will come and go, but the architecture of the village will remain there for a long time. Thus, I used a high-speed shutter to create blurry movements of people while the architectural structures of Ouchi-juku appear clearly," the artist said.

Among several winter photos, Sannokura Highland, is the only photo taken in spring. Wasinburee explained that he added this photo to create movement and a feeling of hope. The artist also said during the trips, there were many unexpected events. 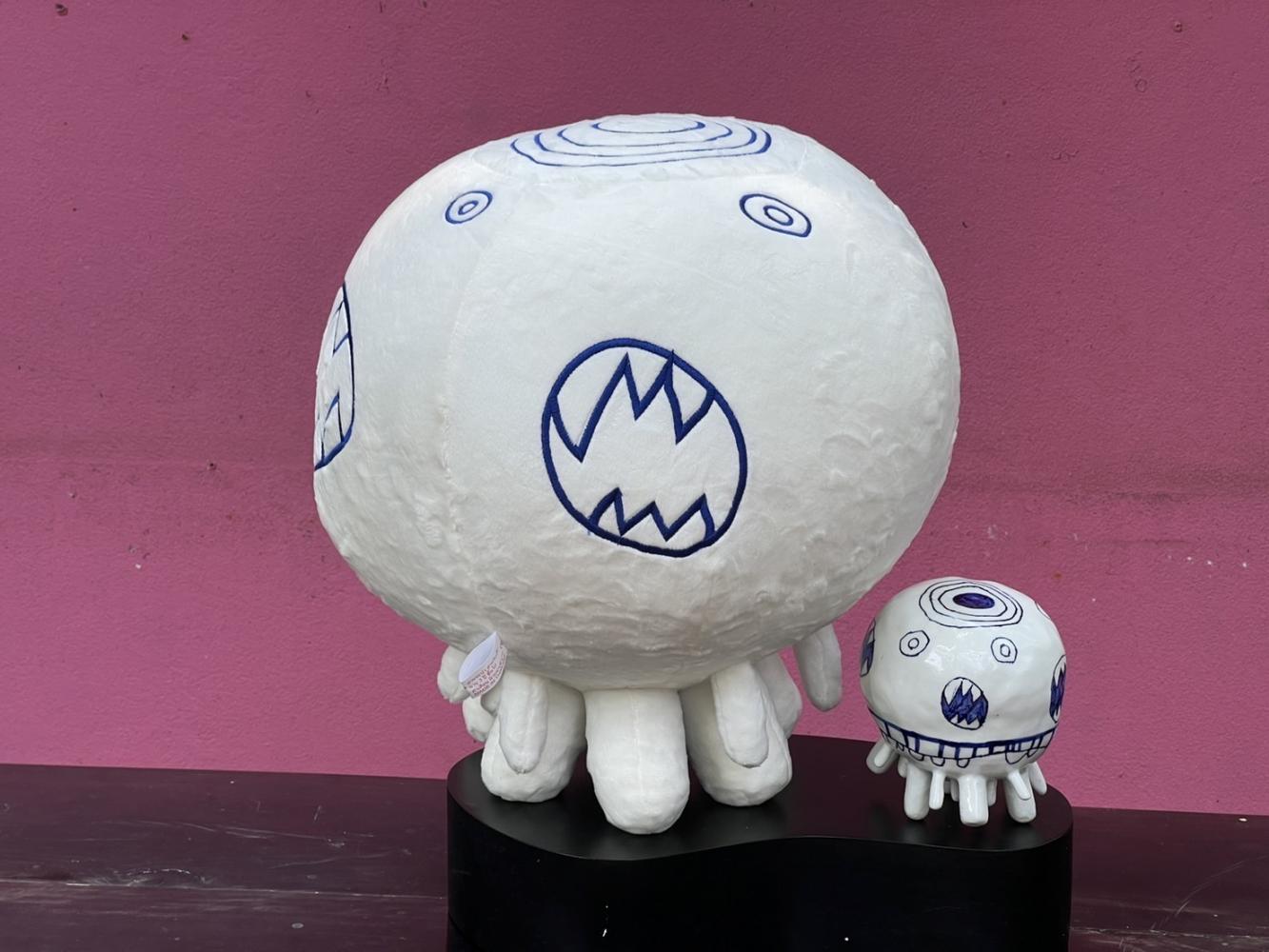 The foam balls from this exhibition will later be used to fill 'Cutevid' stuffed dolls. Wasinburee Supanichvoraparch

"There was no snow when I arrived there the first time to capture winter photos. However, a snowstorm occurred when we went to a bridge. It was difficult to take photos because snow kept falling, but when I have an opportunity, I try to get the most out of it. During spring, Japanese officials wanted photographers to see a huge yellow field of Sannokura Highland, but there was only 10% yellow left in the field. They asked me if I wanted to skip it. I decided to use this opportunity as best I could and took 30 minutes to get the photos," Wasinburee said.

Many people may be familiar with Wasinburee's portrait photo collection, "Rad Din (Pouring Clay)", which shows photos of models who had clay poured on them. The artist said he depicts people through portrait photos in the way that he sees the models and in the way that he wants the models to be. Although Wasinburee can capture landscapes impressively, he said he is not a landscape photographer. 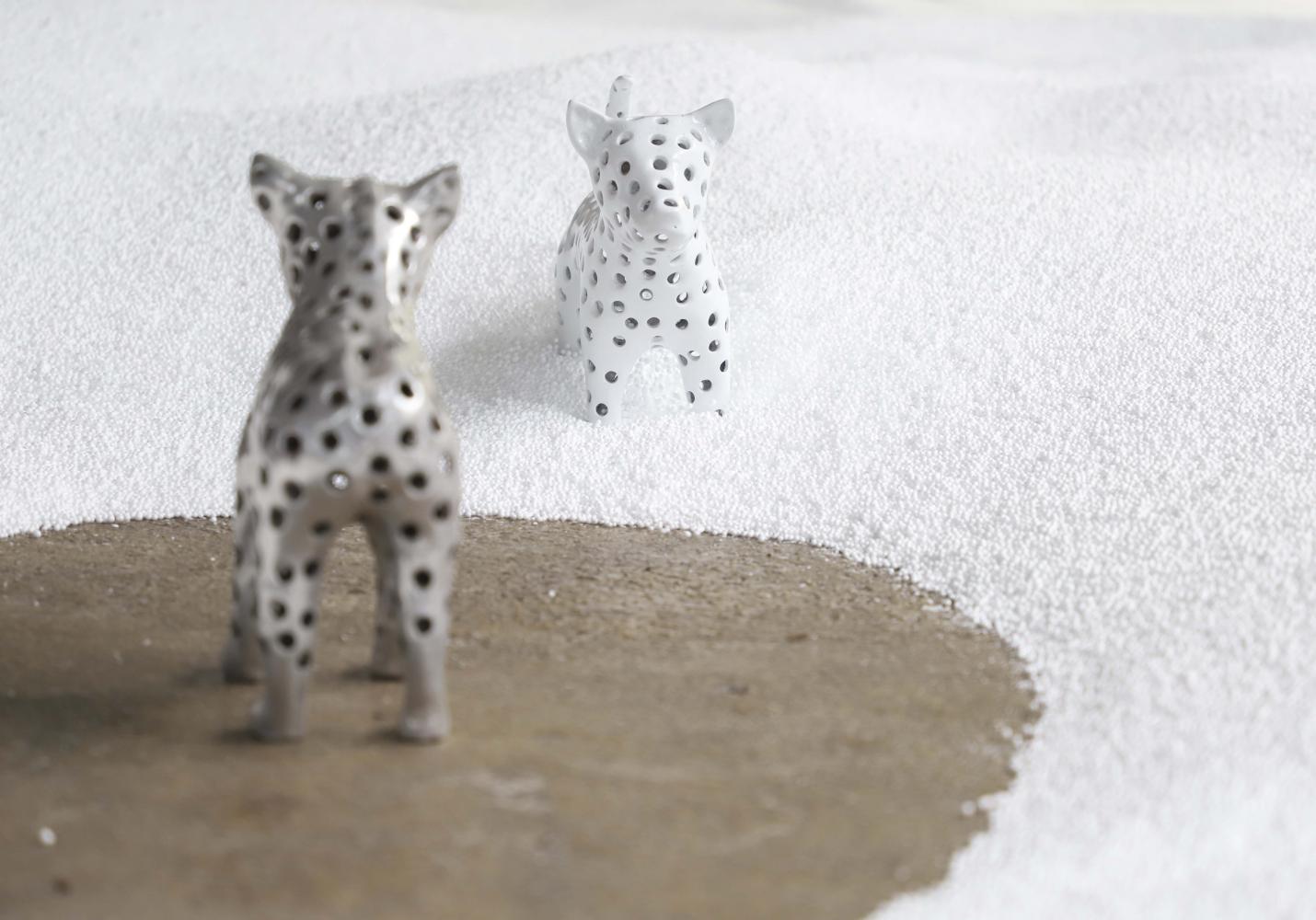 "I try to convey what I see and put my impression into a frame, so viewers will feel what I felt at that moment. For example, when I saw the sun's rays shining through the clouds and onto the mountains, I wanted people to see and experience that moment with me. However, photos with perfect composition cannot compare with the real image," said Wasinburee.

As a photographer, Wasinburee concentrated on capturing significant moments that he did not want to miss. However, at Snow and Fire Festival in Mishima Town, he put his camera down when he discovered something more important. An elderly Japanese male was given the honour to light the hay in a ceremony to celebrate the previous harvest, but he had trouble lighting the fire.

"I saw his troubled face through my viewfinder, so I put the camera away and became a part of the audience cheering the man. Everyone in the ceremony tried to console him since he was obviously disappointed that he could not make the ceremony run smoothly. I was impressed that the community did not focus on their own benefit. The reaction of people in the community was the core of how they moved forward together," Wasinburee said.

Due to his impressive captures of Fukushima, some travellers followed his route to Japan. 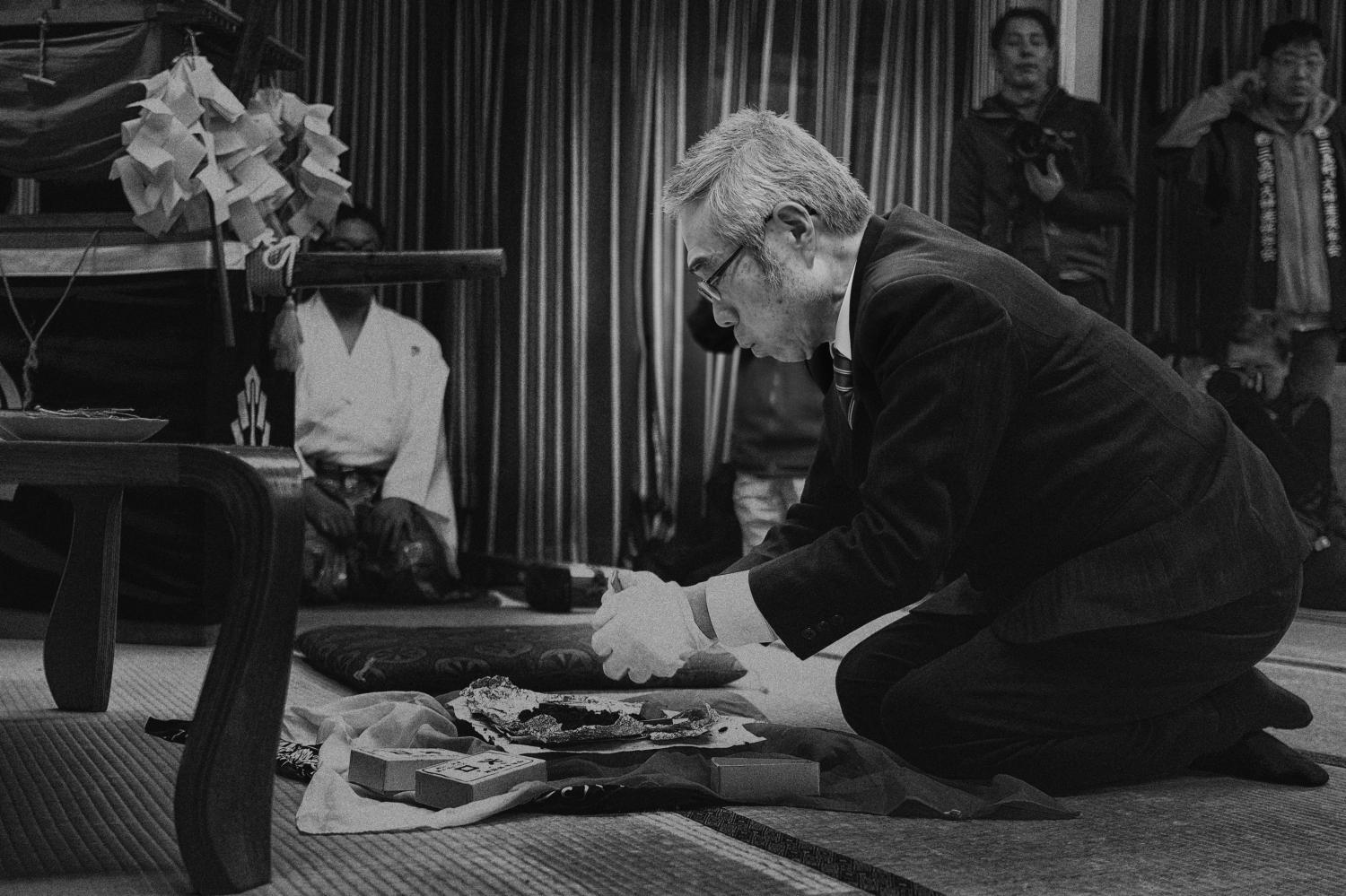 "I did not expect this kind of feedback, but a follower wrote on Instagram that he saw the exhibition and followed my route. One of my students followed me to venues in Tokyo which are not tourist attractions. I hope my photos will encourage people to see Fukushima for themselves," Wasinburee said.