'Mutual Friends' brings together the classic and new

Mid-Charoen Krung, hidden in the modern classic architecture of Central The Original store is a colourful exhibition "Mutual Friends", by Viput Asawavetvutt, Thai illustrator and designer, and Warrasruang Samuttaphan, CCO and co-partner of Balloon Art. An exhibition full of liveliness, it features not only modern and fun illustrations, but also inflatable characters that take you by surprise as soon as you enter the radiant, playful space.

What is this exhibition about?

Viput: The main theme is Charoen Krung Road. It started from the location and it has a long history, it's even the first road in Thailand. I have made lots of memories here while driving through it. I see lots of people living their lives along the two sides of the road. So, I wanted to bring the little stories that I saw and tell them through the exhibition. I believe that knowing someone doesn't mean that you necessarily have to have seen them before. I want people to come into the space, see the pieces and think back to stories that they remember the location by. 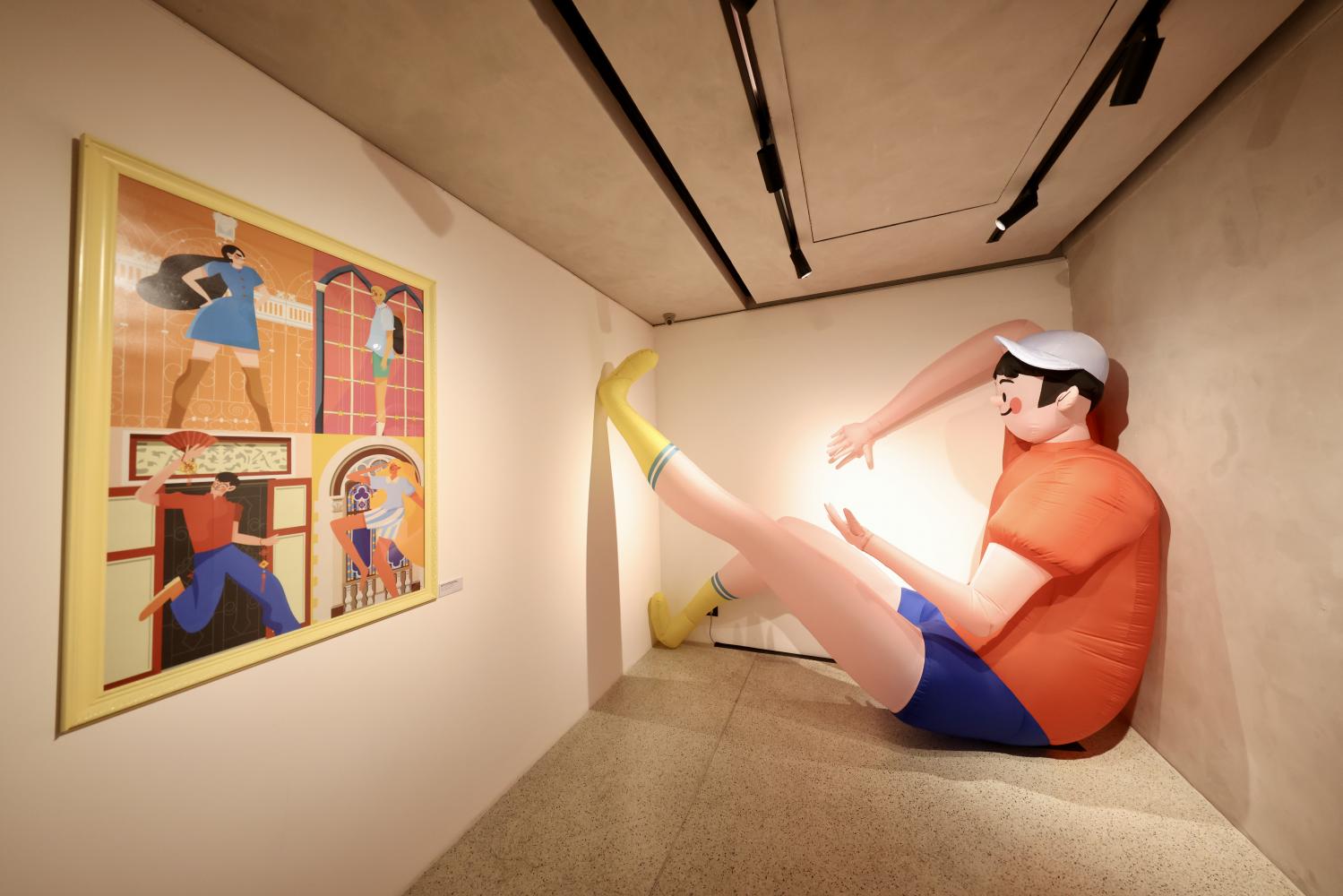 Central approached Warrasruang to work on this exhibition with me. It's the first time that we work together. It's a very special collaboration because I have been drawing for many years but I've never ever seen my characters being turned into three-dimensional figures, I've always been working with two-dimensional stuff.

Why is it called 'Mutual Friends'?

Viput: We want people to come to the show, to the place that we've been driving past. We might meet someone that we've been thinking about or places that we've been to. If you walk around the show you'll see images that tell the stories of Charoen Krung. My intention is to depict Charoen Krung as a classical place, but within that classiness, there are always new things popping up. That's why the pieces convey elements of modernism and vintage. We show this idea throughout the exhibition from the illustrations to the frames. If you look closely, the frames are specially made, one half brings a vintage feel with the louis (a colloquial term for baroque motifs) pattern and the other half brings a modern feel with the clean and simple lack of pattern. They've also been repainted in fun colours to represent the new generation but also to represent Charoen Krung as an old entity that we want to preserve. Warrasruang helped in making the three-dimensional parts and decorations, which I feel are very cute, modern and suits my work very much. 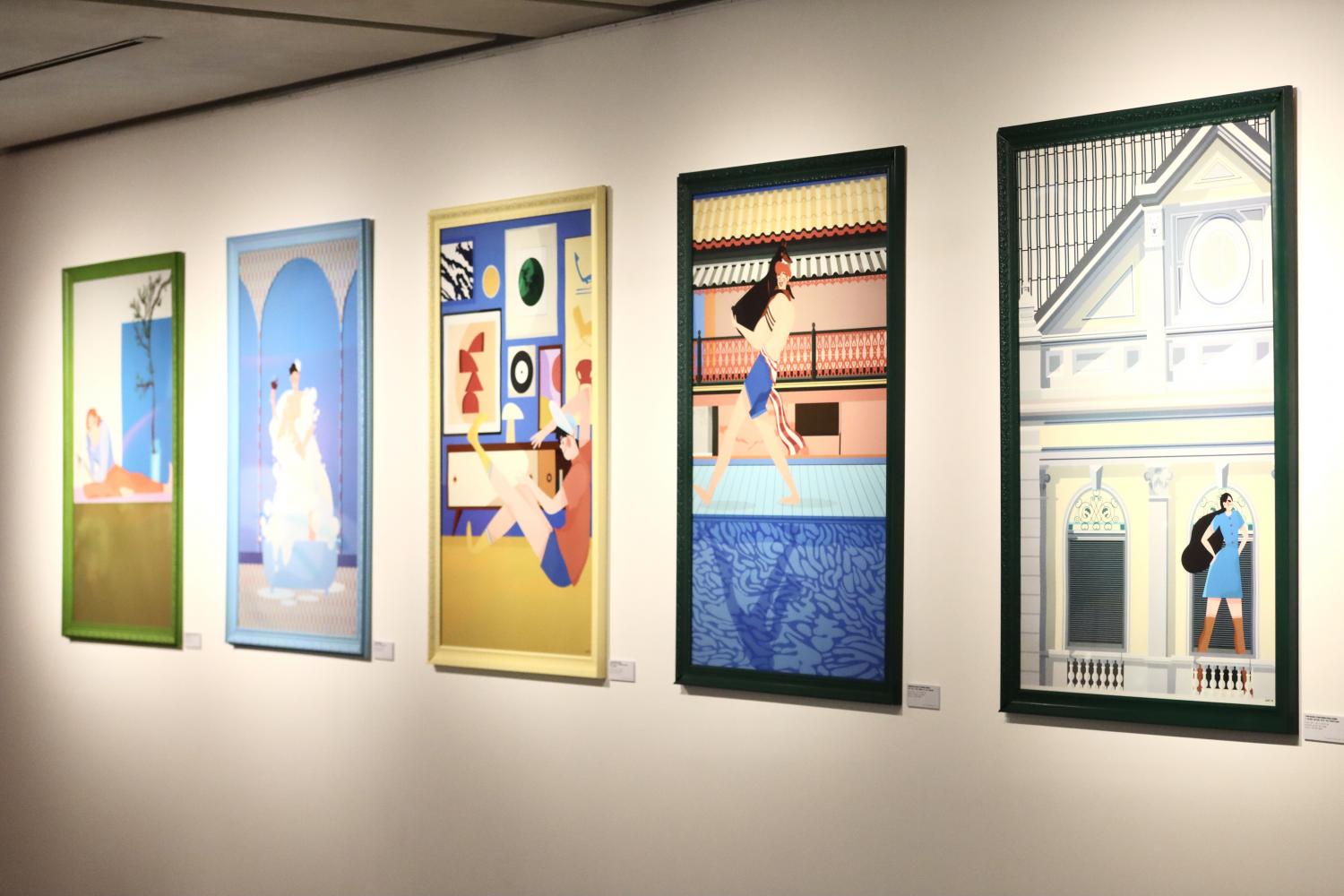 I talked about the main concept with Warrasruang. The Balloon Art team helped explore it and added a few touches that make it all easier to execute. They make the work more accessible and understandable, too.

Viput: I presented the concept to the Central team because this is a three-way collaboration, not just me and Warrasruang. Then we designed what we wanted the exhibition to feel like. We let everyone do their jobs under the same vision, but we tried to let everyone's creativity bloom as much as it could.

Warrasruang: There are a few designs that turned out to not work very well with Balloon Art, so we needed to adjust a little bit along the process.

What was it like working together, were that any challenges?

Warrasruang: It went very smoothly. Viput designed the imagery for the two-dimensional elements and I turned them into three-dimensional elements. There is, however, a special piece in the front that has an added movement so it looks like the boy is sleeping soundly in the corner of the room. 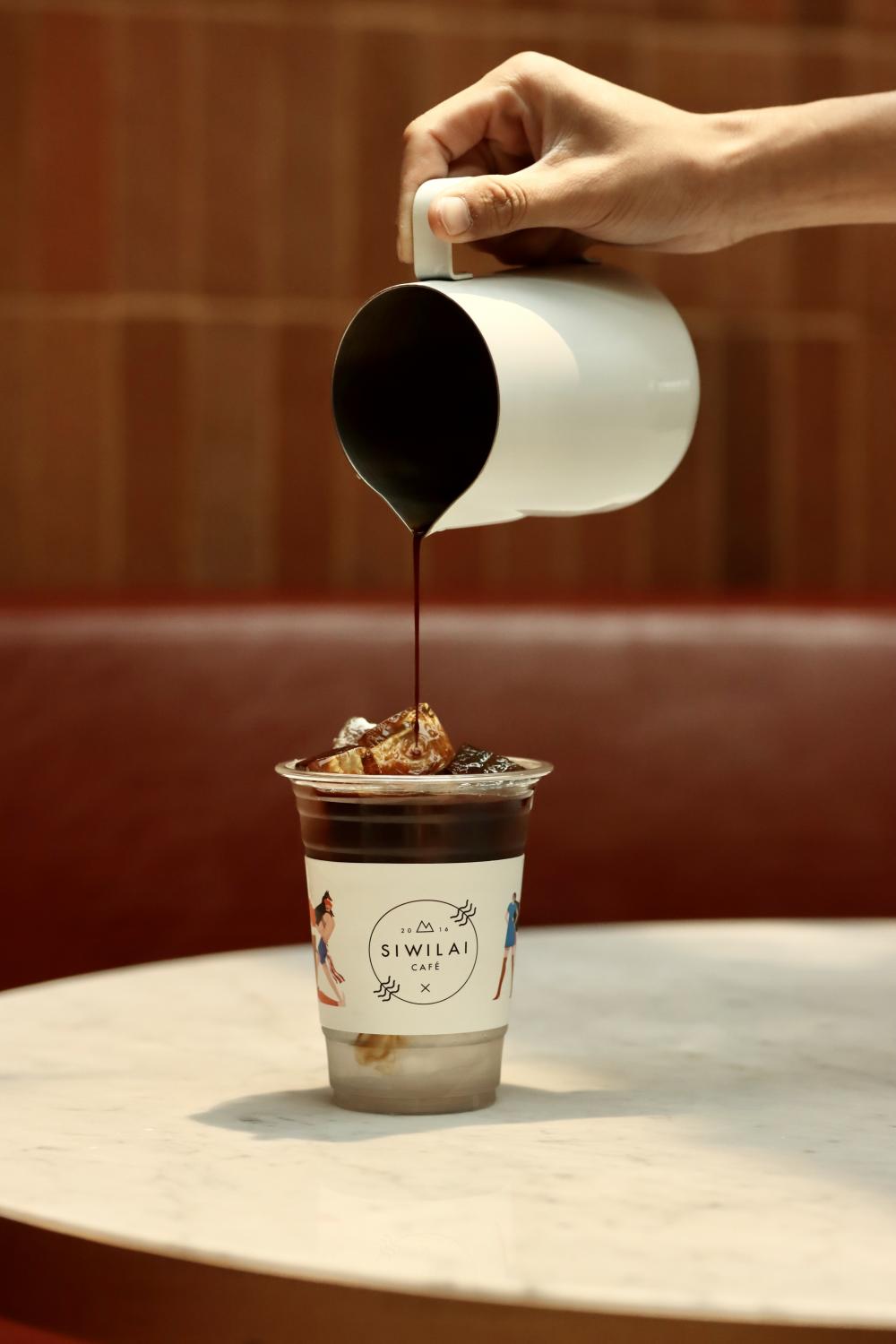 Viput: It's actually quite a vast concept. This piece of work is a collaboration as the moving mechanics of the figures are all Warrasruang's ideas. I was very surprised when I saw the mock-up for the first time. It's not that it can be done right away with just an idea, there's a process of trial and error to get there.

What are the highlights of the exhibition?

Viput: Other than the 12 illustrations there's also the balloon art. There are also new techniques used while displaying the traditional feel of Charoen Krung. There are details like the tiles that have a long history with this place and the character designs in the illustrations that add touches of modernism to it. There's also a free leaflet with stickers, too. We want people to come and feel comfortable in the exhibition, have fun and enjoy it. We want people to smile and send them positive energy, that would already be a success.

'Mutual Friends' is on display until May 8 at Central The Original Store along with the 'Coconut Espresso', a specially-created drink, which can be found at Siwilai Café Charoen Krung. There are also T-shirts with two exceptional prints designed in accordance with the exhibition for those who wish to live their life in art. Visit fb.com/central.theoriginalstore.