Despite a two-year hiatus, Nutchanat La-ongsri commanded a stage with unwavering power. Donning a large headpiece, she pulled on a white costume with a red strap tied on her upper body. Her back rose up like a bird's tail. She pressed her hands in front, showing silver bracelets and nail tips. After a wai kru ceremony, she staged a play in nora kaek, the dying breed of performance art from the Deep South.

In the story, she played the role of a leading actor engaged in the whirlwind courtship of two actresses, who struggle to get free of his chase. While they were twirling around the stage, the band alternated between fast and slow tempos. Nora kaek performers spoke fluent Melayu and Thai for the local audience, mostly Muslims and Buddhists, reflecting religious diversity in the three southernmost provinces.

Based in Narathiwat, her troupe Nora Kaek Song Pasa Udomsil S. Por Nu is one of the last bastions of the rare art form. It joined a two-day celebration at Wat Pha Kho in Songkhla last month, the first performance after the coronavirus pandemic. The event was held by the Media Centre for Arts and Culture, Thai PBS, after nora was awarded intangible cultural heritage status by Unesco last December. 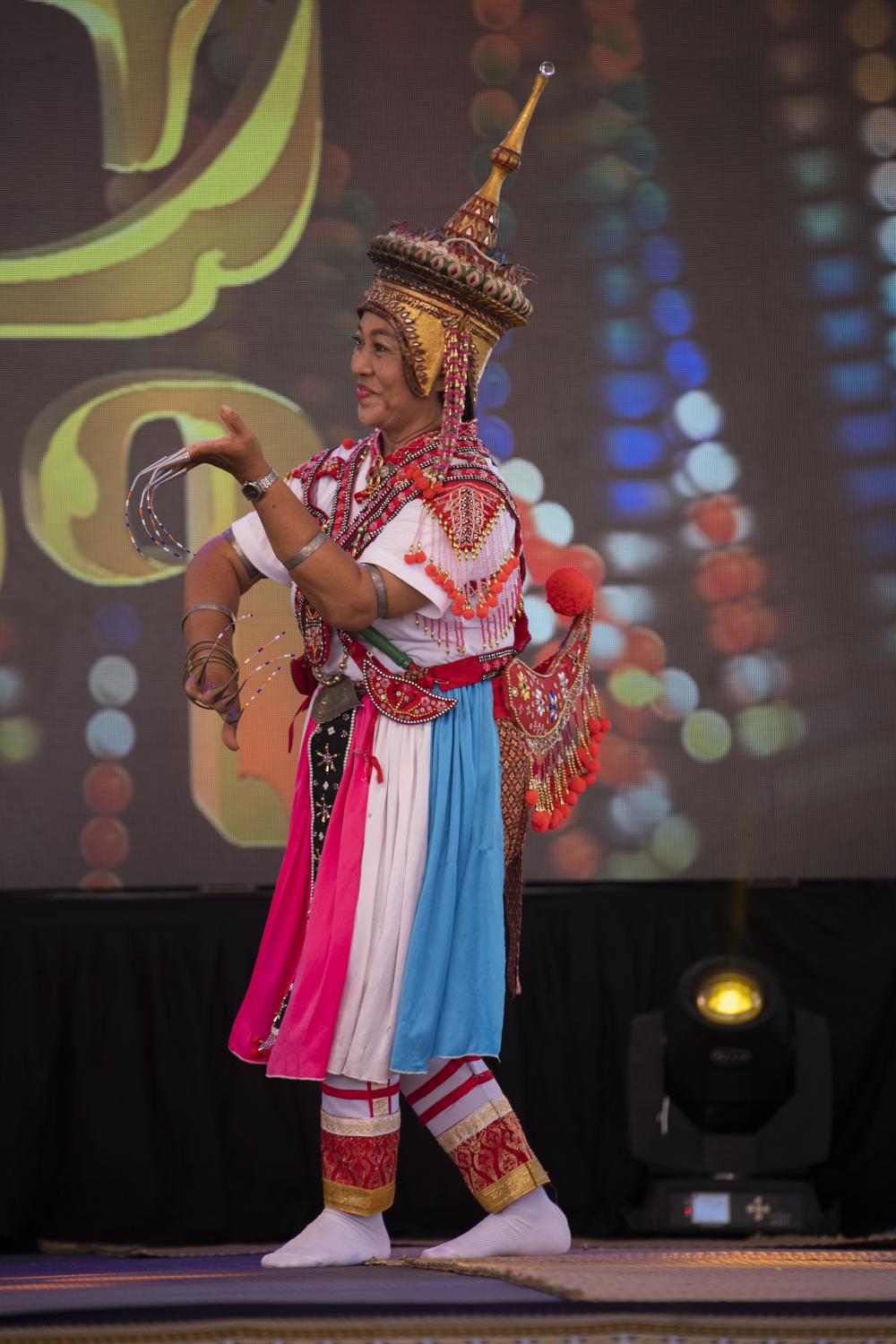 Nora kaek is influenced by nora and mak yong, a dance drama common for Muslim Thais in the three southernmost provinces. Experts said nora kaek is an adaptation of nora in Muslim communities. Performers must speak Melayu and Thai. Their dress, instruments and posture are different from general nora.

While this unique art form plays a crucial role in promoting the relationship between Muslims and Buddhists in the Deep South, three factors -- the lack of heirs, the rise of new forms of entertainment and unrest -- contribute to the decline in its popularity and the possibility of vanishing. 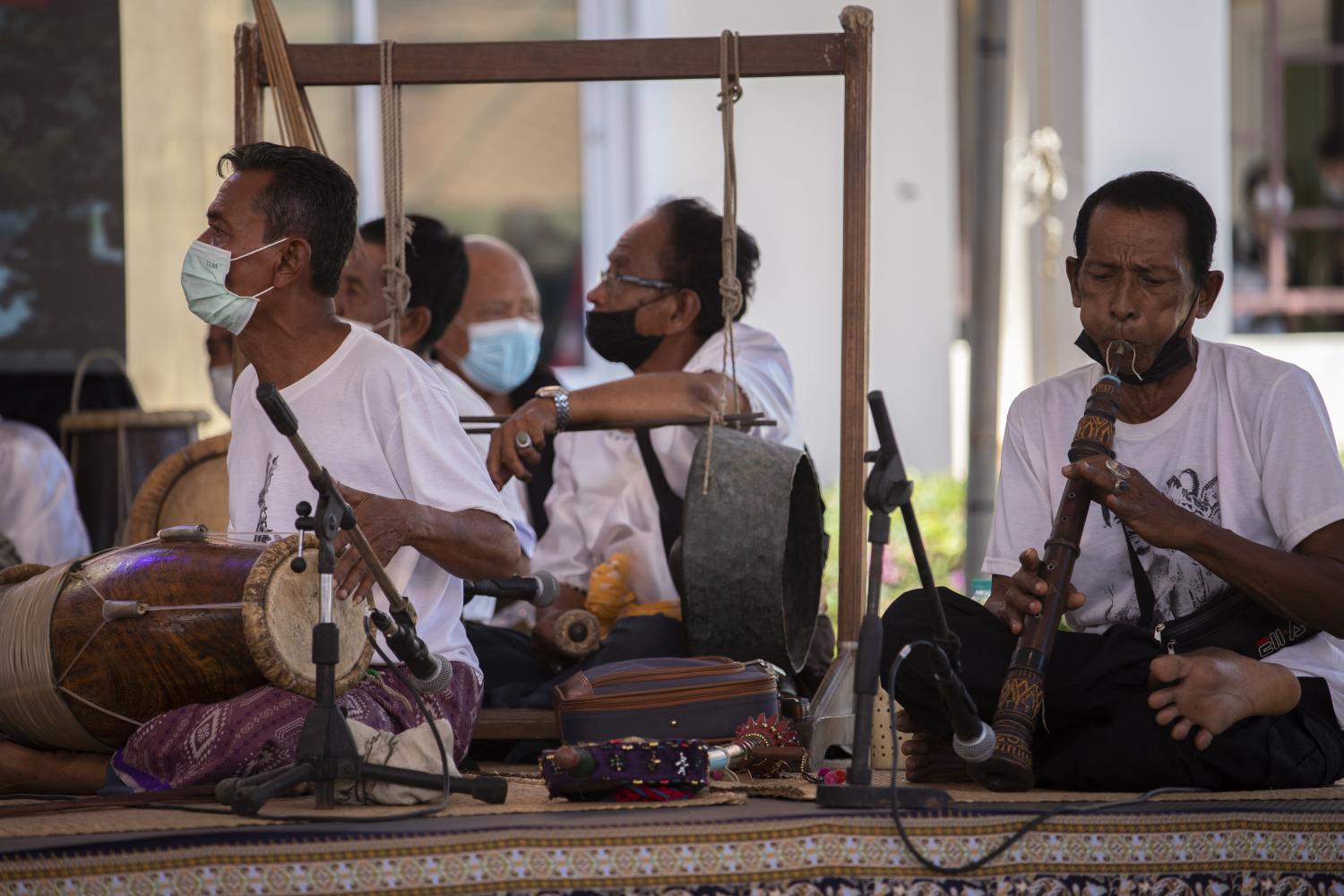 After the performance, Nutchanat, 53, the fifth-generation descendant of the troupe, carefully took off the heavy headgear, or seut, that belonged to her founding ancestor two centuries ago. The 3kg wooden crown is on its last legs. She will have it repaired and will use it in ceremonies only, as they are now harder to come by.

"Normally, a leading actor or pra is male, but I crossdress on the stage," she said. "It is about courtship. I ask a leading actress or nang, 'Shall we go see wild bananas on the mountain?', but she plays hard to get. There are many other plays. This is followed by a nora rong kru ceremony."

The ceremony is a ritual of paying respect to nora spirits, including ancestors and teachers. They will visit the ritual stage and possess living descendants. It is held to show gratitude, fulfil vows and give offerings, and perform rites, such as tat jug (cutting the topknot) and khrawp seut (crowning).

Nutchanat knows her lines by heart because she has performed them from an early age. When she was young, she once had such a headache that she could not go to school. Even doctors couldn't cure her. In hindsight, it was a sign.

"In the nora rong kru ceremony, ancestral spirits said via a medium that they chose me to be the next heir [of nora kaek]. I accepted it on condition that my headache would go away. I gradually recovered. Since then, I have performed with my father and relatives in the troupe," she said. 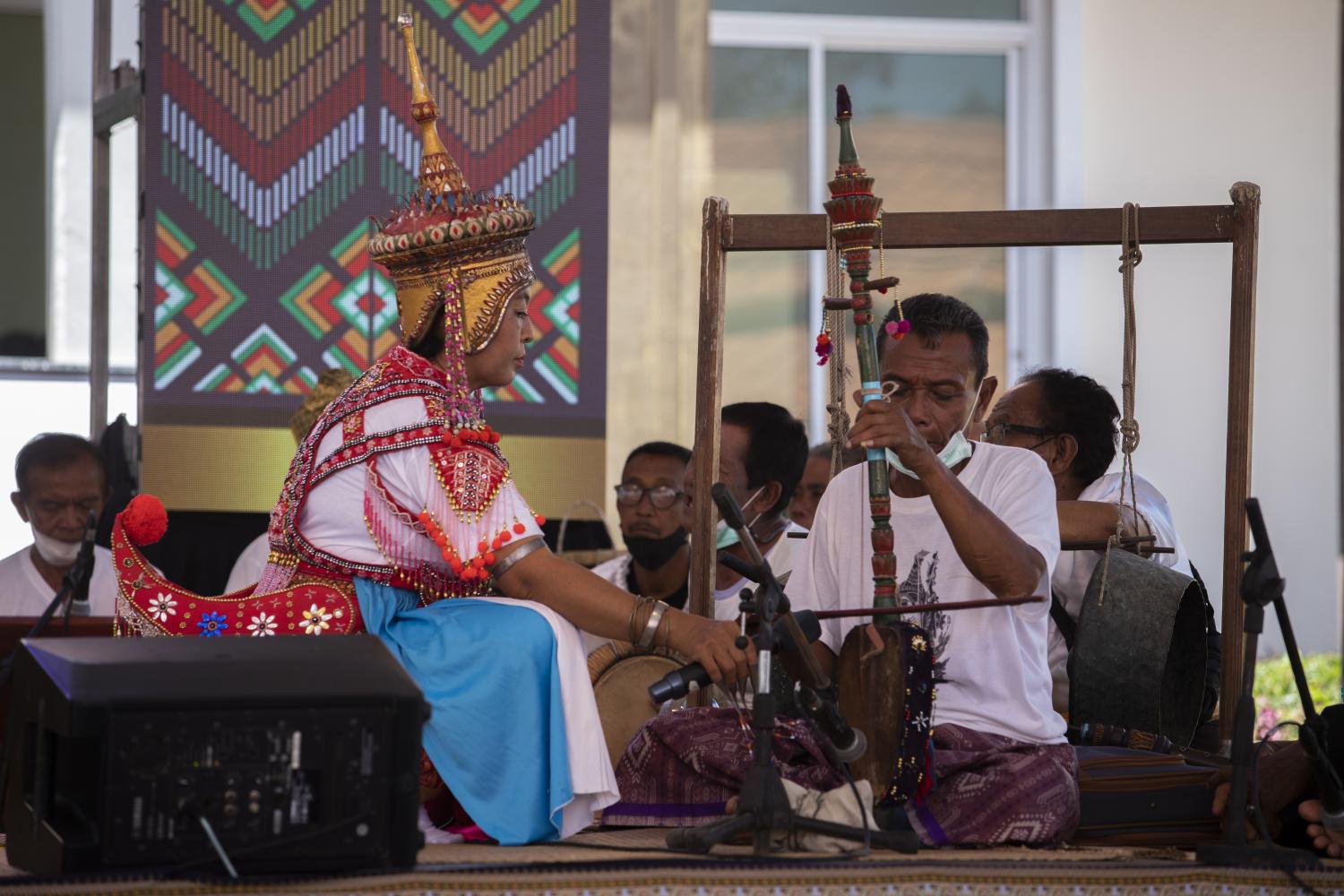 It was in her 30s that her father, Udom Kaewwicean, eventually passed the baton to her while she was working on a rubber plantation. At the time, she remained hesitant, but only family members can inherit nora kaek because they have to take care of the instruments, and especially the headgear. "Initially, I performed in my village only because I had to look after my family. When my sons grew up, I told my husband that nobody would inherit it because my children are unlikely heirs. My nephew now stands a chance because he has performed and studied it [at university], though he can't speak Melayu," she said.

Nutchanat said finding an heir to take the helm is the most serious challenge because it requires bloodline succession, passion and practice. She has taught outsiders, but they come and go. As far as she knows, there are only three nora kaek troupes in Narathiwat. And veteran musicians are very hard to find. The pandemic was another nail in the coffin.

"It was difficult for troupe members to gather because some of them have their own bands. We have to find a convenient time to deliver a performance, let alone a nora rong kru ritual lasting up to three days. I couldn't find anyone in the village because they already passed away," she said.

Mayateng Samoh, a musician for the troupe, echoed the same view. He has played music from a young age because his father was in charge of the nang talung (shadow puppetry) troupe. He has played drum for Nutchanat's band since her father's generation.

"Musicians are fading away because there are fewer performances. A rarity. When they play together, even veterans are out of tune. Novices can perform only a few songs. Nora kaek may vanish," he said.

Mayateng, whose ancestors came from Malaysia, said nora kaek helps forge ties in communities. Despite religious differences, performers can work and live together in a nora theatre. In fact, they spend more time with the band than family members. Meanwhile, a local audience, be it Muslims or Buddhists, can enjoy the performance.

"If it weren't for me, nobody would beat the drum. Anyone who loves folk art values it. It is my root. The Malay Peninsula is my home," he said. 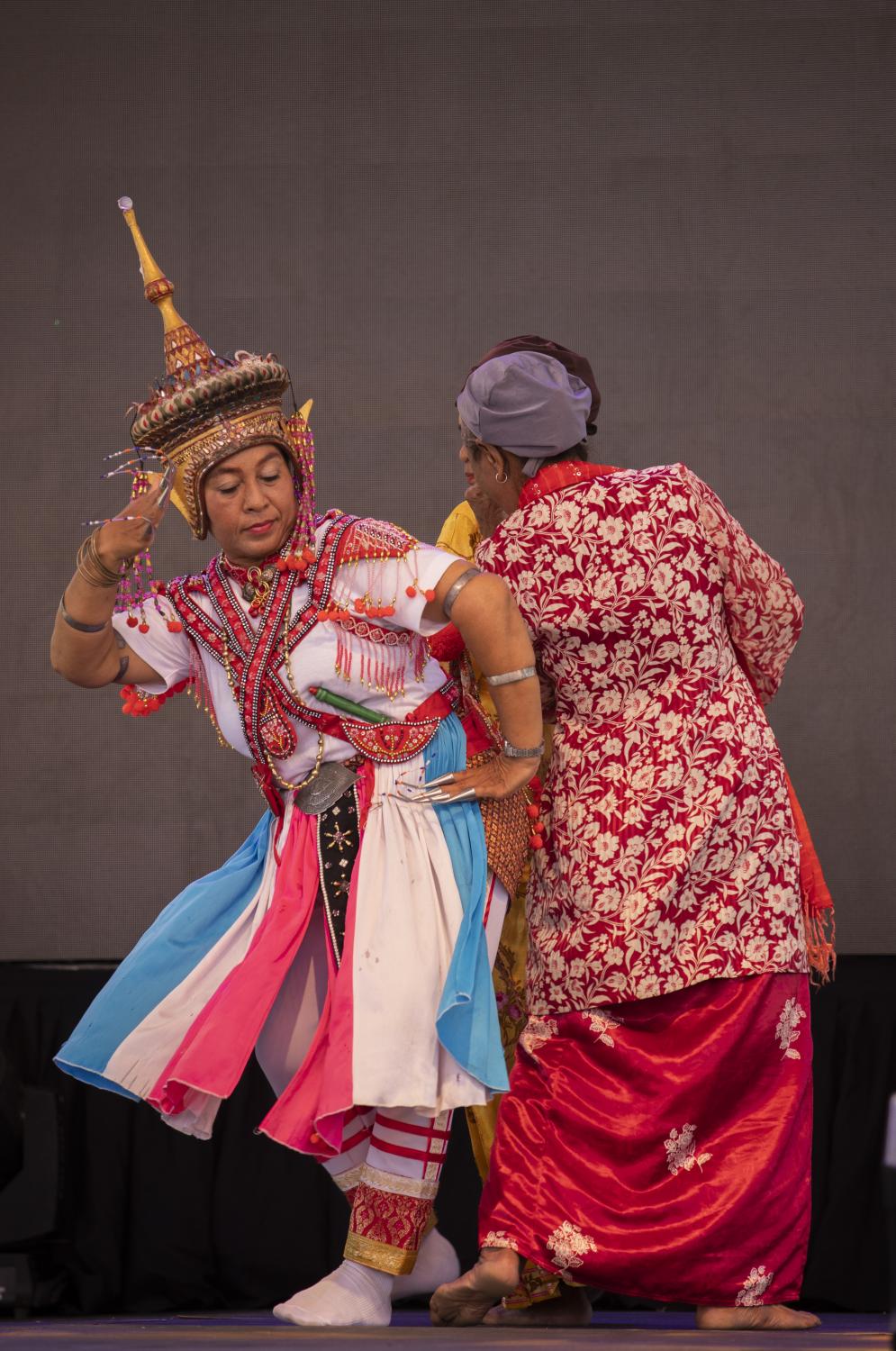 The dancing on the wall

Nutchanat hopes that her nephew, Arnon Wanphet, will carry the long tradition forward. He is now a lecturer in Thai classical dance at Phranakorn Rajabhat University. He conducted research on the genealogy of his family's nora kaek troupe and had it published in the Journal Of Fine And Applied Arts, Khon Kaen University, in 2017.

"It is impossible to pinpoint when nora was adapted, but it resulted from the context in which the majority population is Muslim Thai. Mak yong is their popular performance. It bears closest similarities to nora," Arnon said. "It is said that Nora Srimai founded nora kaek. My ancestor used to perform with him."

Arnon said nora kaek helps promote religious coexistence and social cohesion. In his nora theatre, Muslims salute or wai senior Thais. Before they perform, they face a palai (altar) and prostrate in front of the headgear. Meanwhile, nora kaek is the means by which people, despite religious difference, can inform and entertain themselves.

"Nora kaek is the way of life. It is performed in sunat [male circumcision], bu cha tung [worship of the goddess of rice], ordination, and nora rong kru ceremonies. However, many factors contributed to the decline in its popularity," he said. 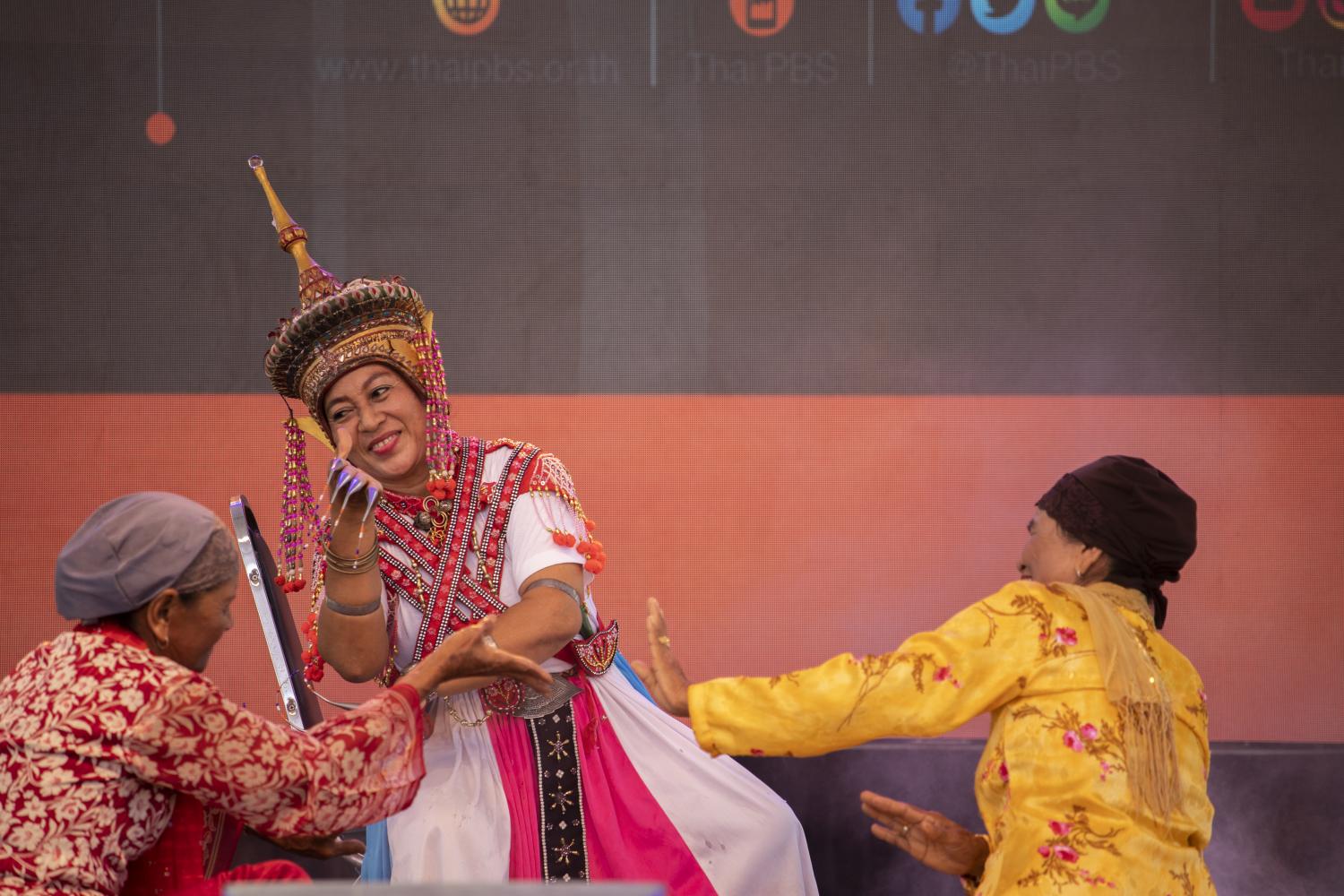 Arnon said migration can interrupt the bloodline succession of nora kaek. For example, he grew up in Songkhla's Hat Yai and pursued his studies in Bangkok. He is a teacher, not a professional nora kaek performer, but he returns to Narathiwat to perform it in an annual ceremony.

In addition, nora kaek old-timers would rather preserve their folk tradition than adapt it for shows, like those in the upper southern region. With the advent of other forms of entertainment, its popularity has waned. Finally, unrest in the Deep South led to a massive exodus. It was simmering while Arnon was conducting research.

Arnon said while original nora kaek is still found in northern Malaysian states, it could become extinct in Thailand's three southernmost provinces. Very few troupes are performing nora kaek in Narathiwat. Despite conservation groups, members could not speak Melayu. Meanwhile, troupes in Pattani have made adaptations, including more Thai-style elements.

"Schools in the Deep South should put nora kaek on the curriculum. Moreover, researchers should dig into it. Phatthalung and Nakhon Si Thammarat Colleges of Dramatic Arts are examples of those producing art theses and making nora kaek more recognised. Recently, videos have been posted on social media, like TikTok," he said. 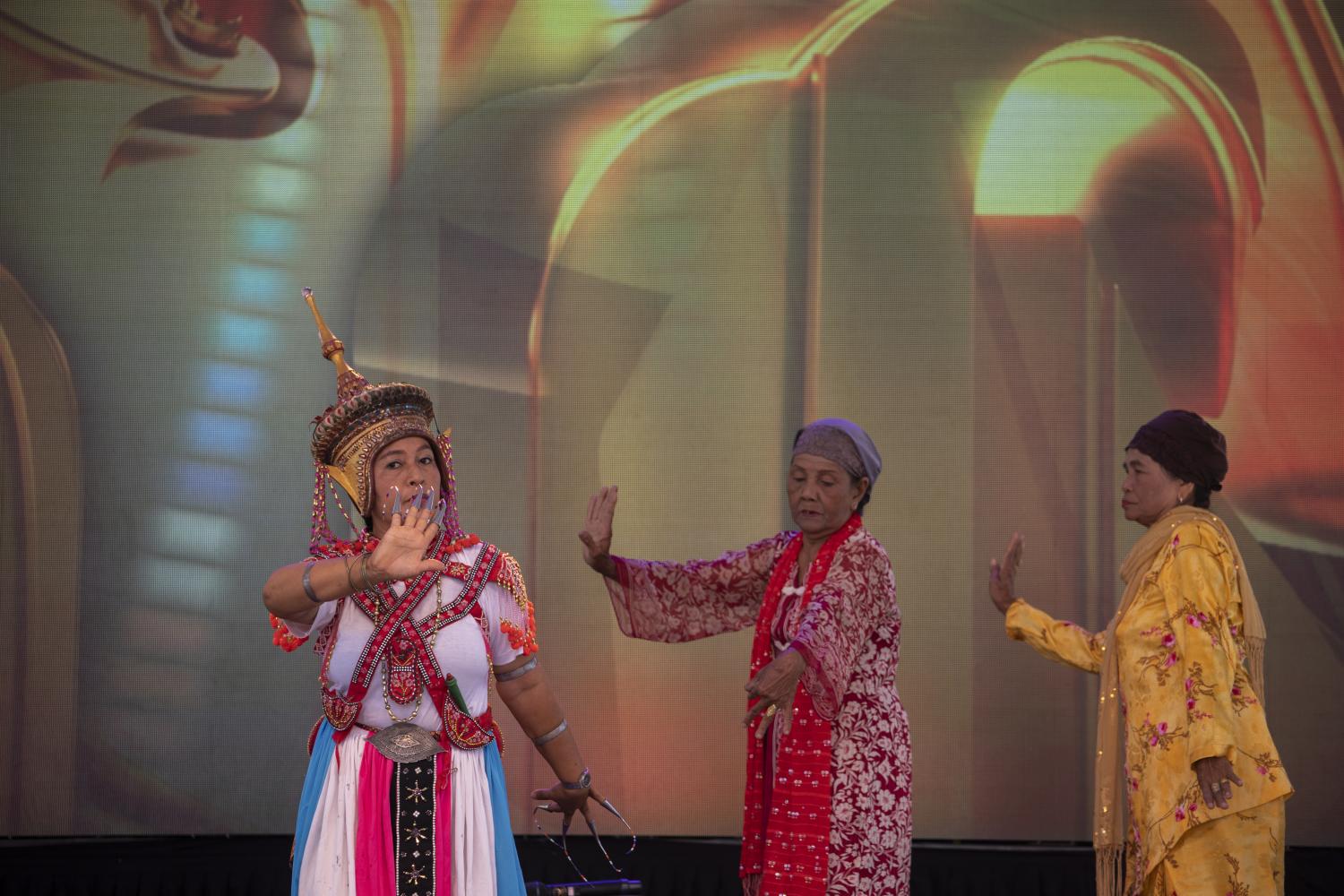 Pum Jiradejwong, a local nora expert, said most leading performers in the Deep South are female because there is no male successor. Bloodline succession is a constraint because not every family member takes an interest. If outsiders are let in, nora kaek will survive. Universities can play a crucial role in preserving the rare southern art form.

"For example, Thaksin University has put it on the curriculum and produced thousands of practitioners, making it more sustainable," he said. "With further support, nora kaek will go far. Don't worry about the language. It is diversity. Nowadays, kids are singing Korean songs."