Three Thais reveal their interpretation of 'a beautiful life' and the inspiration behind their creations. 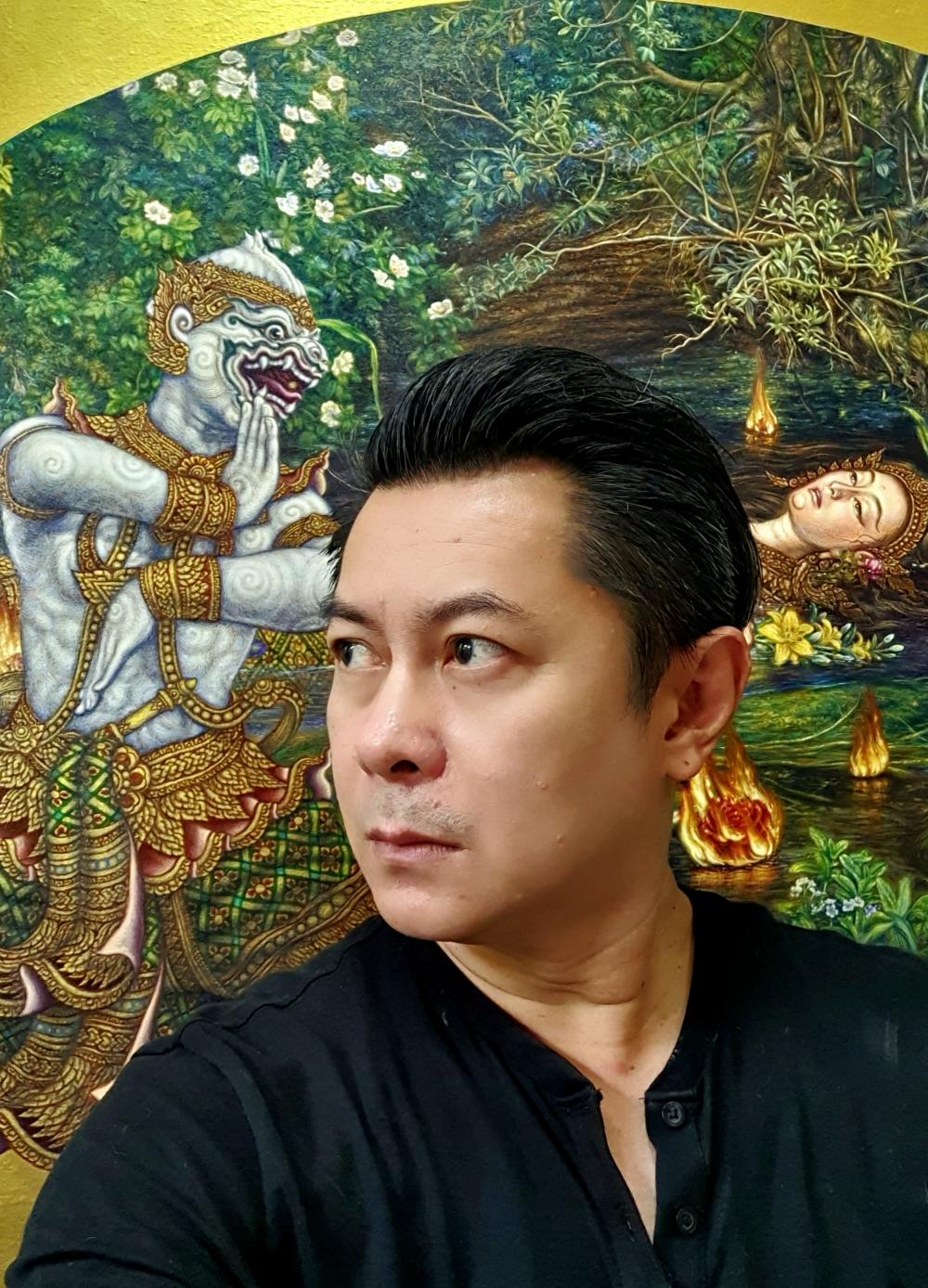 In the midst of Covid-19, economic hardships and unpleasant politics, staying positive can be a tough challenge. To bring a positive vibe back to society, Number 1 Gallery organised a group exhibition titled "Life Is Beautiful". Putting together the works of eight artists, the exhibition serves as a large-scale movie production that portrays different thoughts and diverse interpretations of "life".

The exhibition title, "Life Is Beautiful", reminded Jirapat of the movie with the same title which portrayed the Holocaust during World War II. At the end of the movie, a Jewish father told his son to stay in a locker quietly. The son thought they were playing a game and that he would win a tank if he succeeded. When the son came out from the locker, he saw an Allied tank and thought he had won the game. The ending scene inspired Jirapat to create 1000 Points, A Gift Of Faith, which is a painting of a tank tied with a huge gift ribbon. 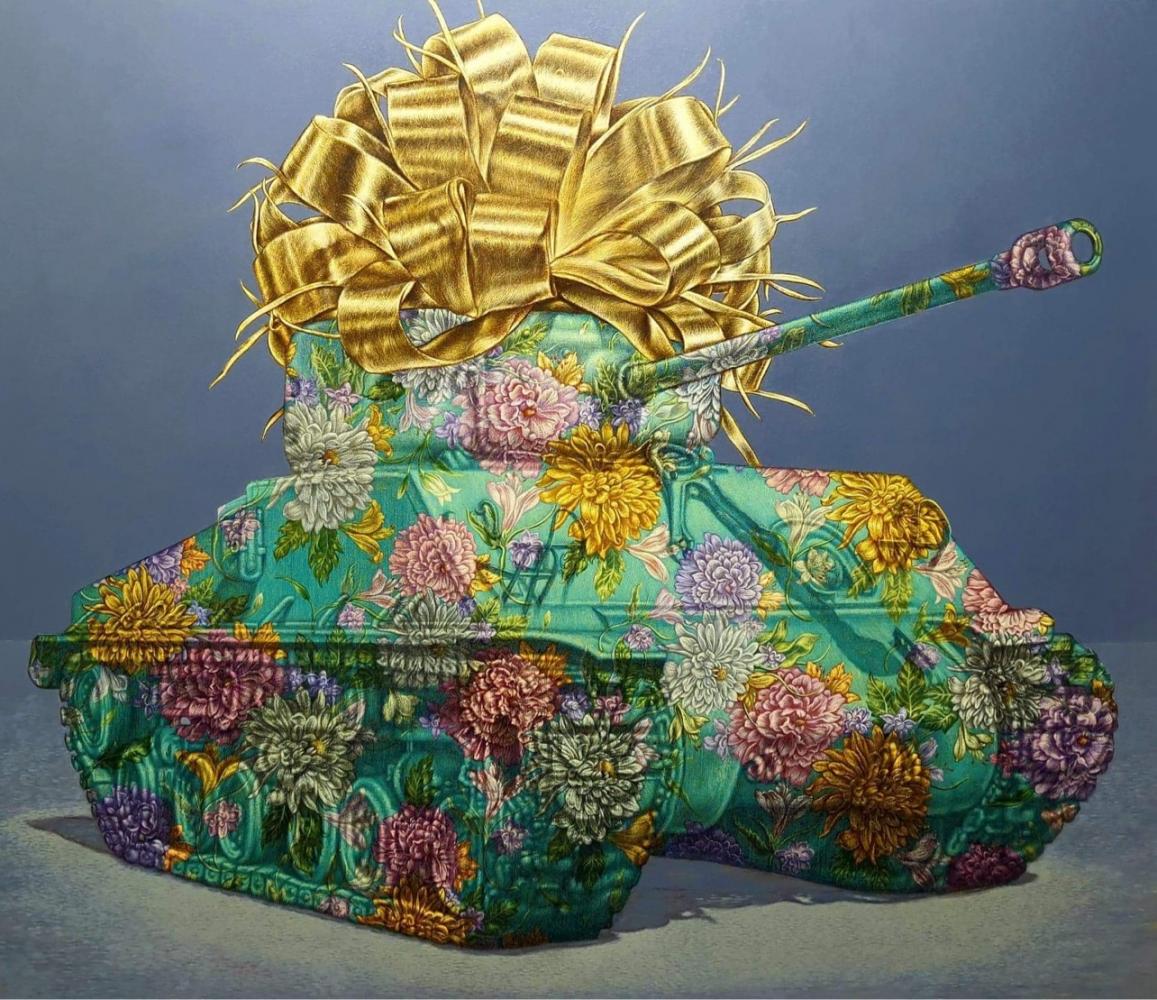 "I visualised the picture of a tank with a gold ribbon on top when I saw the exhibition title. Viewers fall in love with the father in the movie because this character always gives people in concentration camps positive thoughts. He does not lose hope. People may have negative thoughts when seeing tanks, but in war, allied tanks help people and bring hope. I also added three flowers to the painting. While chrysanthemum means optimism and faith, carnation means celebration and the lily refers to naiveté," Jirapat explained. 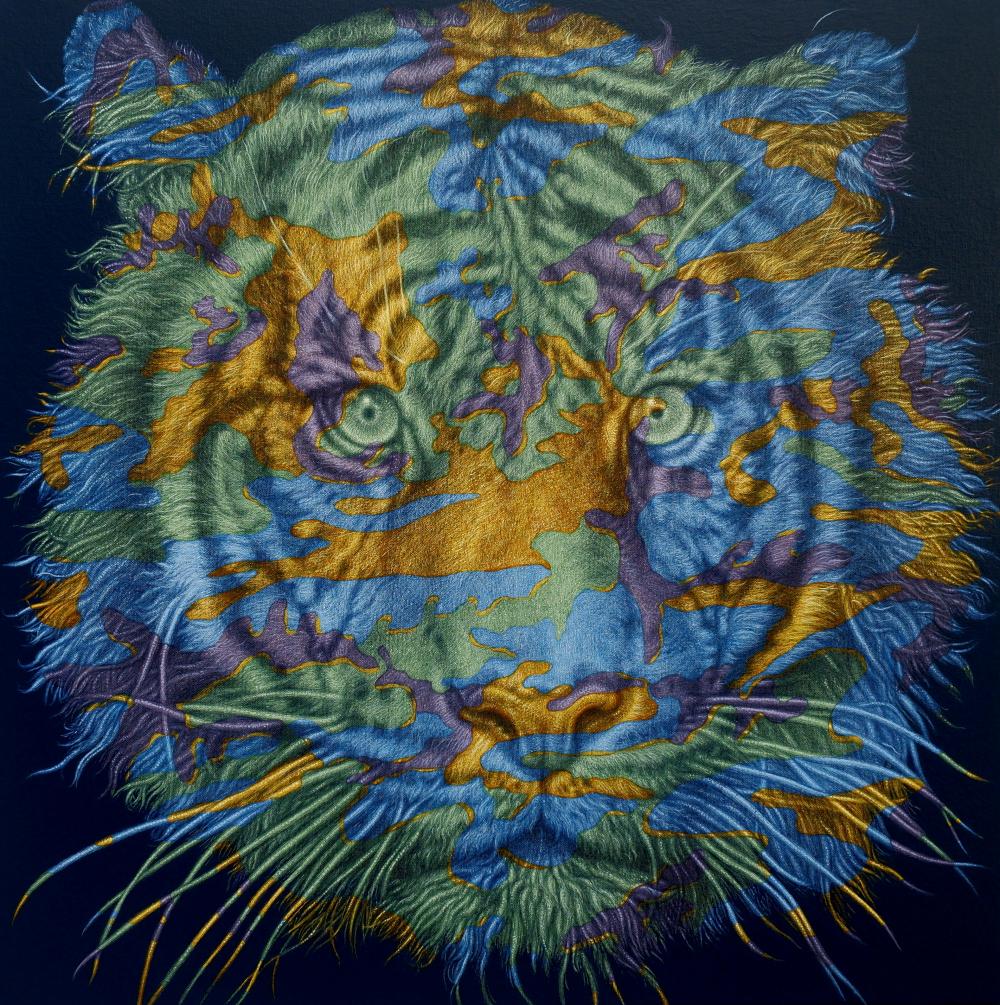 "Warhol created the Camouflage series during the Cold War between the US and the Soviet Union. I believe the series reflected his pride in being an American. I adapted Warhol's pop art into my work because it makes Thai traditional elements look modern.

"Camouflage depicts a tiger in a military pattern because this is the year of the tiger. I also think tigers are not only predators. They can be hunted too. Hence, they patiently lie low in order to stay safe and free," said Jirapat. 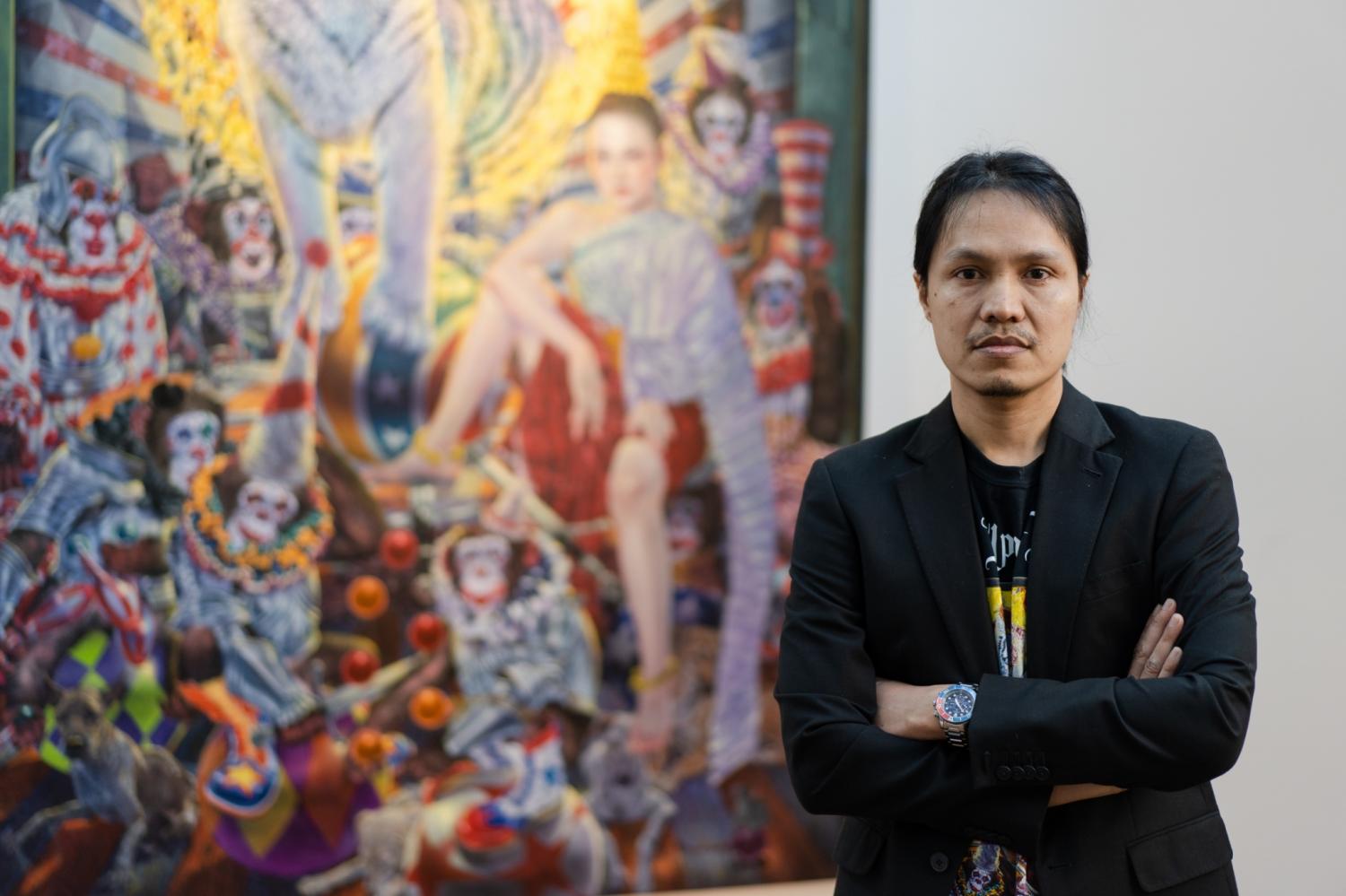 As an artist who critically attacks society, Boonhlue felt "Life Is Beautiful" was very challenging since he had to create a collection with positive vibes. His collection consists of two oil paintings on linen, Rooftop Pool No.2 and Rooftop Pool No.3. His inspiration came from his own painting, Rooftop Pool, in the 2021 solo exhibition "Once Upon A Time".

Rooftop Pool depicts a girl sitting next to a pool full of geese with a city view in the background.

"I created many paintings that satirise society. Rooftop Pool is the most positive painting I have ever produced. I painted it on a day I felt laid back and wanted to create something beautiful. Then I developed Rooftop Pool No.2 and Rooftop Pool No.3 from this painting," Boonhlue explained. 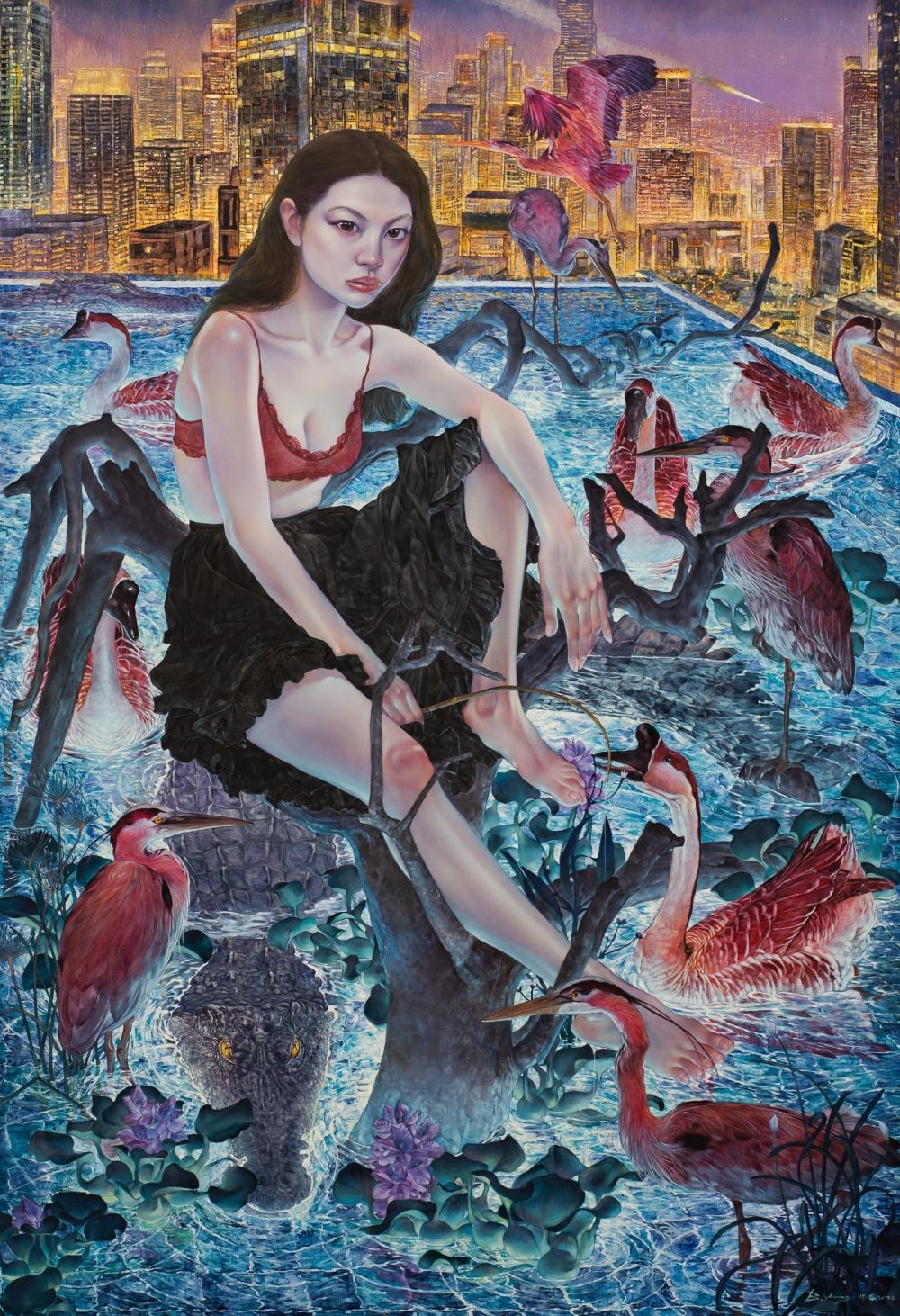 The artist interprets his childhood as a beautiful life. He grew up in the Thon Buri area where he enjoyed the natural environment with beautiful canals and many orchards with coconuts, lemons and oranges. The area has now turned into a cityscape with many condominiums. Rooftop Pool No.2 and No.3 portray girls in the rooftop pools of condominiums. In the pool, there are geese, ducks, crocodiles, tigers and water hyacinths.

"I know someone who bought a condominium room and she feels stressed about the expenditure. Purchasing a condominium in the capital is a hope for many people in the new generation. They post photos of rooftop pools on their social media and feel depressed about the expenses required to purchase a unit. Crocodiles and tigers refer to the diversity of people we meet in society. Some of them hide their bad intentions. I used to play in and around a canal, but these people play in the pool because today most canals have become sewers. If I had the power, I would save canals. They are useful; they can be for transport or a public space," said Boonhlue. 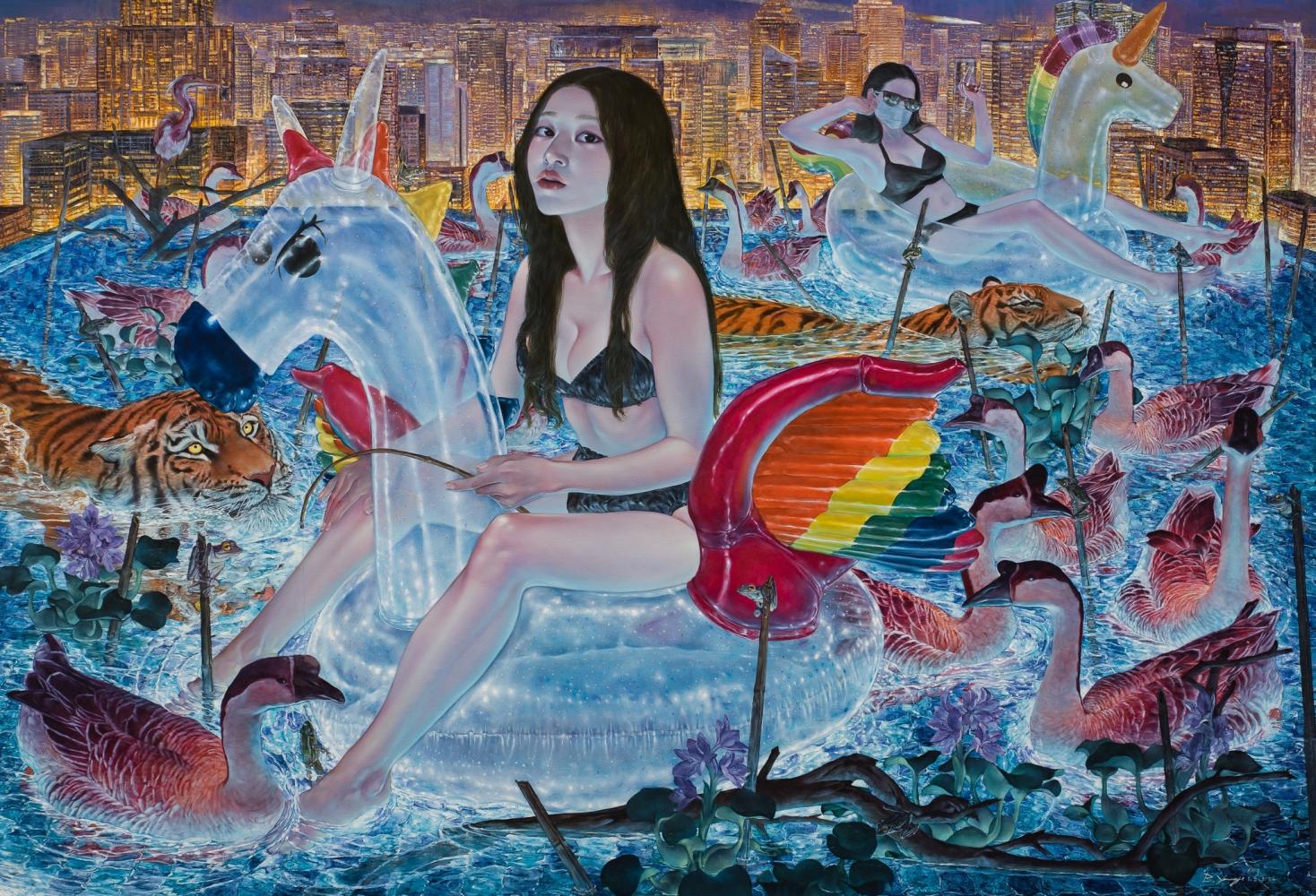 One objective of the exhibition is to console visitors with art. Boonhlue said looking at art makes him happy.

"There are many excellent pieces that have impressed me. I wondered how they could make that kind of art. If I can, I usually spend time viewing art on Instagram. It is entertaining and I feel time flies fast when I am doing so. My collectors also told me that they like to take time to see my paintings and feel happy about it," said Boonhlue. 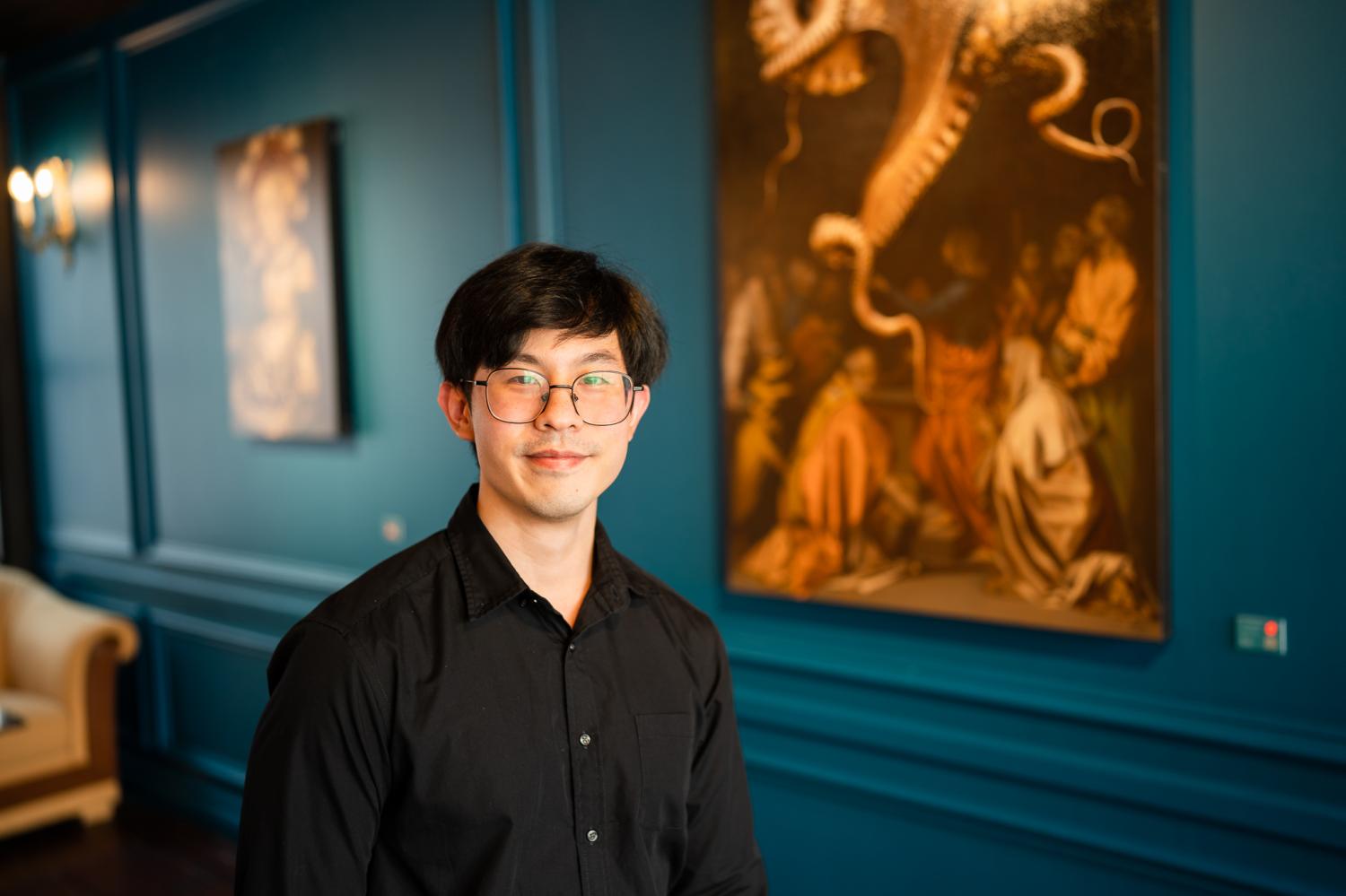 Pat, a full-time artist and a guest lecturer at Silpakorn University, has been interested in old master paintings and art history. Pat believes that people define the beauty of life differently.

"For some people, it is about their childhood experiences or the beauty of nature. For me, it is about viewing art, especially art by skilled artists. These artists use their experiences to create works that make viewers see the world in the most beautiful aspect possible. Their artworks are what help me to realise that this world is beautiful," Pat said.

"Sargent was supreme in drawing portraits; he could capture the personalities of models and portrayed them quickly and accurately. I am impressed with Sargent because I am not good at portrait drawing. The Critique Of Mr. Sargent was inspired by the idea that I wanted him to criticise my portrait," Pat explained.

"Rockwell was an illustrator who created works with optimism and good humour. His works were criticised for being too positive and not representing American society in the 20th-century, but the positive vibes of his work fit the theme of this exhibition," Pat added.

Another painting, Mr. Tadema's Holiday, was inspired by Tadema and Latour. In the painting, Tadema is portrayed relaxing in a chair and arranging flowers which were duplicated from Latour's paintings. Tadema was renowned for representing scenes from Roman life. He was also famous for his flower painting The Roses Of Heliogabalus.

"Tadema also painted flowers. I wanted to create this painting because I thought he probably spent time arranging flowers himself. I admire Tadema because he is marvellous at painting all kinds of subjects from people, animals and objects to landscapes. Also, the French painter Latour is the best at painting flowers. Nobody draws flowers better than Latour. When viewing Latour's paintings, I do not feel like I see flowers, they are more like portraits where each flower has a unique look," Pat said.

Asked what was the biggest challenge in creating these paintings, Pat said he tried techniques that he had never used before.

"Rockwell's illustrations look simple, but it is not easy to create since it requires accuracy. The late 19th century techniques, like Tadema's painting, are difficult because they have elaborate details in every range. Everything must have sharp details; nothing is blurred. It was quite difficult to work on. The paintings probably are not perfect, but I did my best in the limited time frame," said Pat. 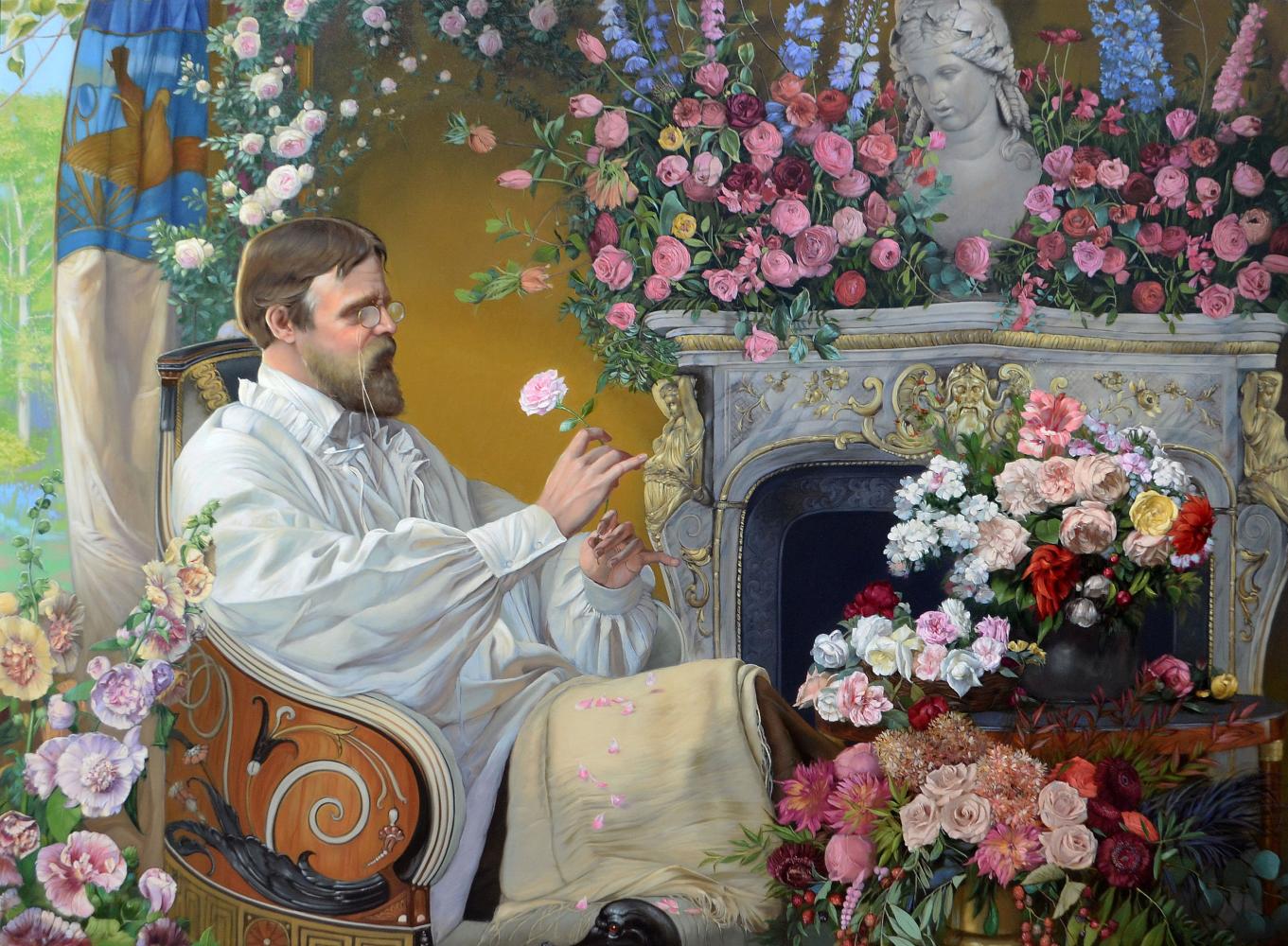