Thailand is a country with cultural diversity. The "Red Area And Black Spirit" art exhibition presents two cultures that reflect the differences between two woodcut artists -- Chayasit Orisoon and Warisara Apisampinwong. While Chayasit showcases Song or Tai Dam culture in his "Black Spirit" room, Warisara exhibits Chinese-Thai culture in her "Red Area". Both Chayasit and Warisara are colleagues who earned a master's in visual arts from Silpakorn University. Since their woodcut pieces involve culture, they decided to hold the exhibition together at the People's Gallery, Bangkok Art & Culture Centre.

"We want to present woodcuts in the form of contemporary art that depicts multiculturalism. The 'Red Area' refers to Chinese-Thai culture and 'Black Spirit' refers to Tai Dam culture. Contemporary art is a core that connects different ethnicities together," Chayasit said.

In addition to having interests in their ethnic background, these two artists are fond of the woodcut technique because it allows them to express their ideas in huge art pieces.

"Woodcut is a very old printmaking technique which was used to duplicate the Tripitaka in the ancient period. This technique allows us to present our ideas without limits. The colours on a woodcut piece are vivid and powerful. Also, we can mix other techniques with woodcut," Chayasit explained.

Life spoke to Chayasit and Warisara about their ideas behind "Red Area And Black Spirit". 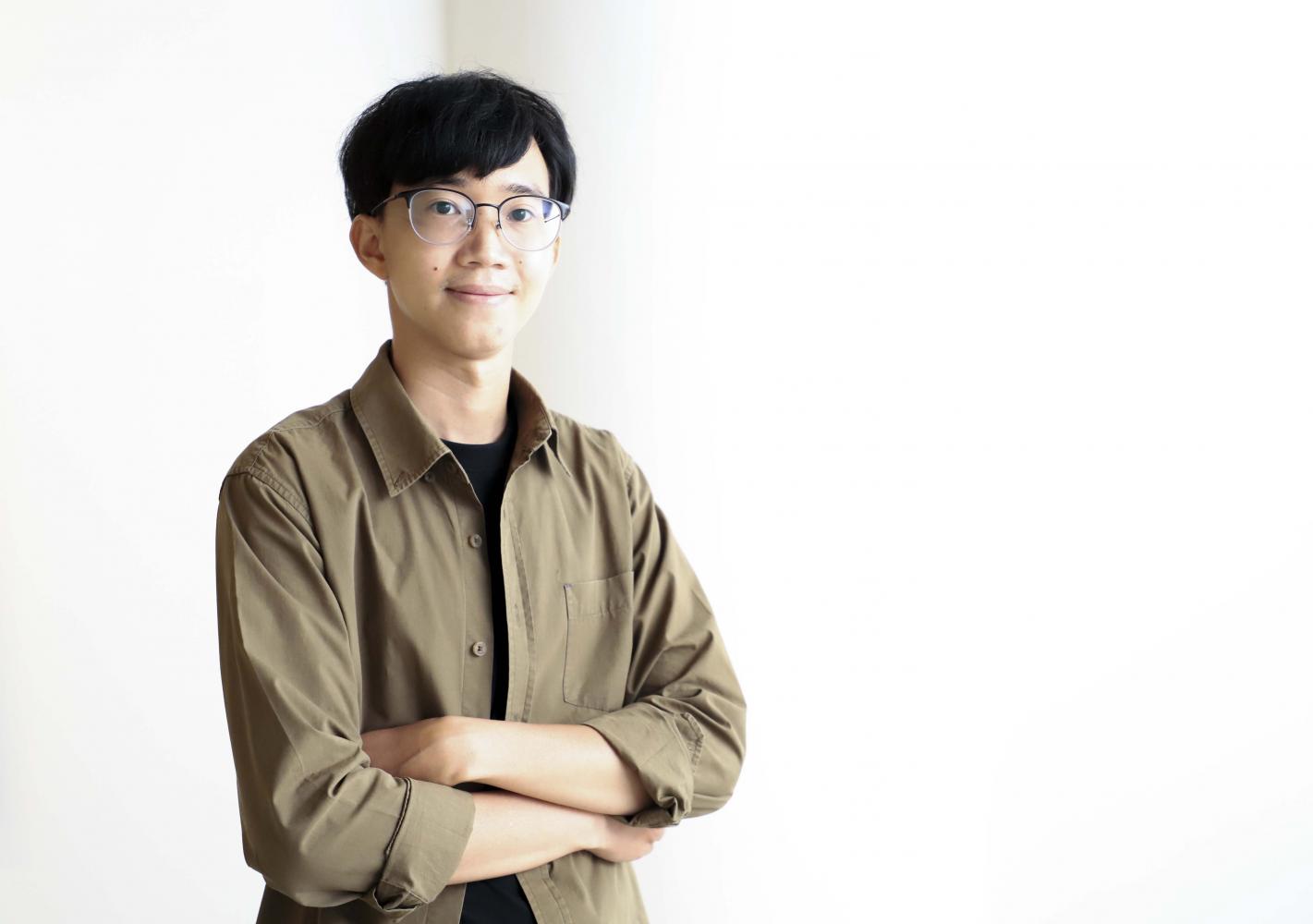 Chayasit is proud of being Tai Dam, an ethnic group that originally lived in Dien Bien Phu in Vietnam. Due to war, Chayasit's ancestors migrated to Phetchaburi during King Rama III's reign.

"In the reign of King Rama IV, the king ordered the construction of a summer palace in Phetchaburi. My ancestor was in charge of supervising the Tai Dam people until the palace, Khao Wang, was completed. My ancestor was appointed to be a government officer. I am very proud of my ethnicity. I do not feel alienated living in Thailand. Tai Dam people have humanity and equality as Thai citizens," said Chayasit.

Chayasit's woodcut pieces present the way of life of the Tai Dam people. In each piece, Tai Dam people appear in traditional attire and home decorations such as floors, walls, curtains and furniture are presented in traditional patterns. With elaborate details, images of Tai Dam people in his woodcuts look alive. Unlike other woodcuts that focus on traditional lives, Tai Dam Buddhist Ordination Ceremony depicts a Tai Dam man ordaining as a Buddhist monk which represents both Thai and Tai Dam cultures.

"Tai Dam people believe in spirit worship, but my family members also believe in Buddhism. Tai Dam Buddhist Ordination Ceremony displays multiculturalism which combines several beliefs together. I believe in good deeds, and doing good deeds are not divided by ethnicity. When I ordained as a monk, I went through the ordination ceremony like other Buddhists, but before that, I was in a room of my ancestral spirits and told them that I would be a monk," he said.

Like many traditional cultures, Tai Dam has changed and/or become lost. Chayasit said his grandfather and father can speak the Tai Dam dialect, however, while he understands it, he cannot speak it.

"At traditional funerals, shrines must be set up, but nowadays we rarely see this at funerals. My grandmother had a traditional hair bun, but my mother is Thai, so she does not keep her hair in a bun. A tradition that we continue until today is to pay homage to ancestors. In the houses of Tai Dam people, there is a room for ancestral spirits where we provide food offerings every 10 days. Ancestors will protect their descendants to live peacefully," Chayasit explained. 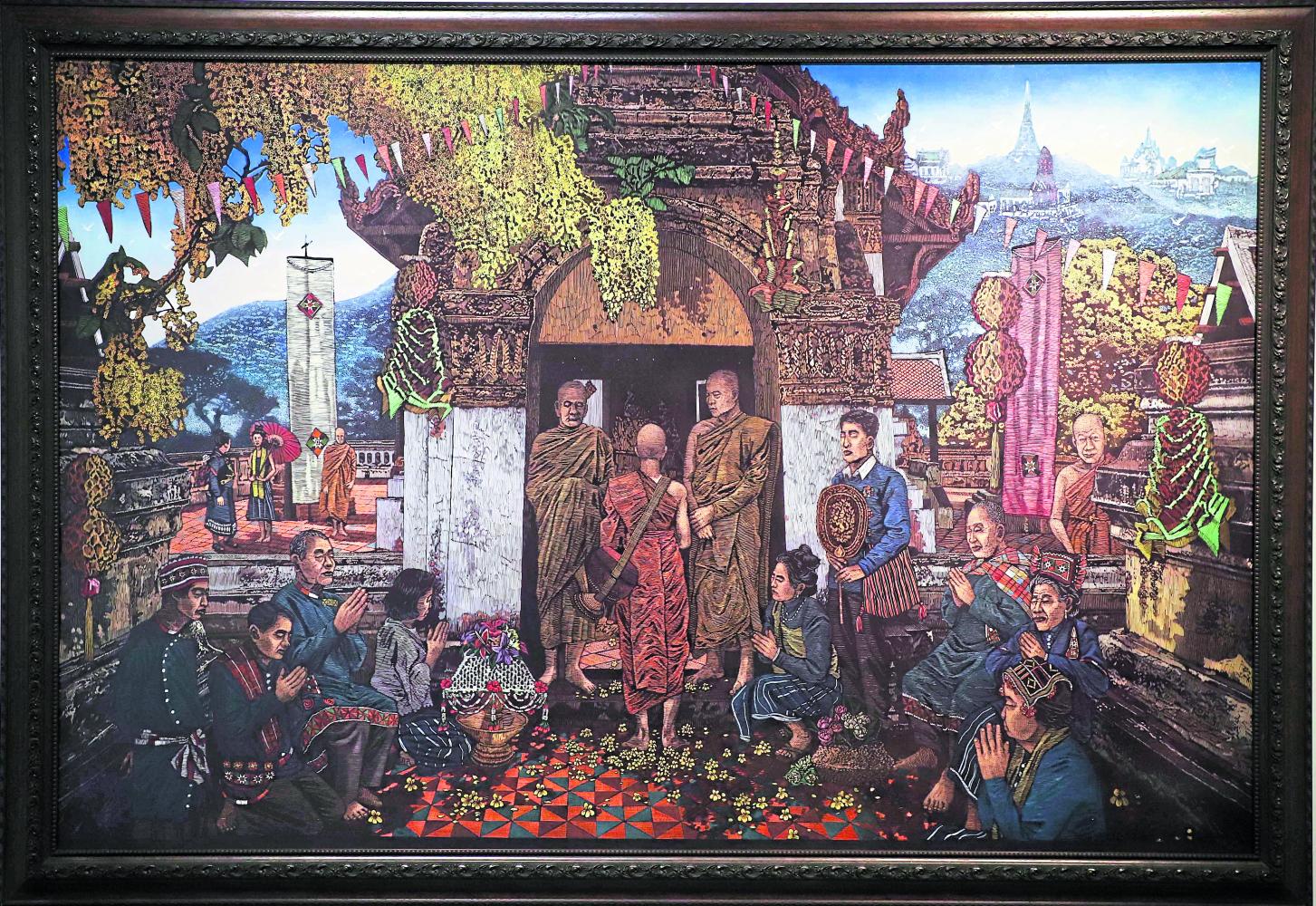 Among many awards that Chayasit has won, he said he was impressed with the PTT Art Contest Award the most because the contest allowed him to visit art museums in many countries such as Italy, Spain, Czechoslovakia and Austria. Chayasit is currently an artist and guest lecturer at Sripatum University. He still sends his woodcuts to art competitions but is not worried about winning.

"If I win a contest, the reward will fund my work on another piece. However, awards are not something that last forever. The younger generation will replace the older generation. It is more important for artists to think about how to make their works special and unique, so people can recognise them," concluded Chayasit. 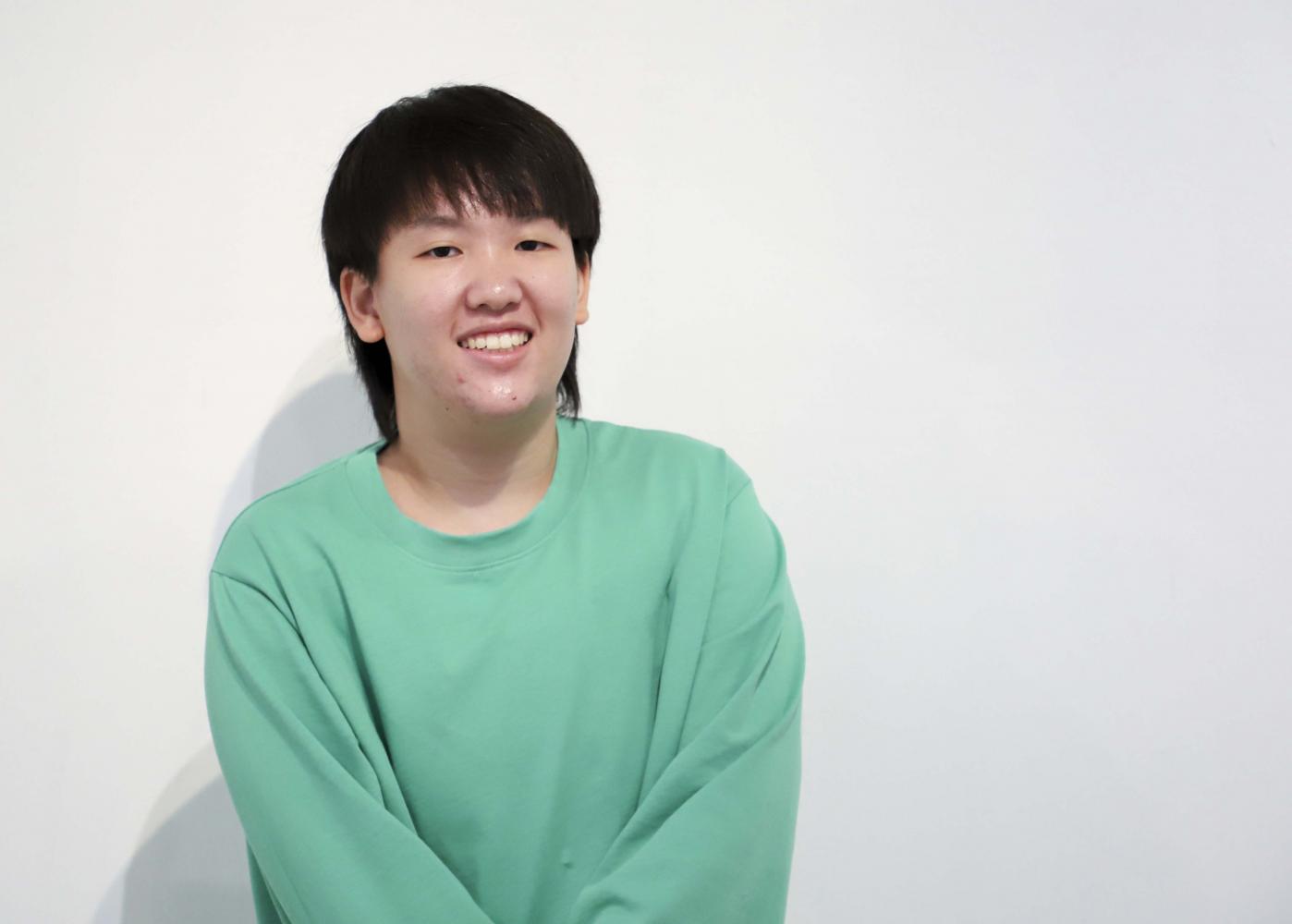 Warisara's grandfather and father emigrated from China, so she grew up with influences of Chinese culture.

"My way of life revolves around Chinese culture. When I was younger, I could not have spicy food because I was used to Chinese food which is bland. Many people questioned me if I am discriminated against in my family because I am a woman. I feel that sometimes the men in the family get special treatment, but it does not bother me. When my grandfather died, his three sons, including my father, inherited all the property, but his four daughters received nothing. They believe that women will share property with their husbands," Warisara explained.

Since Warisara grew up in a family that upholds Chinese culture, she has an interest in Chinese-style architecture. The concept of her woodcut collection "The Power Of The Eastern Color" features Chinese temples or shrines as the main image. Each woodcut is intriguing with remarkable lighting and colours and Chinese related symbols.

The Power Of The Eastern Color No.6 by Warisara Apisampinwong.

"My inspiration does not come from only Chinese culture. The concept of 'The Power Of The Eastern Color' came from my travels to countries such as Taiwan, Vietnam and Singapore where I visited Chinese temples and shrines for research. Thus, my inspiration is from Eastern culture," she said.

"Thai people brought these five colours from Chinese pottery and these colours are believed to be lucky. Since I am Thai mixed with Chinese ancestry, I think I can make my work have a connection between Thai and Chinese," she added.

Through her research, Warisara discovered that patterns and decorations in Chinese temples and shrines in different countries have their own unique styles and patterns.

"Chinese temples in Thailand are decorated with gold and bright colours. In Vietnam, I was in a very old temple which had modernised decorations with engraved marble but its design had a minimal style. It is great to see Chinese temples in different styles," said Warisara. 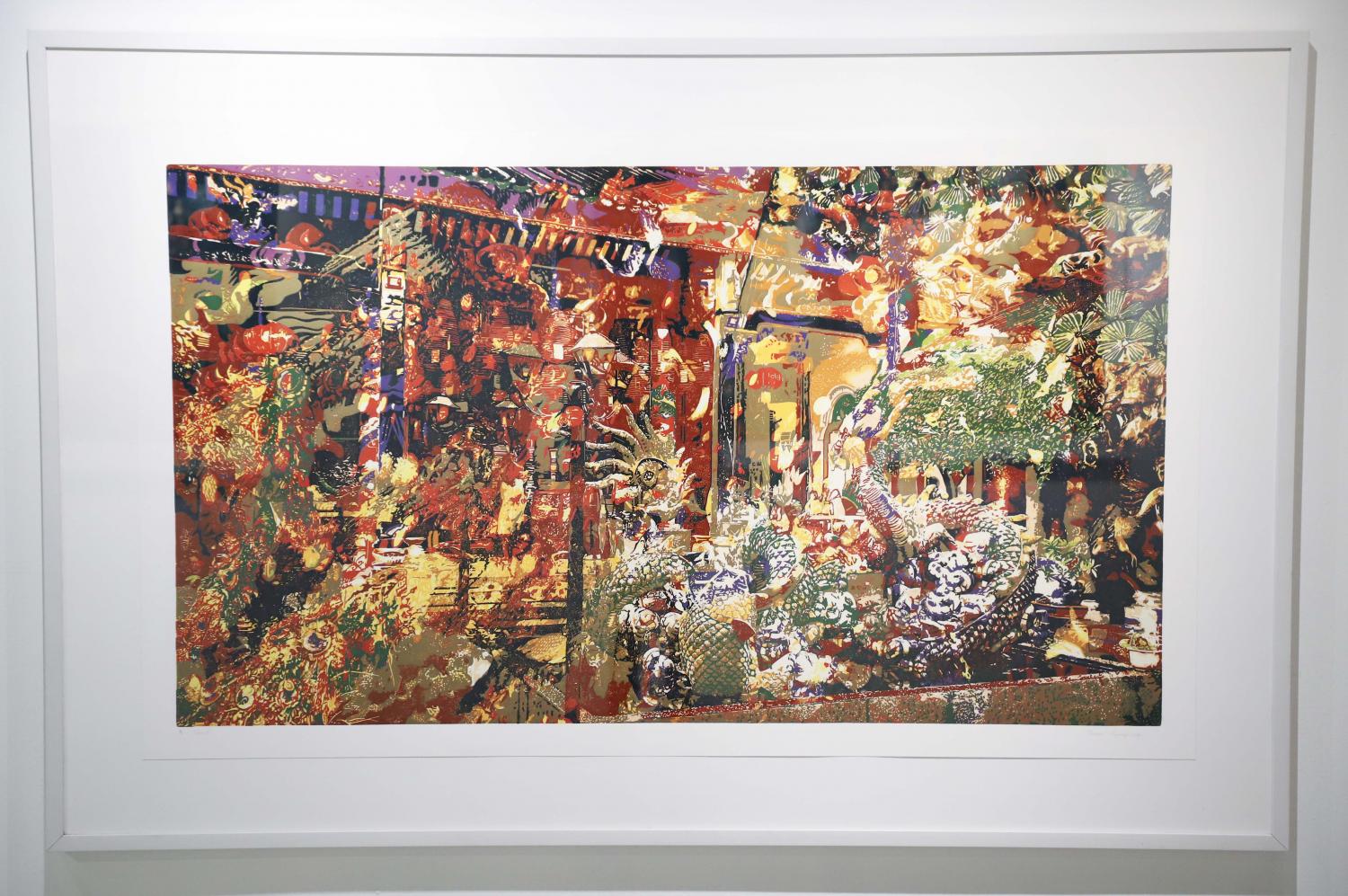 The Power Of The Eastern Color No.3 by Warisara Apisampinwong.

Warisara has won both local and international awards. Her proudest award was a consolation prize from the International Biennial Print Exhibit in Taiwan. The artist said this award was her favourite because she had not expected to win the competition.

Recently, Warisara applied to study a PhD at the Faculty of Painting Sculpture and Graphic Arts, Silpakorn University. Her goal to be an art lecturer was inspired by her adviser, Pongsiri Kiddee.

"Pongsiri is dedicated and determined. He gives students tremendous support even though he does not receive extra payment. Because he encouraged me, I won many art competitions and earned financial rewards to rely on myself. It would be great to have more lecturers like him," Warisara said.