In response to the improving Covid-19 situation in many countries and relaxed preventive measures, the Hong Kong Tourism Board (HKTB) introduced the campaign "Arts In Hong Kong" as part of Art Basel to promote the city as an international culture destination.

Last weekend, Art Basel was held at the Hong Kong Convention and Exhibition Centre (HKCEC) to showcase pieces from 130 galleries.

The Hong Kong-based artist Ellen Pau presented the moving image The Shape Of Light, the only exhibition available on the YouTube channel M Plus, until June 19. The Shape Of Light explores the possibilities of the immaterial and the material transforming light into digital objects. Featuring a popular sutra in Mahayana Buddhism, The Heart Sutra is expressed through sign language on the concept "form is emptiness, emptiness is form". Expression of natural phenomena like fire, water and light are rendered in computer-generated animations. 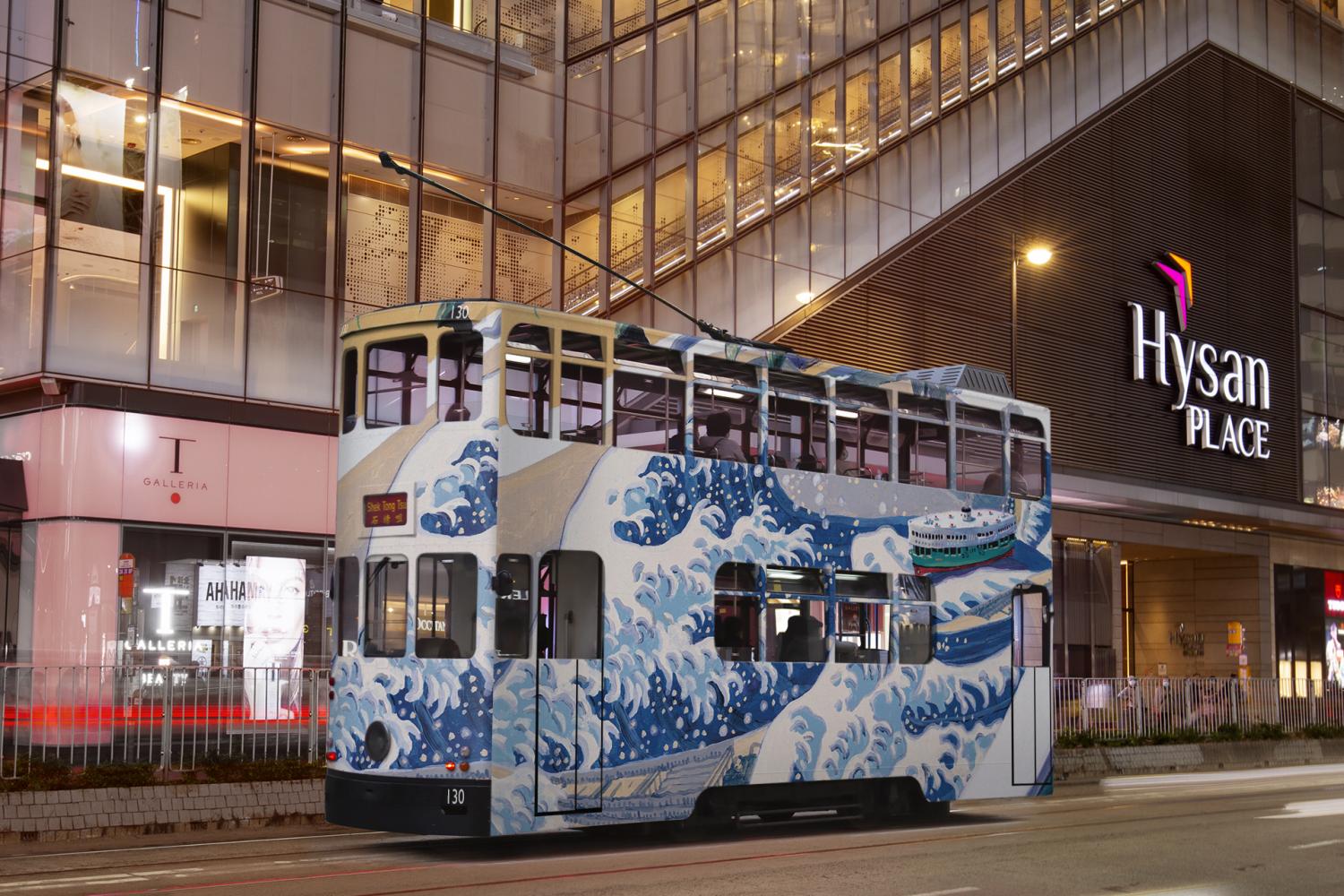 The Star Ferry In The Wave by Stephen Wong Chun-hei on a tram. (Photo © JCDecaux Cityscape Ltd)

Twenty contemporary artists created a group exhibition under the concept "Transform / Artique" curated by Eric Leung Shiu-kee. The exhibition presents a dialogue between traditional and contemporary works of art on fineartasia.com/faapavilion.

Adeline Ooi, Asia director of Art Basel, and Stephanie Bailey, curator of the conversation programme at Art Basel in Hong Kong, hosted a tour of Art Basel via Zoom. Adeline said Art Basel Hong Kong is a hybrid edition which had physical exhibitions at the HKCEC and virtual walkthrough programmes.

Ooi and Bailey's first stop during the online press tour was to view hair embroidery by Angela Su. Ooi said Su, who is currently at the Venice Biennale, is an example of an artist who can embroider hair effectively.

Lam Tung Pang's Potted City series was inspired by bonsai. Stephanie explained that each painting expressed Lam Tung Pang's personal memories and connections to Hong Kong. Although they are bonsai, they have different personalities and characters like human beings.

According to Ooi, The Secret Terminus created by Stephen Wong Chun-hei was one of the crowd's favourites. The painting portrays Hong Kong's landscape with a huge green hill and a blue tram emerging from a tunnel. A model tram which looks exactly the same as the tram in the painting is placed on top of the painting. 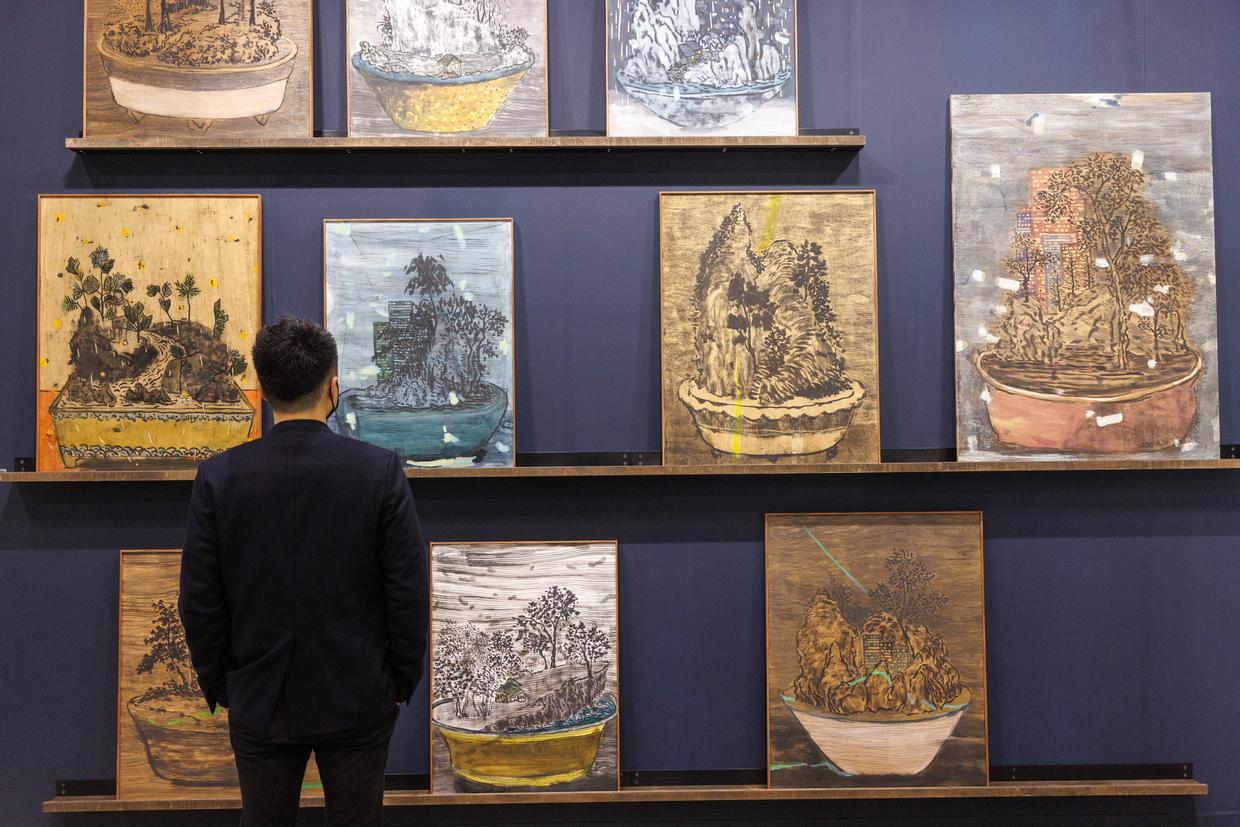 "Paintings by Stephen Wong Chun-hei painted from his memory have become popular in recent years. His paintings are beautiful interpretations of Hong Kong landscapes since people have forgotten how green Hong Kong used to be," said Bailey.

One of the international artists at Art Basel, Ha Chong Hyun, presents Korean minimalism through his Conjunction series. Ha began the series in the 1970s, developing it as his signature style over the ensuing decades. In his new Conjunction paintings, it has evolved and become more diverse in its shades and forms. The artist cultivated a labour-intensive and innovative technique known as bae-ap-bub, where he pushes oil paint through the coarse weave of the burlap canvas, from the back to the front.

The renowned Thai artist Natee Utarit showcases his collection "Deja Vu: When The Sun Rises In The West".

The collection taps the mastery of multiple mediums and cultural strains to observe and reframe the order of time and sharing of knowledge across Western and Eastern civilisations. "Déjà vu" in the title embodies how the artist's mind operates in flashbacks, where images of Western culture are interjected by Eastern consciousness and vice versa. 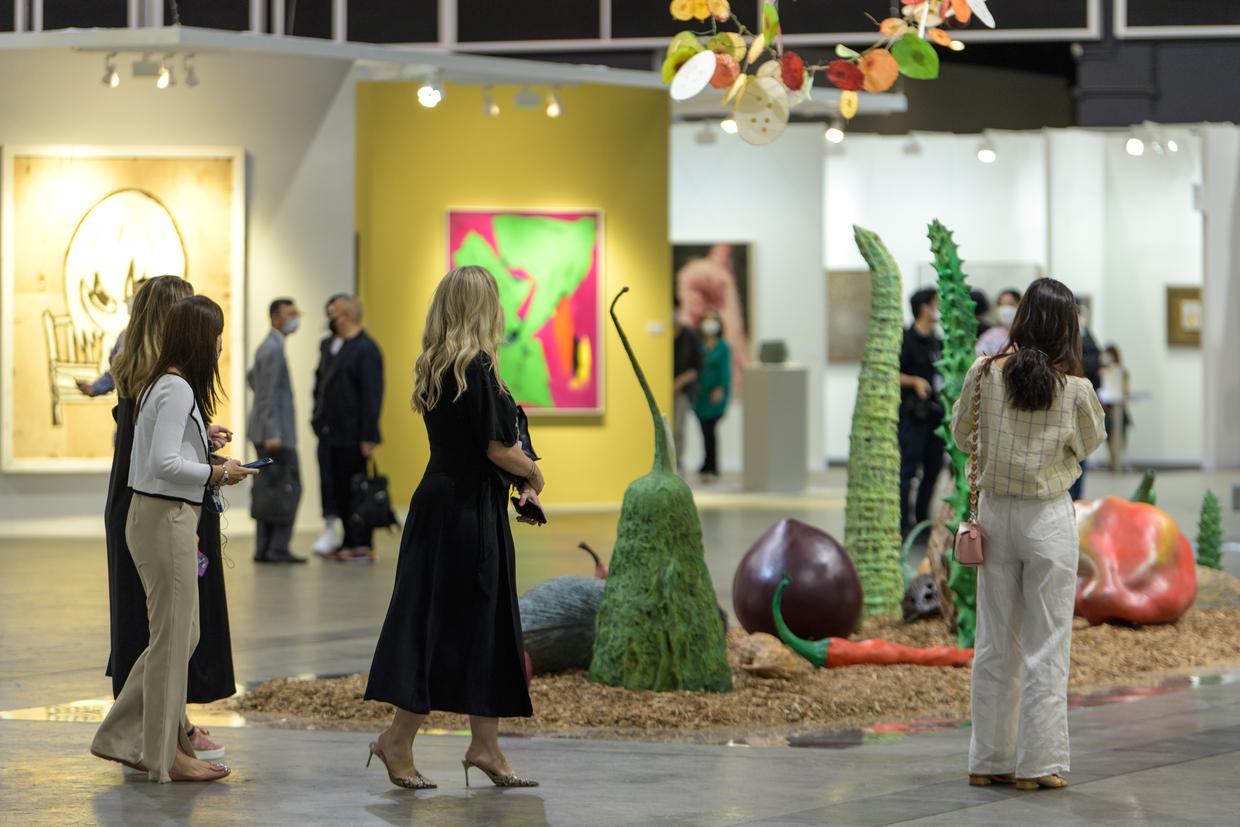 Besides paintings, there are many large-scale installations. Garden Of Life by Ming Fay caught the attention of visitors due to its size and appearance. Daphne King, the owner of the gallery Alison Fine Art, explained that the concept of the Garden Of life means to bring good fortune.

"On top of the foliage is the money tree, representing prosperity and wealth. The fruits are larger than life surreal fruits and all of them symbolise things differently. Pear and peach symbolise longevity and bring good fortune and happiness," King said.

In addition to paintings and installations, many films were screened at Louis Koo Cinema, Hong Kong Arts Centre. Film highlights included Bird With No Legs, The Spiral and Sonata For Smoke. Bird With No Legs featured eight films exploring the artists' interpretations of physical and mental mobility from the late 70s to today. The Spiral presented Hajra Waheed's meditation on the spiral form. Sonata For Smoke by Samson Young was created in response to the artist's residency in Kenninji Temple, Kyoto. 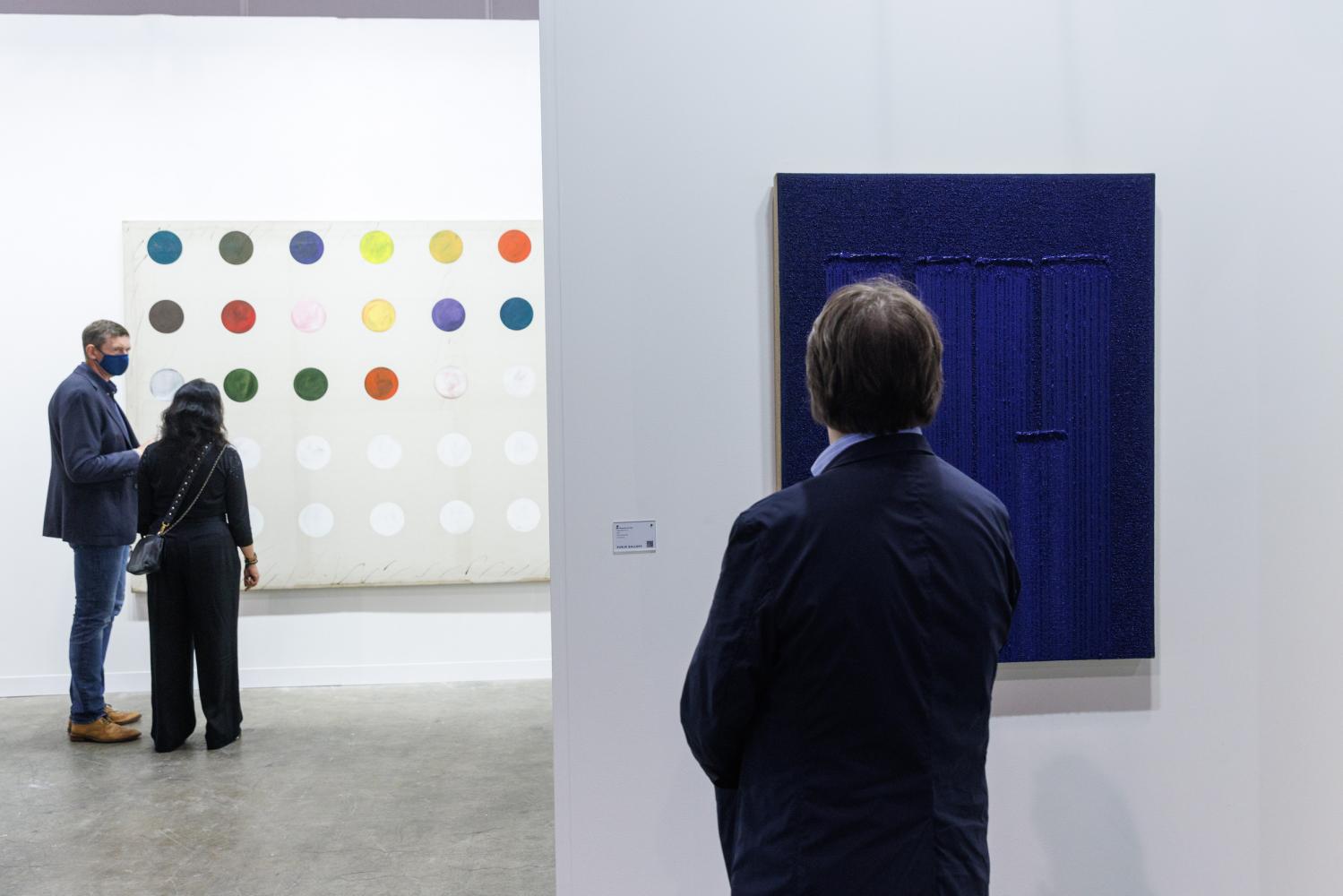 Hong Kong Tourism Board's goal to promote the city as an international arts hub seems to have a bright future since Francis Belin, president of Asia Pacific at Christie's, said they planned to open a headquarters in Hong Kong in 2024.

"The hub we have in Hong Kong today accounts for about a third of global buying we have at Christie's. We think it has so many advantages from the free flow of capital, people and merchandise to very favourable tax regulation. We have decided to bring our business model to the next step and open a new headquarters in 2024 in the heart of Hong Kong with 4,645m² of galleries and offices." 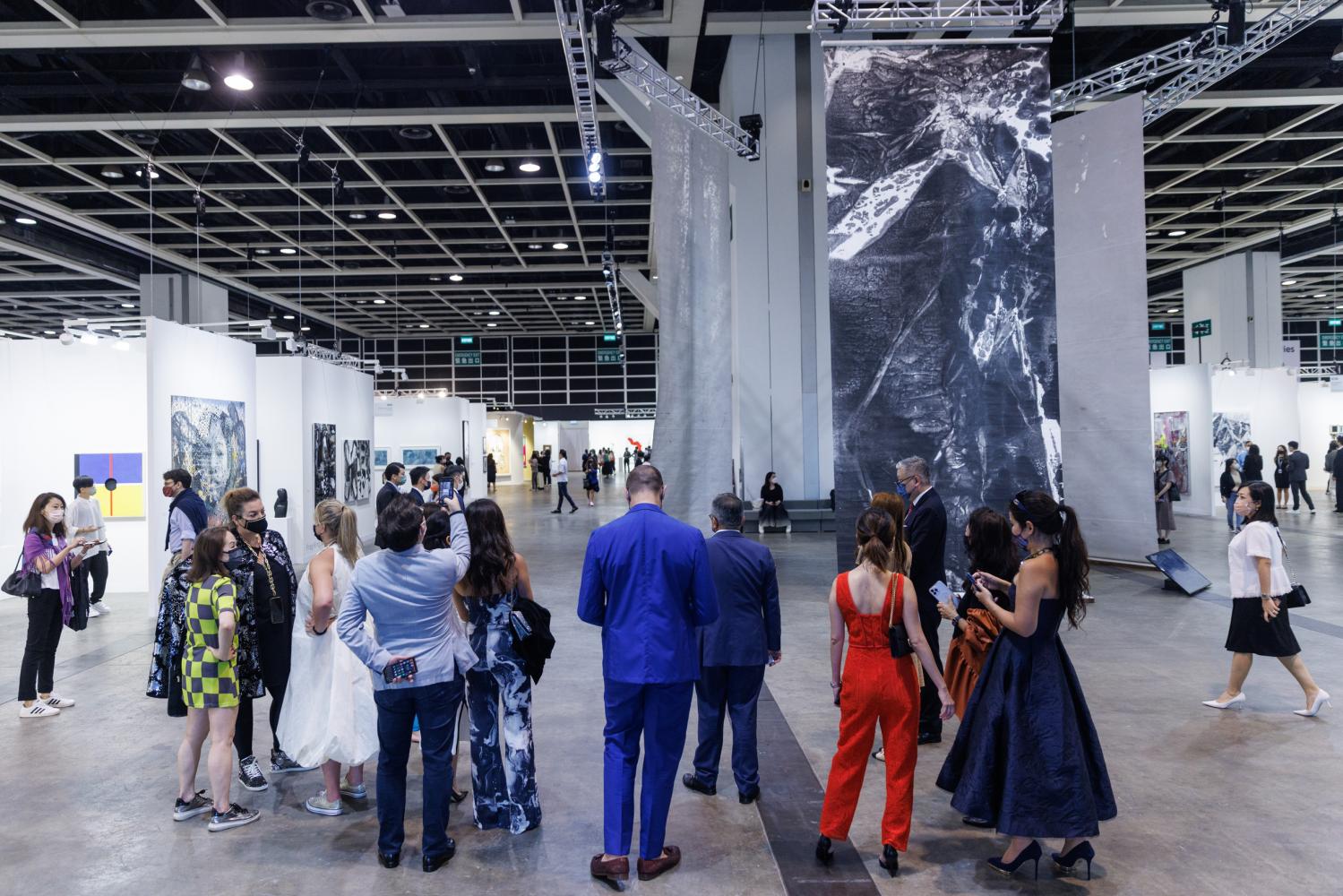 Hong Kong Tourism Board aims to promote the city as an international art hub.