Whether defending the poor or promoting cannabis, Mue Bon stands up to the establishment

A daubed wall marks off a rundown area where makeshift houses were put up for rent, a stone's throw from a luxury condominium in the heart of Bangkok's Sathon. A 40-year-old man exits his car with pink luggage. He puts on a black hat and ties a small cloth around his head. He's wearing a long-sleeve checked shirt, shorts, and black sneakers and his socks are printed with cannabis patterns. Mue Bon, literally translated as "restless hands", opens his arsenal and begins to spray paint a rough sketch of the flightless black bird on the wall.

"I draw the creature to represent the lower class. People always associate wings with freedom, but chickens, ducks, and penguins can't fly. It is like me and my [rich] childhood friend. I couldn't fly like him. Equality doesn't exist. Not every winged creature can fly unless they have equipment. I often use this character to tell stories. People have been following it. You know, my pill is coated with sugar, but I don't know the inside," he told Life.

The iconic bird on the can of spray paint ejecting a stream of gas rearwards is a new addition to his decades-long portfolio of street art from Japan to Australia. Bon painted a giant black panther on the rooftop in Melbourne after many graffiti pieces were removed at home. While creating the new installation, some passers-by and food vendors stopped by. In the end, he handed out token stickers to them, building rapport through graffiti, which can be anything from a modern art form to vandalism, depending on your point of view.

Bon's upcoming two-month exhibition on cannabis in Bangkok's Siam Square Soi 2 from Thursday, the first day when the plant was removed from the narcotics list, is further proof of his street art activism. He is turning a building into a cannabis museum, which represents the flag of the underground movement.

"My friend suffered from cancer and had no choice but to use cannabis because a doctor withdrew treatment. I couldn't do anything because it was illegal," he said. Since then, he has pushed for liberalising the plant.

"I found that cannabis has been used throughout history. For example, it is portrayed in mural paintings in Wat Phra Kaew. I will educate society through this exhibition, which was put on hold five years ago," he said. "Next, I will push for recreational use. People in this country are poor. Can't you give us something joyful? The government should educate users rather than criminalise them."

Resisting the system, an encompassing term for all kinds of institutions that dictate our way of life is personal to the street artist, who grew up in a slum on the banks of the Chao Phraya River.

"In those days, the tide ebbed and went under my house and kids drowned. People were caught in the firing line. My acquaintances were killed or ran away. I got used to it, but kept my distance because I enjoy reading and drawing cartoons, including Doraemon, Dragon Ball, and Fist Of The North Star," he said. 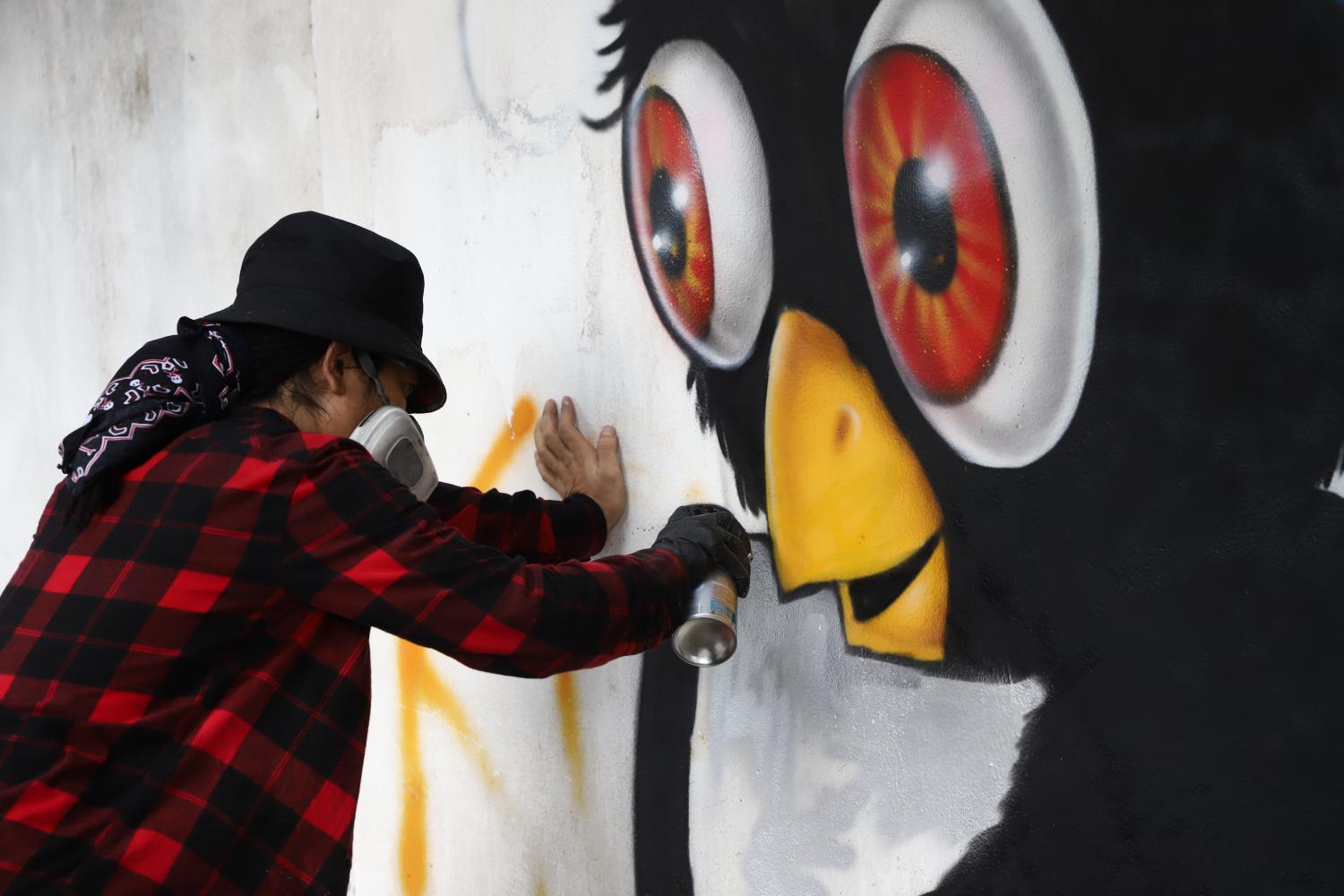 However, Bon finally learned the harsh truth. Close to the slum was an equal-size estate where a luxury house was located. The rich family's child once took him to his library, but when he got home, his mother hit him because his one-day friend's parents feared he would steal their belongings.

"I didn't give it serious thought, but it became an emotional wound. It is inequality. We breathe the same air, but I didn't have an opportunity to have access to knowledge," he said.

The turning point came when his family moved out of the slum. He started to fight back against those who bullied him in Prathom 4 (Grade 4).

"You can't sit on the fence. You can be either a victim or a bully. When I switched sides, I felt very powerful. This is the ugliness of Thai society guided by reverence for authoritarianism. I didn't want to hurt anyone, but it was a self-defence mechanism," he said, describing this period of life as chaotic because he got into a lot of brawls.

Meanwhile, his mother gave him his own room where he started spray-painting the wall. Despite his passion for art, he did not see how he could earn a living from it. Adults told him to be an engineer or an architect and he just bought into it.

"Art no longer mattered and became nonsense. I stopped drawing during Mathayom 1-3 (Grade 7-9), but used my skill to be a gangster such as tagging the school's name and making block screen. It was no longer art in and for itself," he said.

Despite the three-year hiatus, he went to vocational college where he studied applied art. In the new environment, most students were passionate about music and other art forms. He developed his talent by chance because he helped friends with homework. However, he realised that commercial art is not his way.

"I used to put Marilyn Manson's Antichrist in my work. My teacher said if it is removed, it would be exceptional. Why? Do I have to serve others until I die? I am born to serve my soul," he said.

His friend asked him to visit a gallery where a solo exhibition of abstract art was being held. He did not understand it but was struck by how a foreign artist won thunderous applause.

"Is there a kind of job where you can do whatever you want?," he said. Encouraged by his friend, he planned to venture into fine art, but it marked a departure from other students. "I was looking for an unrecognised university out of my rebellion. Why do we have to follow the system? It is my sheer craziness," he said. 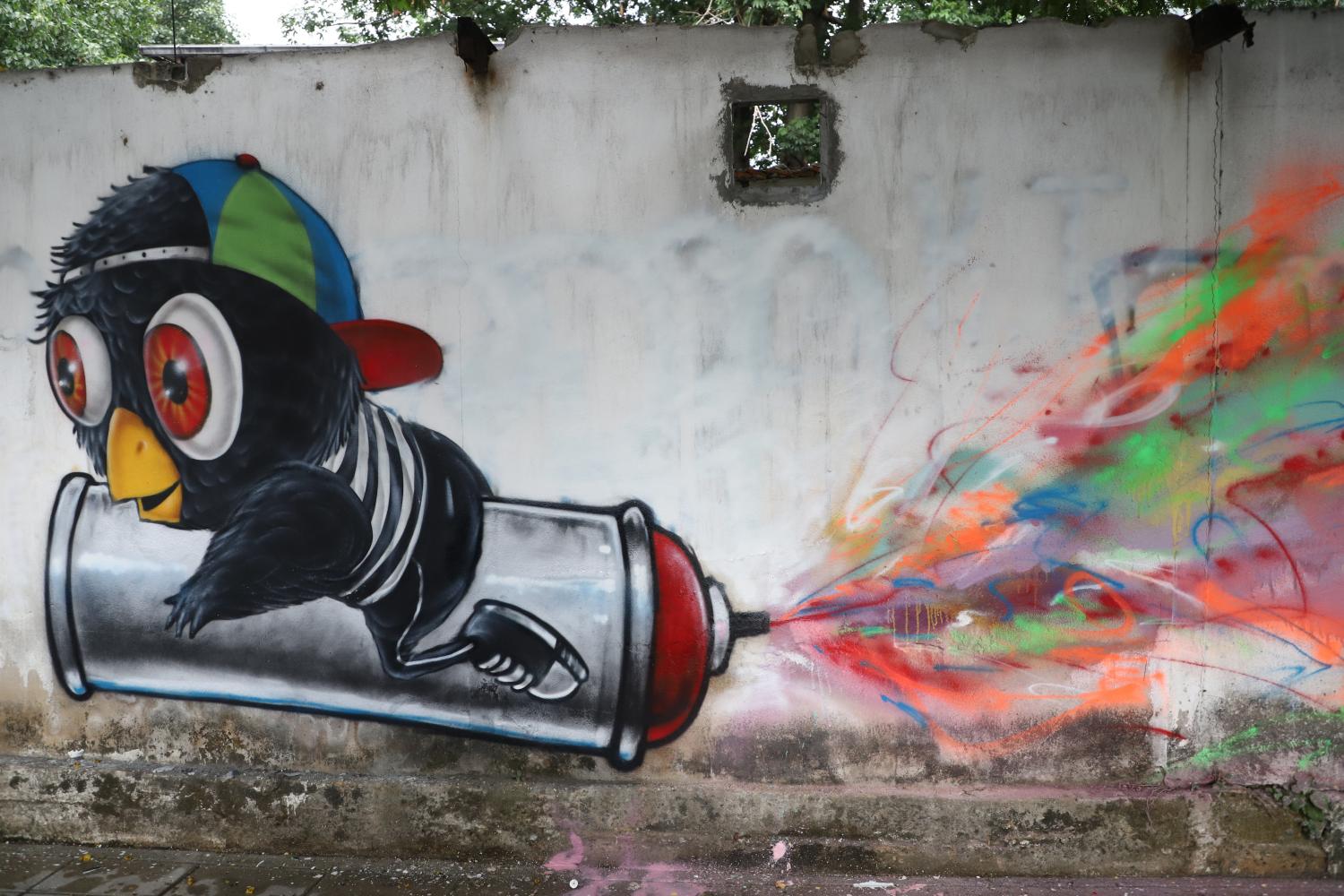 Created by Mue Bon, the flightless black bird sits on the rocket-like spray can. (Photo by Nutthawat Wicheanbut)

Bon won a place at his sought-after university only to be disappointed that its study environment was not stimulating. He worked harder and entered contests to increase exposure. Once, he was commissioned to paint a mural for Sheikh Khalifa. Unlike other students, he harboured the dream of becoming a professional artist.

"There are only three ways: teaching, being upper class, and going abroad. I would be an instructor for my alma mater's department," he said.

However, his future workplace was merged due to university restructuring. His application for a master's degree at a different university was rejected because his street art project gave the impression that he was a hardcore student. On top of these odds, he found that the local art scene was inaccessible.

"Nobody was interested in art because they are poor. Feeling tired from work, they would rather go to shopping malls than galleries. That's the way it is," he said.

Bon challenged the status quo by taking art to the streets at home and abroad. He bought foreign art magazines which included email addresses. In those days, ordinary people were not familiar with the Internet and there were artists who resisted new technology. Of more than a thousand emails he sent, he received fewer than 10 responses, but at least they saw his graffiti. He did many jobs, like selling drawings, to pursue his dream.

"Making art is my life, but eating food is needed for my stomach. I gave half of my income to my family and spent the rest on spray paint. I lost everything, but I was happy. If I wasn't successful, you would see the same determination in my eyes because I have been used to difficulties. I have been making art for a long time. If I didn't make it, I couldn't do anything else," he laughed.

Rarely has anybody seen his real face because he wants people to remember his works.

"I am an empty glass. It is like a puppet theatre artist in camouflage," he said. His street art features a wide range of cartoons, which are deeply critical of our society. A one-eyed TV man in a black suit, for example, emphasises how media can influence human behaviour. Inspired by the peace symbol, Mickey Mouse's skull takes aim at capitalism. He has faced constant harassment, but the demolition of his graffiti beside the poster of Wanchalearm Satsaksit, a political activist who remains missing, is the most serious incident. "It is just art. It doesn't hurt anyone. Why are you [plainclothes officers] so aggressive?" he said.

Bon is breaking the boundary between art and people. Ninety percent of his works appear in public space, but the rest are commissioned. 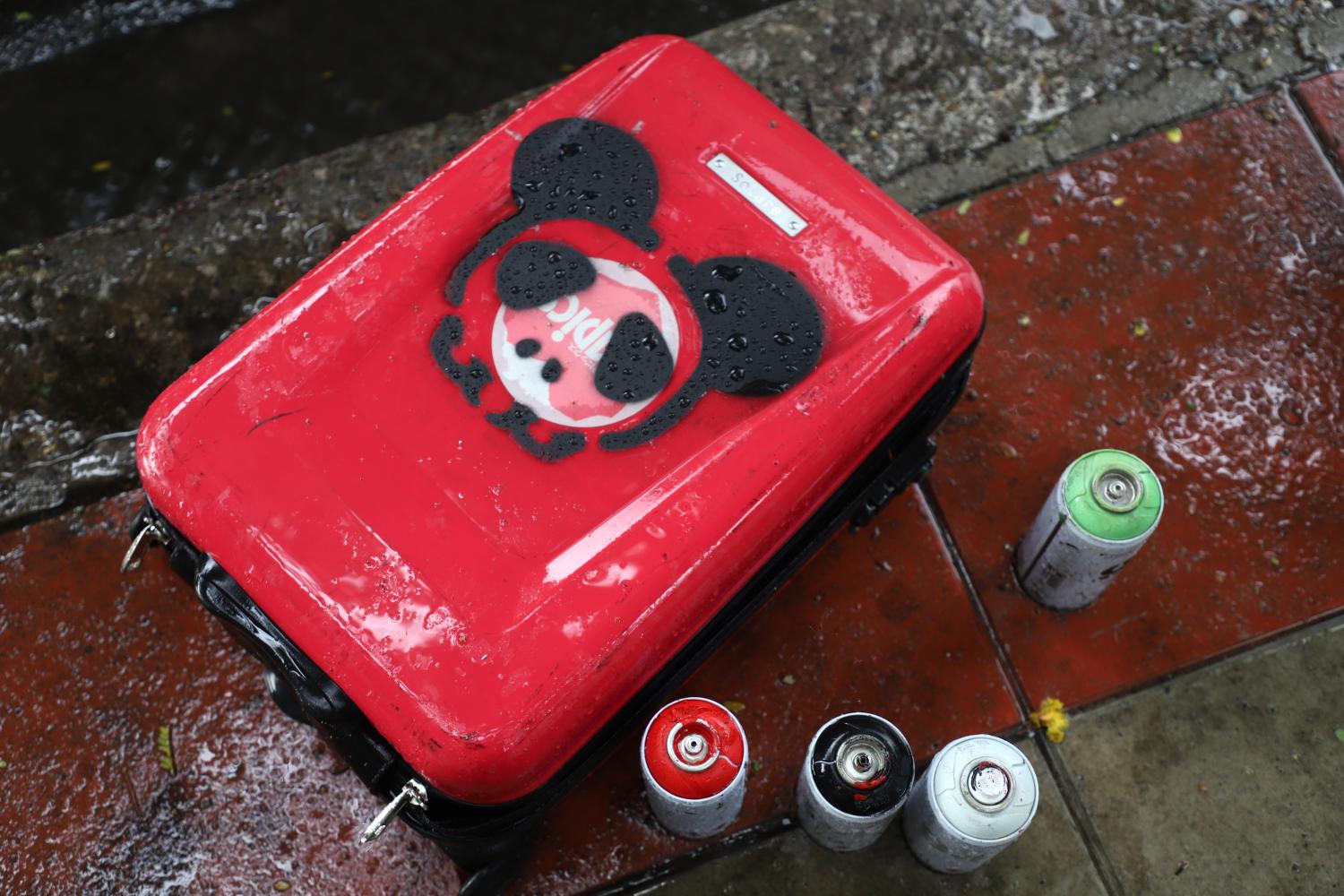 His pink luggage and spray cans. (Photo by Nutthawat Wicheanbut)

"I want to challenge the idea that people must climb the ladder to appreciate works of art in a gallery. You can spit on my work and I will not get angry. I just want to level the playing field. Whether rich or poor, you must see them on the same ground," he said. It was not until recent years that he was paid for his service. Eight years ago, he sold out paintings in a solo show. In 2018, Hermes commissioned him to create an installation in a store window in Melbourne.

After two decades, he noticed a change in public attitude towards graffiti partly because he and fellow street artists have proven that it can revive derelict urban areas, for example, Penang. It can help generate business activities.

"Art can be of great value. It can advocate for social change and heal emotional wounds. Without art, I might lose my mind, so I pour all of my energy into creative pursuit until I become one with it," he said.

He also has witnessed the emergence of young generations. Born in the dark age of information, he remembered "waiting in a queue for the only book on post-1932 art in the library", while youngsters now have access to knowledge at their fingertips. On the day of our interview, he encouraged a young follower to try his hand at graffiti.

"I rarely spend time with people of the same age, except artists, because they often look down on my dream. On the other hand, young people in their 20s are ready to give me enthusiastic support," he said.

Given his standing, Bon reminded himself of the spirit of graffiti, which surged in popularity in the US in the 1960s. "Don't be a conservative who points fingers at others for not following your so-called original style. Don't forget the rebellious root of graffiti. If you refuse to change, you can't live with anything," he said. His recent artwork, a painting on an old metal advertisement board, reflects this contemporary spirit. "The old must adapt to survive. It is like my exhibition on marijuana. I am giving the old plant a new meaning. It is creative destruction," he said.

The solo art exhibition, "Make Siam Smile Again!", is being held from June 9-July 31 at Siam Square 2. Visit his website at mue-bon.com/index.html.