While interpreting the theme of "Shall I Compare Thee To A Summer's Day?" exhibition, eight illustrators and cartoonists expressed their relationships with the hot season through cartoon characters.

Munin is an established cartoonist who earned a bachelor's degree from the Faculty of Architecture at Khon Kaen University. Her cartoons have outstanding visual expressions and messages in the speech bubbles strike a chord in readers. 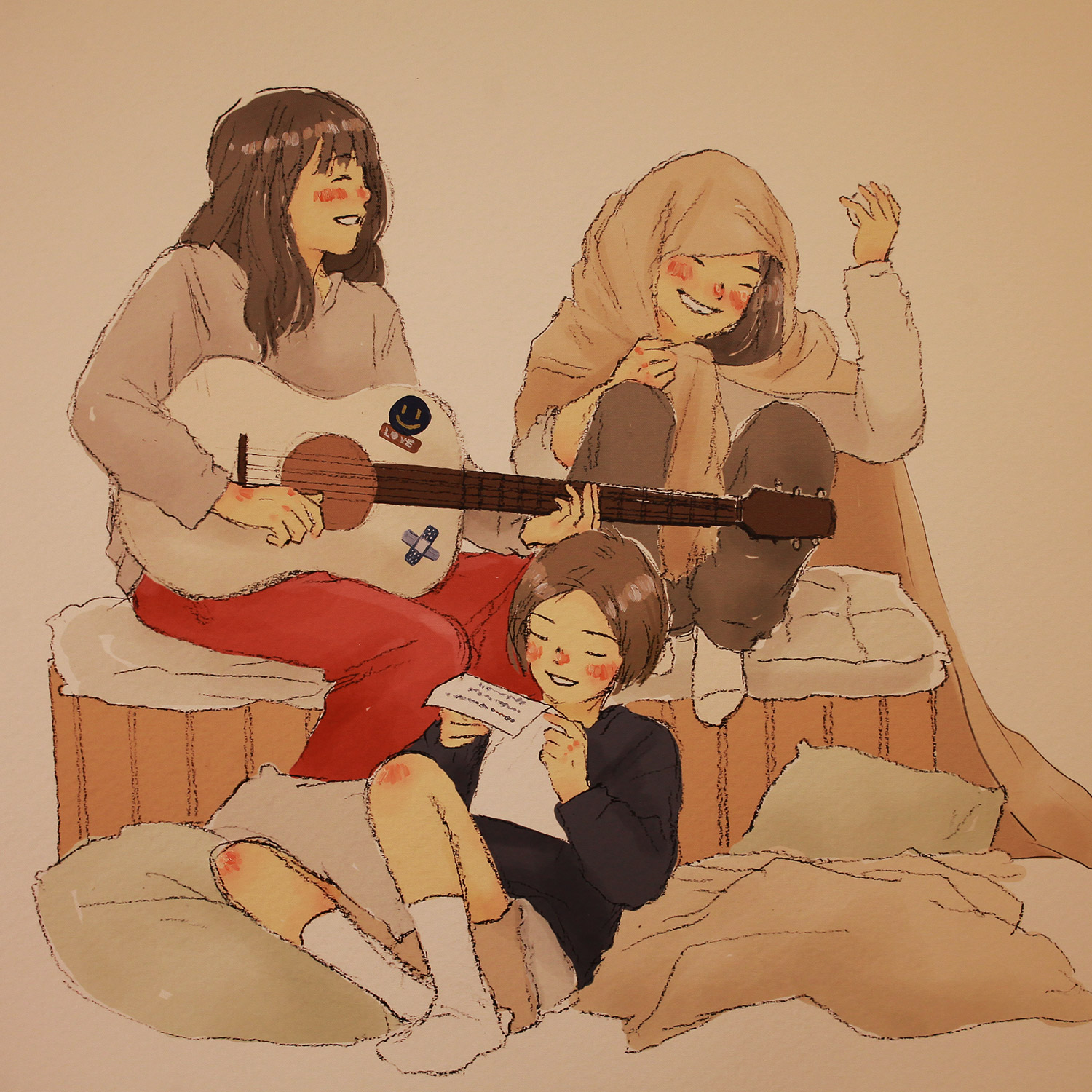 The cartoonist said the exhibition "Shall I Compare Thee To A Summer's Day?" reminded her of summer which is a laid-back time for vacation and relationships. Her illustrations embody different types of relationships through relaxing visuals such as a mother and son, a boyfriend and girlfriend, siblings and friends. The illustrations were developed from pencil sketching many years ago.

"These illustrations are from the period in which I liked my work the most because they were created when my illustrations changed from a childish style to more grown-up. I went back and forth between drawing by hand and computer. I drew each piece by hand with a pencil and then converted the cartoons into digital files. After that, I printed the cartoons on paper and added acrylic colours, so they do not look flat," Munin explained.

To come up with effective words in speech balloons and visual expressions, Munin said she always jots down expressions or visuals when they pop up into her head. 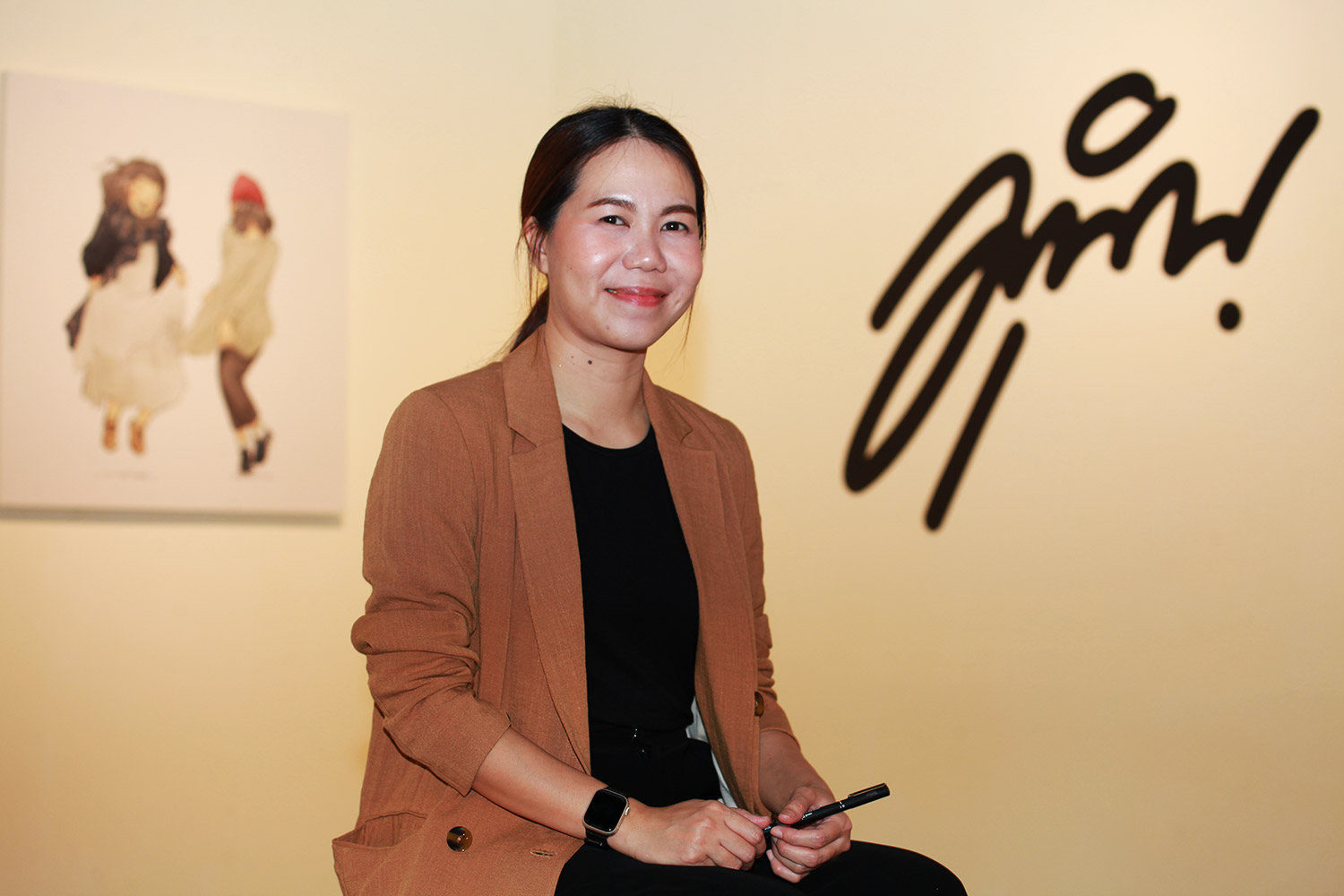 "When an expression comes in my head, I write it down and try to create a story that relates to that expression. I am observant, and notice people's characters. Also, I used to live in a big family, so I am interested in many types of relationships. I like to see family members interact with one another. Without words, their eye or facial expressions can tell how they feel. Thus, I prefer telling stories through visuals. When I was young, I got inspired by friends and other people. After getting married, my inspiration now comes from music, movies and TV series," said Munin.

After working in the cartoon and illustration industry for more than a decade, Munin learned her work had saved someone's life. A male fan sent Munin messages that said he watched a video that showed Munin drawing illustrations to accompany a song, My Letter, by Boyd-Nop.

"In the video, I wrote a letter to my late younger brother along with illustrations. In the letter, I told my brother how family members were doing. The fan told me he had depression and felt like he could not go on. Then, he found this video which made him realise if he were not around, his older sister would be sad.

"Also, he would not know what was going on with other family members. He wrote a very long message and thanked me. We still keep in touch. His feedback makes me feel good to know that cartoons can have more of an impact than a creator expects," said Munin.

Illustrations by Chanida are vibrant feminine characters displayed through vivid colours. Chanida illustrates on different platforms such as a painting of trees on the wall at BaanWaan Kindergarten, OCIIO drinking water packages and music videos for Scrubb's Remind and Tang Bad Voice's Emergency. 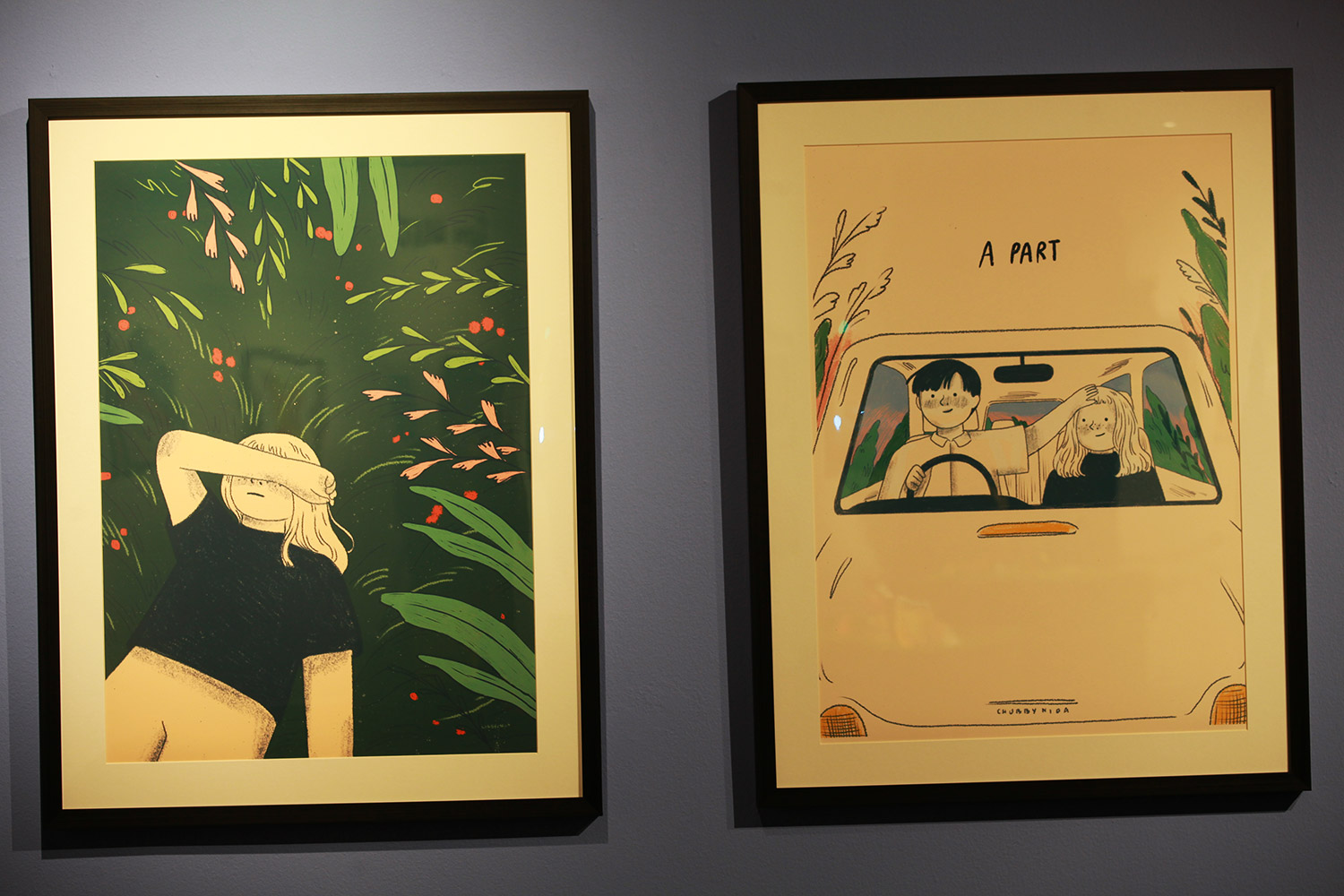 Chanida's exhibition at "Shall I Compare Thee To A Summer's Day?" is set up to look like a cute café with a big shady tree. Four illustrations on a café wall are under the same theme, A Part, and in a corner, viewers can sit on benches and watch a short animation which narrates a story of an ex-couple.

"Most of my works are about self-love. I rarely create an animation about relationships between couples. I decided to tell a story of a couple who had separated and by chance bumped into each other again at a café in summer. I created the animation A Part because it features moving images and viewers can relate to it. I have worked on animations for singers before, but this animation narrates a story from my viewpoint. I was not sure if viewers would understand it. I also wrote a piano piece called Memories for this animation. It was my attempt to provide music to images," Chanida explained. 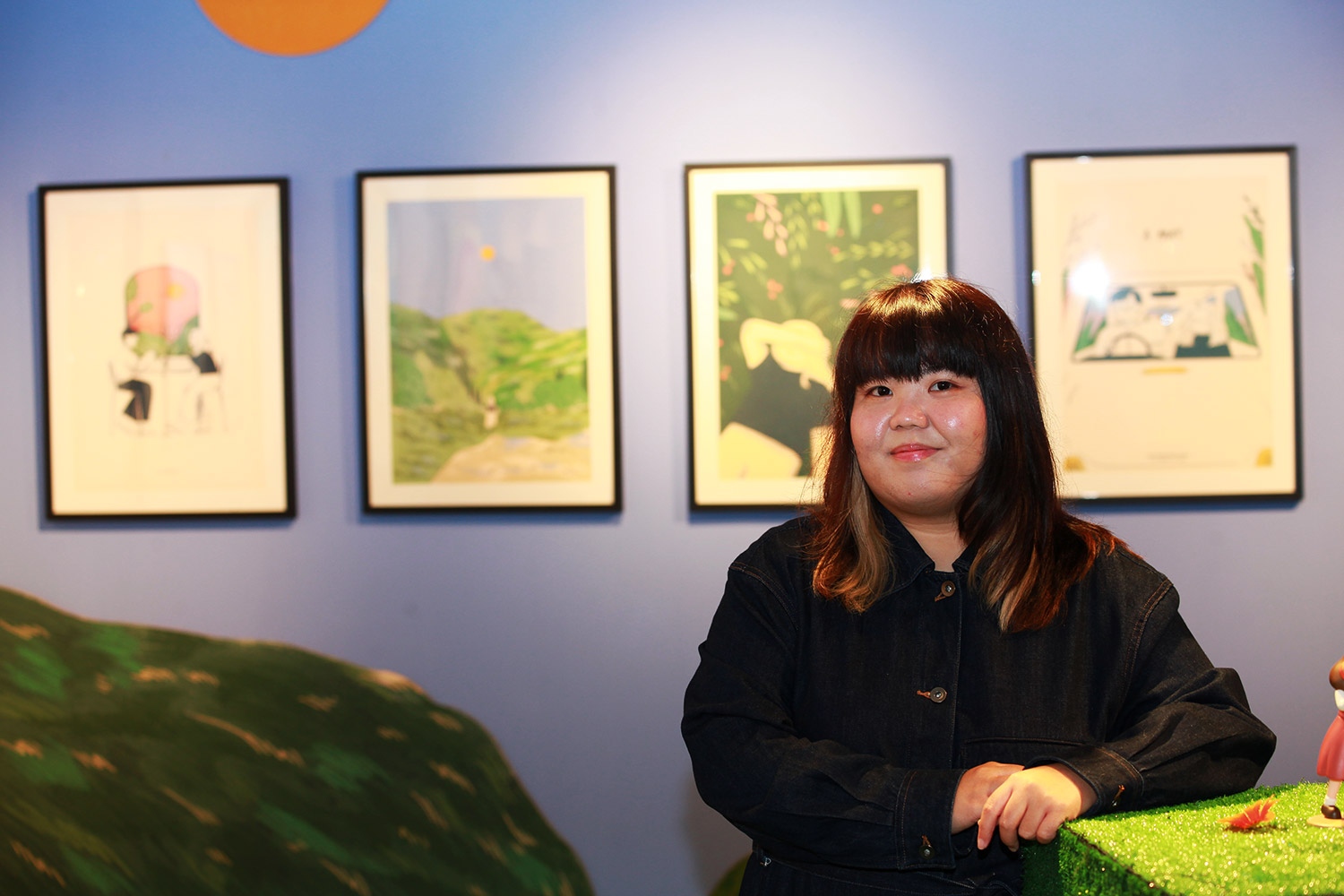 Chanida's works are accepted by followers and clients. However, in the past, Chanida was not satisfed with her style. She stopped posting on Instagram for a year to discover herself. When studying for a master's degree in illustration design at Kingston University of London, she explored several techniques and felt more confident after graduation.

"I felt my work had not improved, but I was afraid of changing my drawing style because I was not sure if followers would like it. After being in London, I felt free and became bolder. I learned that I did not have to work on the same thing repeatedly. Aside from illustrations, I could work on other kinds of art, but I have to figure out how to communicate and make people understand my work," said Chanida.

Pazut, founder of Tuagomstudio, created a popular character Tuagom, who hangs out with Buddy (a dog), To-To (a bird) and Mochi (a hamster). Pazut said he wanted to present other kinds of relationships besides couples. Pazut created the concept, "A Little Happiness Discovered In Summer", and the setting is a beach where Tuagom and his animal friends have fun. 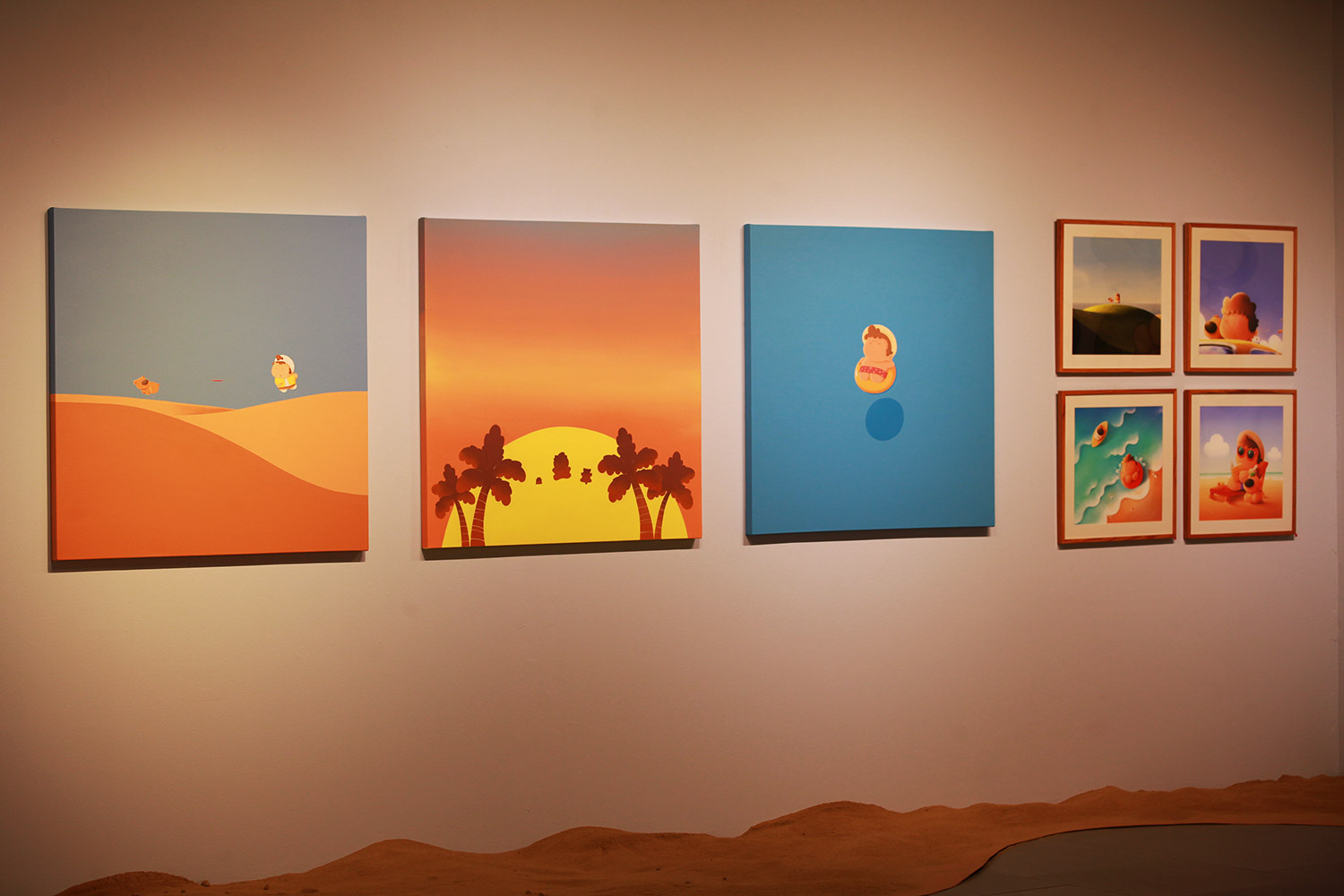 The exhibition features three acrylic paintings that depict Tuagom having fun with Buddy on the sandy beach and in the sea.

"I had never painted on canvas with acrylic before, but I wanted to challenge myself and wanted to present both digital and acrylic paintings. It took a lot of time to finish the paintings, but it was fun," said Pazut.

Pazut came up with the idea of Tuagom after he drew imitations of many characters, but he wanted to create his own character. The original Tuagom was skinny and had long arms. After Pazut went for a graphic design course at San Diego State University, he modified Tuagom. 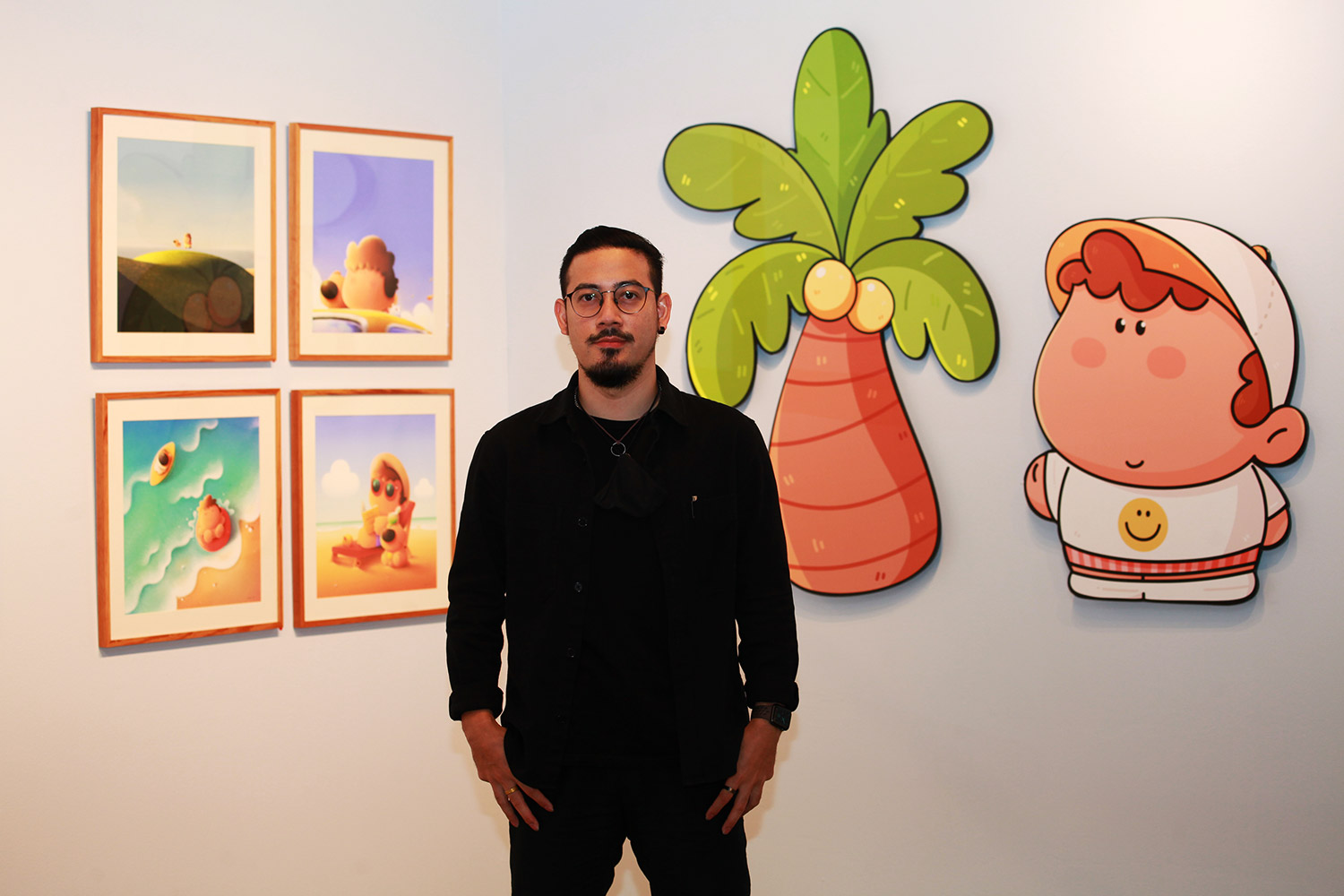 "While I was in San Diego, I felt exhausted since I had to rely on myself. I found that I had to keep a positive frame of mind in order to keep going. Tuagom was developed from a snowman. He is like a child, so he is innocent, sincere and positive," said Pazut.

With positive vibes and a sense of humour, Tuagom has turned around a bad day for many people.

"A girl sent me a message that saying she had bad month, but after she read posts about Tuagom on Facebook, she could smile. I was touched. I want to create something positive for the world and when I receive such feedback, I was happy. This comment energised me and made me not want to stop drawing," Pazut said.

"Shall I Compare Thee To A Summer's Day?" runs at RCB Galleria 1 on 2nd fl., River City Bangkok until June 26. Admission is free. For more information, visit facebook.com/RiverCityBangkok.