Sitting in the front row of an independent movie house, Piak Poster, 90, looks at a photo of his original work on screen -- the pulpy handmade bai pid or film poster of Fah Talai Jone (Tears Of The Black Tiger, 2000). However, he could not remember how he made it, let alone its tear-jerking storyline and characters.

"I don't know what these scenes are about. I haven't watched the film," he said. "A movie promoter would tell me about key scenes and I would design and paint them."

It was his last film poster as an oil painting, a reminder of the heyday of Thai cinema. Dating back to the 1930s, they were advertisements for upcoming programmes. With the advent of digital technology, hand-painted posters became a dying art.

"I have nothing to do these days, but I can sketch for fun," said Piak, or Somboonsuk Noyomsiri, in his first public appearance since the coronavirus pandemic began. He is now living with his daughter in Nakhon Phanom.

"At 90, my eyes aren't good. My hands aren't as stable as they were before. I am tired. Despite doing a rough sketch, I have to sit and hold my breath. After getting old, I haven't painted as much as I used to," he said. 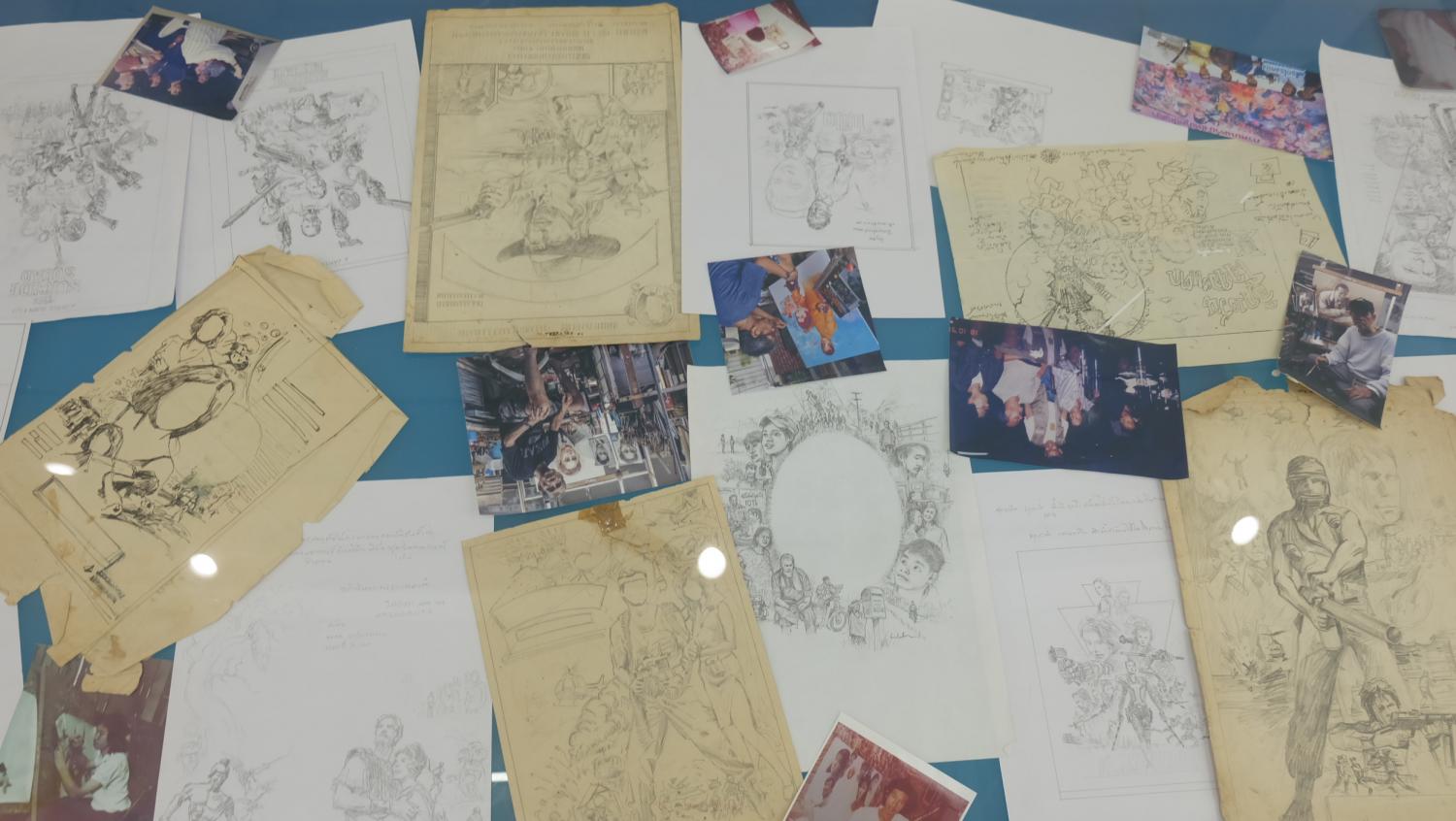 The 1950s and 1960s saw the emergence of iconic film poster artists, including Piak, but after a crash course in Tokyo, he turned into a director who helped influence Thai screens of the 1970s. His classics include Tone (A Man Called Tone, 1970), Duang (Luck, 1971), and Choo (The Adulterer, 1972). After his last film Bin Laek (Crazy Flight, 1995), he painted again, though not seriously. He became a national artist in the field of cinema in 2015.

"While making films, I stopped painting. I wrote scripts and did storyboards for the crew, but let my students carry the work forward," he said. "Now, they are better than me. They can paint faster and deeper."

For his 90th birthday, his students are reviving the lost art of film posters. Woof Pack Projects, Doc Club & Pub and the Thai Film Archive have joined hands to hold the "Bai Pid" exhibition, which is now on view at Woof Pack Gallery. In light of this, Somdej Santipracha and Banhan Thaitanaboon recall their teacher Piak's legacy. 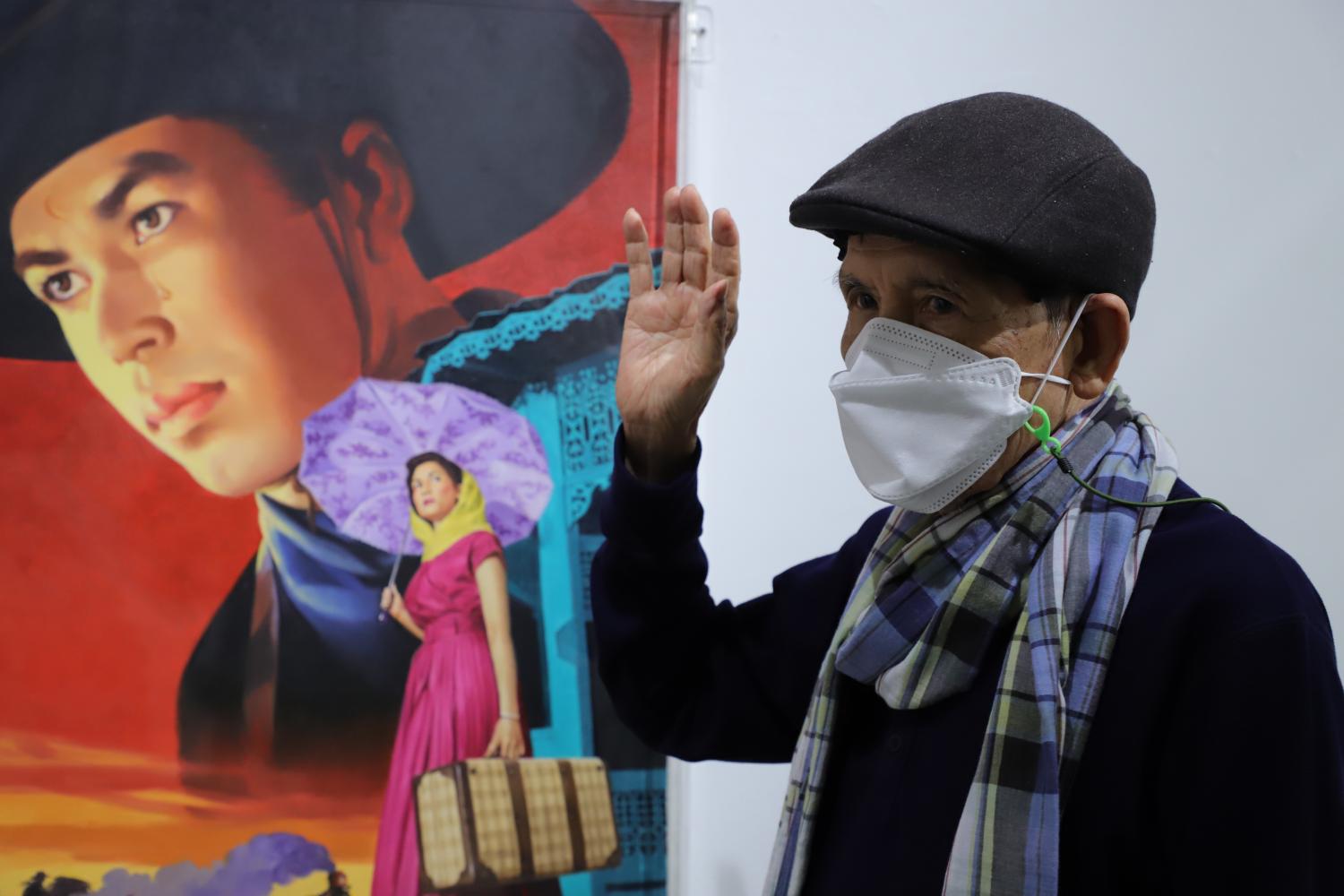 "Piak is a pioneer in that he set off a national boom for posters and films," said Somdej, a film poster artist turned director. When Piak taught at a vocational school, he asked his teacher whether he could become his apprentice. After graduation, he worked for his studio where he drew small characters in the background for many years.

"He never taught me, but I learned through the back door," he said. Piak often got up at 3am to paint. He found that he did so because the damp environment in the early hours makes colours dry slower. He also invented gadgets, like airbrushes and iced palettes, to slow down the drying time.

"He would finish the job at 6 or 7am. I admire his creativity. If you go to his studio in Pak Chong, you will find a hydraulic painting table. While making films, he rented a dolly and asked a turner near his house to replicate it," he said.

Piak employed staff painters to cope with the heavy workload. Somdej said they painted film posters day and night. It was not until his 20s that he left his studio to work freelance. Piak was a film poster artist who ventured into filmmaking successfully, paving the way for others to follow. 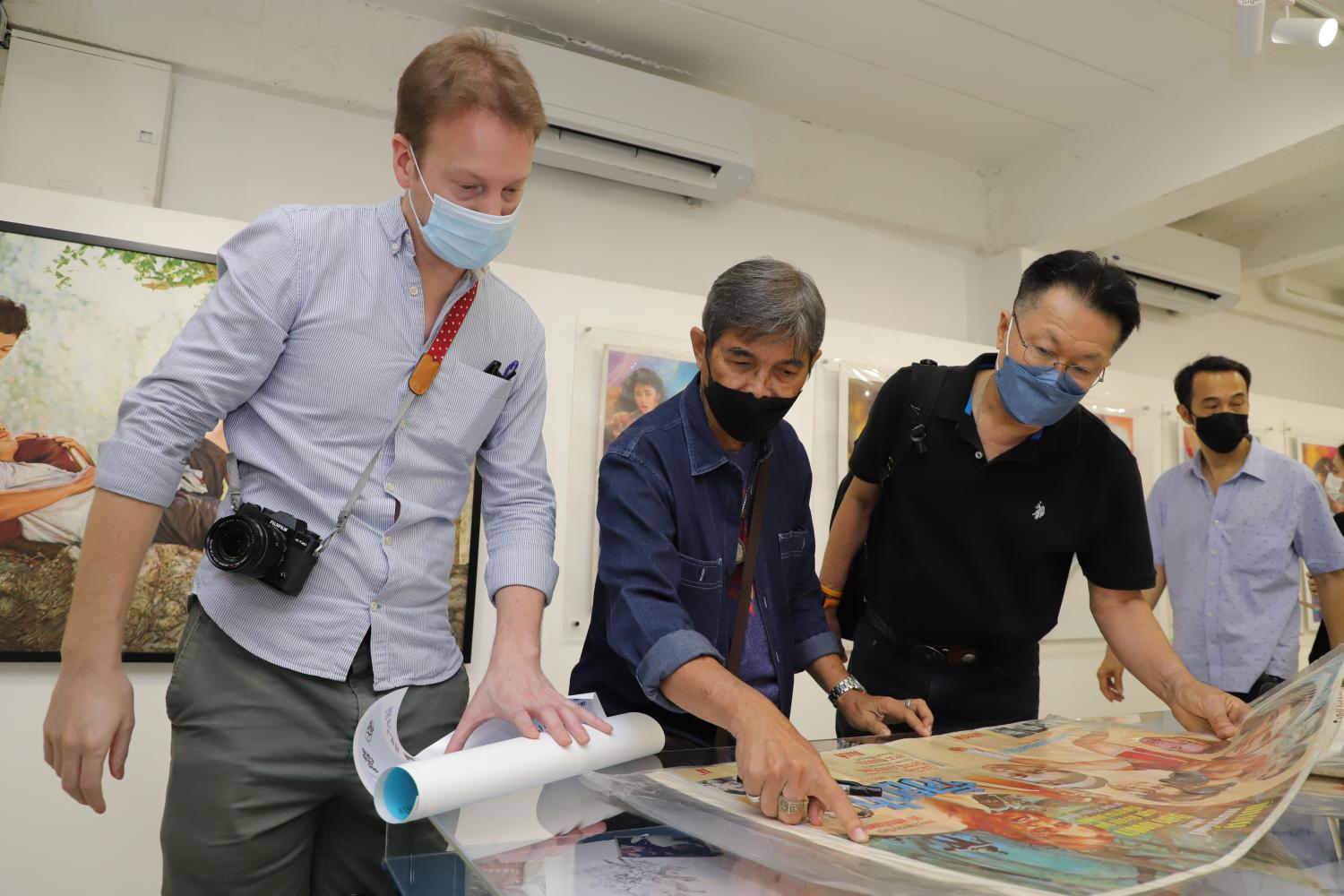 "He is a genius. He collects all kinds of paints and brushes. He cleans brushes in oil and hot water for long-term use. His palettes are very clean. His paints come in all shades. I am a bit of mess," he laughed.

After painting film posters, Somdej directed movies for over a decade. After the first film Nak Rak Wai Krator (Thai Pop Stories, 1979), others followed until his last one Than Khun Noi Noi Haeng Siam (A Time Between Time) came out in 1993, but soon after its popularity began to wane.

Somdej wants to paint again, but the idea of preparing tools bothers him. Instead, he is pursuing a new hobby -- creating new film covers by computer -- but he is not planning to show them for now. "I get up at 4am to work on it. I can churn out four pieces per day. It is like painting bai pid. It is great fun," he said.

"When I saw his work, I wanted to follow in his footsteps," said Banhan, though Piak was not his first teacher. In those days, he dropped by a cinema in Songkhla's Hat Yai to watch a painter in action every day. Knowing that the boy took an interest, the man gave him lessons. After completing junior high school, he painted there for four years. 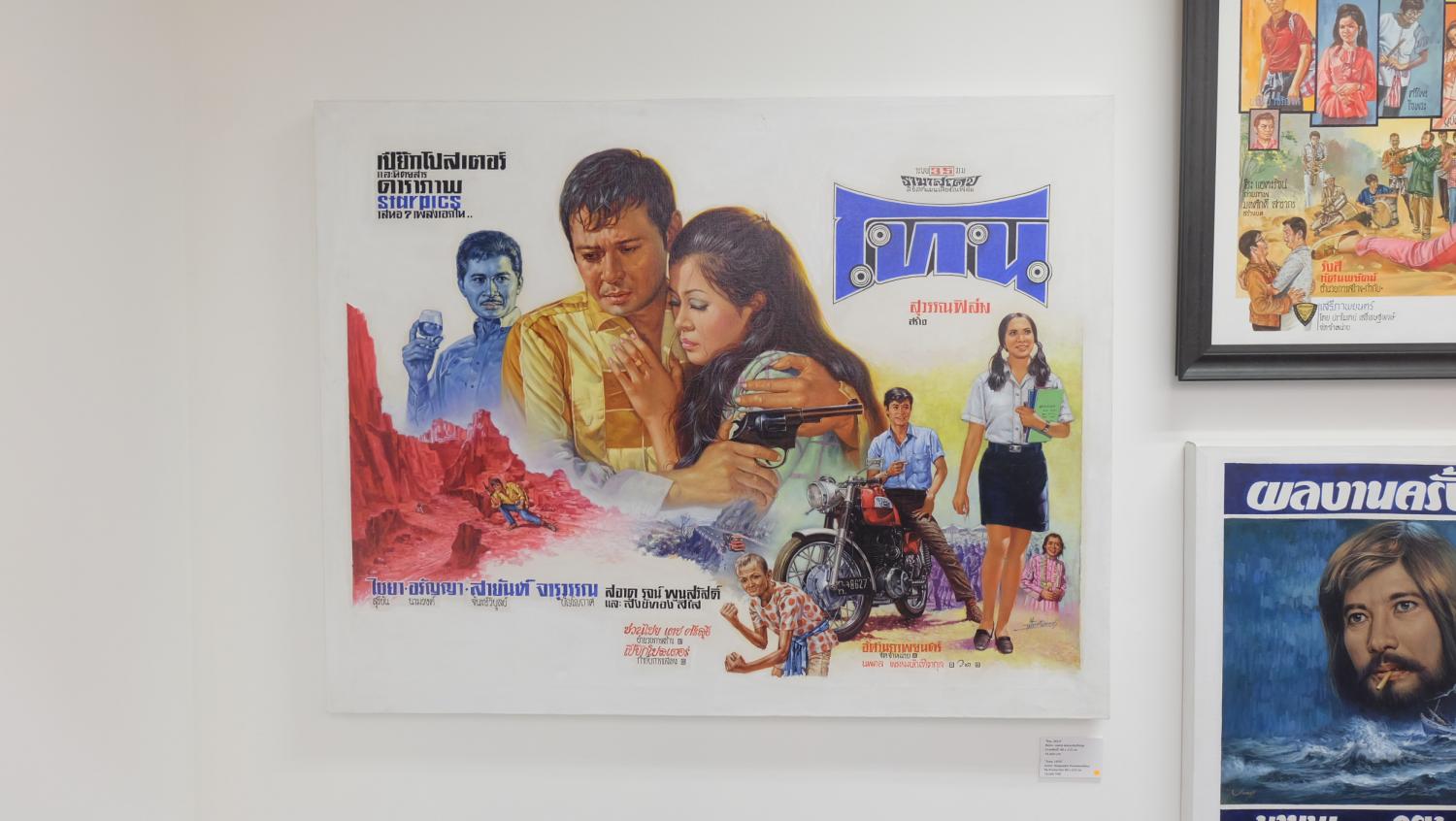 "The turning point came when Piak opened an art school in 1967. At the time, I looked up to his film posters and felt happy to paint like them. I thought if I applied to his school, he might be impressed with my skill and offer me a job. After he saw me paint in class, he spoke to me in private and asked me to work for him," he said.

At the time, staff painters were about to leave his studio, so Banhan filled in for them painting small characters in the background. However, he still went to school because Piak wanted him to be an inspiration for other students. At the studio, he taught him directly.

"Only a piece of glass separated his bedroom from a painting room. While he was sleeping, I was working. He would take a look and pass on some advice, for example, about controlling a brush and softening faces. While I was painting the film poster for Choo, he taught me to smoothen the square-faced shape of Krung Srivilai," he said. 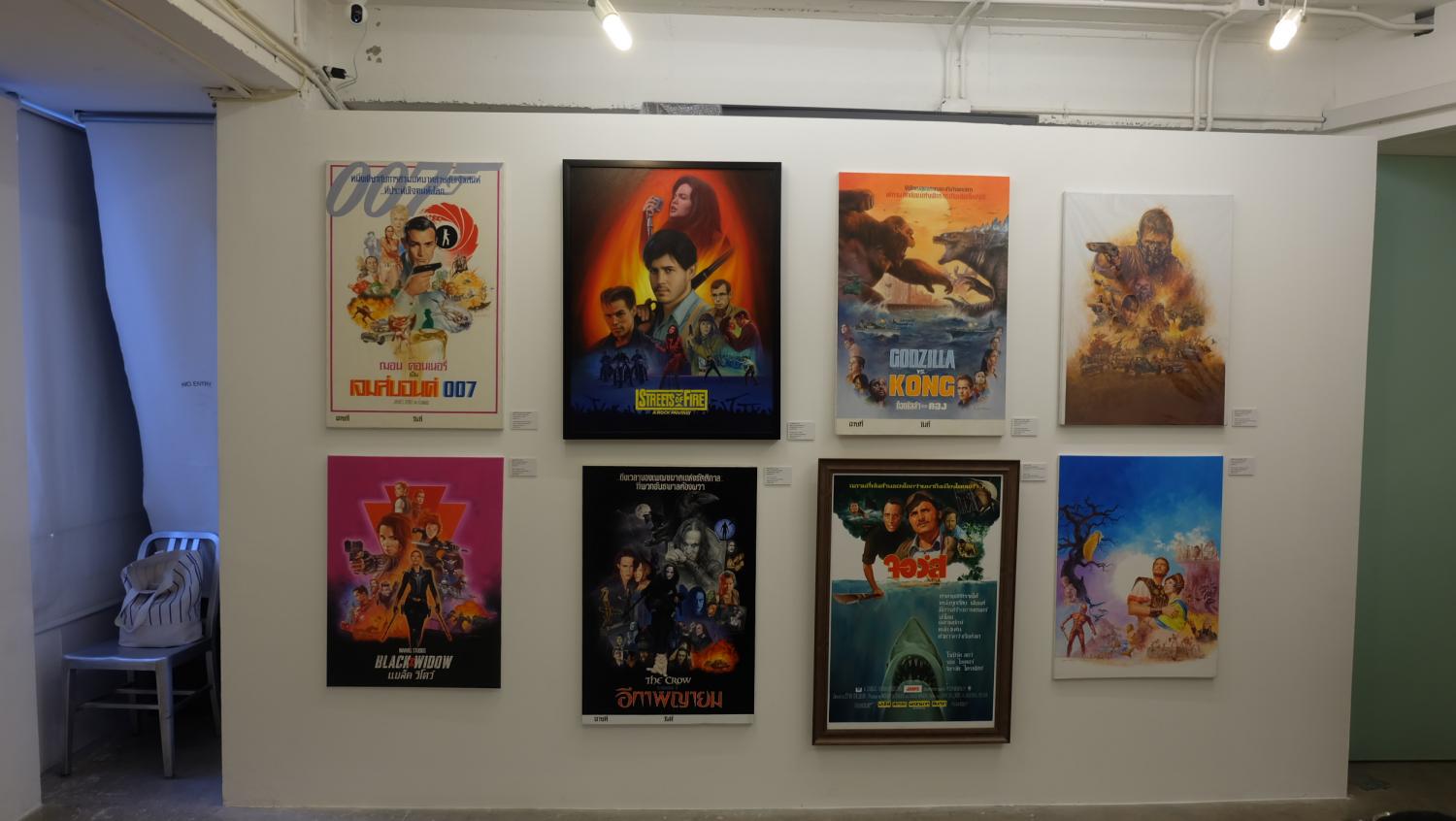 Located in a small room, most film posters are painted by Banhan Thaitanaboon. (Photo: Thana Boonlert)

When Piak became a filmmaker, he no longer had time to manage a studio and therefore asked his student Banhan to work on his behalf. He dealt with movie promoters, handled financial matters and reproduced Piak's signature on film posters. When Piak finished directing Choo, he passed on the business to him.

But it is far from a solo endeavour. Banhan said after making compositions, he assigned tasks to staff, but regularly checked and told them to make revisions before putting his signature on posters. He said some of them did a sloppy job because they wanted to hang out and bet on snooker.

"Some movie promoters spoke to me in private and said, 'I will give you extra, but can you paint alone?'. I had to do it because we were close. They valued my attention to detail. I wanted to follow my teacher. No matter how small the characters were, Piak painted them well, especially gangsters," he said.

Banhan's early works were painted in poster colours, including Mue Peun (Gunman, 1983) and The Story Of Nampu (1984). Then he changed to oil paint. One of the film posters is for Sud Pralad (Tropical Malady, 2004), directed by Apichatpong Weerasethakul.

Banhan is now a portrait artist. At some point, he was commissioned to reproduce his own work, but he used oil paint because he had not used poster colours for a long time. It is bringing back his passion for the dying art. "I will give it a try next year. I am getting older. It is now or never. I don't want it to fade away," he said. 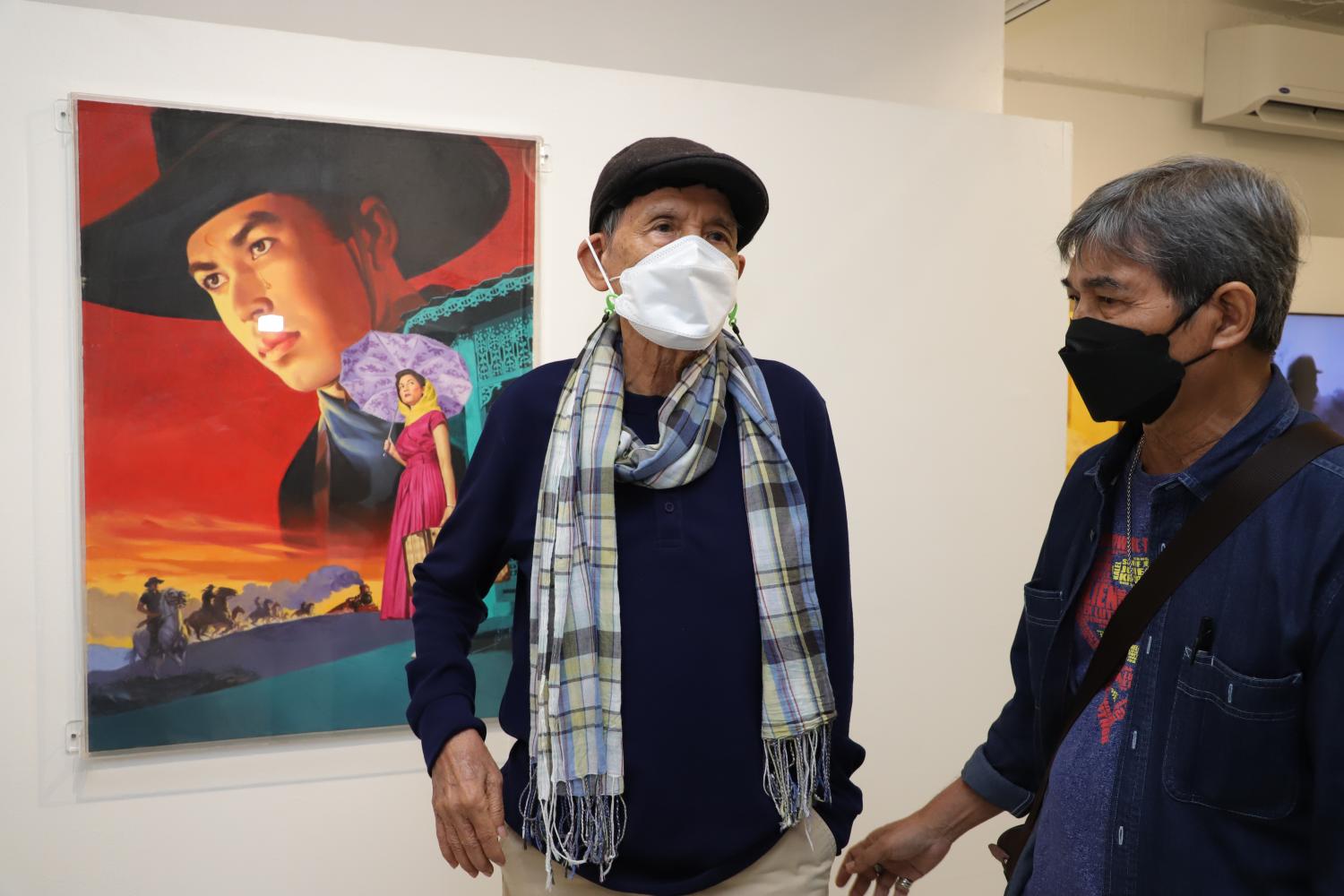 It is more than time, though. He rarely keeps old film posters because his house-cum-studio was home to eight staff painters. It did not even have enough sleeping space. He also donated some of them to the Thai Film Archive.

"Frankly speaking, it is like throwing away 10 million baht," he laughed.

The "Bai Pid" exhibition is running on the 2nd floor of Woof Pack Gallery in Sala Daeng Soi 1 (MRT Lumphini or Silom) until July 17. It is open daily from 10am to 9pm. There is no admission fee. Visit facebook.com/docclubandpub. 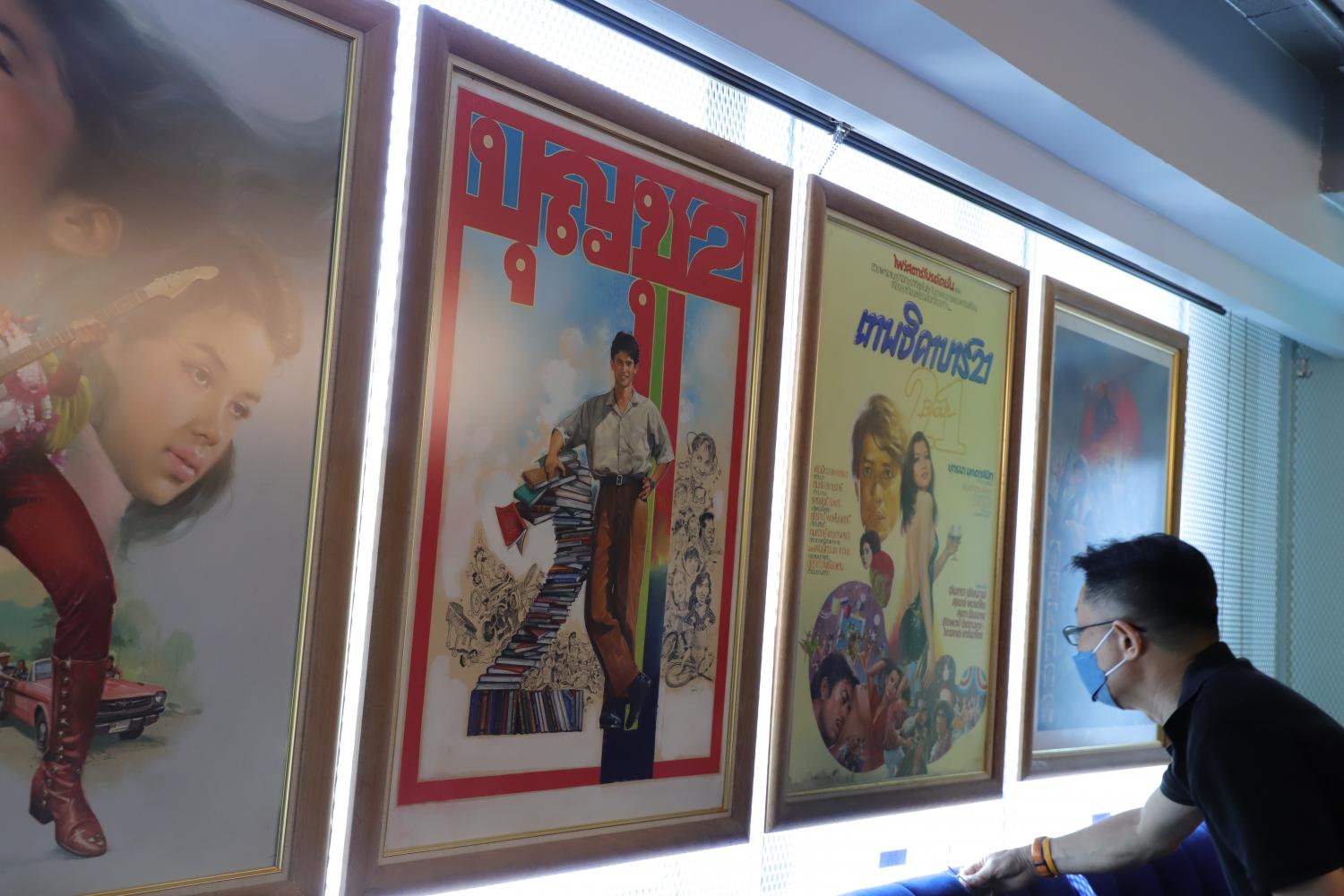 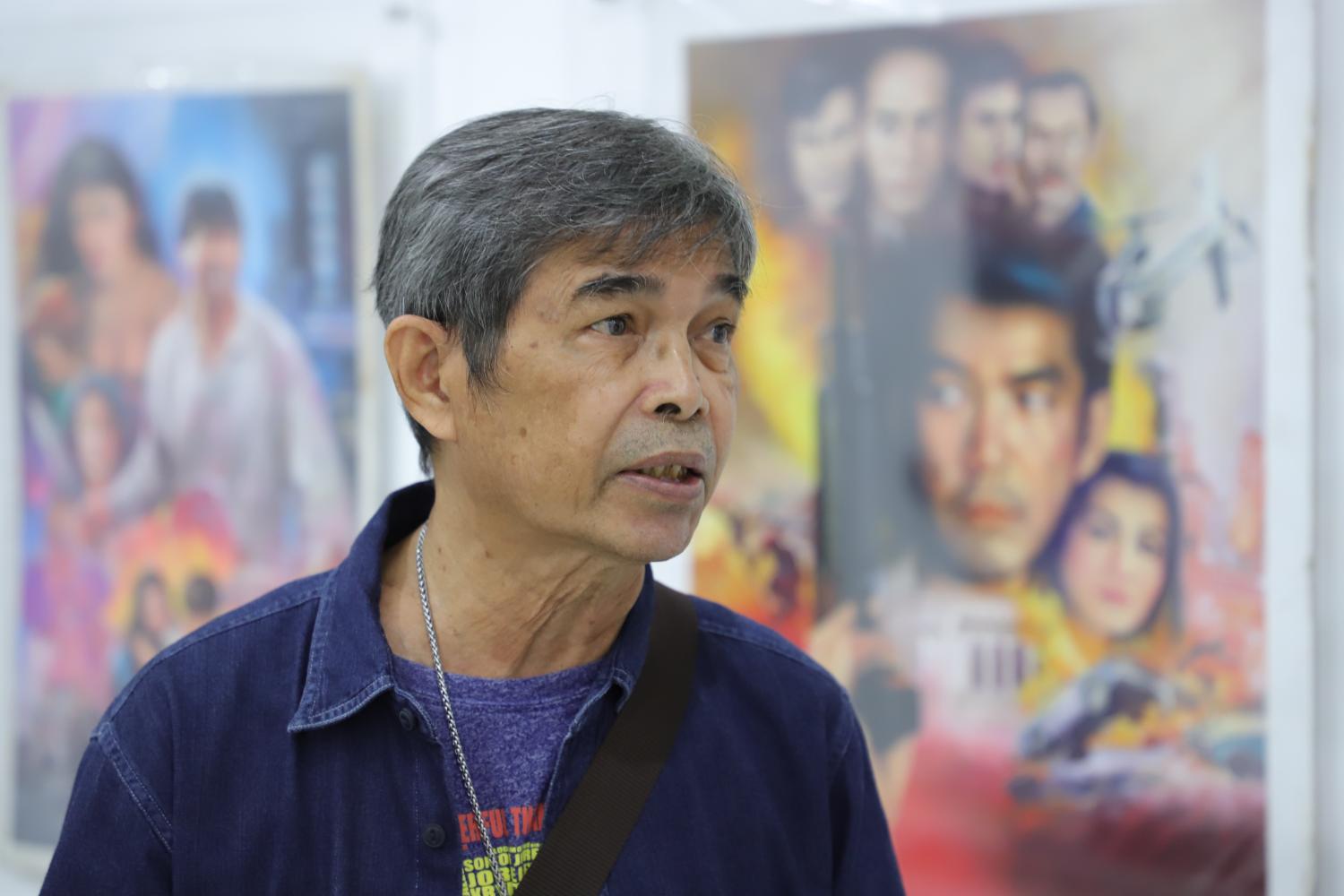 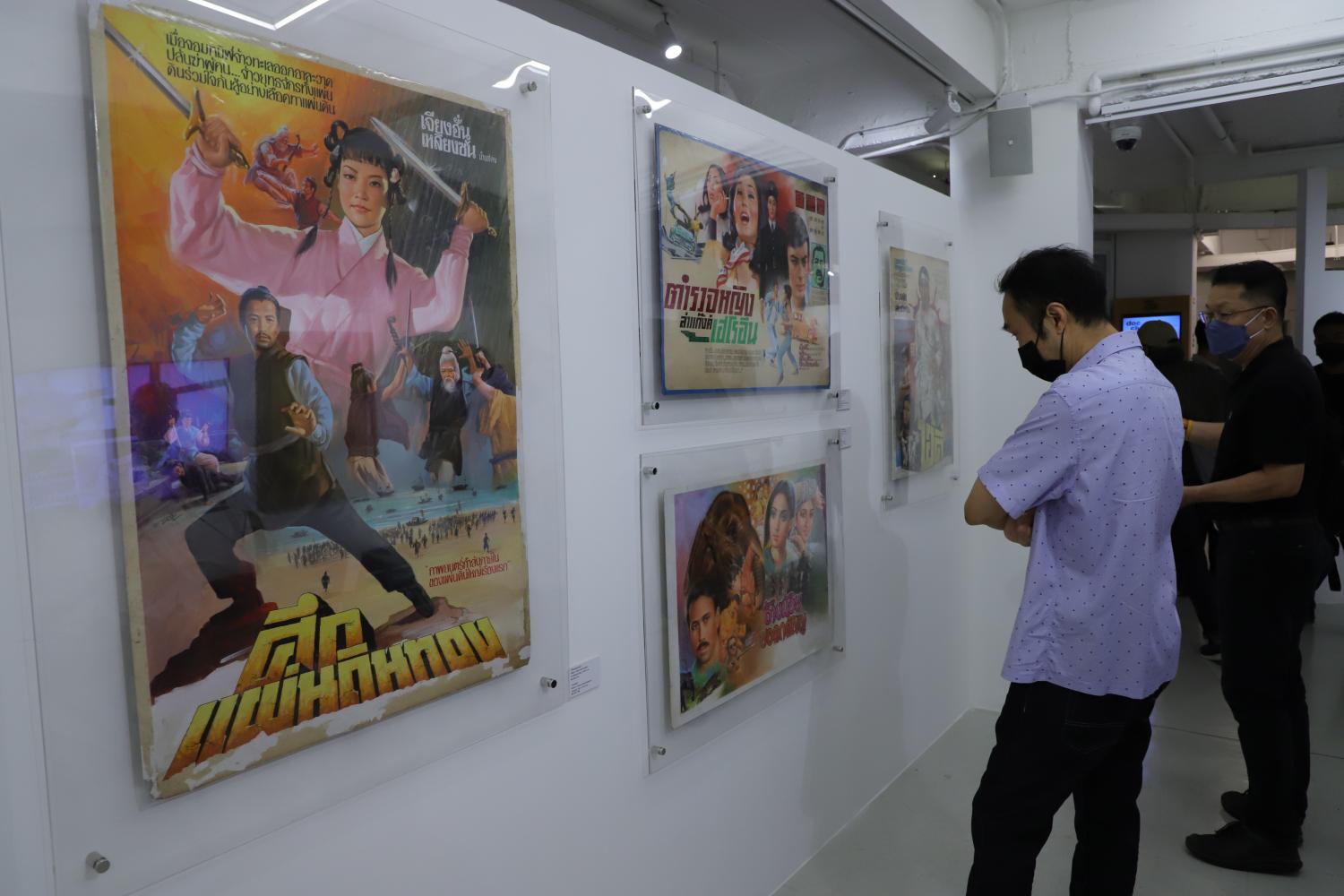 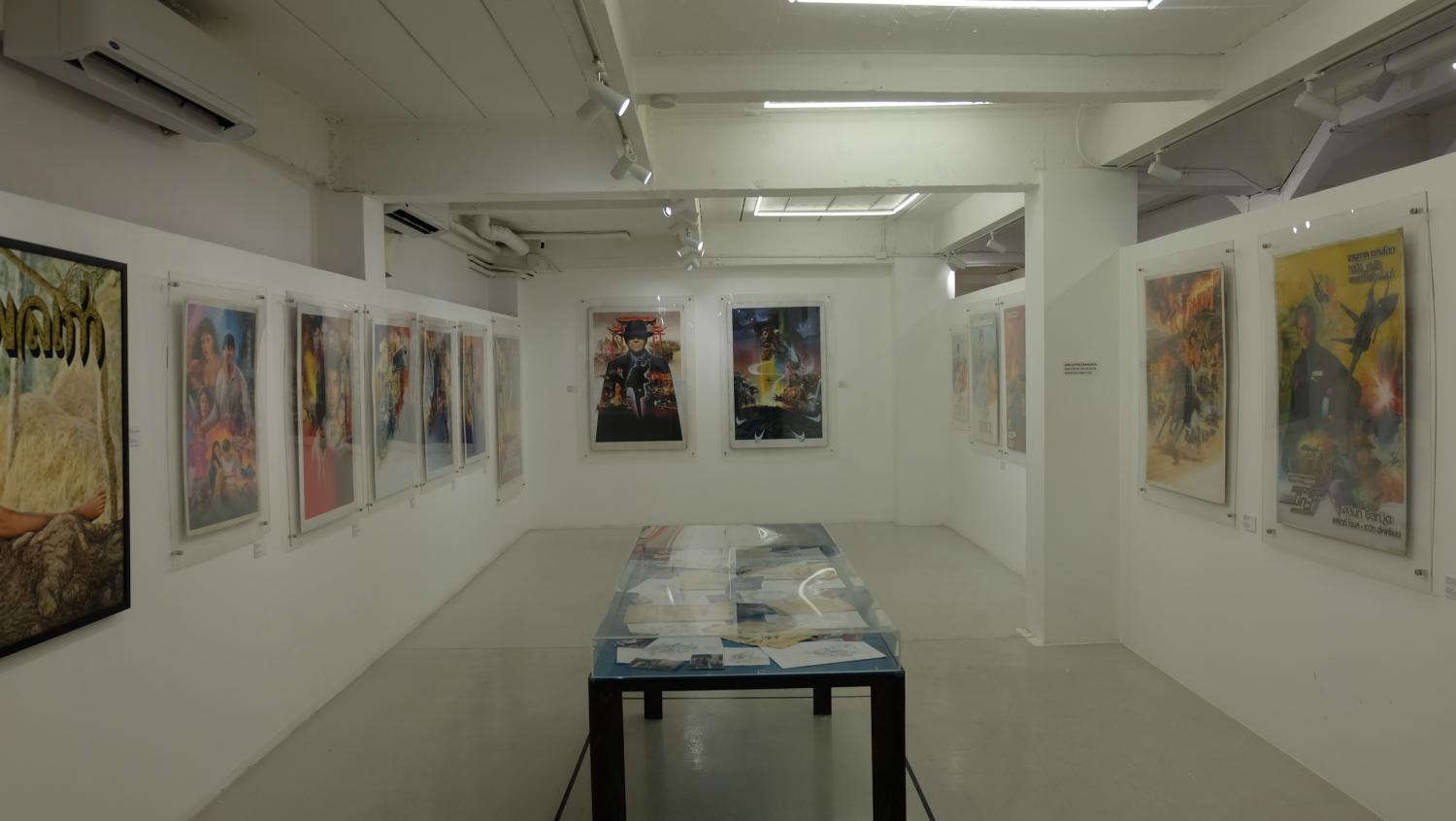 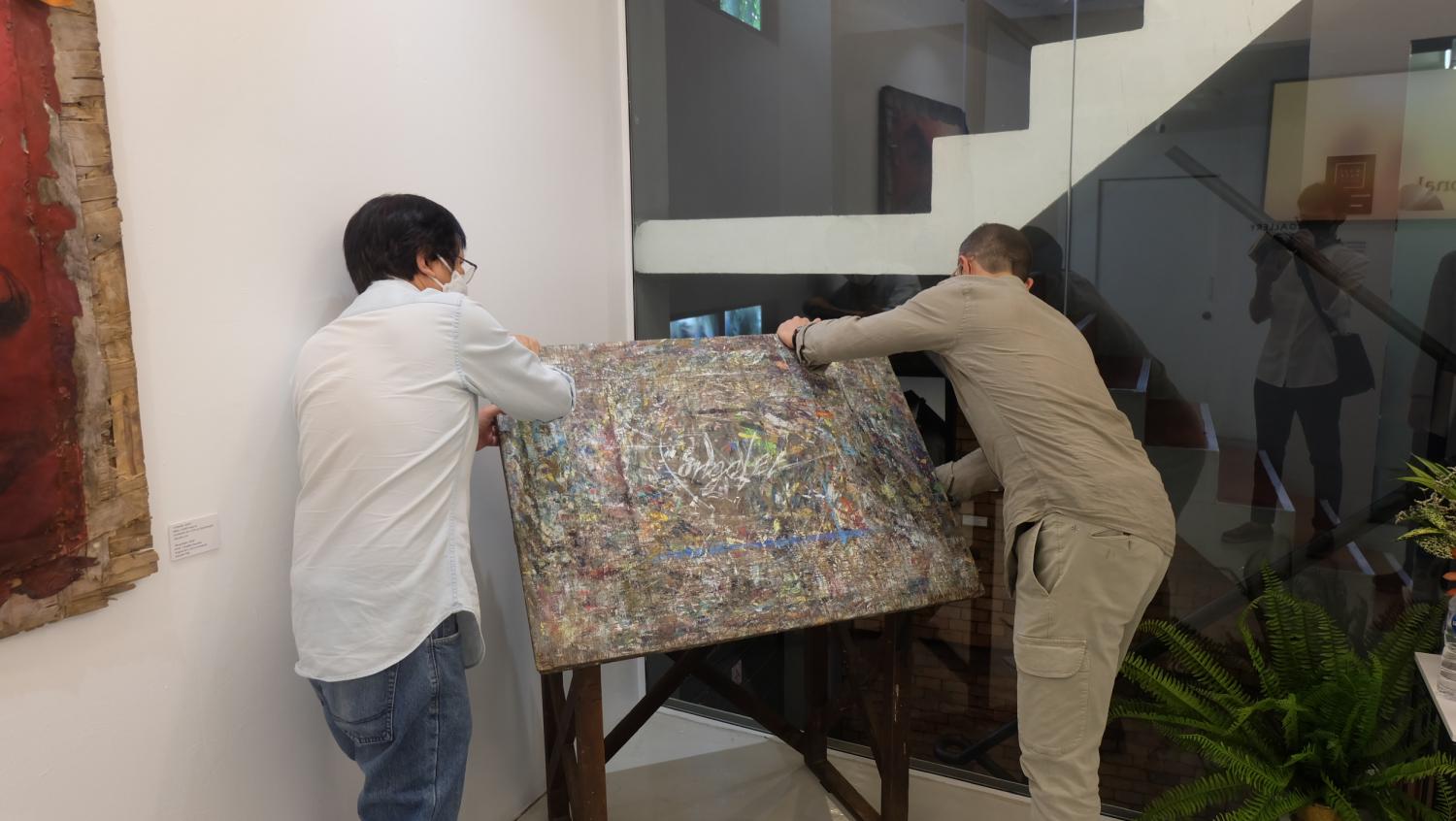 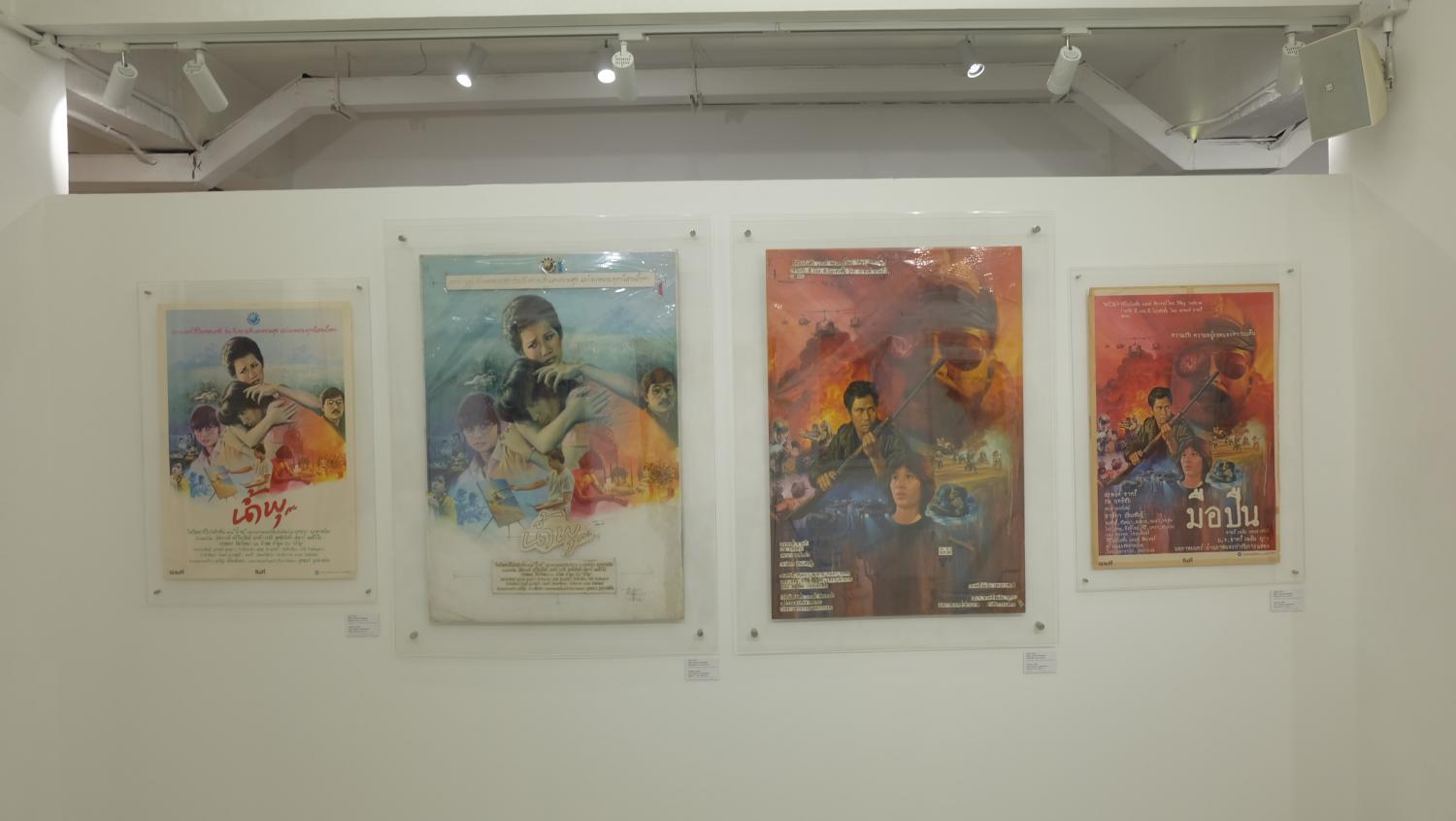 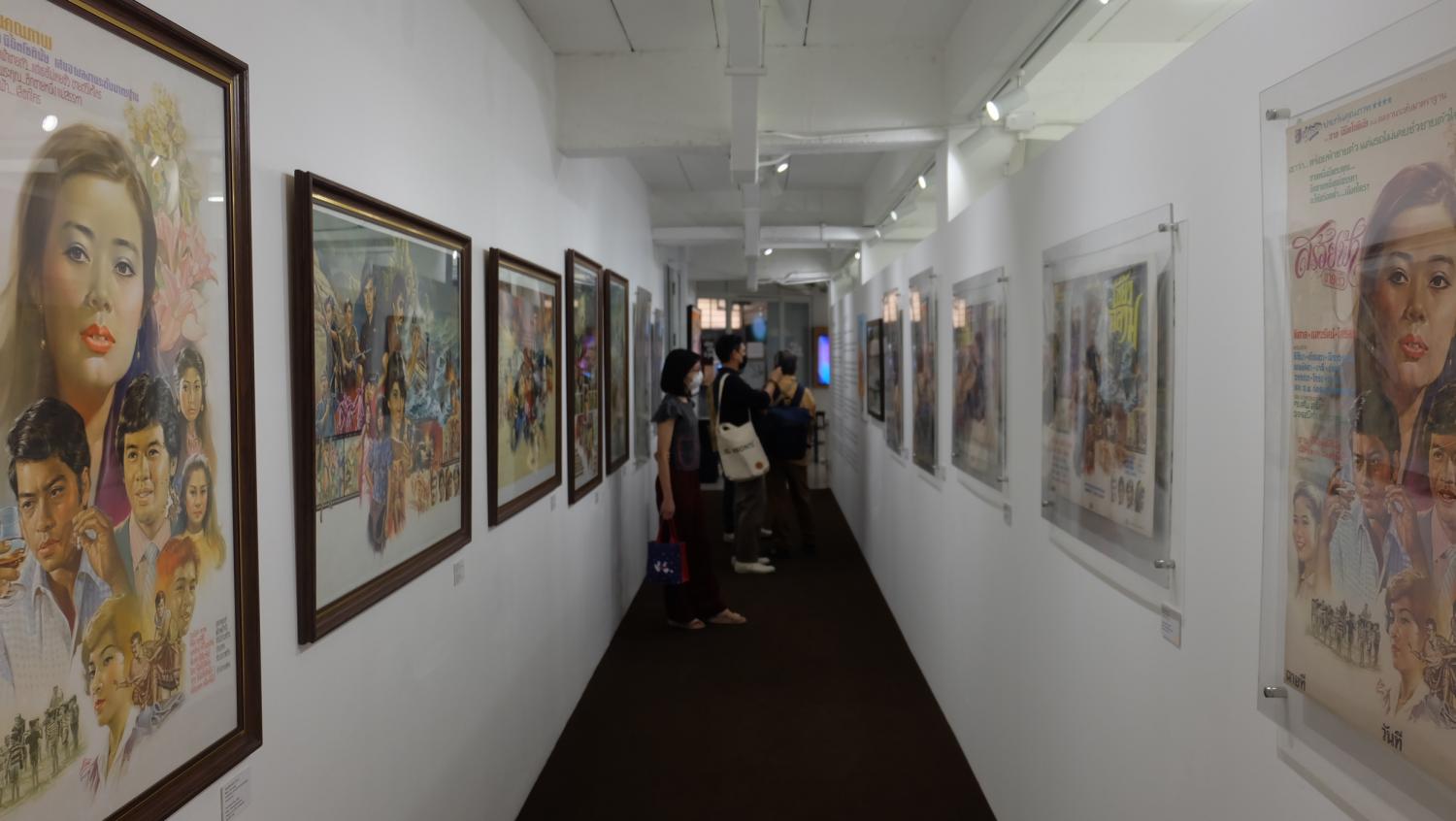