Not for decoration
Life
Arts & Entertainment

To raise awareness of the importance of collecting in the Thai art ecosystem, the Bangkok Art and Culture Centre (BACC) held the exhibition "Crossover: The Unveiled Collection" in 2005. The exhibition presented a collection of Thai artworks by local and international collectors. This year, in collaboration with the Thai Art Collector Association (TACA), BACC presents "Crossover II: The Nature Of Relationships", which showcases 72 paintings from 11 organisations and 10 private collectors.

"TACA helped us to collaborate with many organisations and we tried to persuade people to realise the value of their art collections, which can be more than decoration in executive offices, and allow the collections to speak to the public," said Suebsang Sangwachirapiban, head of BACC's exhibition department.

"Allowing paintings from the past to speak to viewers is giving those paintings life. It is like 50-year-old paintings time-travelling to talk to the young people of the TikTok era. Some people from organisations told us that they can feel the aura of their paintings at the exhibition due to the atmosphere and presentation. From those comments, we hope that after we made those paintings come alive, many organisations will collect more art pieces, review their collections and art preservation and increase their support of art activities in the future."

Suebsang said the exhibition presents relationships between art, artists and the environment during the Thai modern art period from 1945 to the end of Tom Yum Kung financial crisis in 1997 leading to the new millennium. He explained that "environment" does not only refer to green space.

"Environment is not limited to only green spaces or nature, but refers to anything surrounding artists in terms of tangible and intangible elements. It can be objects, subjects, the artists' thoughts or subconsciousness," explained Suebsang.

Suebsang said that artists during the modern Thai period expressed their viewpoints and attitudes through their artwork instead of only serving as an expression for religion, as had been the tradition.

He explained that the BACC selected art collections from 1945 to 2000 because it was the period when Thailand's first higher art education institute, Silpakorn University, was established. Also, the Tom Yum Kung crisis in 1997 caused many financial institutions to sell their assets, including their art collections. It was the beginning of many private collections since a lot of art was being sold at low prices. 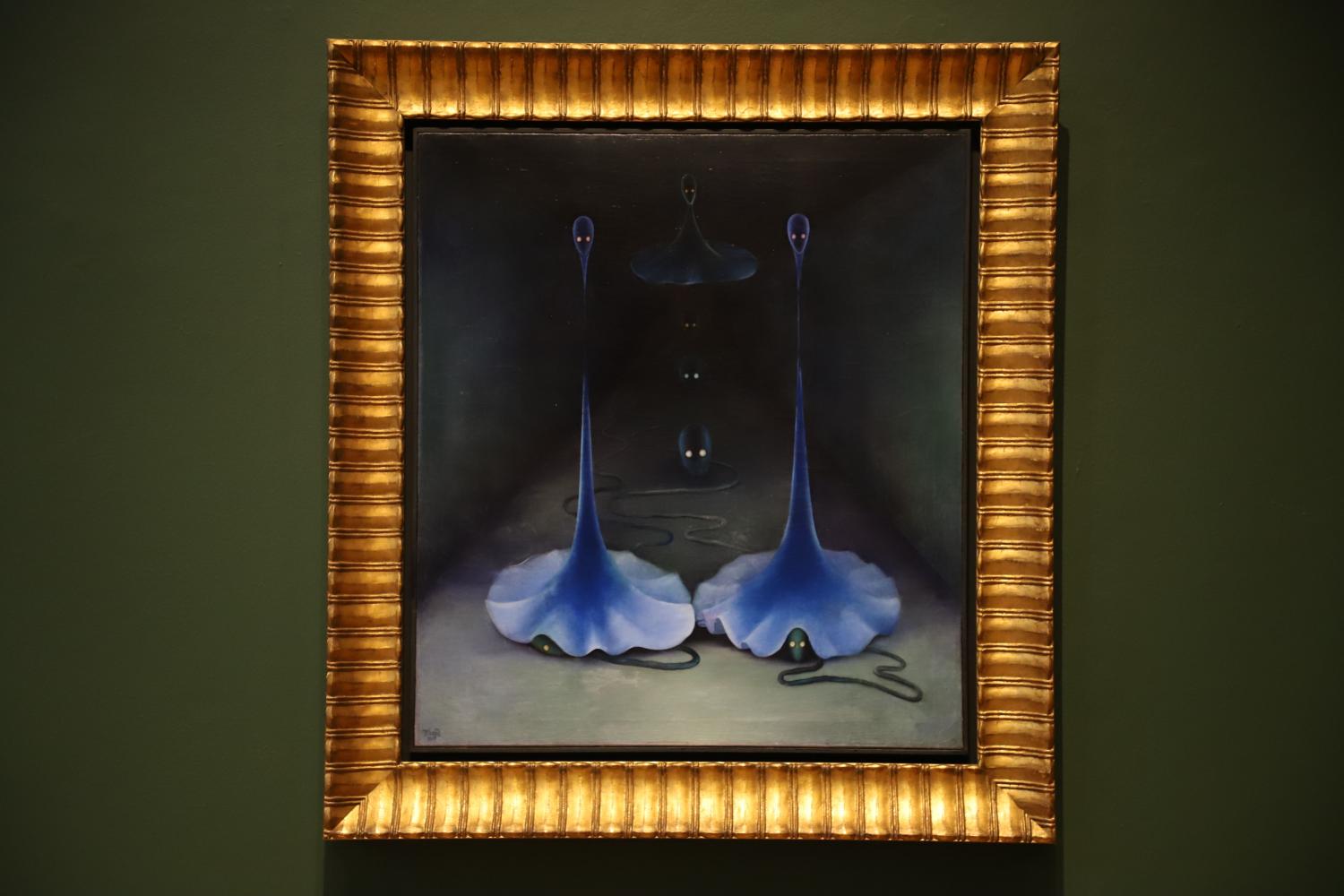 "Artists of the Thai modern art era presented their works in Western styles, but their content was localised. We see artists who experimented in their works by using various materials and tools. We saw a collage piece made from thick Western magazines. Chakrabhand Posayakrit is an artist who used unusual materials; he mixed rice water with tempera for an untitled painting in 1967. Some artists were poor, so they used any materials around them to create their works. At the exhibition, viewers will see artworks that were created by various techniques, presentations and interpretations. Each painting is unique with its own identity," Suebsang said.

He explained that the 72 paintings were selected because they offered the best cross-section of Thai modern art.

"We tried to not select the same artist and tried to find rare works that may not be the best, but we wanted them to have an opportunity to be displayed to the public," he added.

The exhibition's paintings are divided into six distinct groups: Scenery, Site of Beliefs, A Part of Mind, Surrealism, The Nature in Abstraction, and Social Criticism.

Suebsang selected a couple of paintings to exemplify each category. In Scenery, Rowing In A Canal (1966) by Niro Yokota mixes watercolour and quick bold lines. This realistic painting depicts excellent natural sources. Hut (1977) by Pratuang Emjaroen influenced the artist to turn to abstract art.

For Site of Beliefs, the painting The Hell (1956) by Sompot Upa-In caught Suebsang's eye. Sompot created this aesthetic visual on pinewood using an extraordinary colour technique. Viewers can see shading and gradient colours. 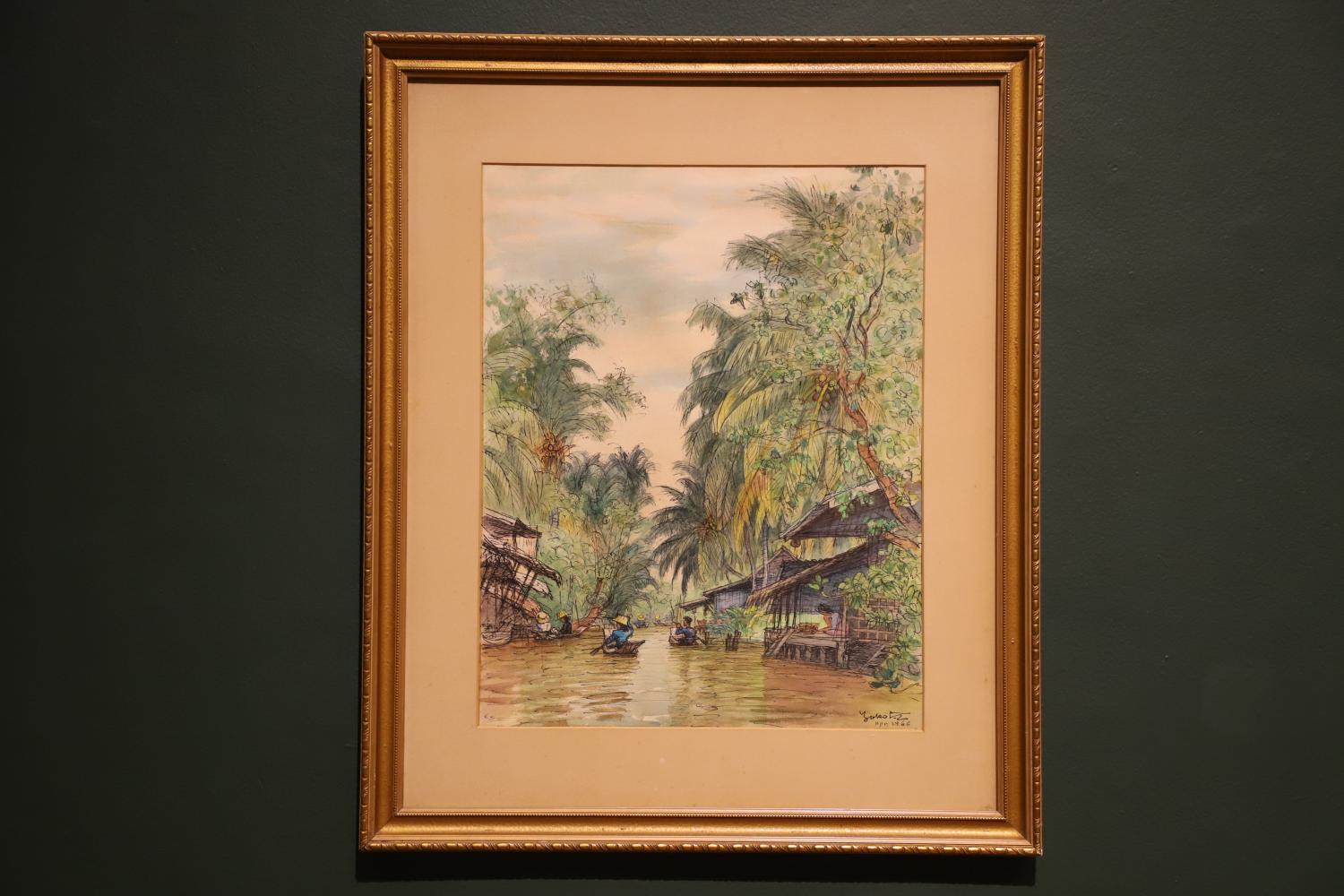 Sorrow (1970) by Suchao Sisganes in the Part of Mind section, expresses the viewpoints and/or the subconscious of artists. Sorrow presents Suchao's humble desires, such as a house and a lover. Sorrow features vivid colours and intriguing textures that were created with an excellent technique using palette knifes. The background surface of Sorrow was also painted to strengthen the canvas and maintain vivid colours.

The Surrealism section showcases the work of Kiettisak Chanonnart, a pioneer of Thailand's Surrealist art movement. His Dazzling (1972) portrays odd creatures from his subconscious. As the exhibition curator, Suebsang explained that the artist thinks there is something else in our minds. Kiettisak's works tackle dimensions of feelings, human diversity, chaos and hesitation.

"This expressionism painting was painted by hand, not paint brush. Chang used chan na rong, a black material that Thai people use to repair leaks in a boat. The cost of the material is cheaper than oil paint. Chang's artworks relate to nature, so this painting was probably inspired by his surroundings," said Suebsang.

Child Labour (1991) by Lerpong Pudhichart was drawn on paper by pen. It is one of the best examples of Social Criticism, depicting an emaciated child with a factory on his head. The factory releases polluted smoke and water while the child holds a fishbone while a 5 baht coin is attached to his head. 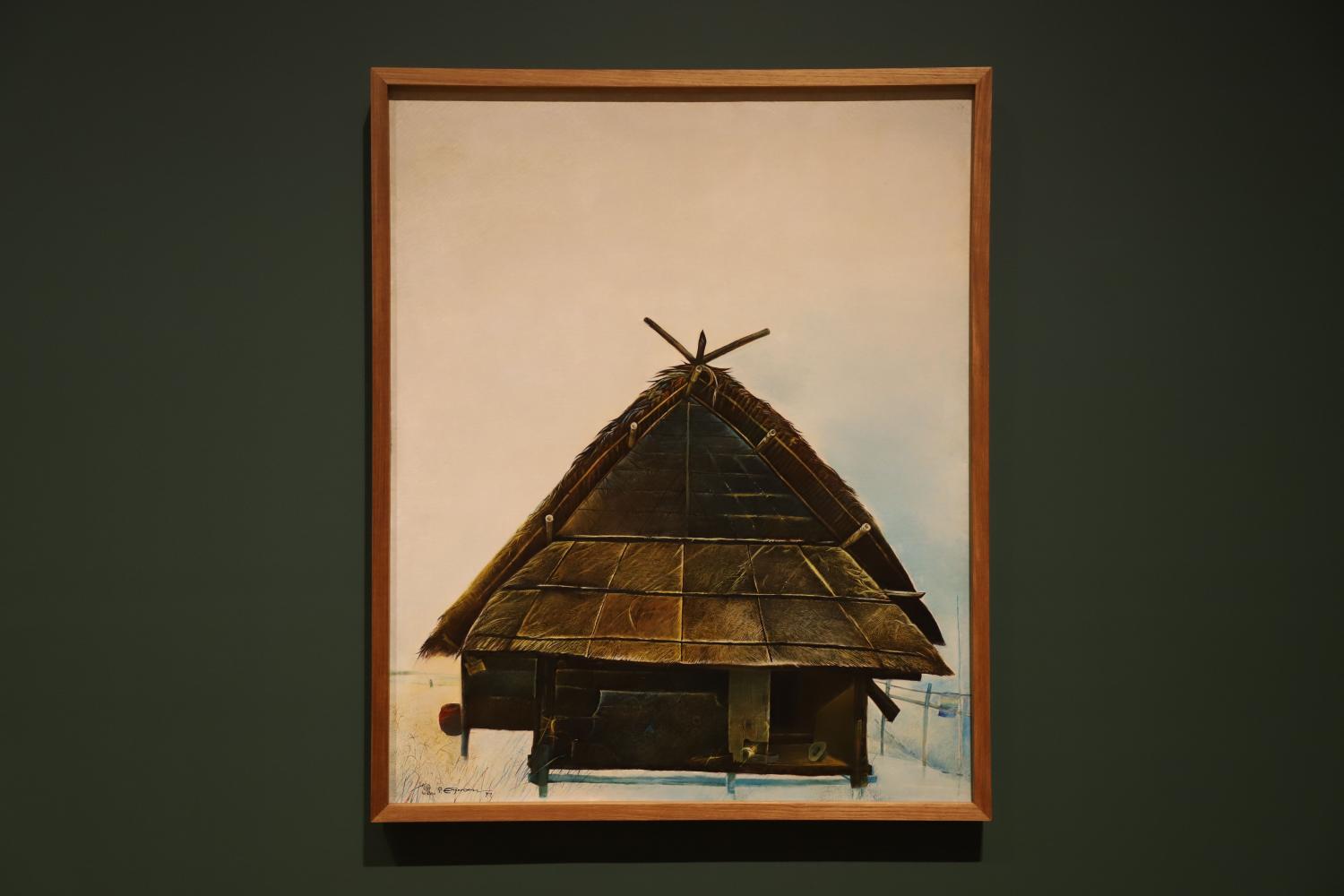 "During that time, I heard news about child labour whereby children are paid only 5 baht per day. The painting reflects the poor quality of life for children in a capitalist society," Suebsang said.

As a tribute to Prof Silpa Bhirasri, the father of Thai modern art, two of his portraits were included in the exhibition, painted by national artists Fua Haripitak and Chakrabhand Posayakrit.

Suebsang hopes the exhibition can reach a wide range of people.

"It is an opportunity for visitors to see what old paintings look like and appreciate their uniqueness. Perspectives in the paintings from the past can reflect the present. We can learn why things in the past changed or disappeared. We hope that the exhibition can reach the public, so many people can learn from it one way or another," said Suebsang.

"Crossover II: The Nature Of Relationships" runs at the Bangkok Art and Culture Centre (BACC) until Sept 11. Admission is free. For more information, go to facebook.com/baccpage. 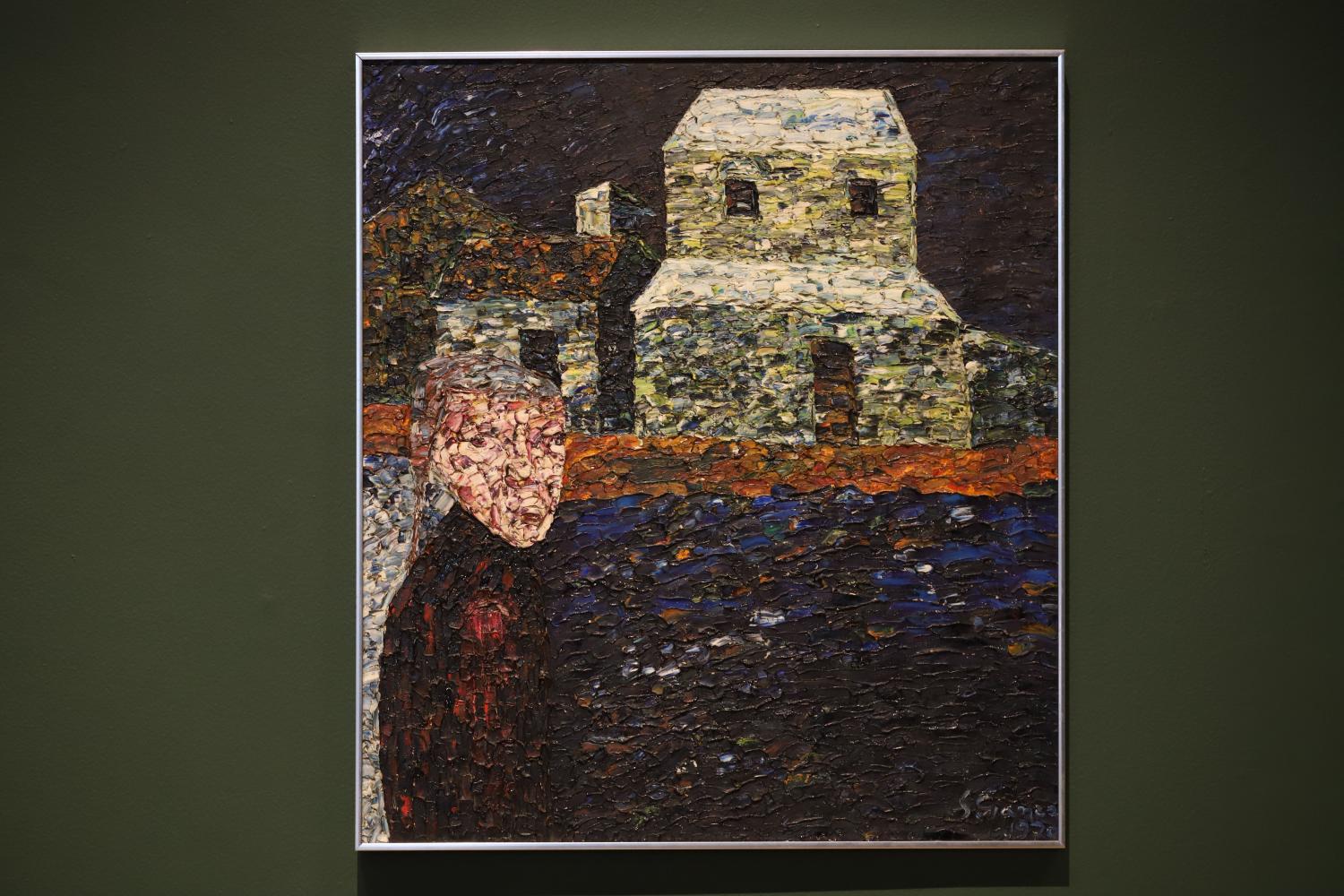 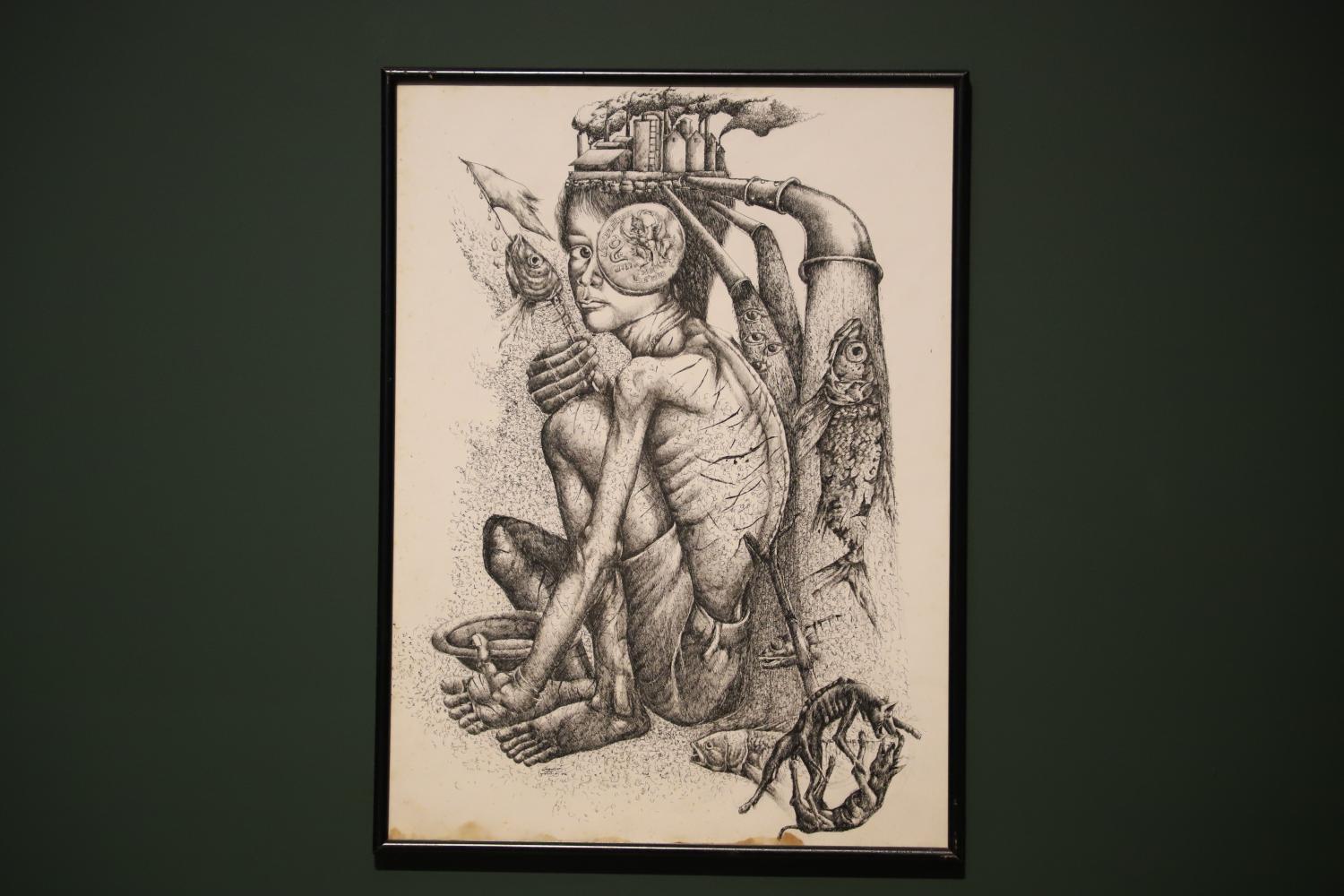 Child Labour (1991) a pen on paper drawing by Lerpong Pudhichart. 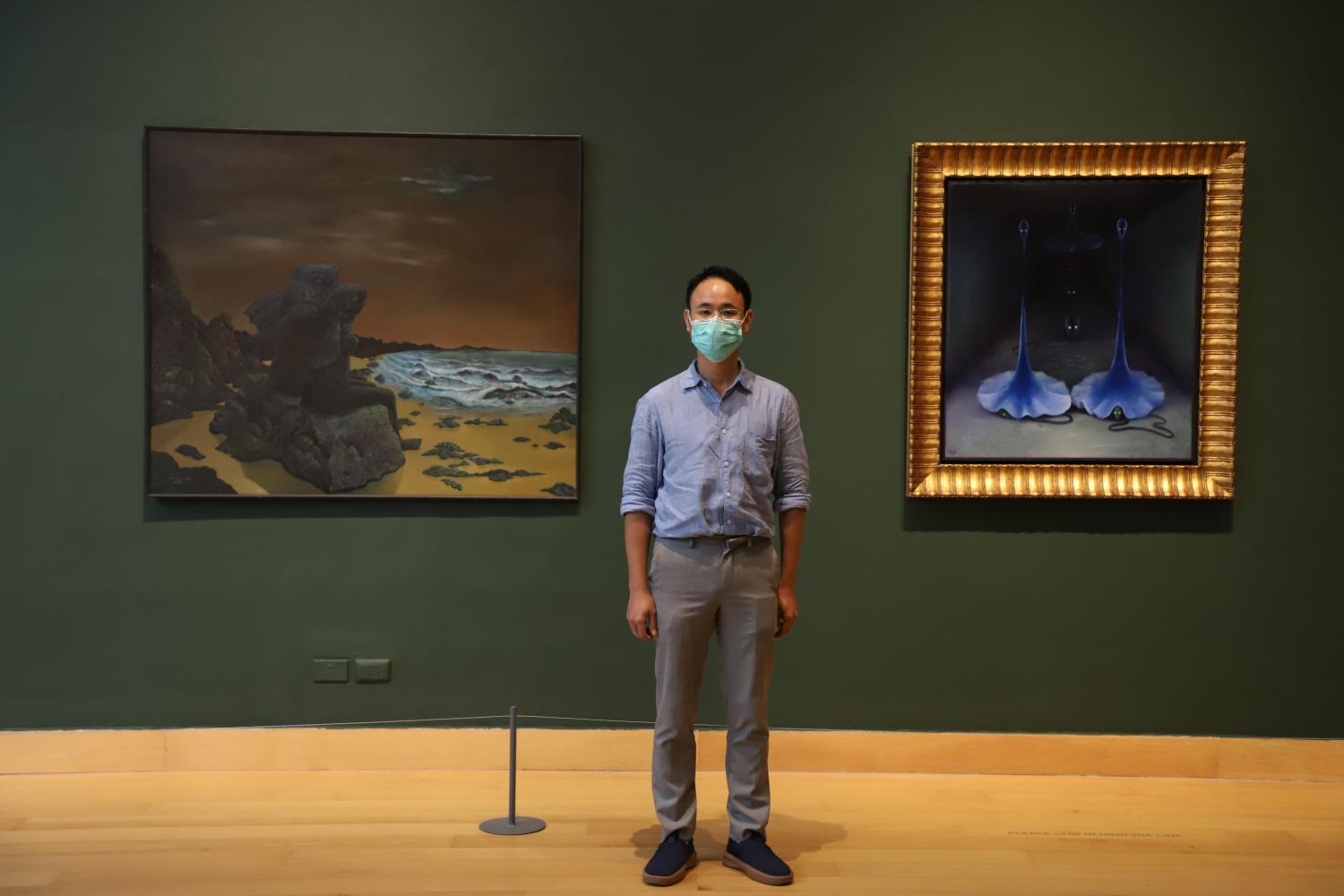 Suebsang Sangwachirapiban, head of the BACC's exhibition department at 'Crossover II: The Nature Of Relationships'.