At a Jakarta crosswalk, Indonesian teens take to the catwalk
Life
Arts & Entertainment

A pedestrian crossing turned viral catwalk has become a site for Jakarta's young fashionistas to express themselves, while attracting the disapproval of police in the traffic-clogged Indonesian capital.

The informal downtown gathering has drawn sartorial adventurists from across the suburbs of the metropolis, including from Citayam, leading it to be dubbed "Citayam Fashion Week".

And with their poses and struts all being shared on TikTok and Instagram, some Citayam pioneers have found instant fame, earning modelling jobs, endorsements and an army of adoring fans.

"I feel like this is the place where I can express my style and create content. It is so much fun because there are so many people and I can meet new friends here. I don't even want to go home," 18-year-old student Ricat Al Fendri told AFP.

He and some friends had taken a morning train to the central meeting spot, tucked between sleek skyscrapers and trendy cafes, to flaunt their outfits for the day.

Police, who previously moved to ban the use of the crosswalk as a runway, now regularly shout through a loudspeaker to ward the crowd off the street.

But that does not deter girls who don wide-legged jeans and colourful sunglasses -- and boys in leather jackets, stylish sneakers and faux-fur coats -- from filming their struts for social media.

Some of the more enthusiastic teenagers have been caught sleeping on the area's sidewalks at night after missing the last train home.

"We have the right to hang out here. It's a public space and for me, it's a great stress reliever from school exams," said Al Fendri. 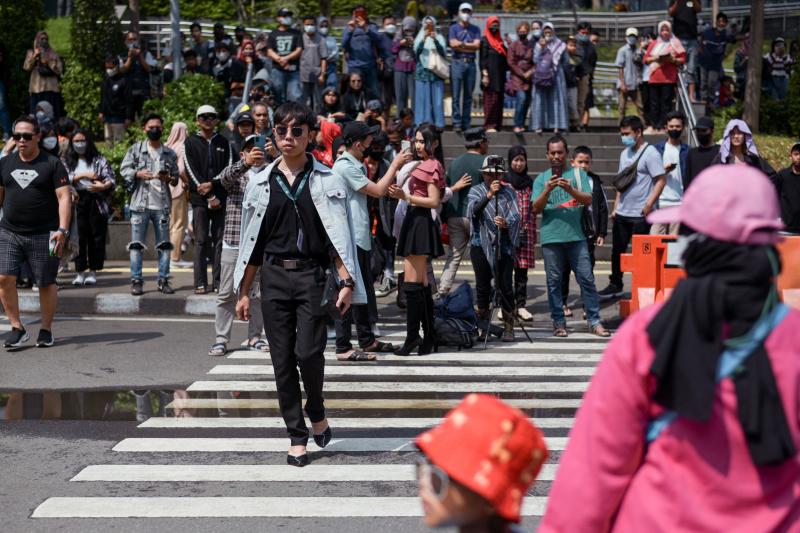 The outfits on display have begun to draw crowds, with news of the phenomenon spreading by word of mouth in the megacity of 30 million people.

Saera Wulan Sari, a 15-year-old school dropout from North Jakarta who makes a living selling clams, comes to watch the crowds with her friends.

"I am always amazed by other people's outfits, they are so much cooler than me and their clothes are very stylish," Sari said.

The gathering has been likened to a smaller version of Tokyo's famed Harajuku fashion district.

The movement has become so popular that copycat gatherings have spread elsewhere in Java -- Indonesia's most populous island -- in cities such as Semarang and Bandung.

And its viral fame has attracted attention from celebrities and influencers, as well as public officials including President Joko Widodo, who said young people should be able to express themselves creatively.

Local brands are now starting to take note and capitalise on the momentum by advertising their products and endorsing the "stars" of the movement, providing free clothes, shoes, and publicity.

"Teenagers are searching for their identity and they need recognition and validation. These teens saw that the quick and easy way to earn them is through likes and shares," Devie Rahmawati, a social affairs expert from the University of Indonesia told AFP.

"Marginalised teenagers used to resort to violence or illegal racing, now they choose fashion instead. This is a positive thing and I think it's beautiful."

For many, the booming street fashion scene has also become an affordable arena for fashionable experimentation, set against the backdrop of the city's most affluent district.

"To be a part of Citayam Fashion Week, you don't have to wear certain outfits or brands that empty your wallet," he said.