The artist Faan.Peeti finds redemption is in confronting past pain

Stepping into Room 248 in River City Bangkok, visitors will find themselves in a fantasy garden, which is actually the large bedroom of a girl, Yindee. Around the black and white garden, visitors will see Yindee's cute and extraordinary animal friends such as the isolated bat Louise, the three-headed serpent Samuel, the singing dove Whitney, and Tommy, the rabbit who competes in a race. The intriguing garden bedroom is the art exhibition "Yindee's Mysterious Friends" by Faan.Peeti.

Faan.Peeti is a pseudonym of the young artist and illustrator who created Yindee during the Covid-19 lockdown. Faan.Peeti said the pandemic made her feel down and reminded her of her bad memories of childhood.

"When I was young, I had only a few friends, so I liked to play and talk to my dolls about what I had been through. That made me feel better, so I decided to use the concept of imaginary friends in this exhibition. I want viewers to experience the exhibition together and feel that there are friends who can understand them," the artist said.

The concept of imaginary friends should make visitors feel warm and welcome, but when they read descriptions of the unusual animals in this garden bedroom as well as Yindee's diary, they find the exhibition to be dark and gloomy. 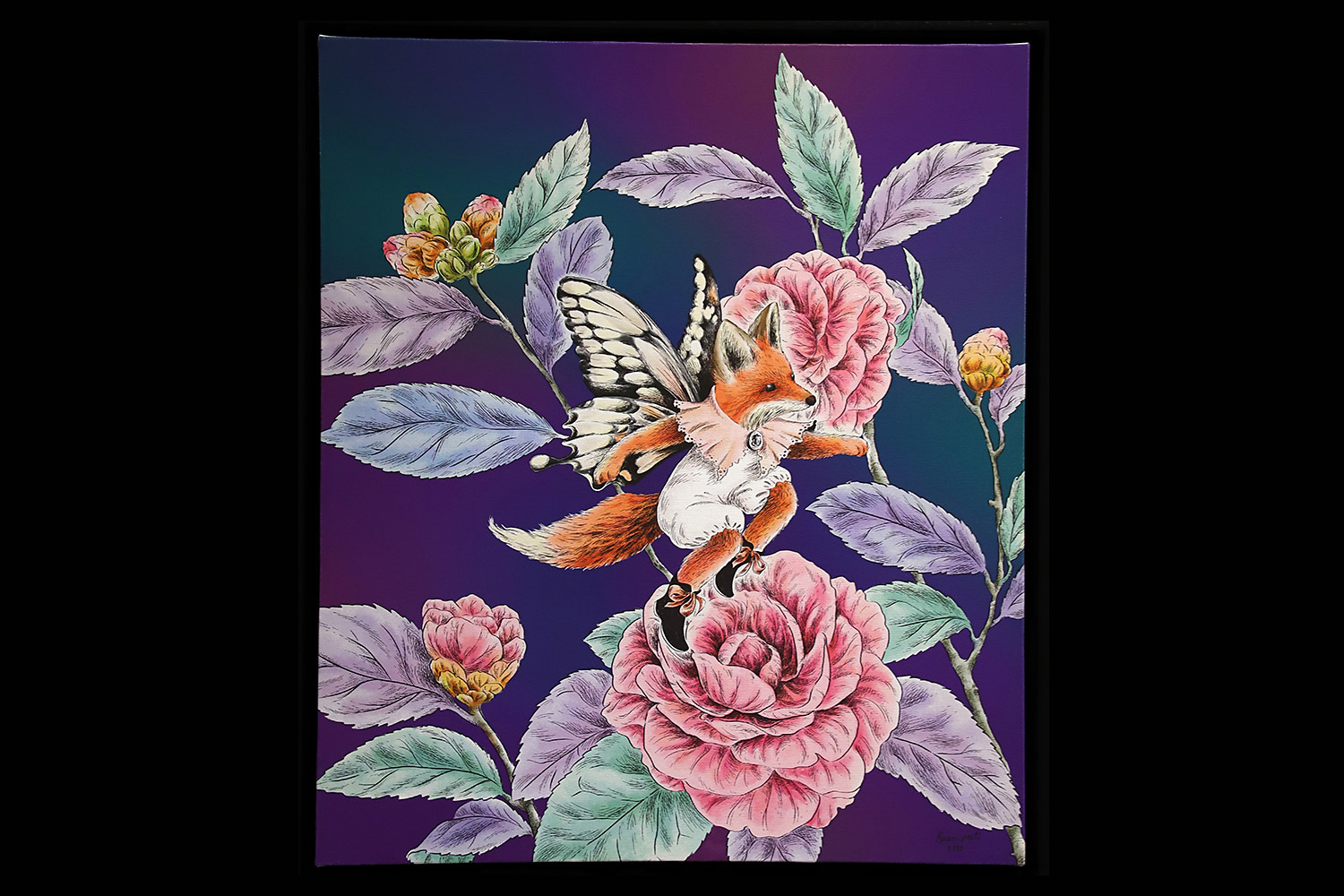 "The descriptions of animals and Yindee's diary were inspired by my own childhood pain as well as the pain of people I know. The exhibition looks bright and cute, but the content is in contrast to its vibe," said Faan.Peeti.

Yindee's diary narrates a story of her and her single mother. In the diary, Yindee writes that her mother is her world, but her mother does not treat her properly. Fortunately, she still has a diary as her friend.

Stories of the animals in the garden revolve around morbid themes. For example, sister cats, Eve and Emily, disagree about everything and are always fighting with each other. To make peace, they decide to stop speaking to each other. Their silence should make them happy, but inside their hearts are bleeding.

Louise, an unattractive bat, feels most comfortable in darkness. Louise feels warm when her buddy firefly, Paul, is around. However, Louise has to control herself to not eat her friend.

"The story of Eve and Emily is what many people would do when they have conflict. People prefer to avoid talking about issues they have and their problems are never solved. For Louise's story, I believe that people have their dark sides which they do not want to show others. Worried that their dark personality may harm their friends, they decide it is better to keep people at a distance even though they want company," Faan.Peeti explained. 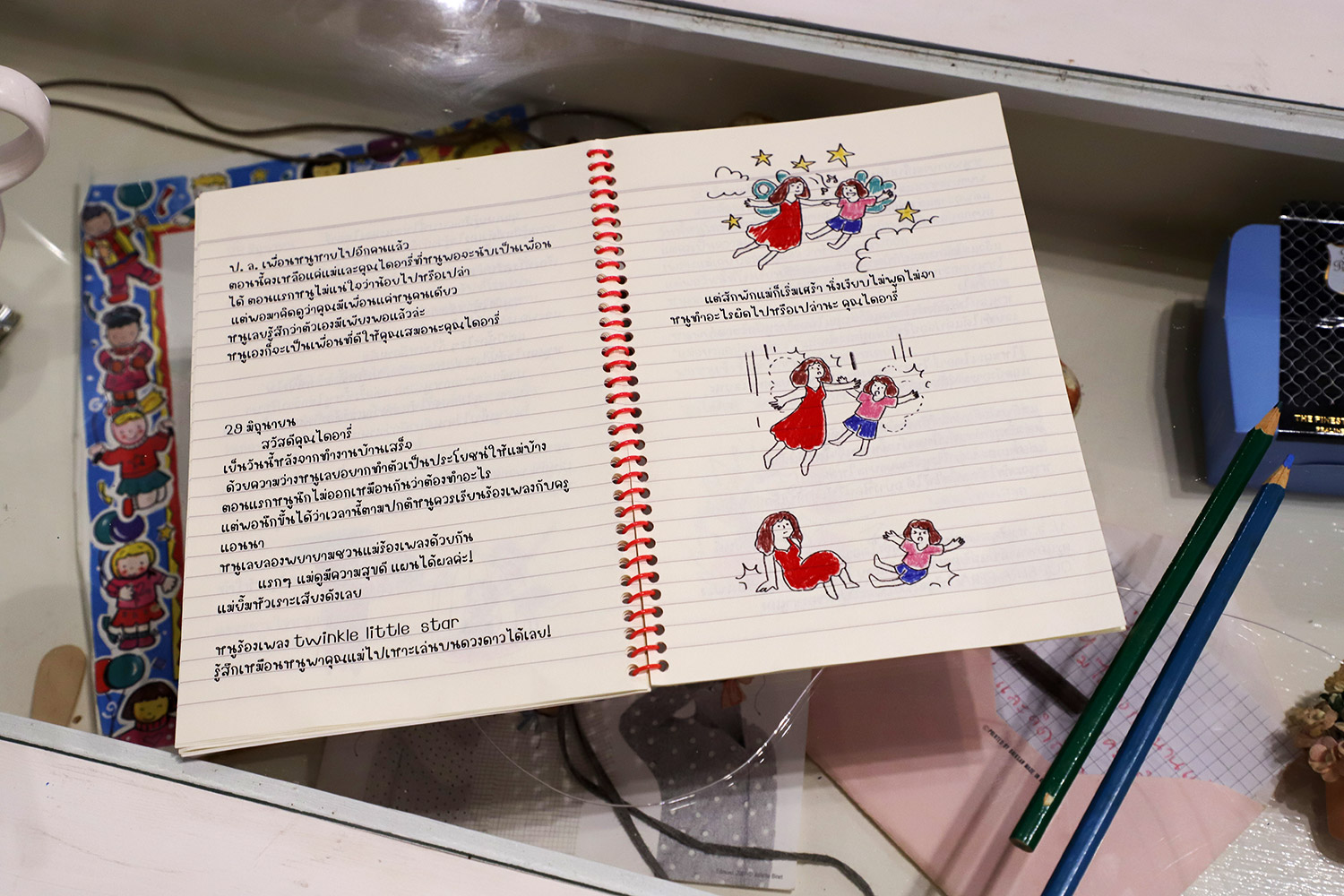 Yindee's diary narrates the story of her and her single mother.

The artist said the exhibition is a way to befriend monsters inside her.

"I cannot forget my dark side since it is a part of me. I cannot pretend that I do not see it, so I have to make peace with it," she added.

Faan.Peeti earned her bachelor's degree from the Faculty of Architecture, Chulalongkorn University, whose alumni include her favourite authors, such as Sarawut "Round Finger" Hengswad, Prapas Cholsaranon and Win Lyovarin. After graduating, Faan.Peeti became a writer at the well-known publication A Day. Then, she went to pursue her master's degree in illustration at Kingston University, London.

"I lost my grandma, which made me realise that nobody knows when we will die. I then quit my job as a writer because I wanted to draw," said Faan.Peeti.

At Kingston University, Faan.Peeti had opportunities to explore many techniques and used her creativity in several ways. The artist eventually discovered that she was particularly interested in the Victorian illustration style.

"I went to a vintage bookstore and saw an early edition of Alice's Adventures In Wonderland. Its black and white elaborate drawings were captivating. While browsing the book, I felt like entering another world, which was mesmerising. I also studied the history of the Victorian era and found that its culture and art were interesting. As a result, I kept drawing in a Victorian style," she said.

With her passion in Victorian art, Faan.Peeti was chosen by a lecturer to participate in an exhibition at the world's oldest surviving grand music hall, Wilton Music Hall. The lecturer told aspiring artists to study the archives of the theatre and interpret them into visuals. 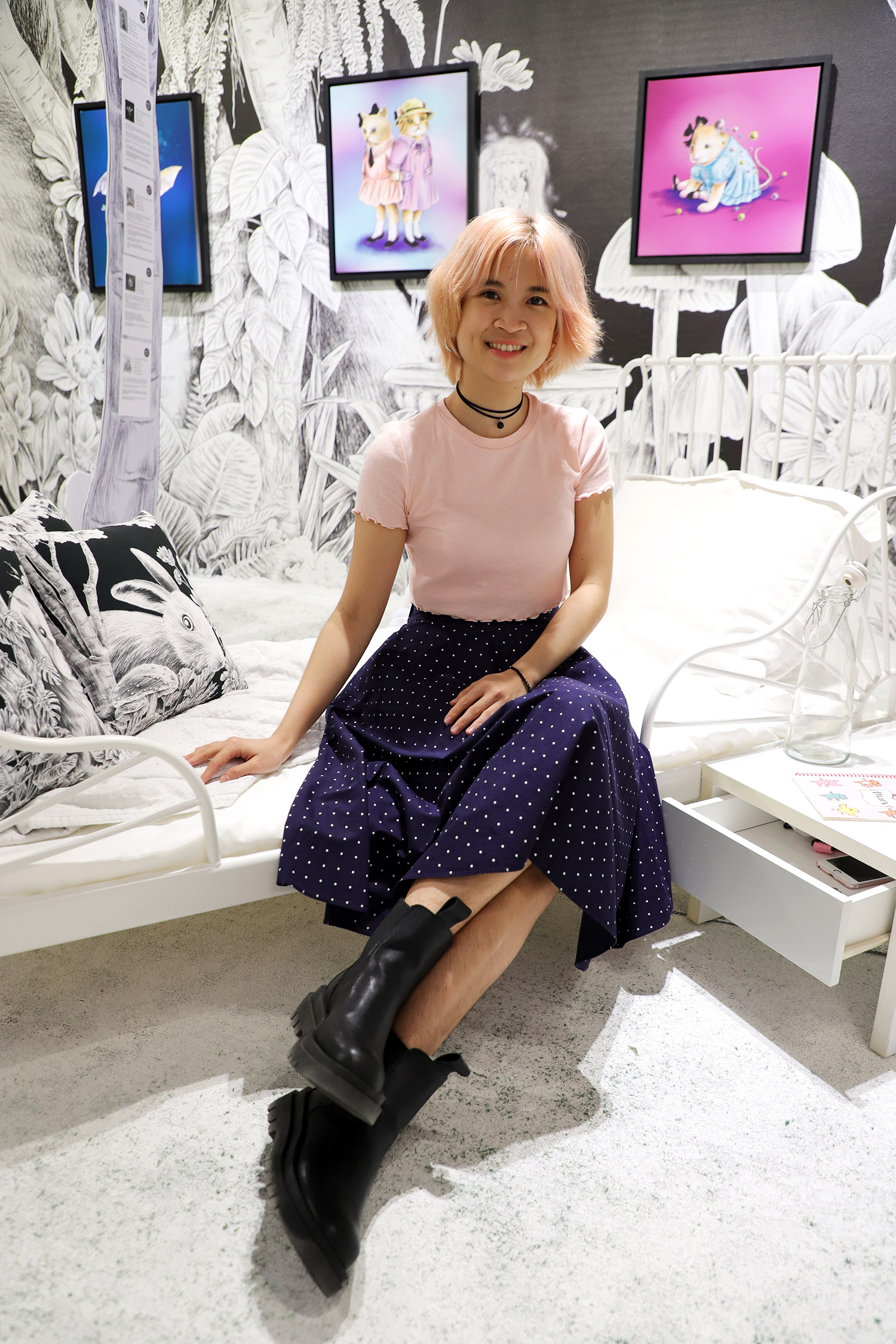 "I created a paper toy in the Victorian style. My toy resembles the Wilton Music Hall on a small scale where the performers and audience in the hall are mice wearing Victorian-style costumes. The exhibition was successful. Visitors liked my paper toy and complimented that it was cute. The best part was while I was working on this paper toy, I was happy every step of the way," Faan.Peeti said.

After graduation, Faan.Peeti returned to work with A Day as an illustration designer. Although she gained more experience as a professional illustrator, Faan.Peeti felt that something was missing.

Faan.Peeti became one of the winners in the postcard competition "Happening Makers 2019". The young artist fully expressed her own style through an illustration of a huge bouquet called Message From Flower, which can be separated into 10 individual images. This winning illustration was showcased at the trade fair "Pop Up Asia" in Taiwan and the Bangkok Illustration Fair 2021 where River City Bangkok discovered Faan.Peeti and gave her an opportunity to create her current exhibition.

"I wanted to be myself and decided to express my style liberally in Message From Flower. I felt honoured displaying my work at the Bangkok Illustration Fair. I also received advice from a famous illustrator and befriended many illustrators at the fair. The experience was like sailing into a vast ocean," she said.

Before the success of the exhibition "Yindee's Mysterious Friends", Faan.Peeti was worried whether or not she should express her childhood pain to the public.

"The exhibition is a journal where I record my past along with various lessons that I went through. I did my best to convey my deepest thoughts and most meaningful experiences. I felt so relieved since I could overcome my pain. Launching the exhibition felt like going up on stage to introduce myself, to greet people and make myself and my style known to the public. I want them to recognise this is what Faan.Peeti style is like," said Faan.Peeti.