Venice and the milk of dreams
Life
Arts & Entertainment

Santa Maria Della Salute, also known as Saint Mary of Health, stands majestically at Punta Della Dogana by the Grand Canal in the city of Venice. In 1631, Venice experienced an unusually devastating plague when nearly a third of the population was wiped out. As a votive offering, the Republic of Venice vowed to build and dedicate a church to Our Lady of Health with objects of art that bore reference to the Black Death. In March 2022, after postponement due to Covid-19 that killed thousands in the city, the 59th Venice Biennale opened under the theme of "The Milk Of Dreams" and was welcomed like a warm delicious latte by the art world.

Founded in 1895, the International Exhibition of Art, Venice Biennale has been described as the Olympics of the art world. Placed in the Giardini, pavilions were built to display art from various nations similar to International Expositions and World Fairs. Over the years, however, the format of national representation was criticised as outdated and obsolete due to emphasis on first-world nations, colonial past and institutional fixity. That led to a thematic format with the expansion of the Arsenale and the warehouses of industrial buildings as well as palazzos, churches and art spaces to accommodate countries and art projects. In this edition, 80 participating nations offer a variety of art that make Venice once again full of buzz and excitement.

Cecilia Alemani, the first Italian female artistic director, was inspired by the illustrated book The Milk Of Dreams by Leonora Carrington, a pioneering surrealist and feminist whose children's stories convey intense and unnerving scenes. Appropriately, milk as a symbol of purity is a nutrient-rich liquid food that relates to health, femininity and life. Spreading from Giardini to the Arsenale, Alemani selected over 200 artists with more females than males, many of whom are first-time Venice Biennale participants. In fact, emphasis on women artists became most evident with the Golden Lion Awards for Great Britain's Sonia Boyce and America's Simeone Leigh, both the first black women artists to represent their nations. The Golden Lions for Lifetime Achievement went to Chilean artist Cecilia Vicuna and German artist Katharina Fritsch.

In the Central Pavilion of the Biennale stands majestically a green elephant on a pedestal by Fritsch surrounded by reflective surfaces. Symbolically, the exotic creature related to faraway continents such as Africa and Asia is placed in relation to the dome painting Across The Time (1909) by Galileo Chini. Earlier in 1897 and 1907, King Chulalongkorn visited Venice Biennale and was impressed by Chini's Hall Of Dreams (1907). Although King Chulalongkorn did not see Across The Time, he was recommended to hire Chini by Carlo Allegri and Mario Tamagno, Italian architects who worked at the Ministry of Public Works in Bangkok. In 1910, Chini arrived in Bangkok after King Chulalongkorn's death and created majestic frescoes related to the Chakri Dynasty at the Ananta Samakhom Throne Hall.

Themes of dreams, fantasies and nightmares bombard viewers with mesmerising artworks by Paula Regno, Barbara Kruger, Leanor Fini and Niki de Sant Phalle. Andra Ursuta's Predators 'R Us (2020) with missing limbs and growing appendages is like a deformed goddess, both seductive and frightening.

In the section "Corpse Orbite, Technologies Of Enchantment And Seduction Of Cyborg", there are outstanding works by Simeon Leigh, Gabriele Chaile, Felipe Baeza, Delcy Morelos, Emma Talbot, Lu Yang, Tishan Hsu and Shuang Li. There are also stunning works such as To See The Earth Before The End Of The World by Precious Okoyomon; Offering Vessels and Breast Vessels by Pinaree Sanpitak; Tiger Strike Red by Sophia Al Maria; and Of Whales by Wu Tsang. 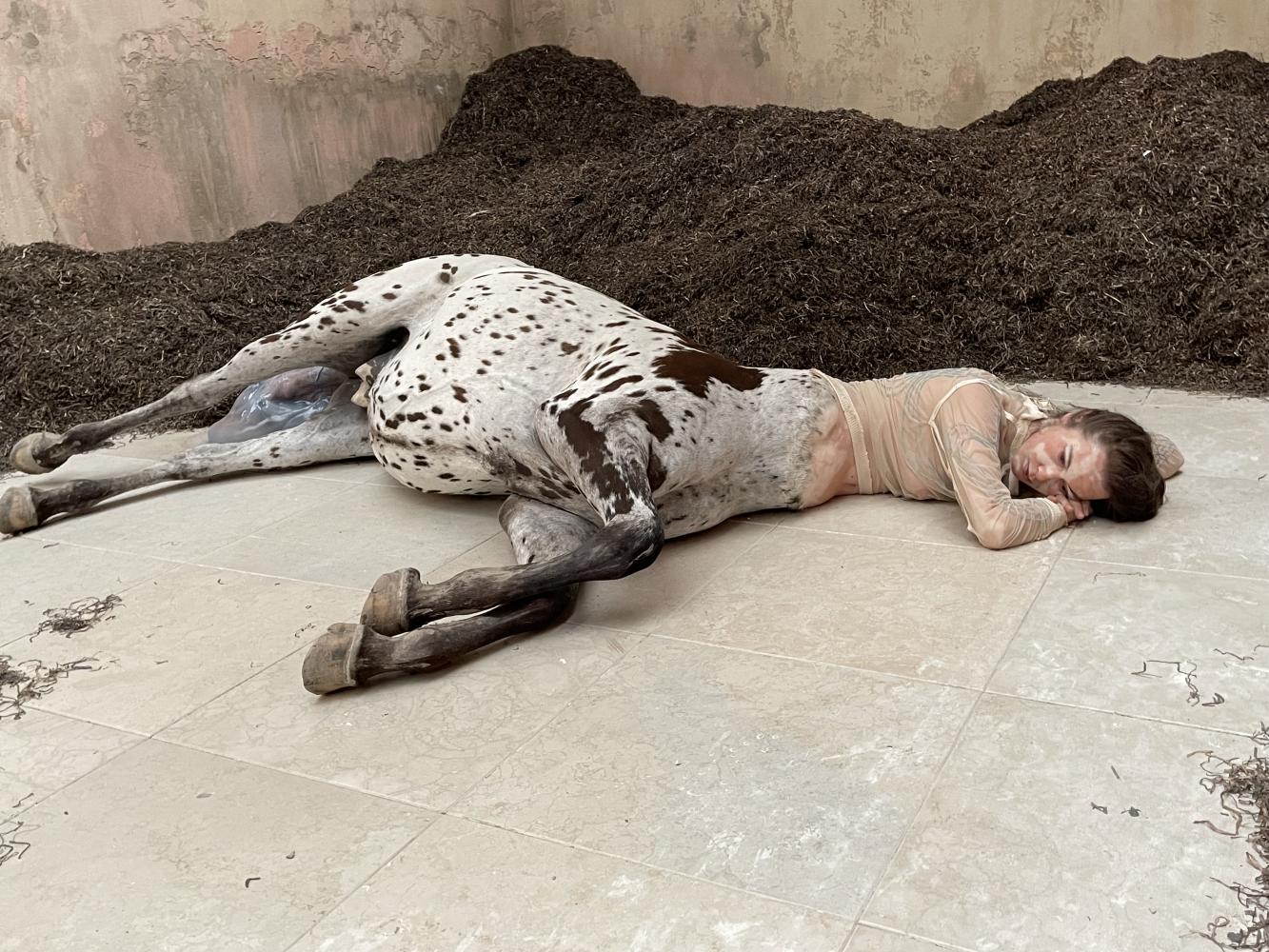 The national pavilions vary considerably in scale and quality. They are placed in the Giardini and spread out around Venice. Besides female artists representing Great Britain, the United States (Simeone Leigh), France (Zaneb Sedira) and Germany (Maria Eichorn), there are pavilions that received critical attention including Malta (Diplomazjia Astuta), New Zealand (Yuki Kihara), Canada (Stan Douglas), Denmark (Uffe Isolotto), Nordic Countries (Paulina Feodoroff, Maret Anne Sara, Andres Sunna), Nepal (Ang Tserin Sherpa), and the Republic of Korea (Yunchul Kim). In contrast, the Russian Pavilion remained closed as selected artists withdrew their work as a protest against their government's invasion of Ukraine. Piazza Ucraina is built tightly and covered with sandbags. It is a reference to wartime practice and is a space with posters and conversations about the urgent state of the Russian-Ukrainian war.

For Southeast Asia, the Philippines and Singapore represent their work along with the People's Republic of China, Mongolia, Hong Kong, Taiwan and the People's Republic of Bangladesh. Sadly, after a continuous presence since 2003, Thailand withdrew from the prestigious art world stage. Ironically, with the government's recent infatuation with soft power, the Minister of Culture Itthipol Khunploem meekly explained that there was no budget for a Thai Pavilion at the 59th Venice Biennale.

In fact, apart from financial issues, the problems of the Thailand Pavilion are more deep-rooted. The Office of Contemporary Art and Culture (OCAC), the Ministry of Culture responsible for the selection of Thai artists has received continuous complaints due to its lack of transparency in selection and preference for senior artists whose personal connections with the Ministry of Culture have been highly criticised. The previous selection for the Thai Pavilion in 2019 led to outcry and protest by artists. Still, the OCAC preferred their circle of friends, curators and dealers to represent Thailand in the café-restaurant Paradiso near the Giardini. The exhibition space itself is far from international standards. 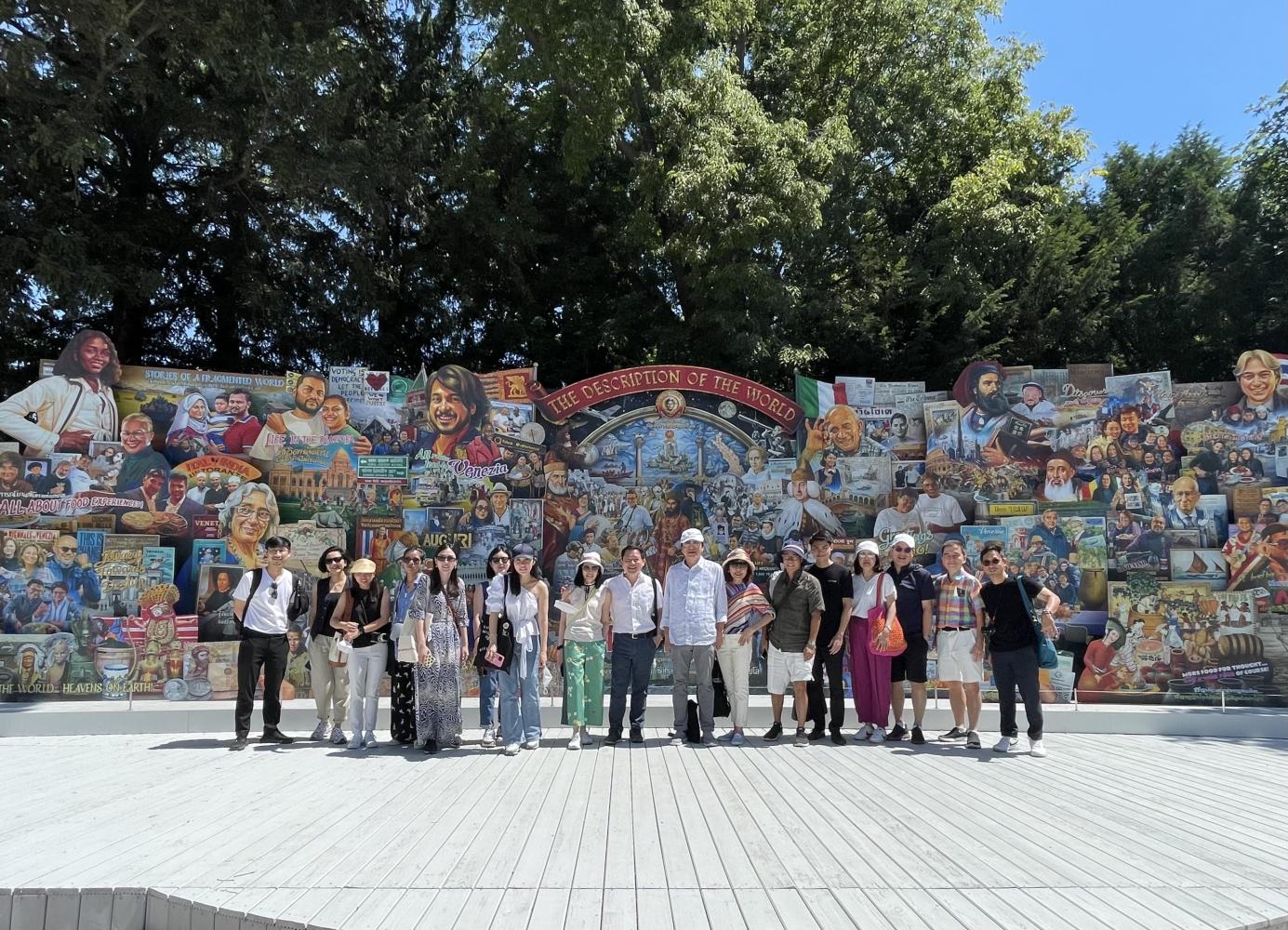 The Bangkok Art Biennale delegation in front of Navin Rawanchaikul's The Description Of The World, at the Swatch Pavilion. Apinan Poshyananda

Artists Pinaree Sanpitak and Navin Rawanchaikul who have been invited to the Venice Biennale prove plenty of individual Thai talents need no support from the Thai government. Pinaree's sumptuous red paintings of breasts and vessels and Navin's multi-layered paintings of the history of travel, trade and diaspora have been highly praised. The Songkhla Pavilion, initiated by artists who previously protested against the OCAC's selection for the Thai Pavilion, presented southern Thai culture with an emphasis on Nora traditional dance. Nora dancers performing on the gondola on the canal attracted plenty of attention from tourists and Thai residents in Venice and nearby towns who attended the event.

Besides official exhibitions and national pavilions, collateral events taking place all over Venice are extremely invigorating. To mention a few are exhibitions by Lucio Fontana, Antony Gormley, Ha Chong Hyun, Louise Nevelson and Chun Kwang Young. Anish Kapoor's monumental solo exhibitions at the Galleria dell'Accademia and Palazzo Manfrin comprise stunning works ranging from stainless steel objects to messy blood red installations and Vantablack sculptures. Kapoor who exhibited his crimson wax site-specific work at the Sermon Hall, Wat Pho, for the Bangkok Art Biennale 2020, said: "I feel a deep commitment to Venice, its architecture and its support for the contemporary arts." The Anish Kapoor Foundation acquired the 18th century Palazzo Manfrin which had been empty for several years. Anselm Kiefer's monumental works at the iconic Palazzo Ducale are inspired by the history of the floating city on fire and frozen. The series of works made of zinc, lead, gold, ash, clothing, shopping carts and ladders explores the themes of decay, memory and creation. They contrast vividly with paintings by Venetian masters Titian and Tintoretto in the Venetian palace.

The visual experience by contemporary masters like Kapoor and Kiefer reveal that dreams and fantasy are not all milk and feminine but can relate strongly to grimy red wax, masculinity and dark rot.

The 59th International Art Exhibition, Venice Biennale is on view until Nov 27. 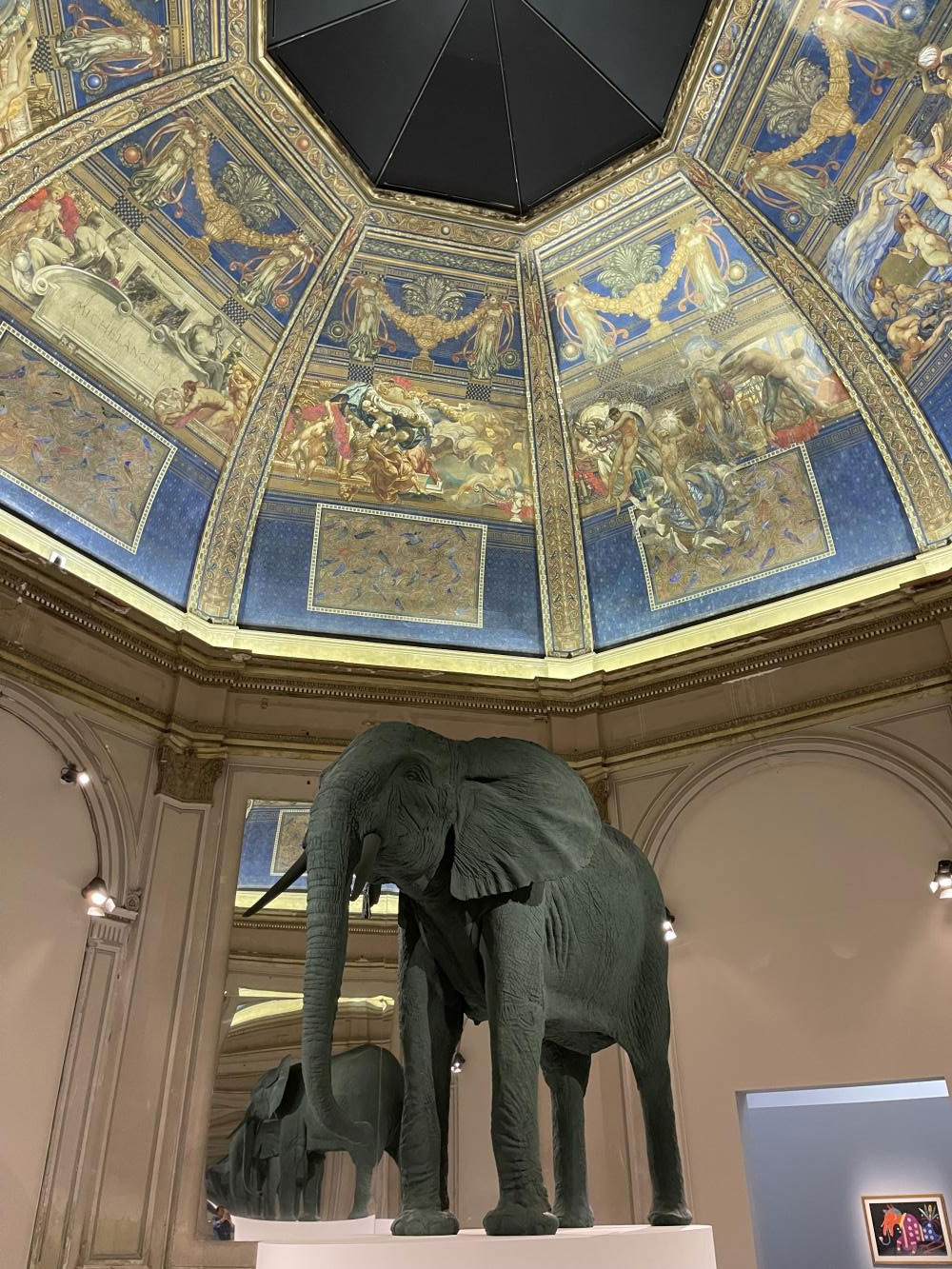 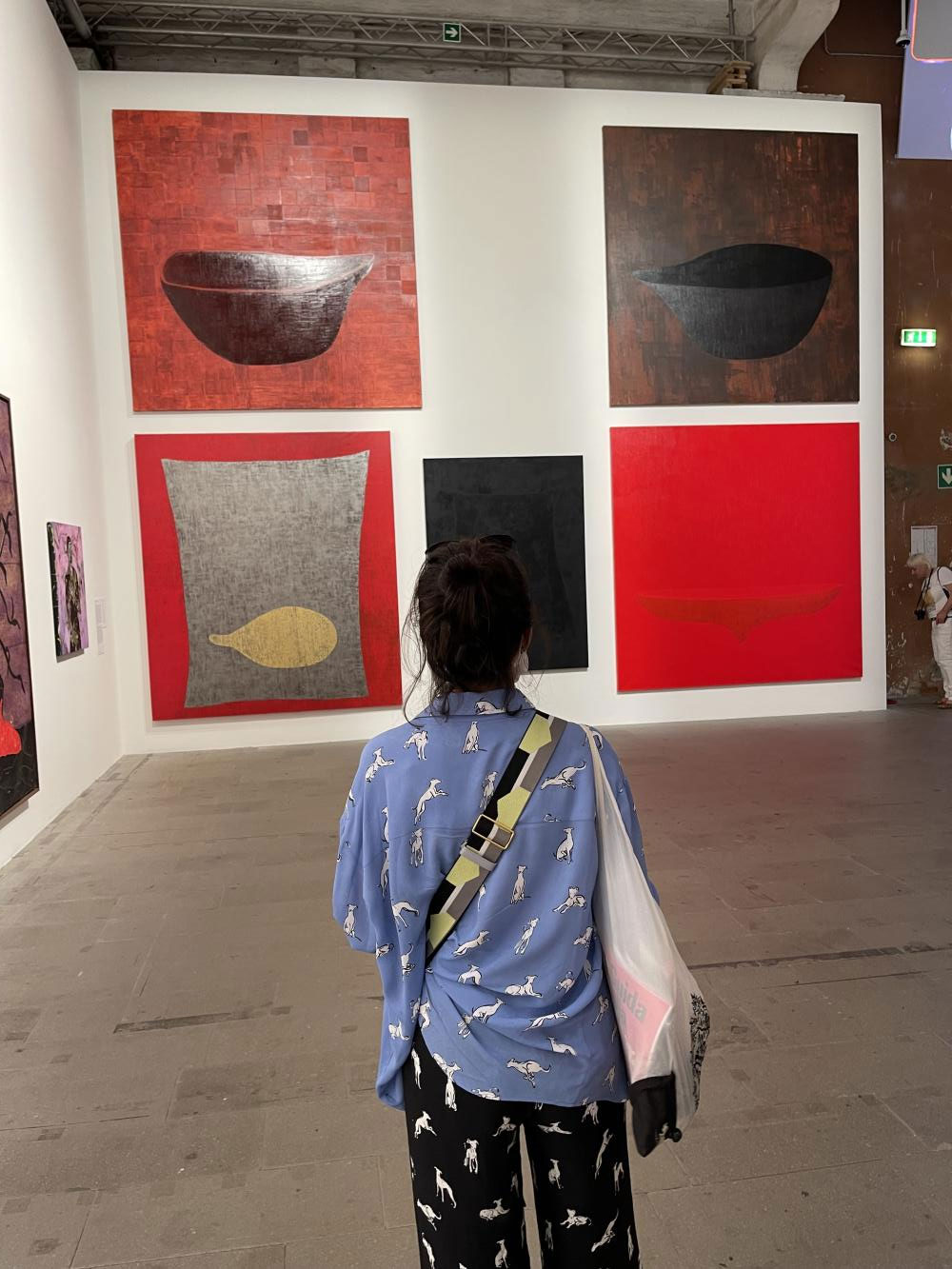 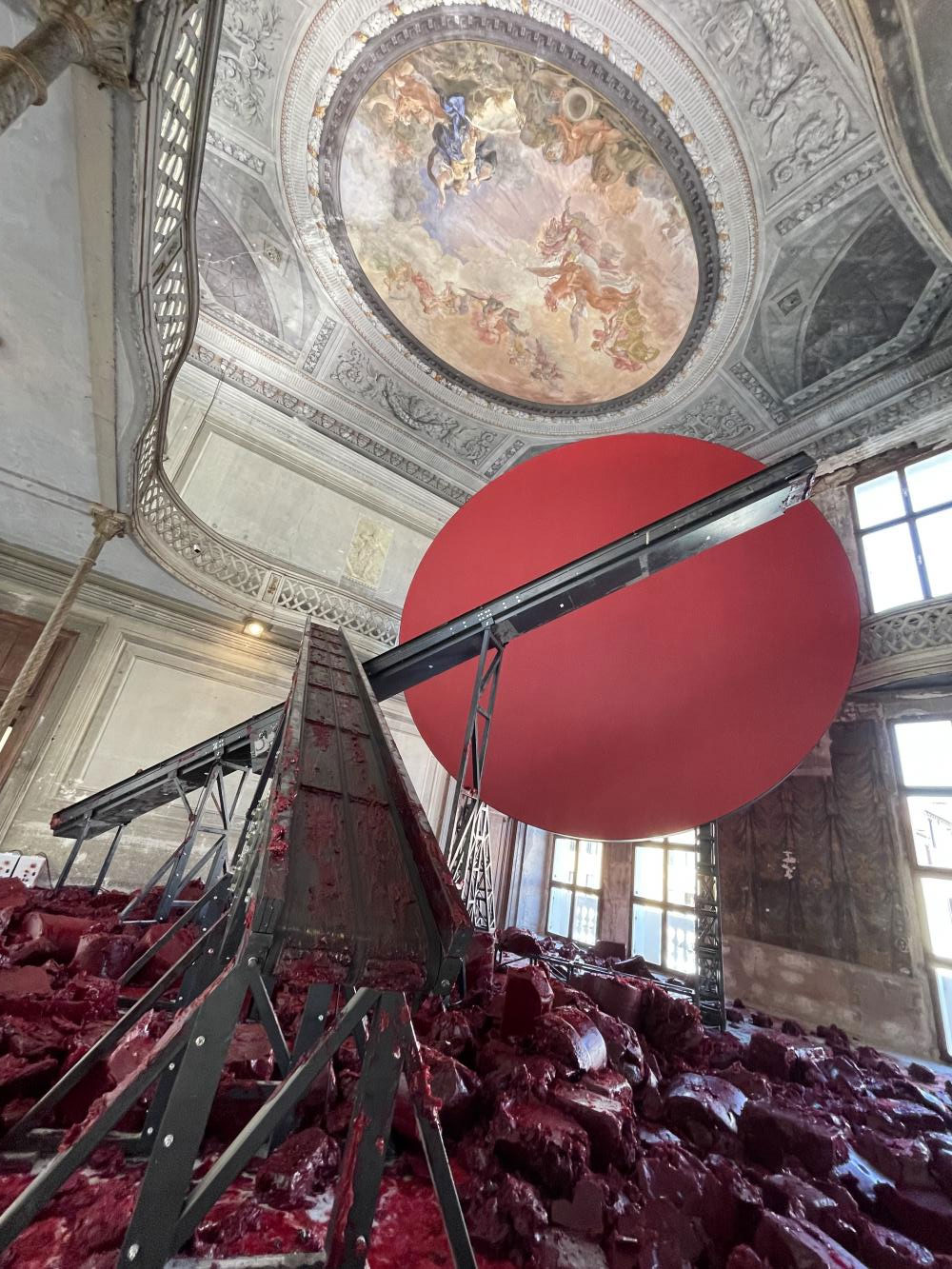 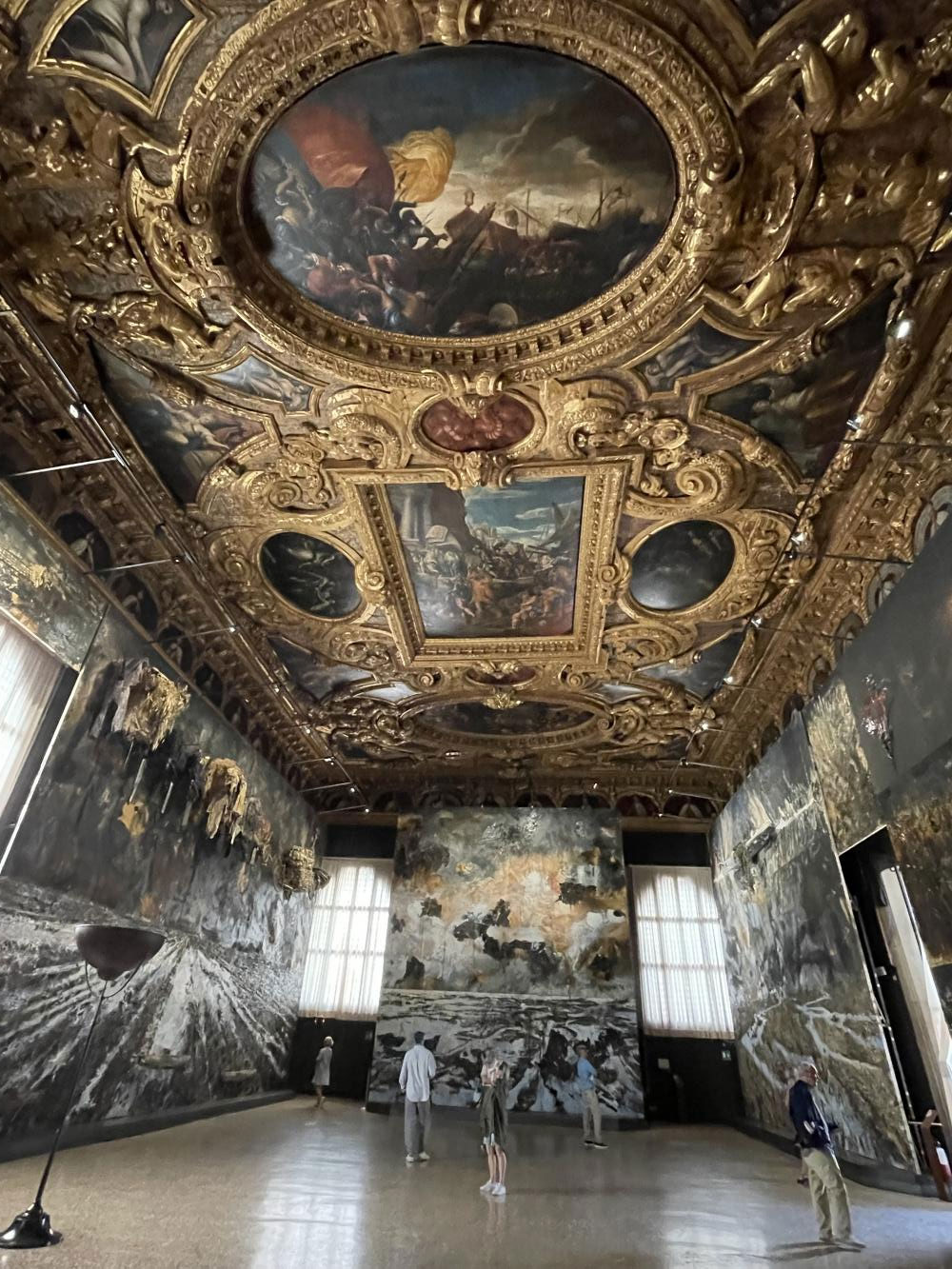 Anselm Kiefer's These Writings, When Burned, Will Cast A Little Light, at the Palazzo Ducale. Apinan Poshyananda