She "passed peacefully in her sleep" at her ranch in Tennessee Tuesday morning, her family said in a statement sent to AFP.

Lynn saw a number of her edgy tracks banned by country music stations, but over the course of more than six decades in the business, she became a standard-bearer of the genre and its most decorated female artist ever.

Born Loretta Webb on April 14, 1932 in small-town Kentucky, Lynn was the eldest daughter in an impoverished family of eight kids, a childhood she immortalised in her iconic track "Coal Miner's Daughter" -- a staple on lists of all-time best songs.

"We were poor but we had love / That's the one thing that daddy made sure of," Lynn sang in the hit recorded in 1970 -- later the theme song for a 1980 movie about her life starring Sissy Spacek, who won an Oscar for the role.

At just 15 years old, the artist married Oliver Vanetta Lynn, who she remained married to for nearly 50 years until his death in 1996.

They moved to a logging community in Washington state, and Lynn gave birth to four children before the age of 20, adding twins to the family not long after.

An admirer of his wife's voice, her husband bought Lynn a guitar in the early 1950s.

The self-taught musician went on to pen lyrics inspired by her own early experiences as a married woman and her oft-tumultuous relationship, the nascent days of a prolific career that would see the artist release dozens of albums.

She started her own band, Loretta and the Trailblazers, and began playing bar sets before cutting her first record -- "I'm a Honky Tonk Girl" in 1960.

Her twang was warm and languid but Lynn's lyrics were anything but: She sang with searing precision of marriage's growing pains and gave voice to issues facing women that had long been kept quiet.

"Most songwriters tended to write about falling in love, breaking up and being alone, things like that," Lynn told The Wall Street Journal in 2016. "The female view I wrote about was new."

"I just wrote about what I knew, and what I knew usually involved something that somebody did to me."

The Lynns began touring nationwide to promote the singer's work to radio stations, and she made her debut at the storied Grand Ole Opry in 1960, going on to become one of the Nashville institution's most acclaimed acts.

"Our Opry family turns to music when words fail. Thank you for all you've given to the Opry, @LorettaLynn," the show tweeted.

During her early years in the industry, she found a friend and mentor in Patsy Cline, one of the 20th century's most influential singers who died in a plane crash in 1963 at age 30.

She also forged a longstanding creative partnership with Conway Twitty, with whom she formed one of country's classic duet acts.

Lynn released a steady stream of hit singles, including 1966's "Dear Uncle Sam" -- one of the era's first tracks to document the tragedy of the Vietnam War.

That same year she put out "You Ain't Woman Enough (To Take My Man)," which made her the first woman in country to pen a number one hit.

In 1969, she released one of her most controversial songs, "Wings Upon Your Horns," which describes through religious metaphor a teenager losing her virginity.

But her runaway success continued and she dominated the 1970s with hits such as "Fist City" -- a stern warning to her cheating husband's lover -- and 1972's "Rated X," which triggered an outcry in discussing the stigmas faced by divorced women.

In 1975, she released "The Pill," which praised the freedoms of birth control.

"But everything I sang about was everyday living."

In 1988, Lynn was inducted into the Country Music Hall of Fame as one of its most storied legends.

She won virtually every arts honor available, including the prestigious Presidential Medal of Freedom, the nation's highest civilian award.

Despite the progressive airs of her music, Lynn would insist that her clearly political music had "no politics." She leaned Republican most of her life, frequently performing for and supporting right-wing candidates -- including Donald Trump in 2016 -- even as she also voiced support for Democrats like Jimmy Carter.

But she was universally beloved in the industry she deeply influenced, collaborating with scores of artists including Dolly Parton, Willie Nelson and Elvis Costello. In 2004 she released the album "Van Lear Rose," produced by Jack White.

In 2021, a month before turning 89, she released the album "Still Woman Enough," which featured re-recordings and new material.

"We've been like sisters all the years we've been in Nashville and she was a wonderful human being, wonderful talent, had millions of fans and I'm one of them," wrote the superstar Parton.

Crystal Gayle, Lynn's actual sister and a singer in her own right, wrote that "the world lost a legend. We lost a sister. Love you Loretta."

Lynn once told Billboard she'd never retire from music, vowing that "when they lay me down six feet under, they can say, 'Loretta's quit singing.' I'll have on one of my gowns," she continued. 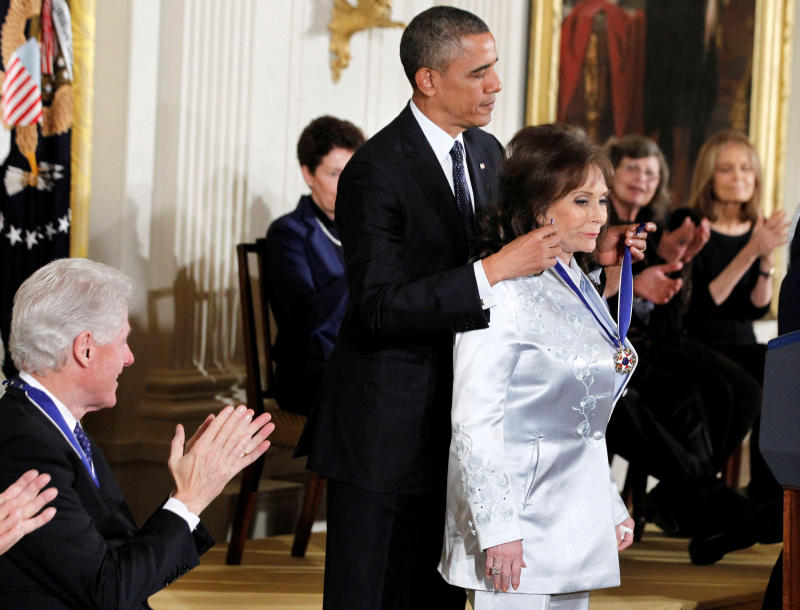 United States President Barack Obama presents the Presidential Medal of Freedom to singer Loretta Lynn at a ceremony in the East Room of the White House in Washington, on Nov 20, 2013. (Photo: Reuters)