Parents are appealing to police to crack down on a marauding teenage gang in Rat Burana after they fired a shotgun into their shop. 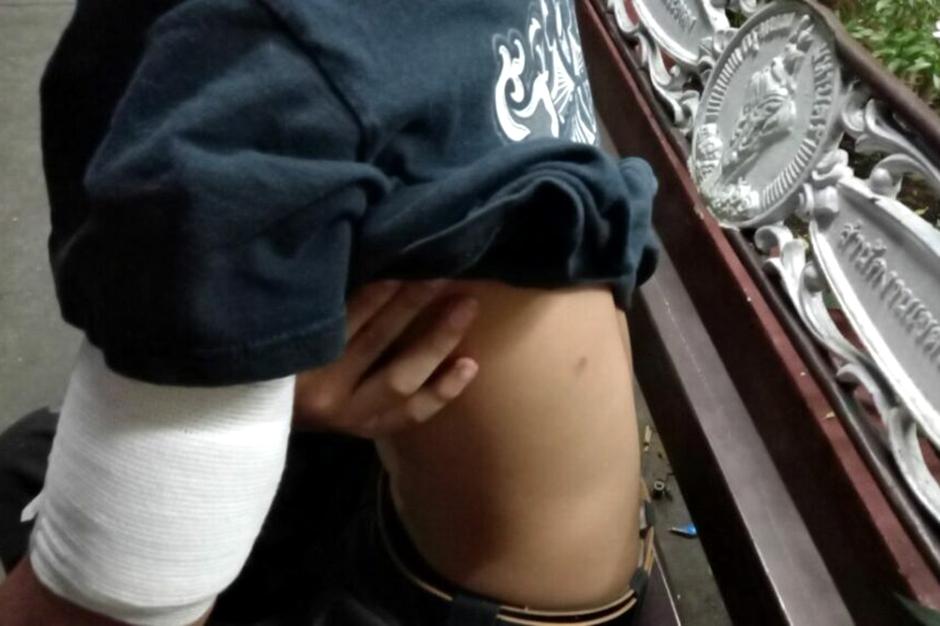 Nok, with his injuries.

Yoskrai, 49, owner of a car repair shop in soi Pracha Uthit 33, sub-soi 25, Bang Mot, Thung Khru, says a gang of vocational students is cruising around the area looking for youngsters they can harass.

A group of teens including his son has been gathering at his shop every day during the term break to play computer games. They sit and play with the teens who work at the car yard. He doesn't mind them gathering there, as he can keep an eye on them. However, it also makes them a target for mischief.

"The gang cruises around looking for enemies and chases them with iron bars and knives. They also hurl ping pong bombs and rocks. Now they are taking random shots inside my shop," he said.

He and his wife complained to Rat Buruna police, who blamed them for letting the teens gather at his car yard.

On Oct 22, two lads on a motorcycle went past his place about 7pm, saw his son and his mates gathered there, and shot at random into the yard with a Thai-modified shotgun.

One lad, Nok, a 14-year-old friend of his son's, was injured, with five pellets grazing his arms and back. While the teen attackers are aged about 20, his son and his mates are just 14–15.

Yoskrai said the gang has been launching almost daily attacks since the term break started a month ago. He is worried that next time, an attack could be fatal.

"They get around with full-face helmets, and look like vocational students. When they see another bunch who look the same they start attacking them.

"Their ping pong bombs are home-made and contain rocks. I have complained to the police once before but they did not bother getting in touch with the culprits. They asked my son and his mates to leave a record of what happened, and that was it," he told reporters.

Nok, 14, the shooting victim, said he was standing in the yard when two lads went past on a motorcycle, saw him there, and doubled back.

"They shouted at us and shot at random in the yard. I fled and when I discovered later that I had been shot, I told my mate [Yoskrai's son], who alerted police and took me to hospital," he said.

The owner's wife, Orachorn, 41, said she had been hit in the leg by ping pong bombs hurled into the shop.

After the latest attack, Yoskrai again complained to Rat Burana police, who told him dismissively the attacks happen because he lets teens gather at his yard.

"They said I shouldn't let the kids form groups as it is just asking for trouble. I don't know what to make of such comments," he said.

The shooter, he said, later posted a picture on Facebook of himself with a gun, intimidating his son and his friends further.

"Nok's family went to see the offender's parents. His mother admitted it was her son and the two agreed to meet at the police station but the mother failed to show up," he said.

On Oct 15, shortly before the incident, about 10 teens had come to his yard to pay respects for his birthday. "That night, the teens tossed a ping pong bomb, and injured my right foot. Some of the kids were hit by shrapnel in the face," he said.

In another incident, a 16-year-old friend of his son's was stabbed in the back as he was waiting at the lights on his way to a football game. A fight ensued between the victim, his mates and the attackers.

Contacted by reporters, the victim's mother said the offender's parents had asked her not to take it further, as their son was injured too.

"I agreed not to go to the police, and told my son to stay at home. I have only just found out the lad with the knife has rejoined the gang and is harassing teens again," she said.

"The injuries resemble bruising more than gunshot wounds, so we are not sure if a gun was actually involved," he said. "However, the victim was sent to hospital for a checkup, and we will go after the offenders when we have gathered evidence," he said.

One media report said the shooter had handed himself in to Thung Khru police, but was told to report to Rat Buruna police instead, as it's their jurisdiction. The case continues. 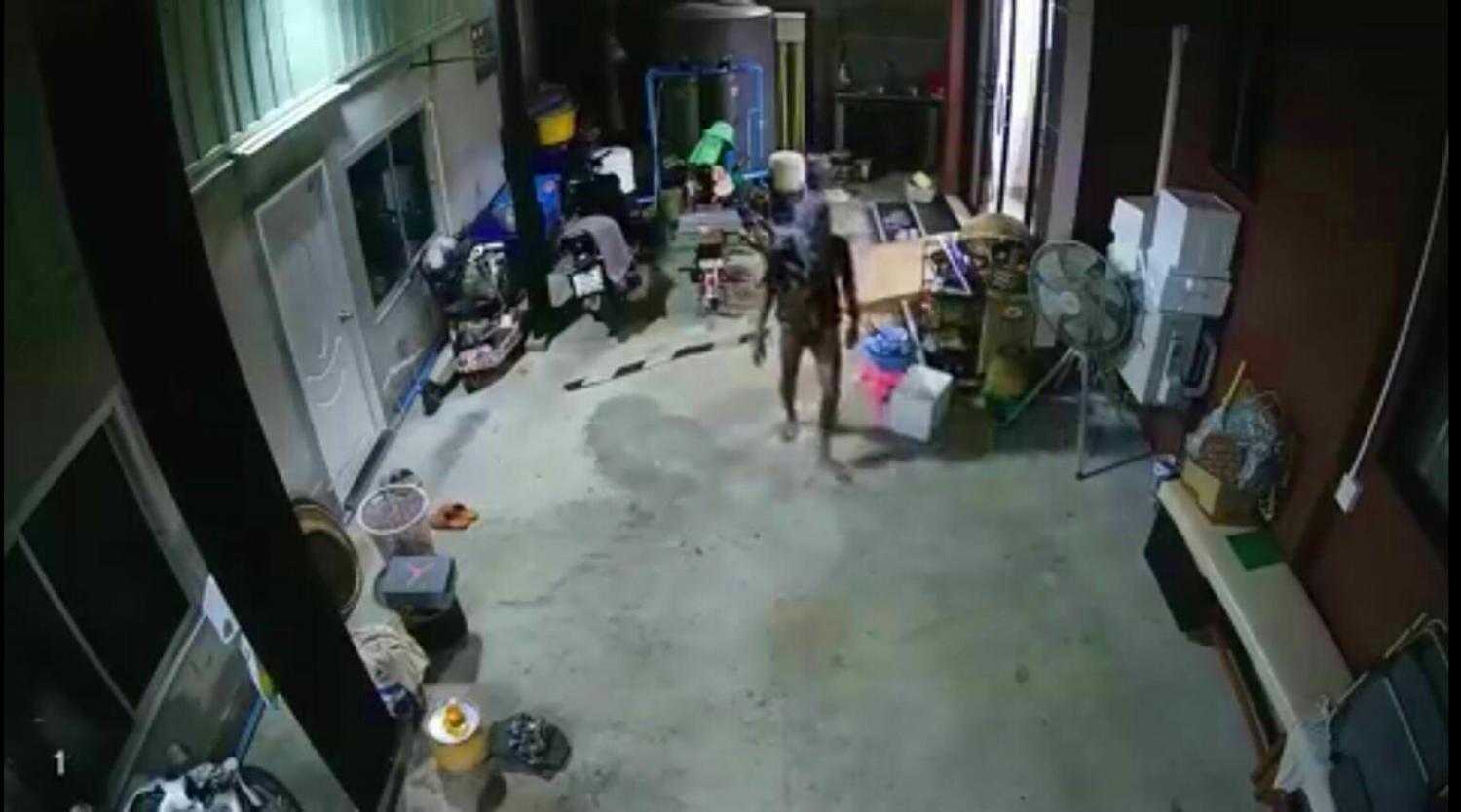 Police in Si Sa Ket are looking for a semi-naked man who robbed eight houses in one night and did not seem the least embarrassed to be caught on CCTV wearing nothing below the waist.

Locals in Huai Thap Than district say the man made off with almost 10,000 baht in cash from one house alone, but seems to have struck out at the others as the occupants realised they had an intruder in their midst.

Puangphet Somsiri, 50, said she was asleep early on Oct 21 when she heard someone searching a desk drawer in the next room. "When I heard the sound of someone undoing the zip of my money bag I called out. This startled the intruder, who fled," she told reporters.

CCTV vision shows her chasing the man, wearing a balaclava and a black T-shirt. He escapes out the back.

When she inspected the CCTV vision later she discovered he was naked below the waist, which does not appear to have posed a hindrance to his house-breaking efforts, in part because some homeowners obligingly left their doors unlocked.

"I talked to the neighbours and discovered he had let himself into eight places and made off with almost 10,000 baht in cash, though he left his victim's phones and other valuables. I suspect he turned up naked because he wanted to have his way with any women he found," she said.

Natchanon Potnadee, 43, said she heard her daughter, 12, calling out about 1am that an intruder was in the house.

"My daughter said the intruder grabbed her arm, but she ran from the room and alerted me," she said. He had let himself in through the back door, which was unlocked.

Later that morning, Piengjai Sathan, 58, said she was about to pay for some goods when she opened her purse and found her money was gone.

"My keys were there along with my two phones but more than 7,000 baht in cash had gone. My husband checked his wallet and found 2,000 baht was missing. I had put my purse on a desk at home," she said.

"Later I heard locals saying a half-naked guy had been breaking into their places. My back door wasn't locked, so I suspect he let himself in that way," she said. Police are investigating. 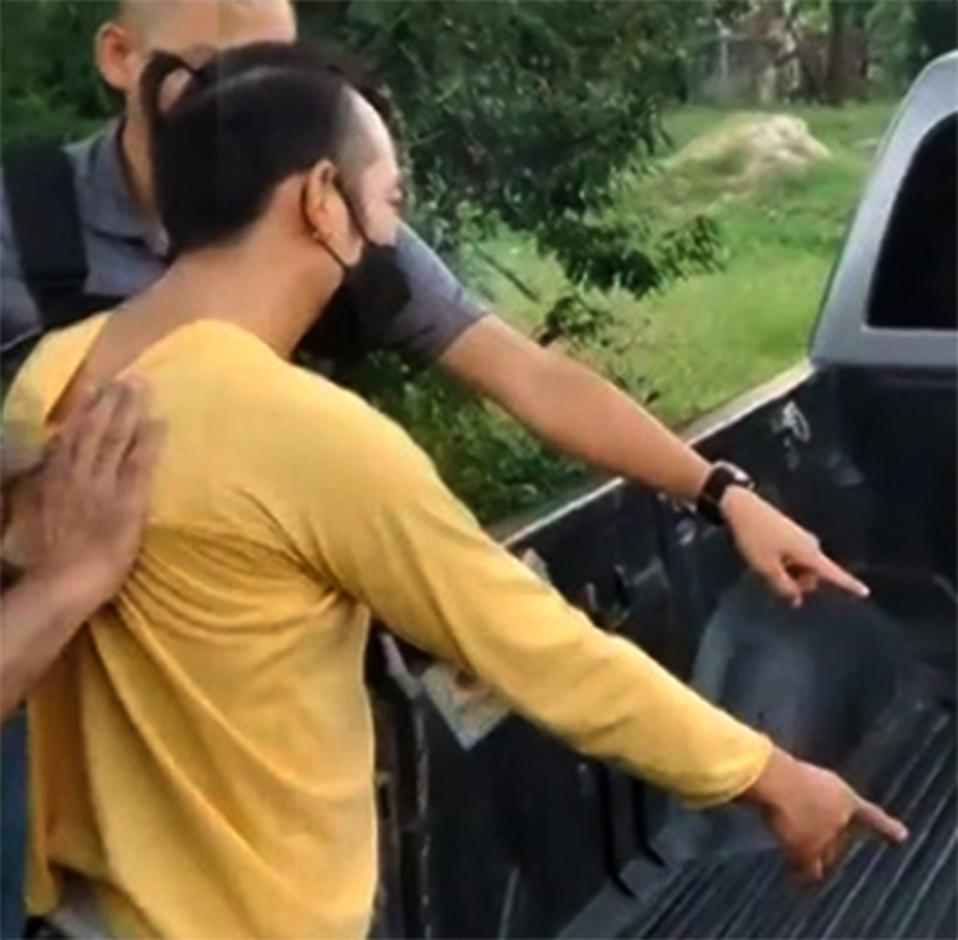 The art of delegation

A Suphan Buri trader known for his rice porridge shop has expanded into the drugs trade and now gets his wife to run the shop for him.

Police last week nabbed Chaiyapruek "Bell Sam Chuk" Suthiwaradom, 36, who gets the Sam Chuk part of his nickname from Sam Chuk district market in the province's north where his rice porridge has a good reputation.

Officers learned about his drug sideline from an addict they nabbed, after locals complained that drugs were rife in the area.

The addict identified him as his supplier and agreed to place another order as police lay in wait near a water pumping station. Bell Sam Chuk turned up on his motorcycle, and slung a bag of 808 speed pills into the back of a waiting pickup as agreed.

Police and district crime protection officers pounced, and as they were counting the merchandise remarked that the tally came to 808 pills.

Bell Sam Chuk, who said he takes 10 or more speed pills a day to feed his own drugs habit, jokingly asked police if they'd let him take the eight pills, to round the total down to a tidy 800 and also alleviate his potential punishment.

While once well known for his rice porridge, he said he has now given that up and gets his wife to run the shop instead. Bell Sam Chuk said he spends his days taking drugs at home and arranging drug deals.

His own supplier, he said, is a major dealer in the market who sells him the pills for 10 baht a piece. Bell Sam Chuk adds a five baht mark-up before selling them to his own customers.

"I was first caught for drugs 15 years ago and served jail time, and caught another two times last year, after which I asked my wife to run the shop for me," he said.

Unclear is what sentence he served for the two drug busts last year, but they appear not to have deterred him in any event.

In another strange twist to the case, reporters noticed that when police put the seized drugs on display at a media briefing, an accompanying sign said there were only 800 pills, not the original 808 he was found with. They wondered if police let him take the other eight pills as he cheekily suggested, or perhaps otherwise disposed of them. As of press time, the mystery had yet to be solved.