A meeting of past and present
Life
Arts & Entertainment

A meeting of past and present

For his solo exhibition 'Me And Them', Tawatchai Somkong puts his own spin on old sepia paintings

published : 24 Jan 2023 at 04:02
newspaper section: Life
writer: Thana Boonlert
Inside ‘Me And Them’ by Tawatchai Somkong.

As time goes by, the past fades into oblivion. Like other artists, Tawatchai Somkong combs through piles of dusty history and finds something invaluable. He often visits antique shops when travelling abroad. Century-old sepia paintings are used for lavish adornment, and some are high-quality for museum display. In 2014, he began to create a collection of works that personally resonated with him.

"I wanted to bring them back to the world of contemporary art," he said of his solo endeavour that concluded at the Matdot Art Centre last week. It was titled "Me And Them" in English or "Tawiphob" in Thai, a nod to a famous novel by Tomyantee. A playful punch was signalled by how the artist spelt the word phob in Thai differently to convey an intended meaning -- an encounter between the past and the present.

"It is a collaboration based on respect for original artists. I have retained their characteristics as much as possible. At the same time, I put myself into their works to show how the contemporary thinks," he explained. 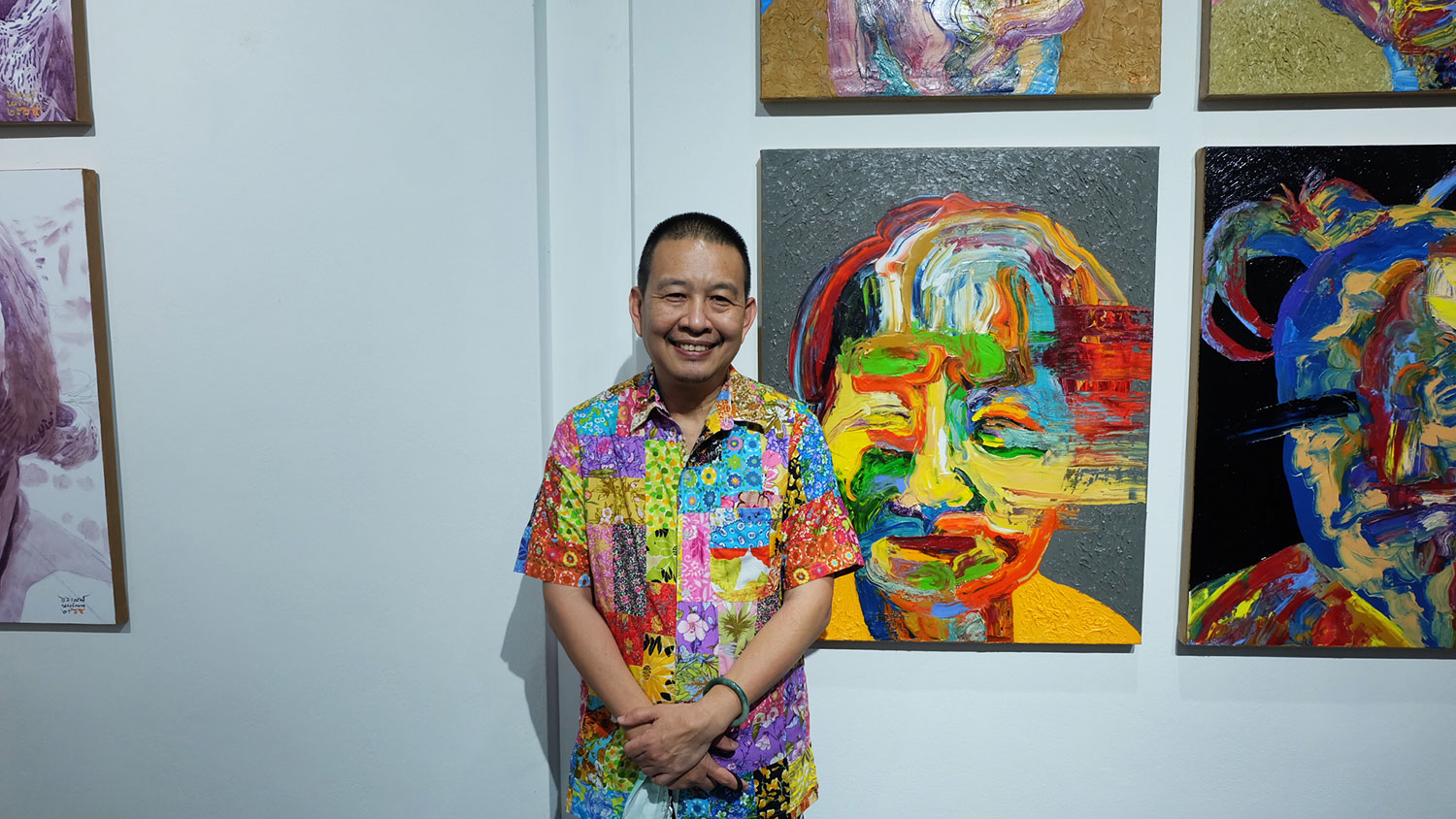 Alongkorn Lauwatthana with paintings of his late mother.

These works were reproductions by artists who learned by copying their teachers. But he partially painted fluorescent colours over them, something unimaginable at the time of creation. In those days, artists worked under the command of patrons. It was not until the Industrial Revolution that they were released from such bonds because mass production increased their access to cheaper art tools. Besides, the definition of art changes quickly.

On view were a handful of religious artworks such as The Red Cross and One Last Touch, in which Tawatchai painted the cross and some unnecessary disciples red to foreground their message. Nearby, Romeo & Juliet was a rework of a very murky painting of William Shakespeare's tragic play. In the same way, he applied red colour to the tree, the poison and the cupid to contrast them with the surrounding environment.

"By interacting with artists from different generations, I think techniques and colour palettes have evolved a lot. Period works are characterised by sepia. Almost monotone. I have broken the mould by using graffiti colour to signify the contemporary era or adding some elements to tease them," he said. No More Lonely Night is a parody of a woman who is apparently waiting for someone, but Tawatchai gave her a chair and a cloud that looks like an eye so that she rests. A Dog, Fisherman And Artist was an adaptation of an untitled work by T.S. Benson. Tawatchai created his own avatar and a Thai ridgeback dog for a lonely fisherman in the original oil canvas. Besides bold imagination, the job requires skill because a mistake is irreversible.

It should be noted that Tawatchai included the eye-shaped cloud in these reproductions, such as The Surveiling Eye In The Garden and The Wandering Eye, to represent change. 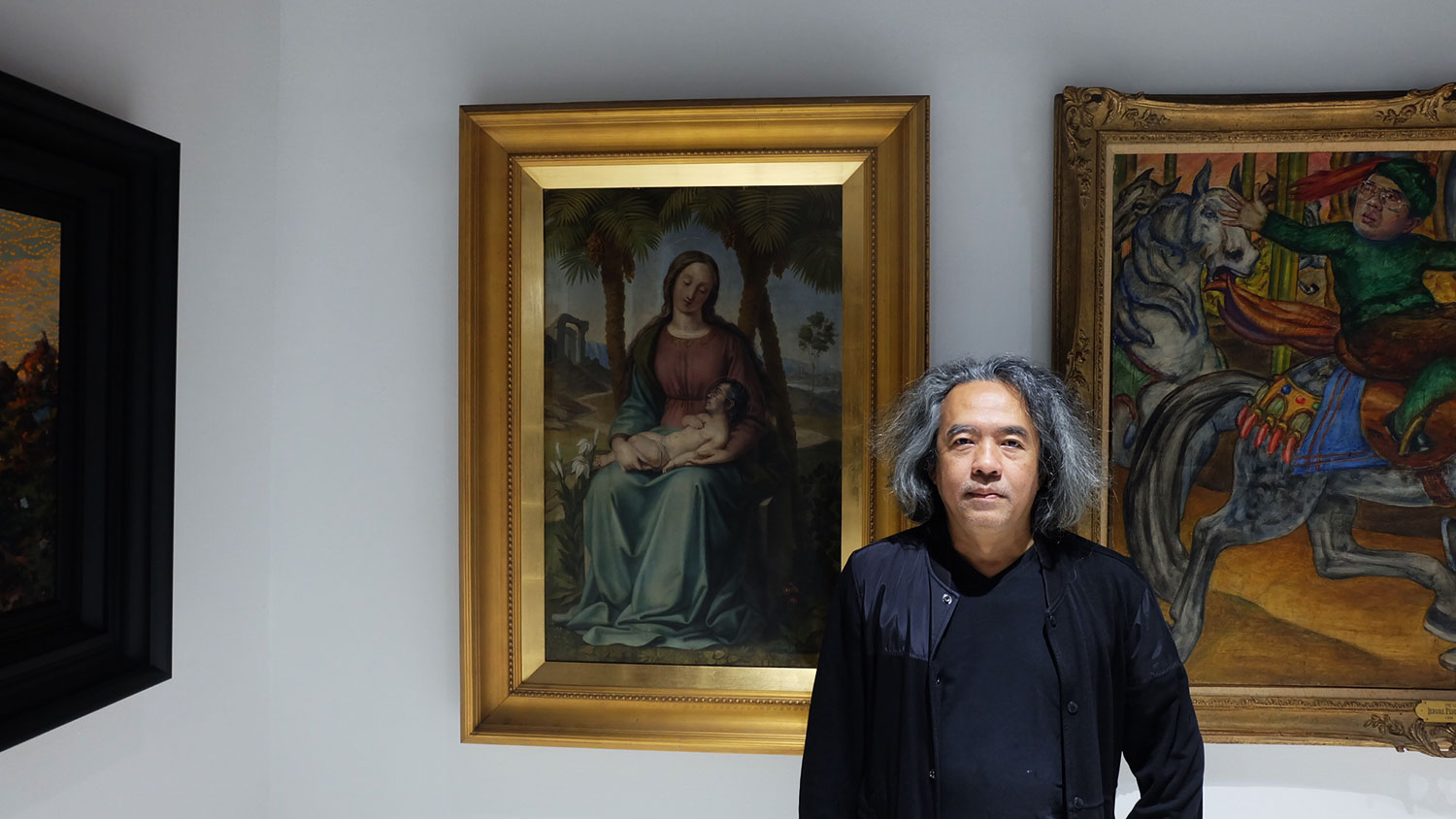 Tawatchai with Everybody Is Someone’s God, left.

"I have been fascinated with clouds. They are shape-shifting and indicative of a change in weather," he said. "It shows that areas in these paintings no longer exist due to urbanisation. Conceptual art allows me to explore, critique, or make original works complete."

His art rescue operation entailed challenging the Western dominance of art history. In Everybody Is Someone's God, he painted his own face over the newborn Jesus sleeping on his mother's lap to show that the child can be of other races, making the notion of love more universal.

"It is my favourite piece because mothers are like our gods. I am a Buddhist but embrace every religion. I just make an interpretation in my own way," he said.

His project ran in parallel with his friend's solo exhibition titled "Mother". Alongkorn Lauwatthana reconstructed his late mother through a collection of 28 portrait paintings. He kept her photos in various postures to capture her smile three years ago when she was still in good health. In 2022, she fell ill for six months and passed away later aged 93. 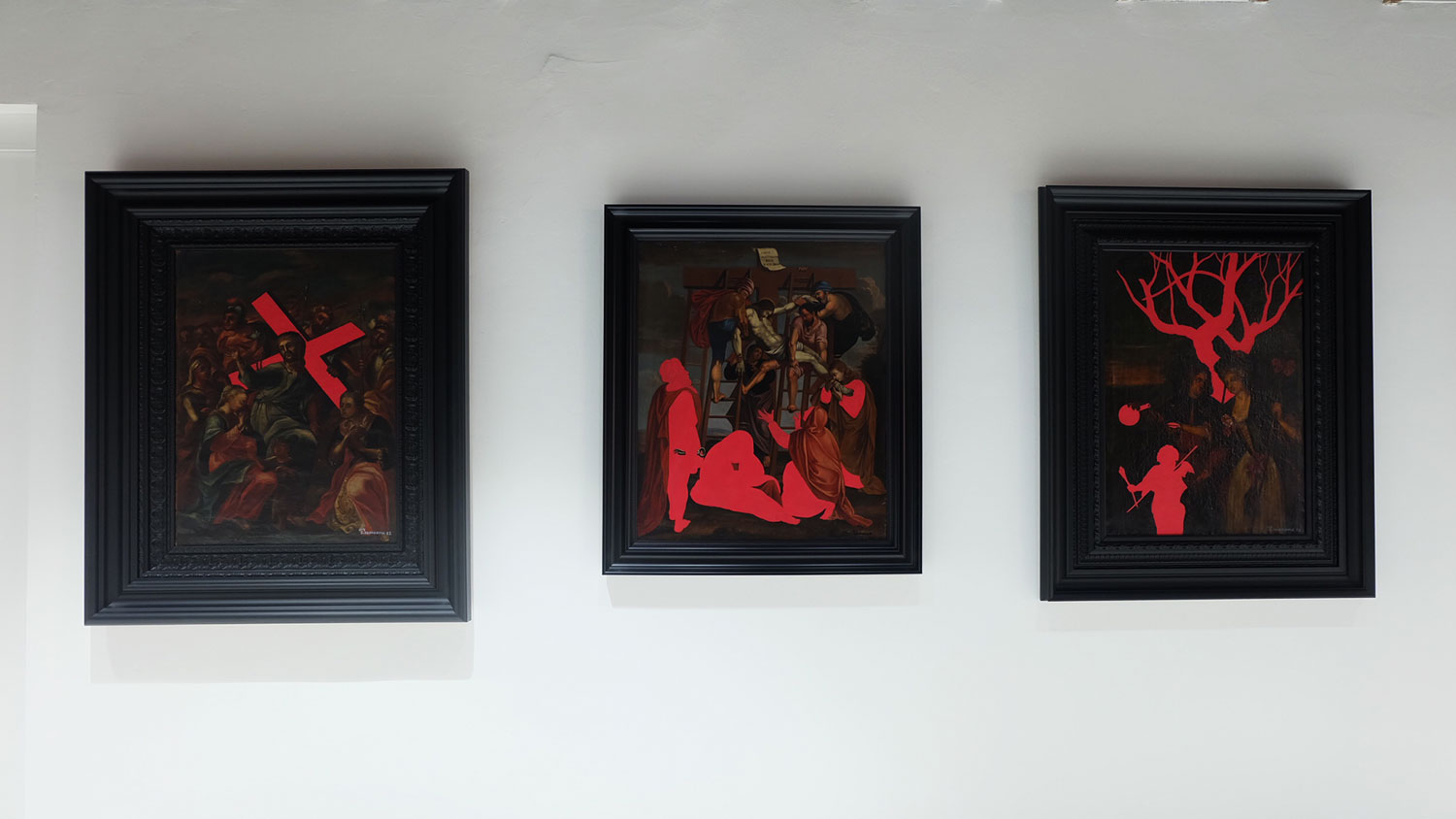 From left, The Red Cross, One Last Touch and Romeo & Juliet.

"She waited for everybody to gather around and smiled as if to bid a final farewell. Her heart rate gradually lowered to zero," he said.

When Alongkorn started the project, he planned to create 93 portraits according to her age, but eventually went for 28 due to his grief. In the process, he realised that he should be happy like his mother. He also felt that because her photos were similar, he shifted from a realistic to an almost abstract painting style. Some of them showed colourful smudges of unrecognisable faces.

"Because my mother already passed away, the person who appears in these portraits is not her. It is as if I am painting my mother, who is no longer my mother. She is a person in my memory," he said.