Thais with Chinese blood constitute over 30% of the country's population. Since the Sukhothai era 700 years ago, Siam and China have maintained a strong relationship on many levels. Evidently, the Chinese quality has in many ways become part of the representation of Thainess, old and contemporary; it is the main foreign culture whose influence on the Thai lifestyle, value and creativity remains strong. 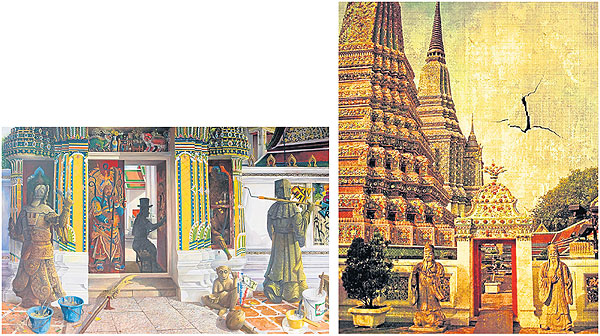 Chinese stone figures feature in Monchai’s painting as a symbol of the Chinese influence in Thai temples.

Artist Monchai Pitayawaraporn _ who is half Chinese himself _ is not only a serious painter, but has also been a well known art tutor to high school students for over a decade. Holding a MA in art from Chulalongkorn University, the artist explores the theme of Thai-Chinese intercultural thinking and manifestations in his latest exhibition, "Critical Times", which is on show at his alma mater's Jamjuree Art Gallery until January 15.

Monchai's aesthetics present the intercultural philosophy of Thai and Chinese beliefs, sometimes interpreted through post-colonial tradition. The illustration of this philosophy demonstrates an appreciation of heterogeneity, differences and the exchange of wisdom in order for a culture to formulate and maintain a unique diversity.

In his paintings, Monchai chose the symbol of Chinese stone figures used as ballast in merchant ships sailing from China to Siam during the reigns of Rama III and Rama IV. Today, these figures can be found in Bangkok's old temples, such as Wat Phra Si Rattana Satsadaram, Wat Phra Chetuphon Vimolmangklararm and Wat Suthat Thepphawararam. 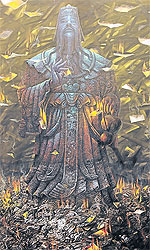 ‘‘No Burning Posture’’ is a satire of a Thai-Chinese ritual.

These figures are ancient Chinese warriors whose majestic poses convey a sense of security and protection. Crystallising this thought, Monchai's "Inherit" (the Thai title is Tamnu Bumrung) depicts the Chinese sculptures in the role of cultural guardians by restoring and cleaning the environment for Thai civilisation which persuade us to realise the crossing of frontiers. Through impressive technical detail, Monchai also portrays a local stone monkey sitting near the entrance inducing people to donate spare change for the temple. The interplay between the two elements speaks volume about the Thai and Chinese mindsets.

Still using the Chinese stone sculpture as a motif, "No-Burning Posture 2011" (Pang Ham Pao) is a painting of an oversized figure of a Chinese angel surrounded by Chinese funeral papers. The angel stands upright over the smouldering ashes of burnt offerings. The artist is suggesting the afterworld presence, probably inspired by his own Thai-Chinese family's ritual that includes the burning of paper items as offerings to their ancestors. These items are meant to make the dead comfortable in their afterlife, and thus paper replicas of luxury cars, phony iPhones, iPads and other high end accessories are consumed by fire and transported to the otherworld. But what is the guarantee that their ancestors will receive them? According to Monchai's statement, few Chinese norms are unreasonable that they won't fit into the context of the changing times. Therefore, some traditions have to move forward or find a new method to maintain their original spirit.

In another brightly coloured piece called "Stunned", a simple Chinese funeral banknote has been enlarged to 1.50 by 2 metres. It signifies the cost of living in this life and in the next _ the banknote has the face value of 10 million of an unnamed currency. Monchai imagines the conflagration that takes place in paradise.

The work makes us think about an unusual situation: heaven is usually presented as a comfortable place that welcomes people who've led good lives. But Monchai incites a sense of agitation in us and asks us to ponder the reductive concept of capitalism that might affect heaven.

It is obvious that the artist harmoniously mixes the concept of Chinese tradition with the Thai chemistry, derived from his personal experience and education to respond to our social environment and the inseparable relationship between the two cultures. 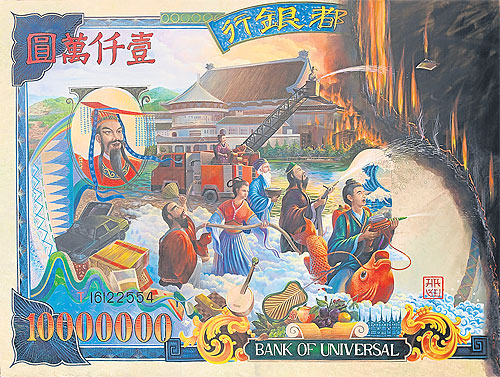 A fake banknote in the painting, ‘‘Stunned’’.