A lissom pin-up girl from the '80s, still endowed with acres of attitude, is now finding favour with a new generation of film-makers

It was the stare that always got you. The bold, direct, Cleopatran stare of a woman who knows that she holds the reins simply because she's very comfortable in her own skin. In the '80s, her fame came from posing for sultry, eroticised photos that steamed up the rooms of men, young and old. Now Penpak Sirikul is 51. She has a 30-year-old son. She has no beau at the moment ("I won't hide, I never hide"). But she stares you down and disembowels you with her smouldering, black-widow heat. Look closely, boys: even now, Penpak doesn't do seduction. She is seduction. 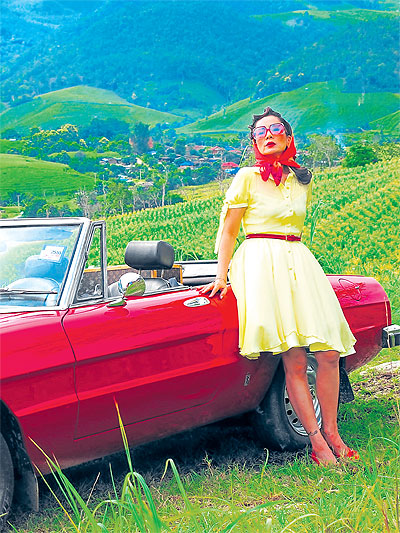 Penpak Sirikul, one of Thailand’s best-known models, plays a transgender in the film It Gets Better . ‘It’s the most liberating role I’ve got,’ she says.

On screen, she infused that luxuriant sensuality into a lot of movies over the past 30 years. Only recently Penpak proved yet again that she still has what it takes to be a leading lady, this at an age when most actresses find their career prospects limited to playing doting mothers. That commanding presence, plus the ease with which she inhabits her body has led to Penpak being re-discovered by young film-makers as a channel for expressing fluid sexuality. The proof is to be found in her next two films: In Mai Dai Kor Hai Ma Rak (It Gets Better), which opens on February 14, she plays a post-operative, male to female transsexual. And in She, slated for a mid-year roll-out, Penpak plays a lesbian; the photo of her kissing a younger woman has already got tongues wagging in the pre-release grapevine.

"I'm not surprised that they cast me. If a director chooses me to play a role, it means that he or she already believes that I can do that role," says Penpak in her characteristic bass voice, full-toned and slightly defiant.

"I have no problem doing it if the role interests me. And playing a ladyboy, of course, is very interesting to me."

Long an object of male fantasies, Penpak is perhaps taking belated revenge for all that lustful obsessing by means of a postmodern ruse: In Mai Dai Kor Hai Ma Rak, she offers to the male gaze not an alluring woman but a very beautiful man, demonstrating the complexities of a modern-day sexuality that defies easy labelling. The footage includes a shot of Penpak _ or of her character, Saitharn, rather _ touching her crotch in front of a mirror and comically reminiscing about something that used to dangle there but was "cut off years ago". It's a melodrama, of course, but its conceit is Shakespearan in reverse: Here's a woman playing a man who has undergone surgery to become a woman. It's not Twelfth Night or As You Like It _ in which a male actor plays a woman who is trying to pass as a man; it's a lot crazier, seedier and much more politically incorrect.

"It's liberating," Penpak says of her role. "Maybe the most liberating role I've ever had, because I don't have to define limits and I don't have a framework. Playing someone you're not is the greatest thing an actor can ask for!"

After winning a beauty contest when she was 19, Penpak became a swimsuit queen and lingerie darling, rising fast in the ranks as she appeared in daring, half-nude poses that showed a slim body packed with high-voltage voluptuousness.

Looking back at pictures from that era, it is obvious that she developed early on the stern, rebellious look that counterpointed, or heightened, the sexual nature of the whole set-up. Penpak's rapid ascent, it could be argued, was the result of a change in public attitudes in this country, the beginning of a gentrification, so to speak, of sexy photos whose subjects would no longer be automatically written off as low-class people of suspect morals.

Movie roles came next. Penpak's first film in 1980 was Dok Sanoh Ban Chao (The sanoh flower blooms in the morning), a drama directed by the veteran Jazz Siam. That same year she starred opposite the young Sorapong Chatree in Fai Narok Khum Lokan (Hell fire), an action flick in which the pair's love scene, shot in a stream, was pretty risque for the standards of the day. It's fair to say that Penpak's reputation caused her to be typecast by directors who only saw her physical attributes; in fact none her early films were memorable for their artistic value or for her acting talents. 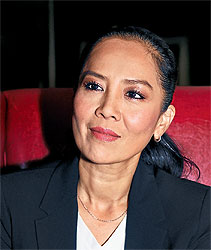 ''In those days, there was hardly any real kissing on the screen,'' she recalls. ''It's always the camera angle and the way the shots are cut that make the audience believe in the love scene. Even in Fai Narok Khum Lokan it's not actually real, even though it looks that way.

''But this image of me as a sexy star came largely from my modelling,'' she continues after a pause. ''Perhaps not that many models were willing to do what I did. I never thought about it that much. I mean, it's a job. If you're a model, you have to be able to wear anything, otherwise you're not doing what you're being paid to do. I never tried to justify my choice of career by saying, 'Oh, I have to do sexy pictures because my mother is sick' or because I desperately need the money. Never. I just do it, and I'm proud of what I do.

''Of course there was criticism, but I didn't pay much attention to it. In those days, there were no tabloid magazines or paparazzi journals. There were only newspaper columnists and they said good or bad things about me. Today, with all these tabloids, it's become a little too much. But I've been around so long that the young reporters know they can't treat me with disrespect. And also, I never hide anything. If I'm seeing someone and they want to know about it so much that they ask questions, I'll tell them. I have nothing to hide.''

That's the typical stance _ at ease but mildly standoffish _ Penpak adopts to deal with players in the tricky world of show business. Over the years, a combination of wise choices and adventurousness has helped her steer a course through the ever-changing currents of public taste. After dabbling with a singing career, 20 years ago, she returned to the big screen and the fashion pages (readers never seem to tire of seeing her in scanty attire). And, in recent years, Penpak has opted to star in small, independent films, a medium that seems to bring out her latent acting skills much more than those early films that were fixated on her anatomy.

''In Hollywood, Meryl Streep can still play the lead,'' she points out. ''Here, it's difficult. There are roles out there written for actresses over 40 or 50, but the investors don't want to risk it because it won't sell well. Most of the time, middle-aged actresses have to play mothers. I play mothers, too, and that's not so hard since I'm a mother in real life,'' she says with a laugh. ''Still, I'm lucky to be getting more diverse roles from young directors, especially in the two new films.''

Thanwarin Sukkhapisit, who directed Mai Dai Kor Hai Ma Rak, has served as an acting coach on many local films but he is probably best known for a high-profile case, two years ago, when his first feature-length film, Insects in the Backyard, was banned by the censorship board.

''I thought of Penpak while I was writing the film,'' he says. ''It had to be a woman playing the role of the transsexual, because real transsexuals have too many emotional layers and that often prevents them from being good actors.

''I've heard some gays and transvestites complaining that I should have cast a katoey [transgender person] in the katoey role. But this decision was based on professional considerations. I had to pick the best actor or actress for the role. Penpak is perfect for the part; she has both sex appeal and a sense of humour. She may no longer be young, but just look at her!''

We'll certainly keep looking at her. Landing two atypical roles, back to back, is no mean feat for a 50-plus Thai actress, but Penpak is taking it all in her stride. She anchors Mai Dai Kor Hai Ma Rak, occupying the emotional centre of the film, and is very likely to get multiple nominations when the next awards season comes round. The fire and the heat, it would seem, are still very much there.

''Growing old? I don't know. It really isn't something that depresses me,'' she says, her tone lively. ''I guess I can deal with the fact that we all get older every passing day. I just keep doing what I want to do.''