Keeping the spirit of the country
Life
Arts & Entertainment

Keeping the spirit of the country

King Bhumibol Adulyadej: A Life's Work _ Thailand's Monarchy in Perspective is in the mould of official histories commissioned by democratic societies. 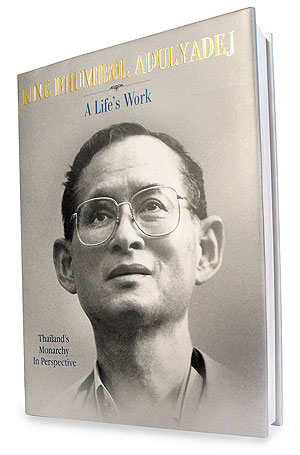 Such official histories are normally written by independent scholars who are given unique access to archives, with the usual understanding that they may write a critical history, but not a hostile one. A Life's Work is written by a committee, which inevitably mutes the critical edge of the text. All the same it is a remarkable feat, and hopefully a model to be emulated by future "official" histories _ of the Thai army, for example.

Publishing, however, remains hemmed in by the strict Thai law on lese majeste, as we know from the banning of Paul Handley's The King Never Smiles (2006). A Life's Work contains a very welcome overview of lese majeste in Thailand, making it clear that each strengthening of the law to its now draconian level was undertaken under military, not democratic, rule. As the book points out, Germany at the beginning of the last century found itself in an escalating conflict over similar laws and was politically deeply divided by them. The Kaiser himself stepped in to defuse the issue in 1904 and the law became a non-issue from there on. In 2005 King Bhumibol made it clear that he was unhappy with the law, but his intervention had little effect and unfortunately he may now be too frail to make a decisive intervention.

Those who claim that the law exists because of a "social consensus" or because of Thai "culture" are given their say here, but they have never been convincing; firstly, because the beefed-up laws were imposed by the military (that is not consensus), and secondly, because Thai culture itself has fundamentally changed during the lifetime of King Bhumibol. People now have new cultural expectations as shown by the dramatic "flight from marriage" by Thai women, particularly in Bangkok, which is a rejection of their "traditional" family role. Changes across the social spectrum manifest themselves politically in the refusal of a huge swathe of the population to comply with pre-existing norms concerning their place in society.

There is no going back to "traditional" Thailand.

If there is one clear lesson for monarchies from the 20th century it is that they cannot be seen as an obstacle to democracy. The defenders of lese-majeste in its present form are today in danger of forcing people to make what would be a fatal choice between monarchy and democracy.

Everyone acknowledges that an era is drawing to a close in Thailand and this in itself produces anxiety, especially among conservatives. A Life's Work tries to sum up the era, and it does so without the adulatory tone of previous tomes published on royal landmark occasions. It attempts to deal frankly with the monarchy's critics and to speak openly about difficult issues. For example, the death of King Ananda, King Bhumibol's brother and predecessor, is discussed succinctly. That his death remains officially a "mystery" to the palace itself, however, ensures that it will be the stuff of conspiracy theories for years to come, because I can't see any new information ever coming to light. Even the exhaustively investigated assassination of US President Kennedy in 1963 still produces arcane conspiracy theories.

The Crown Property Bureau, one of the most powerful economic organisations in the country, comes under special scrutiny, although, as the book says, "it is under no obligation to provide the public with details of its accounts or activities". Its most important function is to give the monarchy as an institution an independent economic base. The private wealth of the King is separate and it is not clear just how wealthy he is. The Bureau is a rather hybrid organisation with features of a state company, a charitable organisation and a modern global firm.

The Privy Council, the King's personal advisory body, also comes under close scrutiny. It was a powerful institution early in King Bhumibol's reign, faded into the background for a while as the King's stature grew and has come into the spotlight again following its alleged involvement in the 2006 coup. It is disingenuous to claim that the Privy Council does not have authority, although officially this is the case. But the tone of the book suggests that the actions of privy councillors like Prem Tinsulanonda have compromised its informal authority.

The important issue in both of these chapters is the power wielded by unrepresentative organisations or figures in modern democracies. It is a problem everywhere, as the scandal involving media tycoon Rupert Murdoch showed last year. Or, closer to home, the enormous economic power of the families gathered around Thaksin Shinawatra, that has been translated into political power. This book, unfortunately, only addresses these issues indirectly.

The most jarring transition in the book is between the chapter on the "sufficiency economy" and the CPB, because the latter is so obviously not practising the former. The King's criticisms of industrialisation and rampant commercialism are pretty much mainstream green with a strong Buddhist twist. Many people are surprised that such unorthodox views are held by a king. The formalisation of the King's theory has met with mixed success, but it attracted strong criticism after the 2006 coup-makers reached for it in a desperate bid to legitimise their actions, using the "sufficiency economy" as a contrasting ideology to that of ousted Prime Minister Thaksin.

The King is both a conservationist and a conservative of a rather special kind. As A Life's Work quotes him, the King "must become a living symbol. He must change with the country but, at the same time, he must keep the spirit of the country". Such a yearning for continuity in change is widely held and there is little doubt that the King symbolises this hope for many Thais.

But this book along with all the other books written about King Bhumibol still does not capture his charisma as a king _ "charisma" meaning a unique ability to use cultural symbols in inventive ways, consciously or unconsciously. The Thai idea of barami is certainly part of this, but charismatic figures can just as easily be bad guys as good guys, or a bit of both. King Bhumibol bundles together a number of seemingly contradictory images, the king as a jazz musician and a greenie, but also one who has a deep concern for decorum and a leaning towards "guided" democracy. The book doesn't hesitate to show his impatience with the squabbling inherent in multi-party systems, for instance. Whatever it is, his charisma has served him and the monarchy well.

This book will be dismissed outright as an apologia by anti-monarchists, who, it must be said, have grown rapidly in number in Thailand since the 2006 military coup. That many saw it as a "royalist" coup illustrates the monarchy's precarious relationship with democracy. On the other hand the book's attempt to deal evenly with the history of King Bhumibol's reign will give little comfort to hardline royalists who wish to turn the clock back. It will, however, appeal to the large majority of Thais, and others, who as modern, educated citizens want a rational discussion not only about the country's past, but its future as well. That the book will appear soon in Thai translation is a good sign.

Grant Evans is the author of The Last Century of Lao Royalty (2009) and the revised edition of his Short History of Laos will soon be published by Silkworm Books.