The Khmer Rouge, headlong and senseless, arrived in Phnom Penh and spoiled the party. During the so-called Golden Age of Cambodian cinema, from the 1960s to the early '70s, almost 400 films were released in the country. A number of them travelled across the border and were screened in Thai cinemas, some gaining the status of popular entertainment, and at least one, featuring a chattering snake and his love affair with a beautiful woman, becoming a classic remembered today by Thais as a lost, distant dream. 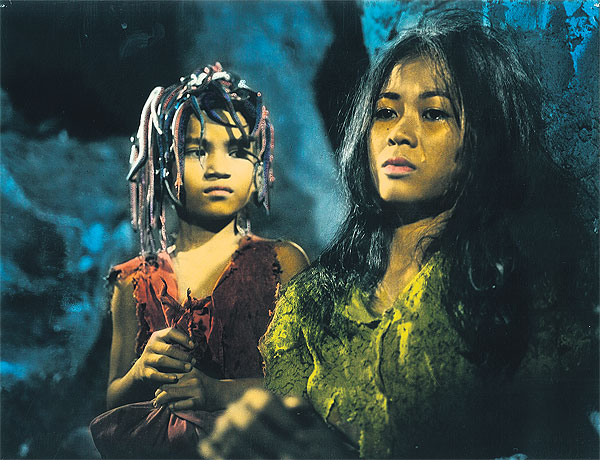 Puos Keng Kang , known to Thai people as Ngu Keng Kong , is the most famous Cambodia movie that was recently screened in a retrospective of classic Khmer cinema in Berlin.

All Cambodian film-makers of those years were self-taught. They threw in their cauldron a recipe of primitivism, witchcraft, melodrama and folk horror that resulted in a cinema that bustled with colour and smelled of fragrant earth. When the Khmer Rouge approached the capital in 1975, however, the light from the projector grew dark. Artists and film-makers fled for their lives, many didn't make it, and out of the 400 movies made during those years, no more than 30 survived. It is one of the biggest losses in the history of Southeast Asian cinema.

Tea Lim Koun fled, too, at one point clutching a 16mm print of one of his films as he boarded the last airlift out of Phnom Penh. There had been bombs in the cinemas, and as the rebel advanced the curfew forced movie theatres to shut down. Intellectuals, writers, actors and artists were among those the Khmer Rouge made a priority to kill. 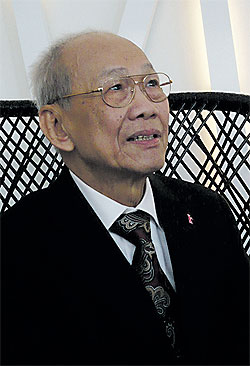 "Let's not talk about politics today. Let's talk about art, let's talk about movies," said Mr Tea, a legendary Khmer director who made Cambodia's most famous film, 1970's Puos Keng Kang (known in Thailand as Ngu Keng Kong). After decades of living in Montreal, Tea, now in his eighties, travelled to the Berlin International Film Festival last month where two of his works, Puos Keng Kang and Peov Chouk Sor, the one he managed to save on the last flight out of the falling city, were shown for the first time in almost four decades.

"I made 11 films, only six were saved and the rest were destroyed. I'm glad that at least I got a chance to show what I still have."

At the Berlin screenings, Tea Lim Koun arrived with two Khmer film-makers, the effusive Ly Bun Yim and Ly You Sreang, as well as Cambodia's best-known actress in its pitifully short cinema history, Dy Saveth. Such a gathering should've taken place in Phnom Penh, or at least Bangkok.

This unearthing of popular Khmer movies of yore happened out of historical curiosity and amidst the hope that since the situation in Cambodia has become stable _ if we turn a blind eye to the spats along the Thai-Cambodian border _ young Khmer film-makers are beginning to discover their film history and regard film again as a means of looking into the past, and the future.

Along with four old Cambodian films, the Berlin festival also screened a new documentary called Golden Slumbers, made by Paris-based French-Cambodian director Davy Chou. The documentary casts a probing, nostalgic look at the Golden Age of Khmer movies, and the young director was instrumental in the recent revival of his country's cinematic heritage. Golden Slumbers will be shown at the Thai Film Archive later this month.

The story of vintage Cambodian films is the story of a missing link in the study of film history. It is also a story of how, in pre-Asean days, the transmigration of proto-pop culture between Thailand and Cambodia had been mutual, natural and fairly rich. In Berlin, Ly Bun Yim's 1968 film, Puthisen Neang Kongrey, whose source story is known among Thais under the title Nang Sibsong or Prarot Meri, was screened from 16mm print in the Thai-dubbed version. 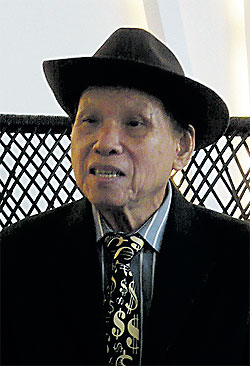 Meanwhile Tea Lim Koun's serpent-lover film Puos Keng Kang had a sequel co-starring Thai actress Aranya Namwong with Khmer duo Dy Saveth and Jia Yuthorn. ''Before Puos Keng Kang, there were at least five Cambodian films released in Bangkok,'' said Tea, who speaks some Thai since he stayed in Ekamai briefly before immigrating to Canada. ''At that time I wasn't sure that my film would be successful among Thai audiences, but to my surprise, it was. We showed it at Muang Thong Theatre in Pratunam, in 1971, and a lot of people came to see it.''

Puos Keng Kang tells the story of a magical snake who turns into a man and falls in love with a woman; they get married and she gives birth to a girl whose head is crowned with a squirming nest of vipers, Medusa-style. Part innocence, part deadpan-surrealism, this fantasy of inter-species romance was a hit not just in Thailand, but also in Indonesia, Singapore, Vietnam and the Philippines. It remains the most recognised Cambodian film in history (in another case of Siamese-Khmer hybrid, in 2001 Fay Sam Ang remade Puos Keng Kang starring a Cambodian actress and Thai actors).

Tea, who as a young man fed on the staple of Chinese, French, Thai and Indian movie available in Phnom Penh, said he made Puos Keng Kang with the aim to push Khmer cinema to the international market. ''I believe Cambodian films can be more accepted by people outside the country,'' he said. Perhaps he was on the right path of making that happen, if only history had been a little kinder to Cambodia.

In the early '70s, Ly Bun Yim, who was present in Berlin, was preparing to show his film Nang Sib Song in India and Bangkok when the situation grew precarious in Phnom Penh. He already had the film dubbed into Thai for the Bangkok release, but had to cancel everything when the war broke out. When he escaped to Bangkok, France, and later to Canada, with the help of Tea Lim Koun, that's the only copy of the film Ly took with him _ and that's why the 16mm screening of Nang Sib Song in Berlin was in Thai, even though the film had never been shown in Thailand before.

Ly Bun Yim managed to save just three out of his 20 films, meanwhile Ly You Sreang, another director whose work include tantalising titles like The Virgin Demon and The Sacred Pond, lost all the films he made in the 1960s when he fled the escalating atrocities to Laos and France. 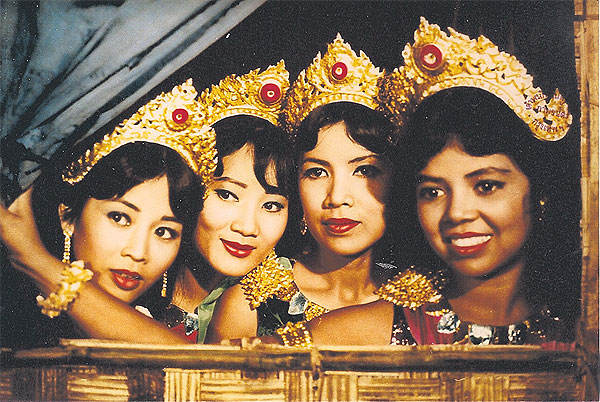 Peov Chouk Sor , a film about an angel who gets stuck on Earth, was saved from destruction when the director carried its print on the last airlift out of Phnom Penh.

''I released Nang Sib Song in Cambodia in 1968. It was shown in all provinces, then a theatre in Thailand contacted me to bring the film,'' said Ly Bun Yim, a smiling character with a tendency for long speeches. ''I used to screen my film The Invisible Man in Bangkok before, and for Nang Sib Song, I asked for the best voice dubbers you have. We eventually used Sompong [Pongmit] and Juree [O-siri]. They did the dubbing perfectly, but too bad the situation in Cambodia became worse and we had to stop everything.

''I went to Bangkok once and tried to bring my parents out. Then I went back to Cambodia again and left for France at the end of 1976. The Thai-dubbed print of Nang Sib Song was stored in Thailand so it was safe [though later it found its way to California where his son lives]. It had hardly been shown anywhere before this event in Berlin.''

It is easy to imagine Nang Sib Song as a hit had it been screened here; it tells the story of 12 sisters, all married to one prince, whose eyes were gouged out by a jealous ogress. Popular Cambodian films from that period _ as opposed to the highbrow output of King Norodom Sihanouk, the film-making monarch whose movies were safe from Khmer Rouge destruction _ drew on the Third-World sources of myth, folklore, horror, magic and a kind of visceral sensationalism that defines the mainstream taste of mass audiences in this part of the world. A large number of Khmer films feature angels, ogres, talking animals and home-made special effects, as supernatural elements insert themselves, without warning or alarm, into mundane reality. This is old-fashioned by today's standard, even naive, but in terms of cinema archaeology, the rarity and near-extinction of such films and their time-locked sincerity entitle them with a unique historical value. 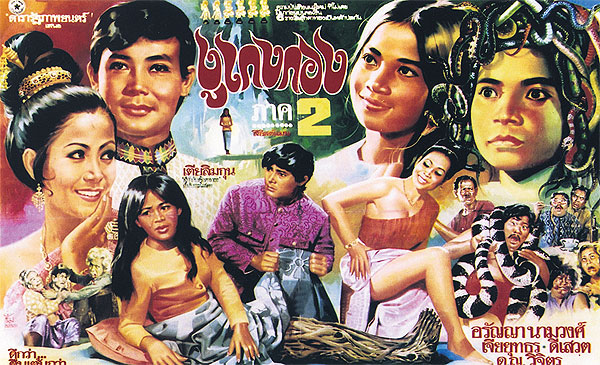 The Thai poster of Ngu Keng Kong when the film was released in Thailand.

''Those stories and style are part of Cambodian culture,'' said Tea Lim Koun. ''This is what the audience liked _ miracles, witchcraft, ghosts, pure melodrama, love stories. The sadness and the drama are what people want to see, and we made it for the people.''

The re-emergence of Puos Keng Kang, Nang Sib Song and Peov Chouk Sor _ it's possible that the films will tour other countries _ at least brings back the memory of a cinema culture that was largely forgotten. Films that have come out of Cambodia in the past 20 years belong mostly to one man, Rithy Panh, a Paris-based filmmaker whose famous works are documentary features that probe the Khmer Rouge horror. Meanwhile, according to Davy Chou of Golden Slumbers, a new crop of young filmmakers in Cambodia are discovering the power of documentary to reflect the reality of life in their country, the place that's slowly waking up from a long sleep like a stone snake in Puos Keng Kang, rising to breathe and live once again.