Dy Saveth, the 'Actress of Tears'

In the movies from the 1960s, Dy Saveth was a slender, fair-skinned beauty with a lovely little mouth and the demure mannerism of a leading lady. From a certain angle, she reminds one of the young Zhang Ziyi, though the Cambodian star has a more earthly, Indo-Chinese appeal. Today Dy Saveth, who was born in 1944 and who also starred in a couple of Thai films in the early '70s, has the regal look of an unruffled madam. Her face hardly bears the scars of hardship that the arrival of the Khmer Rouge forced her to live, in exile, for almost 20 years. 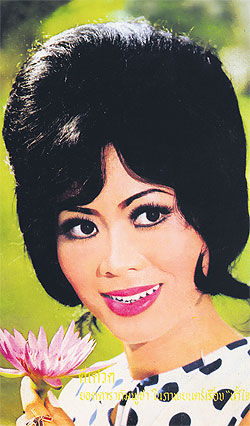 "I won a beauty contest, and I started my career doing fashion shows," said Dy Saveth. "After my mother died, my sister pushed me to be in the movies, and I finally did."

Her first film was in 1964, a drama called The Raft of Life. In the script, her character had to cry, and Dy Saveth drew on her personal experience by thinking of her late mother and the tears came streaming. Soon she'd be known in the industry as the "Actress of Tears".

Altogether Dy Saveth starred in nearly 100 films during the 1960s and early '70s. In her busiest period, she'd shoot two or three films a day _ this is a similar situation as Thai actors and actresses of those years. Of all the directors she worked with, Dy Saveth cited Tea Lim Koun as her mentor, and it's fitting that her most famous role was in Puos Keng Kang, in which she plays a millionaire's daughter who falls in love with a snake-man. Her character gives birth to a daughter whose head is covered with baby snakes, and in the last reel of the film, Dy Saveth became a possessed captive of a grotesque witch bent on destroying her life.

At the peak of her fame, she crossed the frontiers to work with Thai director Sor Asanajinda in the 1971 film, Rak Kham Kob Fa, in which she sings a duet with Thai actor Sombat Methanee (using voice dubbers). In the same year, she also starred in a Thai film, Nam Jai Por Kha, and co-starred with Thai actress Aranya Namwong in the sequel to Puos Keng Kang.

But all was over when the Khmer Rouge took control of the country. "In March 1975 I knew I had to leave Phnom Penh," she recalls. "I went with my uncle to the airport, but there were no more flights. At that point, a bomb went off and we ran. My uncle then recognised a colonel whom he knew from before, and he begged him to take me on a helicopter to Battambang. From there, I came to Thailand.

"I lost at least 10 family members in the war." 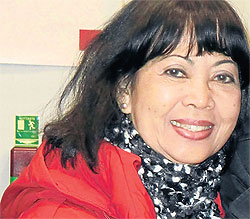 From Thailand, Dy Saveth went to France. She lived with a friend of a friend in Paris for a while, before moving to Nice, where she found work as a nanny. The great actress had to be content with a humble life in a faraway land, though when she talked about it, Dy Saveth maintained an insouciant smile as she recalled that episode.

In 1994, Dy Saveth decided to return to Cambodia. She made a vow to herself to forget about movies, to blind herself from her glorious past that only served to hurt her soul. "All my friends were dead, and I hid myself from the public," she said. "Sometimes I even covered my face when I went out for fear of people recognising me."

But one day when she went to Sihanoukville, fate conspired against _ or in favour of _ her.

"Someone heard me speak, and he recognised my voice! It was unbelievable but that was it, and soon I found myself on TV again, acting and giving interview. C'est ma vie _ that's my life."