Japanese artist Eiji Sumi feels at home in Bangkok due to the familiar sight of tangled power cables. The artist from Tokyo is now based in New York City, and Sumi realises how living in a place that puts all the power cables underground makes it more orderly and beautiful. This observation has led him to create his first solo exhibition in this City of Angels.

LEFT Eiji Sumi, standing next to his drawing of the spectacular Wat Phra Si Sanphet in Ayutthaya. The drawing shows an example of beautiful scenery in Thailand that is free from power cables.

With the support of Japan Foundation, the artist has recently launched his debut showcase, "Densen/Plus a", a mixed-media exhibition that aims to raise awareness of the need to put power cables underground.

Sumi has turned a simple white room in Koi Art Gallery into a visual playground where fake power cables have been built across the hall, leading the eyes of the audience to the glass window, where outside on the Sukhumvit street stands a pole holding black power cables.

By experimenting with different choices of medium used in his work, Sumi's show offers audiences different messages centred around his theme. At the opening, the artist played a soundtrack designed by fellow artist Niklas Moller that reminds listeners of the frenzied sound of electrical currents, where the lighting was designed to play with the power cable sculpture.

At the event, audiences have a chance to witness his single-line drawing that was curated by Eric Shiner at the Andy Warhol Museum.

Life talks to Eiji Sumi about his debut exhibition in Bangkok. 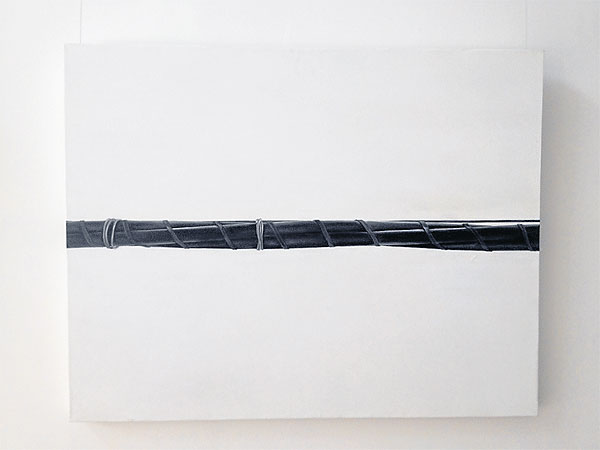 Bundle in a day— the beautiful side of a power cable.

What is the concept of your show "Densen/Plus a"?

The main theme is the power cables, as you can see on the streets of Bangkok. I grew up in Tokyo and we have these too. In Tokyo, only 3% of the power cables are underground, and I believe in Bangkok it is probably the same. Now I live in New York and I don't see them any more. And I wish that in the future they are put underground like in other big cities such as Paris or London. But, at the same time, I want to show how to enjoy living with them. I'm trying to look at this issue from a different [angle]. For example, with the painting, I'm showing the beautiful side of it.

Why do you choose to work with different mediums?

In this exhibition, I have one theme to play with, but I want to explore it with different mediums. Painting gives you one [angle], while other mediums such as projection or animation [allows the artist to explore] the theme differently.

How many mediums are you using in this exhibition?

For the artwork, it's seven, then I also have a soundtrack for the show, as well.

Which medium is your favourite?

Lately, I've been working a lot with lighting. A lot of people probably see me as a lighting artist. Several of my previous works were lighting installations.

I used to work for an interior design company that makes lighting. Back then, I did a graphic design for a wall panel. While I was there, there were people who worked in the lighting section (lighting designers). I found it very interesting and I thought I could try to do it myself. You know, when the light is [switched on], that's a magic moment for me. You never know what will happen, until you switch the light on. It could be better or worse than you planned. It is full of surprises.

Do you think your artworks have a Japanese influence?

That's something for the audience to decide, but I guess the simplicity in my work could be it.

You have been in New York for a long time. What is exciting now in the New York art scene?

Basically, everything comes to New York, I would say. For example, Ai Weiwei from China has exhibited in Beijing, Shanghai and London, but eventually came to New York. So, in New York you get to see works from famous artists from around the world _ it's very educational.

Is there any particular artist that has inspired your work?

Many artists inspire [me]. I do like work from Joseph Beuys, James Turrell and Eva Hesse, just to name a few.

Are you an artist who usually creates work about issues or by experimenting?

This is actually my first exhibition with a social statement. I've been working with visual aesthetics quite a bit. This time, it is because I am a Japanese artist coming to Bangkok from New York _ I wanted to have something that is a bit more meaningful.