A picture speaks louder than words, and so did the body language of dancers from Dream Country _ A Lost Monologue, during the Singapore Art Festival 2012 last week. 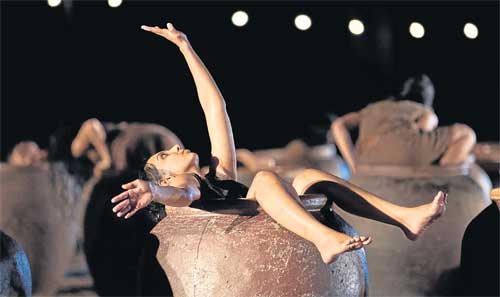 Her performance was based on a monologue written by Malaysian playwright Leow Puay Tin, that tells a story of a young girl who takes her mother to the "old country" to die.

Exclusively for the Singapore Art Festival, together with two choreographers from Malaysia, Anne James and Charlene Rajendran, and three from Singapore, Claire Wong, Natalie Hennedige and Zizi Azah, D'Cruz and the collaborators expanded her original version into a lavish performance for 35 dancers, for the 35th edition of the festival, with a different title and a brand-new interpretation.

The Singapore Art Festival won the audience's heart by giving this free-of-charge performance. The stage was set at the corner of the Esplanade Park, embraced by the cool shade of big trees with a backdrop of Singapore's skyline.

The audience was seated in a semi-circle around the performance space where 35 urns, each covered with gunnysack, were dotted irregularly.

Everyone was quiet and the air ripe with expectation as we waited for the show to begin.

After a few minutes, we saw hands creeping out of the urns _ toom, or water jars _ some making a crawling gesture that reminds many of tendrils or centipedes, depending on your imagination or stock of dreams.

And later, from each urn emerged a female dancer, of differing age and body size, dressed in natural fabric clothes, looking lost and frightened. 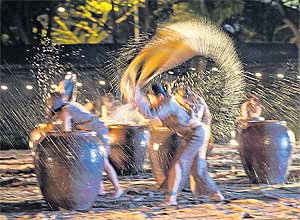 At first, they were afraid to leave their urns, but as seconds passed, some of them managed to interact with each other. All this without a single word being exchanged _ just eye contact and the silent geometry of body language. Their animated movement was raw, fresh, and enthralling.

According to the organiser, in the first stage, each choreographer auditioned her own group of dancers. Some only worked with young professional dancers, or a mixed group of dancers of different ages, while some preferred to audition amateurs who had no experience.

After working under each mentor, the piece was later put together. Apparently, the process helped form the shape and structure of the overall performance, as the variety of movement offered different perspectives, yet audiences could feel the sense of harmony throughout.

There was a time when I felt that it would be much better to have some sort of music or rhythm to anchor the performance in front of me, as it was overwhelming to observe 35 women acting differently all at once.

Like meditation, your eyes may be closed but your mind is full of thought that jumps in your head, but once it is all settled you get to appreciate the peaceful moment. And I decided to do just that to take in the experience offered by Dream Country.

Another surprise came, as audiences discovered that each urn was filled with water, and the dancer began to play with it. Some were splashing water with joy, while others grabbed the gunnysack and dipped it into the water, and then hit the sack on the urns or the ground in a playful manner.

Most of the time each dancer expressed their feeling or played with the props and the stage without any seeming co-ordination. However, from time to time, we saw a synchronised movement where some of the dancers moved in military style or when all of them stood silently on top of the urns.

There was an awkward moment when all the dancers split into three groups and posed as if they were models doing a fashion shoot, and that caused the audiences to start clapping as many assumed it was the end, but it was not.

The highlight of the piece was during the end as the rain started to drizzle. The 35 female dancers walked toward the end of the stage, standing in one row facing the audience.

Then each began to walk forward, some of them walked through the crowd, until each stopped moving. We finally had a closer look at some of the dancers, make-up free, looking as if they had questions to ask the crowds.

The dancers and directors of Dream Country succeeded in giving the audience a visual experience of life, of living it. From the beginning to the end, it was all about women and water, two of the most important things that connect human beings to the world, our mother and our Mother Nature.

You may call it a feminist work because of its all-female cast as well as all-female directors, and female audiences surely have different reactions from men. But when it comes to life, male or female, the label of gender is supplementary to the larger fact that we all live and die.

In terms of performance, we experienced both chaotic and peaceful moments on stage.

The show gave the audience indirect messages and fragments of thoughts that anyone could pick up whenever it echoed with their personal experiences, or simply observe the natural beauty of women and the intimate body expression of the dancers as they appeared.

It was a meditative hour for me, to be precise. The show gave the spectators a chance to stay calm and listen to our inner voices.

To know one is dead or alive, we listen to our natural rhythm, our heartbeats. Therefore, as long as we are alive, listen to our rhythm of life and never give up, until its very last beat.