Every morning at first light, Ajarn Sumano Bhikkhu leaves Tum Song Dtah, otherwise known as the Double-Eyed Cave Retreat, at Pak Chong in Thailand's Khao Yai Mountains. He walks nearly 5km from the cave he calls home to collect alms at a nearby village. There's nothing unusual in this. Monks have been performing this ritual for hundreds of years. 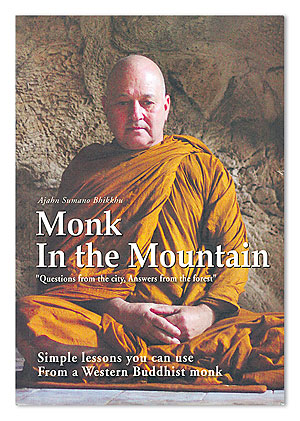 What is unusual, however, is that Ajarn Sumano is a 77-year-old American who, in a past life, was a highly successful businessman in Chicago and served briefly in the US navy. However, he eventually became jaded with corporate and military life, so he moved to Thailand where he became a Buddhist monk.

The Double-Eyed Cave Retreat has been his home for the past 30 years.

"I discovered this cave on a walkabout through Thailand," he recalls. "It's become a sanctuary that's stimulated my creativity. I began to write small booklets on Buddhism and soon I discovered that what started as a hobby was becoming a passion.

Over the years, Ajarn Sumano's produced some significant work, such as Taming The Monkey Mind, as well as a host of smaller booklets. Some have been self-published, while others have been printed and distributed by Asia Books. He's also translated some booklets from Thai to English as he speaks, reads and writes fluent Thai.

Now his perseverance with the ageing solar-powered laptop has finally paid off. He has produced what many people consider to be the ultimate book on Buddhism, Monk In The Mountain. It was first published in 2007 in such numbers that it is still available at Asia Books outlets and airport bookshops across Thailand for 650 baht. It's a sequel to a book he wrote titled Questions From The City, Answers From The Forest, which sold out and is no longer available. That book dealt with questions from people who visited the national park adjacent to his cave. His visitors spoke to him about their personal problems as well as their concerns about such things as corrupt governments and environmental problems facing the planet.

Monk In The Mountain continues in this vein. Over the years Ajarn Sumano's documented the many issues visitors to his cave have discussed with him, and the solutions he's offered to them.

In this regard, it's a very practical guide to living one's life in the best possible way, being guided by Buddha's teachings and in turn preparing for one's next life.

One visitor, a career soldier who believed that his was the highest profession that any human could strive to attain, was intrigued that Ajarn Sumano had chosen to become a monk, especially in light of his previous military experience.

"I'm curious to know why you think that being a monk is the ultimate way to live your life," he said. "I simply see you as a good person helping people solve the problems in their lives," as if to suggest that it was a crying shame that all that military expertise gained in America, such as killing people and blowing things up, was just going to waste.

Ajarn Sumano simply replied: "My life is dedicated to conquering myself. That may not sound like much until you've tried it. But it's the toughest, most exhausting task that anyone can take on. There is far more to this journey than meets the eye."

But his quest to impart knowledge isn't limited to sitting in his cave writing and receiving visitors. Ajarn Sumano has a fairly hands-on approach to teaching, as he demonstrated during one of his many visits to a large international school in Bangkok.

"You should realise that things that end, begin again. You die at night and wake up in the morning. If that theory makes sense to you, then the fear of death will go away," he tells the spellbound students. "You're going to get reborn again. Depend on karma _ that's why you want to live life the best way you can, so you can be reborn as a better person."

The informal get-together ends with a brief introduction to the art of meditation, an activity proven to strengthen the mind, which in turn strengthens the body. Ajarn Sumano's dedication to Buddhism and meditation is an example to many Thais who simply pay lip service to their religion. Maybe this is why his book is such a revelation in that it's a look at Buddhism through the eyes of an outsider, rather than the certain sameness contained in the plethora of books written by Thai Buddhist monks.

"So what do I mean when I say everyone dies, but no one is dead?" he asks. "This is a very fundamental aspect of Buddhist teaching. Man's death is the least of all things material. What is left to the world are his virtues and vices."

Monk In The Mountain is available at all Asia Books outlets across Thailand. However, anyone wishing to know more about the meaning of life, death, reincarnation and the constantly revolving wheel of karma, can contact Ajarn Sumano through his website, www.next-life.com.