Why we need him
Life
Arts & Entertainment

Why we need him

Far from ignoring Asia, Jake Needham writes about it with aplomb

International novelists ignore Asia most of the time, which may be a good thing since the few who don't generally write about it in such a cliche-strewn and provincial fashion that they end up, in most cases, embarrassing people who actually live here. 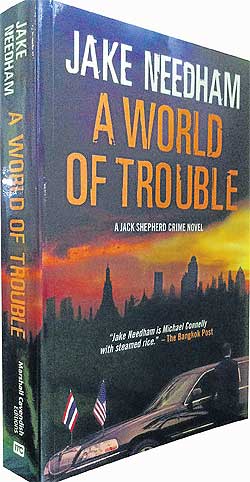 A couple of decades ago, there was a grand tradition of mainstream books and movies that featured expatriate tales set against the broad Asia-Pacific canvas. Novelists like James Clavell, John le Carre, and James Michener come readily to mind, as do film stars Robert Mitchum in Macau, Steve McQueen in The Sand Pebbles, and William Holden in The World Of Suzie Wong.

So what happened? The purveyors of popular entertainment in places like the US and the UK simply decreed that Asia was out of style and banished it from contemporary culture _ except of course for the cringe-inducing dim-wittedness of The Hangover Part II.

Needham is an American, a one-time resident of Bangkok, and the author of novels you probably already know such as The Big Mango, The Ambassador's Wife, and Killing Plato.

The most interesting thing about Needham's books may be his choice of subject matter. His tales of private dislocation and personal expatriation in exotic locales draw exclusively on contemporary Asia for their backgrounds.

Of course, that's hardly a promising career path for any American novelist to choose these days, not if he aspires to have his books widely distributed and well reviewed in his home country. And that may well be the reason that Needham's novels are not available in his home country at all.

It's clearly America's loss, since Needham's novels are bestsellers all over Asia, in Europe and in the UK.

Needham's most recent book, A World Of Trouble, has just become available here in Thailand and, as usual, it's a provocative read.

Needham channels John le Carre in a raw, authentic rendering of a tale of international intrigue that is genuinely believable.

Needham's protagonist is Jack Shepherd, the endearingly wiseass American we previously met in Laundry Man and Killing Plato. In A World Of Trouble, Shepherd has evolved into something of a cross between Humphrey Bogart's Rick Blaine and Orson Welles' Harry Lime, hardly surprising since the novel itself is a kind of cross between Casablanca and The Third Man.

Both of those much-loved dramas of Americans trapped in exotic lands were set against World War II. But, like A World Of Trouble, they are really stories of ungainly personal relationships and how the simple human decency of those relationships prevails no matter what earth-shattering events may be bursting around them. Ultimately, A World Of Trouble is very much the same kind of tale: one of friendship, loyalty, and betrayal set against the backdrop of a country enduring extreme social and political upheaval.

At the end of Killing Plato, Shepherd was pushed out of his post at Chulalongkorn University and in A World Of Trouble he has hit the road looking for a new start and a new job. After winding up in Hong Kong he is enlisted as General Chalerm "Charlie" Kitnarock's lawyer.

But Charlie is not your average expat military man, he's also the world's 98th richest and a former Thai prime minister living in exile in Dubai. He spends his time making money and plotting his return to political power.

For Shepherd, Kitnarock's potential return causes problems. Thailand already has a prime minister, and she's a woman with whom Shepherd had a brief flirtation in Killing Plato. Things will get messy for Shepherd if Charlie is as determined to return to power as Shepherd thinks he is. It could get even messier for Thailand and, as odd as it might sound, Shepherd may be the only person on Earth who can prevent his two friends from destroying each other and keeping Thailand from sliding over the edge.

Perhaps none of this makes the plot of A World Of Trouble sound particularly innovative, but that really doesn't matter. What does matter is the way Needham spins a tale solidly rooted in events you already know about, or think you know about, and reveals those events in ways you never even imagined.

His prose has a kind of masculine lyricism that is almost quaint in an age of airport bookshelves brimming with the likes of Harold Coben and Robert Ludlum. It's clean, smooth and smart.

Needham's tale of Thailand on the brink has a sense of old-fashioned elegance and a prose style that's like the casual grace of a perfectly tailored English tweed jacket. Not a word too many, not a word too few, and presto, a society simultaneously brutal and graceful is wonderfully illuminated.

Needham displays an insider's knowledge of Thailand that may make some people here uncomfortable. But A World Of Trouble is one terrific novel.

Promoting a culture of reading

Reflecting on the many losses

Indulge in your favourite dishes at EmQuartier, Emporium