The making of an icon
Life
Arts & Entertainment

The making of an icon

Tatchakorn Yeerum, also Panom Yeerum and Worawit Yeerum but most commonly known in Thailand as Ja Panom, was born in 1976 in Surin province as part of the Khmer-speaking minority at a time when there was a lot of border strife and military activity in the area. He says he honed his quickness by running from bombs.

Jaa grew up watching films by Bruce Lee, Jackie Chan, Vince Lam and Jet Li, who inspired him to learn martial arts. He imitated their moves in his father's rice paddy and began learning muay Thai at 10.

At 15 he became a protege of Kerd Ma Lui (Born to Fight) director and stunt choreographer Panna Rittikrai and later studied at the Maha Sarakham College of Physical Education. He trained in taekwondo and muay Thai but never had a competitive career as a fighter. To complement his stunt work, Jaa also trained in aikido, Brazilian jiu-jitsu and in the high jump. He was a stunt double in several films including Mortal Kombat: Annihilation (1997). 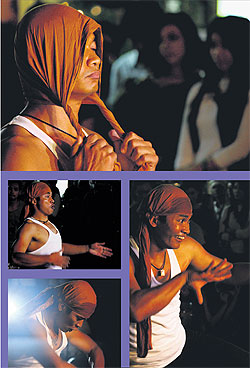 ALL THE RIGHT MOVES: Above, Tony Jaa’s street dance. Below, ‘Unstoppable’ by Matt Diamond.

He developed an extraordinary vertical leap, and one of his iconic stunts is jumping over two cars parked side by side. He can easily jump over a person, or kick a board nearly three and a half metres off the ground. He often jumped from one elephant to another to develop balance.

Panna and Jaa developed an interest in muay boran, an ancient, acrobatic precursor to muay Thai, and worked and trained for a year, developing a film around it. Producer-director Prachya Pinkaew later used this work to create Ong-Bak: Muay Thai Warrior in 2003, Jaa's break-out role as a lead action star. Jaa did all the acrobatic stunts without wires, mechanical help or computer-generated effects, and he remains faithful to the minimalist approach.

For training, Jaa focuses more on balance and finesse than power; he doesn't lift weights but every day does gymnastics exercises and muay Thai moves, along with handstands and meditation. He likes to eat Isan food such as som tam and sticky rice, supplemented with bread and milk for energy.

In 2010, Jaa ordained as a Buddhist monk in Surin. He married long-time girlfriend Piyarat "Boong-gyi" Chotiwattananont at the end of last year and the wedding reception was in May. A daughter was born on Oct 6.