Entertaining Thai film romanticises working for 'the man', but at what cost?

This much is clear: having a character complain about the sin of making money doesn't constitute a criticism of capitalism. It's doubly laughable when that character is, apparently, rich _ no, her parents are rich, maybe super rich. Evidence abounds in the sometimes funny, mostly shallow Thai film Yod Manut Ngoen Duen (Super Salary Man), released this week with a clear-eyed target of salaried earners who're awaiting the news of year-end bonus with a throbbing heart. In fact the film, disguised as a rebuke of the robotised mindset of white-collar existence, is a love ode to corporate mentality. Capitalism is bad, oh yeah, long live capitalism. 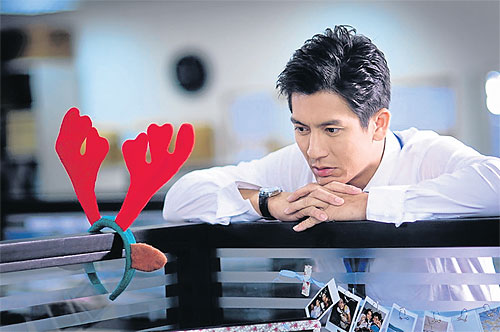 Jessadaporn Pholdee, so handsome and monotonous, plays Pan, the marketing head who dishes out investment advice and takes pride in his money making obsession. He rules like a disciplinarian over a team made up of crummy-looking staff who're working round the clock to launch a new product _ a crummy-looking vitamin drink _ before the year-end, so the company's board will lavish them with a bonus. In comes the rich kid who "doesn't get how these people [meaning those poorer than her] can get up before dawn and get stuck in horrible traffic only to work in cramped cubicles all day". She, named Wai (Natchalai Sukkamongkol), wants everybody to lighten up and pursue their "dreams" _ hers is writing a comic book, which is way cooler than working in a cramped cubicle.

Of course, Wai and Pan will soon learn their lesson _ quickly, superficially, like the New Year's fireworks _ and then they'll go back to doing exactly what they wanted to do in the first place.

To be fair the movie is adequately entertaining, and the script, besides its heavy dependence on stereotypes and generalisation, knows when to hit the nail on the head and milks its big message, namely, toil away for your companies, brothers and sisters, because there's something bigger, higher, more satisfyingly redemptive than your year-end bonus. Nothing wrong with that, and I even welcome the fact that we have a film about the workplace, which is rare here. But the way the movie exaggerates and then romanticises white-collar life, or necessity, as well as the way it glorifies the so-called "indie" lifestyle, which sounds more and more like soap-opera jargon these days, is something close to patronisation.

And because the characters represent preconceived ideas, rather than real people, I find it hard to cheer along with them despite the fact that I'm writing this in a cramped cubicle anxiously waiting for my year-end bonus, too.