Softly does it
Life
Arts & Entertainment

The oddball killers and garrulous crime bosses in Killing Them Softly remind us of Quentin Tarantino's back catalogue, with less sharp-edge conviction and self-conscious giggling. Those drawn to the film only because it has Brad Pitt splashed on the poster (see page 4) will have head-scratching moments _ and not all of them unpleasant. 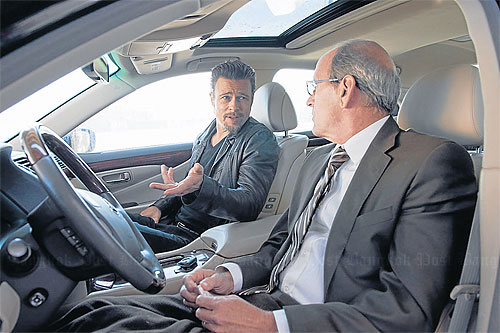 In adapting the novel by the potboiling author George V Higgins, director Andrew Dominik attempts something strange and slightly schematic: the collapse of organised crime is a metaphor for the US economic meltdown.

That scheme is clearly visible though not particularly remarkable. Driven by lengthy, wry, petulant, convoluted dialogue _ Higgins was an author famed for crafting realistic, wall-to-wall conversation _ the film keeps ramming home its point by inserting soundbites from television spouting all the bad news about the US, as if afraid that we wouldn't get how America is declining.

That the film has a cast of performers who can deliver Higgins' lines with mellifluous rancour is its blessing, and that's what Killing Them Softly actually means _ despite the promo image of Pitt proudly sporting a very big gun.

When three bumbling robbers bust up a poker game and disrupt the balance of the mafia ecosystem in post-Katrina New Orleans, someone needs to bring back the equilibrium.

Enter Jackie Cogan (Pitt), the fabled fixer who'll whip everyone back into line. Orbiting above and around him are Driver (Richard Jenkins), a clear stand-in for the kind of well-dressed corporate executive who's actually dealing in the shadiest businesses; Markie (Ray Liotta), a nervous mid-level hood in charge of the poker den; and Mickey (James Gandolfini), a fat mob boss near the top of the criminal food chain. Through their long-winded talks _ in cars under derelict bridges or crummy wasteland bars _ we relish the deliciousness of the dialogue and yet wonder if there's anything more than the simple analogy set up quite clearly and early in the film: Crime is business, and vice versa, and the US, under Obama or anybody else, is an aquarium of filthy fish waiting to explode. Maybe killing them less softly will be slightly more interesting.