Stoker is a lurid thriller that imagines itself, and struggles laboriously to be, something else. Come on, where's the blood? Where's the viscerality, the Hitchcockian glee, the good-old perversity? That late arrival of gore _ and such aestheticised gore, sprayed like expensive jets of perfume over dainty flowers _ almost seems disingenuous given the pedigree of the genre and the director, Park Chan-wook of Oldboy fame. 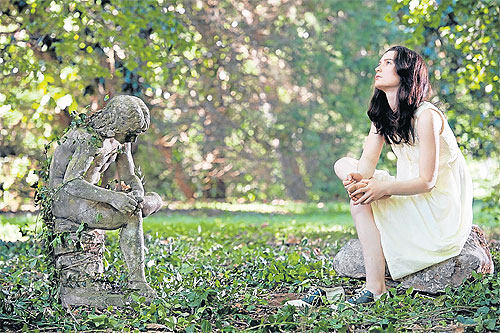 Not that I'm demanding violence: simpler, I just thought Stoker would take itself less seriously. I thought it wouldn't have tried with all its might to achieve that arthouse stuck-upness because it isn't and should never be.

Hitchcock, looming large here, was great not because he aspired to make art; it's because his florid showmanship was executed almost with a wink. Let's see what we have. A fashionably depressed teenager, India Stoker (Mia Wasikowska, who I think will have a long and bright career), recently lost her father in a freak car accident, leaving her with her estranged mother Evelyn (Nicole Kidman) in a large country house.

Enter Uncle Charlie (Matthew Goode), daddy's long-lost brother who sweeps into their lives after travelling the four corners of the world.

Dashing, bewitching, driving a convertible, Charlie has just the right amount of mystery to fascinate Evelyn, by now lonely, and to vex India, who seems to be vexed by anything anyway. Soon Charlie will vex us too, but that's not so surprising.

Director Park _ who established himself in Korean cinema and the film festival circuit with vengeance gore-fests _ has brought his Korean cinematographer with him, and together they seem to be twisting the arm of the script, milking suspense when there's none and, to a degree of success, interiorising the image as if from India's sexually frustrated view.

Wasikowska has that magnetic creep that pulls us to her, but the film is afflicted by the arthouse syndrome: it renounces its pulp roots and wishes to appear high-brow _ a pretension it can't sustain. The conceit comes apart mid-way, when the foreboding mood, which has been adequately effective so far, struggles to contain the stylistic swagger that makes less and less sense. When blood is finally drawn (pretty subdued, compared to Park's usually over-the-top standards), it seems almost perfunctory. And so, too bad, is the whole film. 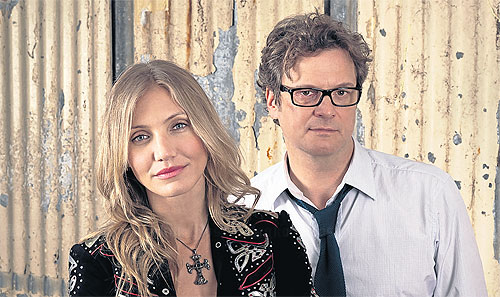 The distributors plug Gambit as a movie "written by the Coen brothers". That sounds inspiring _ for half-a-second _ before a realisation hits you that this was probably something the writer-directors of Fargo and No Country For Old Men, among other ironic noirs, might've tossed off on their vacation and deemed unworthy to direct.

In other words, maybe this is something trashed by the Coens only to be picked up and dusted off and made into a tedious caper involving a major star (who previously played a stuttering British king) in a lengthy slapstick scene wearing only underwear and a sports jacket.

Colin Firth is decidedly much better than the role and the lines he's given. Gambit also benefits from two other first-bill thesps, Alan Rickman and Cameron Diaz, and yet the theatrical prance of the former and the giggly, rodeo-babe allure of the latter can't lift this flat good-man-trying-to-be-conman charade from its own puddle.

Beginning with the Coen-esque cynical narration, the film descends into mindless buffoonery. Harry Deane (Firth) plays an art curator who enlists the help of a Texan cowgirl (Diaz) to dupe his cad of a boss (Rickman) into buying a fake Monet. Much of the film involves Firth trying to outwit Rickman, Rickman trying outsmart some Japanese, and Diaz trying to out-charm everyone dead or alive; the movie's centrepiece involving Firth running around the Savoy half-naked is a source of laughter and maybe wonderment, mostly as to why these talents are wasting their time on this.

It's so hard to be a good thief, physically and emotionally _ that's the message in most of the Coen movies. Too bad, it's also hard to make a good film about wannabe-thieves, as amply evident here.

The Oscars have been announced, but the fever is still in the air. Some of the Academy Award-winning and nominated movies are still showing in Thailand. Some of these titles have been playing for a while and screenings are limited, so check details with the cinemas again.

Les Miserables is showing at Lido, Paragon and Major Ratchayothin.

Zero Dark Thirty is on at Major Ratchayothin and EGV Seacon.

Amour is having a sneak preview at 8pm at SF World. Regular release on Mar 7.

Django Unchained comes out on Mar 14.