What doesn't kill you makes you stronger
Life
Arts & Entertainment

What doesn't kill you makes you stronger

Tarantino's slave high jinks doesn't claim historical accuracy, but ends up being the most truthful among the Oscar winners

Quentin Tarantino's Django Unchained is a happy whip, drawing as much blood as laughter. It runs on Road Runner humour, fired by cruel comedy, cartoon revenge, cracking you up and making you wince, and that balancing act has always been one of the secrets of Tarantino's brilliance. Still, this is a serious film about history and how cinema appropriates history. In a year that most Oscar-contending titles lay pompous claims to accurate retelling of the past, from Argo, Zero Dark Thirty and Lincoln, the blissful disregard of "history" somehow makes Django the most truthful film of the lot. Or at least it feels truthful in spirit, leaving the grandstanding of other filmmakers looking spurious, frivolous, or simply wrong. 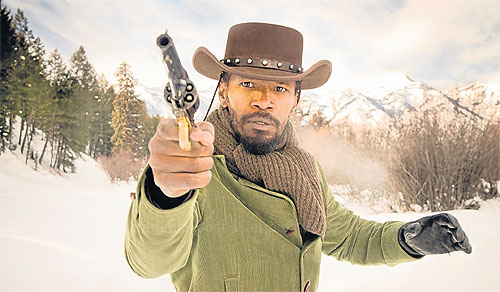 Jamie Foxx is an ex-slave on a mission in Django Unchained.

The Jews got to club the Nazis in Tarantino's Inglourious Basterds, now it's the black slaves who get to cane the white masters. Set in the pre-emancipated American South, Django Unchained could have been a prequel to Steven Spielberg's Lincoln (which opens here next Thursday), a sort of wacky brother to the headmasterish elder. In Basterds, Tarantino's half-playful, half-serious scheme to show how cinema can alter World War II history is an open conspiracy; in Django, the subversiveness is aimed at both the shameful past of the birth of the American nation and at American cinema that has long skirted the subject. The two films are often described as "revenge fantasy", and because fantasy is to look at truth from a different angle, it can sometimes hit the nail more directly in the head. It can also give us _ us being neither black nor white _ a jolly good laugh along the way.

After the vintage title sequence in homage to the 1966 Spaghetti Western film Django, we're clued into Tarantino's terrain. Shackled slave Django is being marched across the states when his masters meet one Dr King Schultz, a garrulous dentist/bounty hunter with a tendency for erudite vocabulary and, like the film itself, clear disgust against slavery. Where the slave trade deals in human lives for cash, Dr Schultz explains the gist of his profession, "a bounty hunter deals in corpses". With a cheerful smile Dr Schultz, played with relish and self-amusement by Christoph Waltz, quickly dispatches the whites and enlists Django (the coolly understated Jamie Foxx), now a free man, as his assistant in tracking down men on his Wanted Dead or Alive list. Killing white men and getting paid for it is world's greatest job for young Django, and the two set out on horseback to pursue the proto-version of the American dream.

In Waltz, Tarantino has found a man who can chew his delicious dialogue and spit it out in a rainbow of mirth and sarcasm. But before him _ back in the days of Pulp Fiction and, my favourite, Jackie Brown _ there was Samuel L. Jackson, who also shows up here in a role that intelligently underlies the complexity of the slave-master relationship. When Django and Dr Schultz travel to Candyland, a Mississippi plantation of the sadistic landowner Calvin Candie (Leonardo DiCpario), they meet Stephen (Jackson), the estate's footman-slave who grovels at the feet of his master, but who also towers over him. There are many fascinating characters in Tarantino's oeuvre, and Stephen has joined that league: stooped, bald, croaking and manipulative, his subservience speaks of the dimensions and mental mechanisms of slavery. Jackson makes Stephen an old Rottweiler and a die-hard fool, and his transformation is so startling that during the first few minutes we almost couldn't recognise him. Waltz's flamboyance overshadows Jackson's sly turn, but watch them both. I'm inclined to at least put forth the latter's name for every supporting actor award. Flamboyant and sly: those are the motors oiled by comical violence. Blood spurt and guts spilled, Tarantino knows that sensation _ somehow Japanese _ when laughter is an antidote for gore. Or for historical stupidity. One of the funniest scenes in Django is when a mob of amateur Ku Klux Klan members try to ambush Django and Dr Schultz ("the nigger lover"), but get stuck with a practical problem that I won't spoil here (I recall a scene in Jackie Brown when robbers can't find their car in a large parking lot). Writing that simple scene into a long, absurd comic sketch, Tarantino offers an acidic cure to the ignorance of, say, Birth Of A Nation, or the nonchalance of Gone With The Wind, and suggests how cinema can triumph over ugly history. As the survivors gallop off into the dark _ real and symbolic _ we giggle and shudder. We've seen one of the year's best films.

Rooney Mara is a depressed yuppie in Side Effects.

In Thailand, when you're depressed, you go to the fortune teller. In the US, you go to the shrink. Or at least for the handsome New York yuppies who populate the frigid Upper West Side of this Steven Soderbergh thriller.

Side Effects begins as a study in pharmaceutical dependency of young, glum, rich Americans in their pathetic pursuit of non-sadness, before the narrative uncoils like a woken-up viper into a cynical psycho-suspense, hissing in all directions. It's gripping throughout, despite the near-overstretch of the final reel.

The script by Scott Z. Burns is deliciously sinuous. And Soderbergh's tone of frustrating cool plays nicely with our shifting attitudes towards each character. Rooney Mara, as pretty as a wounded bird can be, plays Emily, the young wife of a stock trader (Channing Tatum) who just got out of jail for a Wall Street-related crime. Emily is depressed and drives her car into a wall, which doesn't really help, and she begins therapy with Dr Jon Banks (Jude Law), a British psychiatrist who's moved to New York because urban sadness is more prevalent on that side of the Atlantic. Dr Banks, after consulting with Emily's previous doctor (played by Catherine Zeta-Jones), starts prescribing antidepressant drugs to the young woman, but the side effects of the happy pills grow worse _ from nausea to sleepwalking to something much darker.

Soderbergh's Contagion (2010) is a spry medical thriller, and the crossroads between biology and judiciary, between artificial happiness and genuine anxiety (or the other way round) are the platform of Side Effects. The director's sly handling of the four main characters is admirable, and even though the unravelling of the plot requires great complicity from us, the film has a confidence that sweeps us along. Soderbergh has vowed that this is his last film _ tired of cinema, he wants to move on _ but seeing how he makes old things new, how he makes scenes hum with invisible tremor, and how his modernist-like vision of edgy gracefulness still works, we only wish he'll soon change his mind. 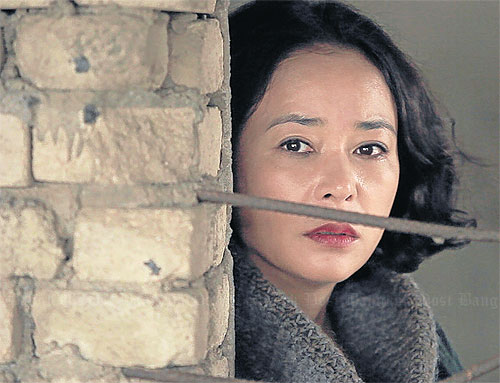 Shock value is no surprise

Alas, Kim Ki-duk. The South Korean auteur's movies have amassed an international fanbase in the past decade through an appearance _ a veneer, skin-deep _ of spiritual radicalism and violent redemption. A fish hook in a vagina in The Isle, or a dirty old man waiting anxiously to deflower a teenage girl in The Bow, or a self-portrait documentary about Kim getting suicidally angry with Kim in Arirang. Many see it as deep. I see it as hogwash. That Pieta, Kim's latest film, won one of the world's most prestigious film prizes in Venice last September became one of the greatest mysteries of modern cinema. It's simply one of the worst jury decisions ever.

Pieta is obvious in its design to shock and sensationalise as its title conspicuously refers to Michaelangelo's sculpture. Whatever. Kim's dishes of sadism wouldn't have been so off-putting had they not been so manufactured. Here we have Gang-do, a vicious torturer (not unusual for any of Kim's servings) who amputates, cripples and beats up poor people and forces them to claim insurance money. One day a middle-age woman appears, claiming to be the mother who abandoned Gang-do decades ago. True to form, the director proceeds to have Gang-do rape the woman. An incestuous rape! How brave! And the two begin a strange relationship that leads to the final moment that would supposedly make us gasp in horror, only that it merely shows how crude the moralism of the whole film is.

It's agonising to watch the two lead performers going deep into the sludge: Lee Jung-jin and Cho Min-soo are dedicated actors given to a story of one-note perversity. Pieta adds up to the catalogue of Kim Ki-duk's shallow, transparent attempt to milk transcendental humanism from the unlikeliest of situations. It's the opposite, for humanity is only exploited to the benefit of an ''art-house'' sham.