Lessons amid the fun

I was unfortunate to have caught a cold just a few days before the long Songkran holidays started. But that didn't stop me from having a good time; I managed to get myself drenched and enjoyed the festival with friends, even if just for a day. (Thai belief has it that if you don't get wet during Songkran, you'll be jinxed for the rest of the year; I was determined to escape that fate!) 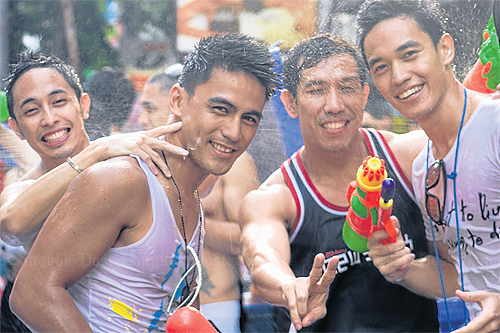 Even if your gaydar is still on the amateur level, you could tell that Bangkok was full gay visitors who flew in from all over the world especially to join in the Songkran holidays. It is the time of the year to enjoy the merry-making and show it off on Facebook, particularly when they joined the water war on Silom Road.

I am so thankful to all my LGBT fellows from around the world who came to Bangkok and spent a huge amount of money in the city, and we hope you returned home with unforgettable memories.

Most of my friends and acquaintances stayed at big-name hotels in Bangkok. So any hotel that positions itself as gay-friendly is doing the right thing for its business.

We constantly hear a lot of comments from conservatives about how they fear that foreigners will come and destroy our beautiful culture. But it was my friend from Taiwan who taught me a lesson about my own culture.

"What does Songkran mean?" was the question I got early in the morning one day during the Songkran holidays. I went silent for a long moment, because the only answer I could think of was: "It is what we call our New Year." Of course, this generic explanation is not what he was asking for.

This prompted me to do some research and soul-searching. Finally I replied to my friend that the word "Songkran" means stepping forward, as the New Year is a time to move towards a better and brighter future. When I had a chance to meet up with my Thai friends later, I asked them the same question and none of them knew the answer. At least I wasn't the only one.

After his first question, he sent me a picture of a Buddha statue with a bowl of water placed nearby. He then asked: "How many times should I pour the water on the statue? Can I pour on the head part or should I avoid that part?" He got me speechless again. But thanks to him, I got to learn more about my own culture.

The holidays may be over but our lives go on. New Year is when we look back to lessons learned and look forward for something better. As the writer of this column, I hope this year will bring a better understanding of gender diversity issues and human rights. Happy New Year!