Lee Kuan Yew serves up controversial views on China, the US and radical Islam

If you follow Southeast Asian politics, you will find yourself paying extra attention to Lee Kuan Yew. 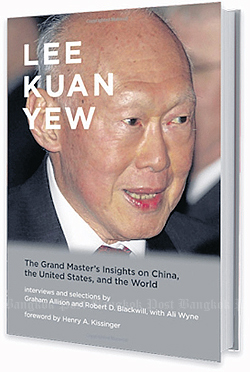 Lee Kuan Yew: The Grand Master’s Insights On China, The United States, And The World

This is not only because Lee is a highly respected politician who lead Singapore from third-world to first-world status. He is also a critic, one who is fearless in arguing against or even mocking what he disagrees with. (He was once quoted in 2011 by WikiLeaks calling Islam a "venomous religion" _ a statement Lee vehemently denied).

Lee Kuan Yew: The Grand Master's Insights On China, The United States, And The World is an anthology of selected interviews and speeches Lee has given over the past four decades.

The book is divided into eight themes _ mainly the geopolitics between China and the US, the future of India, Islamic extremism, and the future of democracy.

The world according to Lee is full of promise, which can become reality thanks to technological innovation and the free market. It is also a world full of chaos and potential anarchy caused by the clash between ideology and pragmatism.

As an authoritative commentator on the relationship between China and the US, Lee has been known to have acted as a consultant for leaders from Richard Nixon to Barack Obama on one side of the Pacific Ocean, and from Deng Xiaoping to Xi Jinping on the other.

Lee does not believe the two countries will go to war because China does not pursue any ideological agenda.

The US needs a peaceful China to ensure world stability, and US trade and investment, while China still wants to access to the US market. "Both are competitors, not adversaries."

Yet Lee warns against the West's imposing on China universal values _ pressing the issue on democracy and human rights might force the government to take a hostile position. "China has to be persuaded that the US does not want to break up China before China becomes more open to discussing questions of world security and stability."

A descendant of a Chinese immigrant, Lee understands the mindset of the world's most populous country.

"China wants to be China and to be accepted as such, not to be seen as an honorary member of the West."

Lee has great faith in the People's Republic and predicts it will outperform the US in terms of economics, but never on creativity and innovation.

China has its own problems. The complexity of the Mandarin language will prevent the country from attracting foreign talent. It is also impossible for China to control the rest of Asia the way it did for centuries when it had an empire of vessel states.

At first glance, the book strikes you as a serious academic work. But after reading a good 20 pages, readers will be mesmerised by Lee's lucidity and entertained by his acerbic tongue. After all, he is a good critic because he is not wholly shaped by ideology, nor does he try to be politically correct.

For example, despite a glowing admiration for America, Lee has unique take on the superpower.

"Americans prosper not because of universal ideology but because of geopolitical good fortune, resource energy, generous flows of capital, and technological flow from Europe."

Lee looks at modern political campaigns in the US with scepticism, warning the country may fall victim to populism because leaders follow opinion polls. "A spin doctor is a high-income professional, one in great demand. From such a process, I doubt if a Churchill, a Roosevelt, or a de Gaulle can emerge," he says.

His view on radical Islamism is controversial. Lee envisages a radical plan to establish a worldwide Islamic state by distorting the religion's teachings. "Muslims want to assimilate us. It is one-way traffic. They have no confidence in allowing choice. Islam is exclusive."

His opinion on India is interesting. Once a true believer in India's potential, Lee became disillusioned when Indira Gandhi failed to abolish the caste system. For him, India's ethnic and language diversity, poor logistics and archaic bureaucracy prevents the country from maximising its abundant potential. Lee describes India as having an "unfulfilled greatness".

This book is sure to upset human right activists. Lee's advocacy of authoritarianism and his contempt towards freedom of the press and democracy will only inspire hardline governments. The question is whether these authoritarian leaders can do for their countries what Lee did to Singapore _ now known as merit-based society with almost corruption-free government.

The final chapter, "How Lee Kuan Yew Thinks", reveals the human side of this formidable man and is a must-read.

Unlike many leaders, Lee is proud of his pragmatism. A public enemy of democracy, his view on the Chinese government's reaction to the 1989 Tiananmen Square protest is shocking. "I understood Deng Xiaoping when he said: if 200,000 students have to be shot, shoot them, because the alternative is China in chaos for another 100 years."

But Lee is highly interesting because of his self-contradicting character. Never one to believe people are born equal, he repeatedly pours scorn on the caste system and feudal societies that award people based on birth rights, not merit.

"People are not born equal, but they must be given equal opportunity to compete under fair, transparent rules, with respected referees." He abhors the socialist welfare style as it runs counter to a system of incentives and rewards. He warns the US will decline if it follows Europe's model of social welfare.

In all, this book is a good read not only for students of politics, but also for readers interested in strategic thinking.

Right-wing activists and liberal thinkers alike should read this book because gifted authoritarian figures such as Lee are increasingly rare.

Lee, the Sage of Singapore, will turn 90 in September. Many of his views seem medieval, especially in terms of human rights. But readers will soon know that Lee Kuan Yew does not care much about what other people think. After all, he says: "I always try to be correct, not politically correct."