On the walls in Mandalay
Life
Arts & Entertainment

On the walls in Mandalay

Evidence of Ayutthaya culture still exists in the temples of Myanmar

More than two centuries after Ayutthaya villagers were captured by the Burmese and taken to Mandalay, some artistic traits are still evident in the township of Amarapura. But don't expect to find traditional Thai stilt houses from the period dotting Amarapura streets or Ayutthaya's narrow chedi abounding in Myanmar temples. 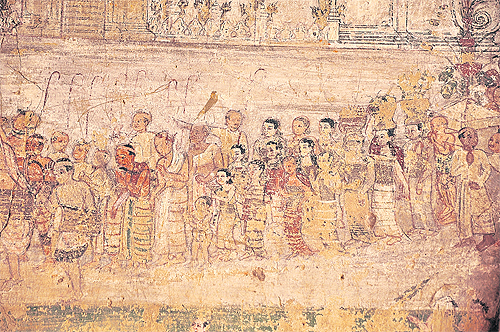 This mural at the east gate of Kyauk Taw Kyi Temple depicts a lady in the middle of the picture who looks different from the Burmese women because her skirt doesn’t cover the ankles.

Instead, traces of Thai influence are more subtly displayed. They can be found in temple murals, where signs of the captives known as Yodia can be found.

"The Yodia were the captives so it wasn't possible to build a historical statue or religious venue while they were residing in a foreign land," said expert archaeologist Patipat Pumpongpaet.

Patipat was in Amarapura with a group of independent architects to verify royal relics of King Uthumporn in March. The project aims to publish three books by the end of next year. The first will revise the history of King Uthumporn based on new discoveries, and oral and written Myanmar history. The second will be about the places and temples where the king resided until he passed away in 1796. The last will feature artistic and cultural heritage that has been influenced by Ayutthaya traditions.

He explained the Yodia _ which is how the Burmese referred to Ayutthaya captives back then _ had to give up their style of stilt houses, lifestyle and cuisine to adapt to the new country.

"The Ayutthaya traits had to be subtly shown in the mural paintings or architectural details in the religious places," said Patipat. All the temples and monasteries were built in Myanmar style.

According to the Myanmar chronicles Parabike, about 30,000 villagers were captured along with King Uthumporn when Ayutthaya fell to Myanmar in 1767. They were taken to Innwa, about 20km outside Mandalay, where they were allowed to build their community. More captives were later taken to reside near Yethaphan Kyaung temple.

King Uthumporn, better known as Chao Fah Dok Maduea, was believed to have resided initially at Maha Thein-dawgyi monastery and then at Yethaphan Kyaung temple, before being moved to Paung Le Taik temple where he remained a revered monk until he passed away. The four temples are located within a 20km radius of each other. 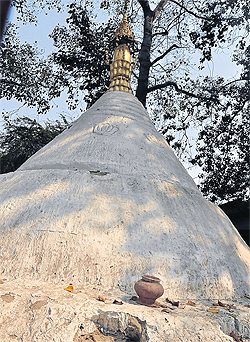 A sand pagoda near a waterway once used by the Yodia people in Mandalay.

Because of the large number of captives, many believe the temples and monasteries where King Uthumporn resided were influenced by Ayutthaya art. These places are believed to have been built before the Yodia were captured, but some were later renovated, and traces of their existence remain to this day. Among the religious sites is Kyauk Taw Kyi Temple, which despite its conventional Myanmar architectural style features outstanding Ayutthaya-influenced mural paintings at its four gates. The paintings are believed to have been created by Yodia people who were taken to Myanmar in 1767. The temple is located near the famous U-Bein wooden Bridge and Taungthaman Lake.

At the same gate, a boy most likely of Thai descent is seen carrying baskets with a cradle over his shoulders, while the Burmese are carrying items on their heads. A chedi is also believed to be painted in Ayutthaya style, the evidence for which is its unusually narrow width. The width and height of a Myanmar-style chedi is usually equal.

Entering the South Gate, there is an image of a group of boys, believed to be Yodia descendants because of their hairstyle, playing on the grounds.

Located in Sagaing, across the Salween River from Amarapura, Maha Theindawgyi Monastery also features Ayutthaya artistic details on the mural paintings inside the ubosot. Apart from the main image of Buddha on the wall, Patipat said the decorative elements including squirrels playing with flowers were favourite patterns among Ayutthaya artists. "Thai artists had a sense of humour." He added that the bussabok, or Buddha's throne, featured on the wall is similar to that in Wat Choeng Tha in Ayutthaya, while the pha-thip, a decorative fabric hanging from the throne, is similar to that in Wat Chaiwattanaram and Wat Mongkol Bophit, both in Ayutthaya.

Yethaphan Kyaung Temple, located near Innwa, was the first temple where the king resided. Only a wooden frame around a wooden Buddha image kept in the temple grounds now reveals any link with Ayutthaya. The frame features a kanok pattern, one of the most famous Thai decorative elements.

Paung Le Taik temple is the last place the king resided. However, its location in Mandalay has made it difficult for historical Thai traits to survive.

A village nearby is believed to be where the Yodia captives were placed, and there is evidence for this in the form of sand pagodas, or Thepone Ceti, located near the irrigation canal that was once the waterway for the Yodia people in Mandalay.

Patipat said the sand pagodas are among the few historical sites left that demonstrate that Buddhists would carry sand back to the temple grounds, a custom based on worshippers replacing what was taken away by their feet when they left.

However, Patipat was aware that the sands of time had eroded much of the evidence of the Yodia's influence, and he was circumspect about what could be found in modern-day Myanmar. "You can't expect things to remain. What could be moved would have been gone." 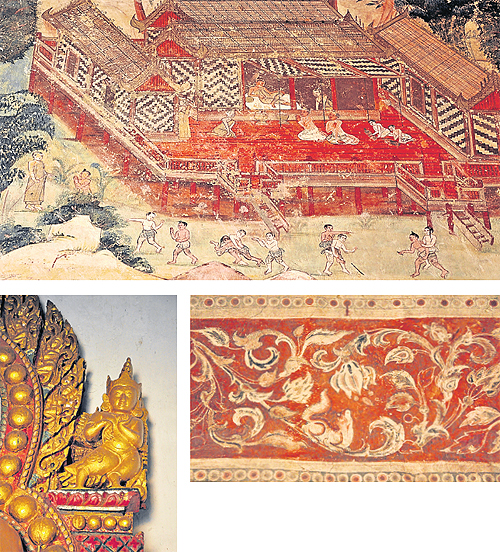 Squirrels play with flowers on Maha Theindawgyi Monastery’s mural, one of the favourite patterns by Ayutthaya artists.

A group of boys are depicted playing together in the mural at the South Gate of Kyauk Taw Kyi Temple. The boys are believed to be Yodia descendants because of their hairstyle.