Dancing up a storm

Recently in town to promote their latest project, Germany's Flying Steps crew continues to push the boundaries of breakdancing

For the past 20 years, the Flying Steps crew has been at the forefront of break-dancing culture. Respected worldwide and even more so in their native Germany, the entire gang of this award-winning B-boy collective was recently in Bangkok to perform as a part of a Red Bull launch. 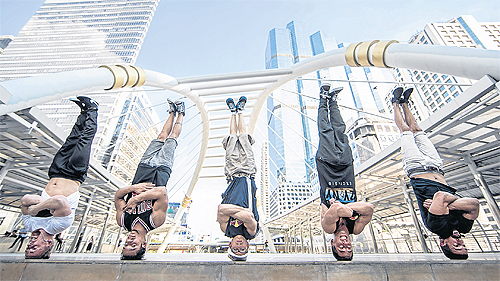 "It's our first time here. It's really special. We've been working with Red Bull for 13 years now. We're here to represent breakdancing," said Vartan Bassil, one of Flying Steps' founders.

The crew's latest major project, "Red Bull Flying Bach", has been touring the world _ selling more than 200,000 tickets so far _ and shown at the likes of the Eurovision Song Contest and the Federal Presidency's Summer Festival.

"We want to show how artful breakdancing is, and we chose classical music to get the sense of high culture. It's one of the biggest things we've ever done. People have told us that it's unbelievable how nicely breakdancing works with classical music," Bassil said.

Bassil, the team's choreographer, started the Flying Steps in 1993 with Kadir Memis, after he fell in love with Michael Jackson's fluid movements, which had him rewinding his VHS tapes over and over to mimic the late King of Pop's steps.

"He was my big inspiration. Back then, there were no hip hop dance classes, so you had to learn everything from the TV by yourself. Then hip hop style came, and I saw a movie about breakdancing. I started to practice every day. Then I decided to become a professional dancer. I told myself it was what I wanted to do with my life," he said.

Flying Steps was born out of love for breaking and a strong sense of community. The absence of technology might have derailed the growth, but a tight-knit bond was forged since its formation _ something that the Flying Steps still strongly retains even with the ongoing success.

''Back in the day, there was no internet. You just had your TV and VHS tapes. So it was important for us to travel in order to see things that kids now can see on YouTube. For us, it was travelling around Europe to be a part of big jams and dance parties, learning new moves. Then you got inspired when you got back home, you started to be more creative with your dancing. Now it's more than easy, as young people can see everything on the internet, and they can start copying,'' said Bassil. ''Sadly, the jam culture is over now. But there are more competitions now.''

''Today, everybody can learn new things very fast, but you need to develop your individual character in your dancing also. There are many good dancers now, but not enough characters,'' added Benny Kimoto, a core member of Flying Steps.

To say that the Flying Steps have come a long way would be an understatement. They're not just your regular breakdancing crew who perform when needed. They run a company which handles a dance academy, show production, talent scouts, workshops and mentorship programmes in addition to their repeated wins in the world's best breaking battles.

Bassil said he's witnessed how breaking had grown over the span of 20 years, and appreciates how the public is more familiarised with breakdancing, which started on the streets, but has now moved into the mainstream dance domain.

''It is now certainly more accepted than it once was. Breakdancing is featured everywhere. Now people understand that what we do is also an art form as well as a sport. It takes a lot of practice, a lot of work and a lot of heart. Breakdancing is definitely here to stay,'' said Bassil.

The seasoned dancer's words ring true especially in the popular music world. Stars of the biggest wattage such as Madonna, Lady Gaga and Rihanna have been using B-boys and B-girls prominently in their shows _ a practice that Bassil and Kimoto take in their stride.

''Two of Flying Steps dancers were on tour with Madonna. People understand what we do is high level. The big stars will always be interested in working with all kinds of the best dancers, and also as dancers, you're interested to see the world and how the big stars operate. But in the end, you come back home after the world tour, and you have to find new challenges for yourself. You can't just stop,'' said Bassil.

Besides being part of the lucrative kingdoms of various pop stars, break-dancers have become more visible in reality dance contests where they are always thrown in the mix.

''I don't feel that it's really real. They are not really concentrating on the dancing, but more on life stories. There are always background stories in this kind of show,'' he said. ''Yeah, it's more about selling dramas to get more viewers, and most of the time the judges don't know much about dancing, but they are famous,'' said Kimoto. ''In the end, the quality of the dancing is not as high as it should be. People who go on TV shows, sometimes they do it to get fame, they don't do it from the heart. For me, the best thing for an artist is to get to the high level by your ability, and then people will want to have you on TV.

''On the other hand, reality dancing contests are a good thing because they make the dance scene bigger and more commercial. But I'd like to see real judges who know about dancing on the shows, and the dancers should be judged on their skills not their stories or how good looking they are. It should always be about dancing.''

What if one of your young students wanted to try out for such shows?

''For beginners or people who are not at a high level, it's a good start. It's important to see what you can do, and find your way. There are many different levels of competitions and you should find one that fits your ability,'' said Bassil.

As old hands on the breakdancing scene, Bassil and Kimoto have done plenty of judging themselves, and they both agree that they don't often look for one particular strong criteria. In their opinion, Asian B-boys are the most technical and have the most discipline, the Americans are more creative and fun, while their European counterparts mix both aspects together.

''There are so many things we look at when we judge competitions. For me, I look for complete, well-rounded dancers, and for musicality, foundations, techniques and creativity among other aspects. You can't just do the acrobatic stuff,'' said Kimoto.

''It's not so easy to judge, but we're lucky that we've been around for a long time so we have an eye for it,'' Bassil said.

Still, for the Flying Steps, breakdancing is not just about competitiveness. As a cardinal rule, Bassil will never encourage anyone under his mentorship to give up dancing, even with limited skills.

''The first thing is that if they have fun dancing, then there's no need to change them, or tell them to stop. We try to help and support them as much as we can. I think everybody knows his/her limit. We always tell our kids that it's important to concentrate on school first, and when they finish school, then they can start thinking about becoming professional dancers. It's a long, long way. You know, there are some talented people, and they don't want to be professional dancers. You can't force them to become one,'' he said. Bassil and Kimoto insist that the Flying Steps crew is still pushing the boundaries of breakdancing in the hope that their art is perceived with the same prestige as, say, ballet. It's their life-long mission.

''A lot of people used to ask why I wanted to dance for a living. All I can say to the aspiring dancers out there is believe in yourself and your dreams. Focus on your goal,'' said Bassil.

''Work harder than anyone else,'' said Kimoto. ''Ten times harder.'' 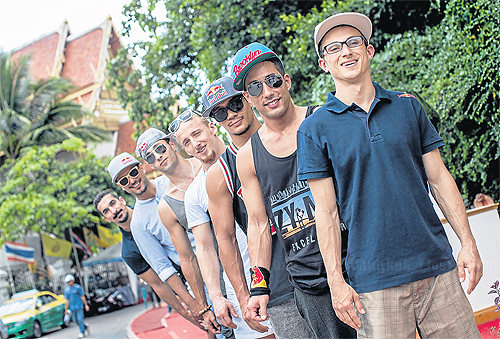