Superstar Jennifer Lopez reveals her 'Jenny from the block' side, and her secrets to juggling many roles

Everything about singer Jennifer Lopez screams sexiness: her eyes, her hair, her curves, her honey-coloured skin and her infectious giggle. The dancing diva is bringing sexy back with her latest dance single Live It Up featuring Pitbull, which was premiered worldwide last month. 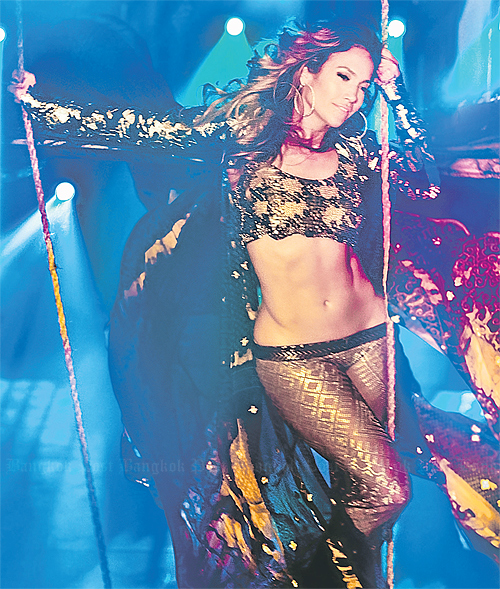 Lopez, or J.Lo to her fans, is set to release her eighth studio album later this year under Moroccan-born producer RedOne's label, 2101. He has also been behind the success of pop stars from Lady Gaga to Nicki Minaj.

Wearing a different hat to her usual actress, singer and mother-of-two roles, earlier this year Lopez produced The Fosters, a new TV drama series on the ABC Family channel in the US, which tells the story of an interracial lesbian couple and their adopted children.

Last year, the closest Thai fans could get to Lopez was Singapore, where she performed a concert during her "Dance Again World Tour".

In an email, the 44-year-old singer tells us about her music, inspiration and what makes her so stylish.

What was it like working with RedOne and Pitbull again?

I love working with Red and Pitbull. I think we have a really great chemistry. I think people were like, 'Why did you do another single with them?', but we don't plan it that way. We just make music, then the record company goes, 'Lets put it out right now!'.

Besides dance tracks such as Live It Up, what other musical elements will we find on your upcoming album? I think it's going to have what all my albums have, which is there's always an R&B/hip-hop influence, which I like to call my 'Jenny from the block' side, which is from my Bronx upbringing. Then you have the dance and you have the pop and you always have a bit of Latin influence and that's what makes up my musical style. I kind of bounce between those genres and mix them in a certain way; thank God it's all believable to my fans! So it's going to have everything that people expect from me.

You have a Dance Again World Tour 3D film coming out. Can you tell us about that?

I'm really excited about this, and a little scared! I love how we filmed the tour, since it's my first world tour ever, and we filmed it in 3D and it looks amazing _ it's a lot of fun. It was a great show and I'm proud of that. But we also did this documentary where it was my first world tour, I had just gone through a divorce and I was a single mum going on the road with two babies. Like the song says, I was kind of learning to dance again, both metaphorically and physically at the same time. That's the scary part.

You are a role model for so many women since you are such a successful mother and entertainer. What kind of wisdom can you pass on to other women?

I don't think of myself in that way. At the end of the day I just try to be the best person I can be every day _ do my best work and be the best mum and just strive for that... And keep my feet on the ground and try to achieve a balance in my life [with] work and play and mothering _ all of it. That's what all women have to do. We're multi-taskers and we juggle a lot and we take on a lot. I'm no different in that sense than any other woman in the world. [I] just try to do it with a lot of grace and integrity.

You never fail to impress the world with your beauty and style. What is your secret?

I don't have a secret style or secrets to style. It's just a thing that I like. I like being modern. I don't like things dated or things that feel dated. But I do like classic, modern, sexy, and feminine; that's really my style.