Often, movies designed to inspire dread end up worse: dreadful. Fright becomes an urge to flight, and "horror" seeps like poisonous rays from the screen and becomes descriptive not of the genre but of the ongoing experience while remaining seated in that dark coffin of a cinema. Horrible is more like it. 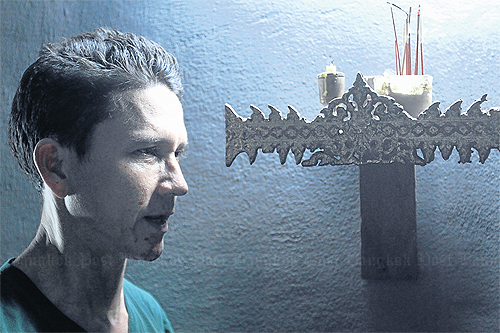 Defenders of Long Jam Nam (Pawn Shop) will have to twist the Earth's axis, and yet they'll still only come up with empty terms like "surrealism", "dark" and the "challenging" style; the postmodern universe has given us many things, useful and useless, including the belief that to support terrible movies is a mark of intellectual prowess. That may be the case with some films, but certainly not here: there are worse films than Pawn Shop, though not many, and not much worse.

More or less, the story is about a pawnbroker who lures cash-strapped customers to pawn their souls to the devil. More or less, Krissada Sukosol Clapp _ a smart man who has no place in this dumb flick _ plays a husband who subjects himself to the pawnbroker's demonic deal and is sucked into a nightmare, or a warped dimension, or a discarded Stephen King manuscript, or just a badly-lit set with a woman trying so ridiculously hard to look scary.

"More or less" _ I stress that because obscurity isn't a virtue in this embarrassing film that tries to compensate narrative stupidity with morbid lighting. But low-key lighting isn't the only thing that makes movies scary _ watch The Shining, in which the scariest scene is lit up like a New Year's party.

What makes a horror film works, for me, is a precise rhythm, psychological context, and most of all, the conviction of the filmmaker. None is present here.

Giving us a mix of overreaction, feigned autism and mocked misery, Krissada, usually an electric presence that hovers one level above his movies, tries in vain to spark up the drab material in which he's found himself. For all the compliments that Thailand is a hothouse of horror films (mainly because we think about horror so much), Pawn Shop is a reminder that for every good ghost story, there are a dozen horrible ones flaunting their horrible-ness out there.