To celebrate HM the Queen's birthday this month, prolific composer Somtow Sucharitkul will present Suriyothai, a performance in the form of "music drama in movement and song" based on an episode of 16th century Siamese history. 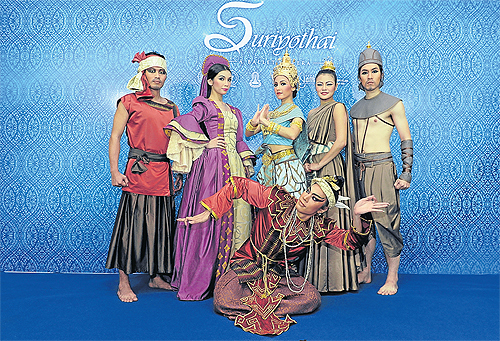 Somtow's special creations in honour of the Thai Royal House have been international successes in the past year. The Requiem For The Mother Of Songs for the late HRH Princess Galyani Vadhana and The Silent Prince in honour of HM the King both played to full houses at the Thailand Cultural Centre and have been seen throughout the world via the internet.

Suriyothai is a new work, with the aim of pioneering an art form that uses both dance and song to celebrate the famous Thai warrior queen of the title.

Set during the time of the Ayutthaya kingdom, Suriyothai combines Thai and European styles of dance of singing and to fashion a new "fusion" art form.

Composer-director Somtow said "narrative ballet" telling an entire story in dance has been moribund since the great days of the Ballets Russes, a hundred years ago. To revive the form, Somtow asked choreographer Puwarate Wongatichat (operas Mae Naak, Otello, The Silent Prince and musical Reya-The Musical) to create a hybrid style that contains elements of modern and Thai dance.

The designer of the show, Dean Shibuya, is the former artistic director of the San Francisco Lyric Opera and most recently designed Opera Siam's productions of Otello and The Silent Prince as well as Madama Butterfly, the design of which was subsequently taken to the Savonlinna Festival in Finland.

The show opens on Aug 23 with a special gala and is followed by two matinees and two evening performances on the 24th and 25th. The venue is Thailand Cultural Centre's main hall. Tickets cost 3,000 and 2,000 baht, available now at the thaiticketmajor.com website.