Thai political leaders don't write memoirs, so Abhisit Vejjajiva's account of events from his appointment as prime minister in December 2008 to the end of the red-shirt demonstration on April 20, 2010 is path-breaking. Abhisit explains that he wrote this memoir because red shirts have made political capital by claiming that government forces killed protesters in a brutal crackdown, so he needs to set the record straight: "We have heard plenty of lies _ I now ask for the opportunity to tell the truth." 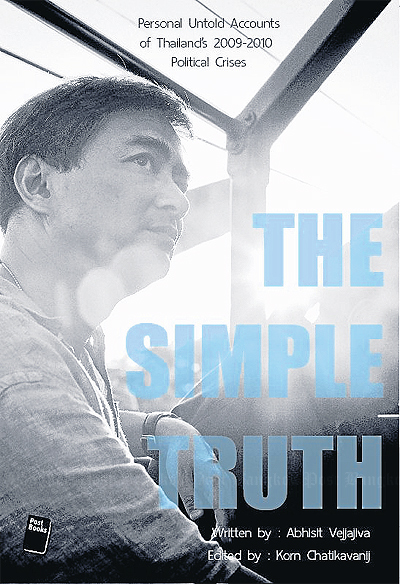 It is a dramatic and bloody tale. On his first day as prime minister, his car is attacked. Jumping forward five months to Pattaya, his car is again smashed when waiting at a red light. A week later Abhisit's car is again attacked in the Ministry of Interior compound, but the driver escapes in the style of a US cop series by ramming through the gates.

The red shirts topple the Asean Summit, and then plan to create chaos in Bangkok, but the government thwarts them. As a result the red shirts "realised that to create even greater chaos, they had to add weapons". They were now "preparing to wage a war".

We leap forward a year. The red shirts mass in Bangkok "concurrently with acts of terrorism, which were becoming daily occurrences in the city". The government tries to negotiate peace on live television, but the other side is not interested. On April 10, the black shirts kill soldiers at Kok Wua intersection. "

[I]t was now impossible to deny the truth: there were armed guerillas within the red-shirt movement." The red shirts were "waging guerilla warfare complete with organised terrorism", and "wanted the country to become a failed state". Abhisit cries all night over the incident.

He tries to stop the demonstration moving to Ratchaprasong as it would be "a strategic win" for the protesters, but nobody seems to understand or obey. Abhisit offers another peace plan, based on an election at year's end, but nobody is listening. He asks demonstrators to dismantle barricades on Rama IV Road but learns later that they refused because it was "a sniper's hideout where weapons were kept".

On April 12, "suddenly guerilla forces started to attack soldiers... stationary peacekeeping forces were attacked. And when they defended themselves, people died". The government learns that "armed rebels had taken position around Lumpini Park". Seh Daeng is killed but Abhisit has no idea who did it and suggests the bullet came from "a sniper in a high-rise across Rama IV Road".

From here on there are "vicious attacks on military checkpoints". The government decides to clear Lumpini Park which is "strewn with weapons". Abhisit insists there was no intention to inflict a "crackdown" on the Ratchaprasong camp, and the army halted after the park was secured. "Protesters launched grenades and shot firearms _ bullets were flying everywhere."

Then the burning started, "fire engulfed downtown Bangkok" and "chaos and anarchy reigned all over the country". Red-shirt leaders had earlier identified the targeted buildings from the protest stage. Abhisit asks rhetorically, "does it make any sense for the government to burn department stores so the wives of red-shirt leaders could plunder them for jewellery?"

The book first appeared in Thai last October as Truth Has No Colour, but has been retitled in English as The Simple Truth. But truth is rarely simple. Take the account of the ending of the protests in 2009. Abhisit first tells us that the protesters dispersed after government "exerted more pressure on the rallies". A few pages later he writes that the protesters melted away after people turned against them because of two deaths in Nang Loeng. These accounts simply leave out a massive military operation lasting from pre-dawn to dusk, with tear-gas, water cannons, and almost constant firing. That seems strange.

As for the killings at Wat Pathum, Abhisit claims it is "unfair and illogical... downright preposterous" to blame them on soldiers. Although the temple had been designated a safe haven for women and children, male protesters had also entered the temple "perhaps even with arms and other weapons". Abhisit suggests the deaths in the temple were caused by the same "armed militia", meaning the black shirts. By a mixture of strange logic, innuendo, and unsubstantiated assertion, Abhisit absolves the military of any guilt.

In the summing up he says, "I saw everything that happened, and I can confidently say that the true murderers were the same people who had earlier unleashed terror on our city." But of course he did not see everything. A writer who claims the moral high ground, promising "The plain truth; the earnest truth; and the unwavering truth", needs to be very careful, especially when so much photography, video, and testimony from these events is in the public domain. A claim that "chaos and anarchy reigned all over the country" rather overstates four cases of arson. Exaggeration does not persuade but undermines credibility.

Someone who read this book with no prior knowledge of the 2010 events would imagine the army suffered heavy casualties from weeks of "terrorism", "vicious attacks", and "bullets flying everywhere". In truth, military casualties did not reach double figures, and deaths of protesters were 10 times as many. Among the many illustrations in the book, several show red shirts holding crude weapons, but there is not a single picture of a soldier visibly holding a gun.

Apart from the issue of what happened in these troubled times, there is the question of what they were all about. Abhisit's explanation is again simple: after the court seized 46 billion baht of his assets, Thaksin Shinawatra set out to cause chaos. The people who joined the demonstrations were "victims of manipulation", subject to "indoctrination of misinformation and lies" resulting in them becoming "no less than enemies of Thailand". The hundreds of thousands of protesters scarcely appear in Abhisit's story because such pawns are beneath consideration.

The Democrat faithful will enjoy this book, but it is hard to see it appealing to others. It offers no new information that is attested and reliable. The self-righteousness makes it hard to imagine Abhisit acting as a force for peace and unity in Thai politics. That is not because he could never bring himself to shake Thaksin's hand ("in my entire life, I have exchanged barely 10 sentences with the man"), but because he shows so little respect for the people who took part in the protests for reasons they felt were valid and good.

Abhisit clearly had a terrible time. His life was repeatedly threatened and his promising political career may have been destroyed. He deserves our sympathy. But if you don't understand the present, can you own the future?