Of desire and dislocation

Kornkrit Jianpinidnan's eclectic melancholia shows no sign of letting up

As one of the most respected photographers of recent times, Kornkrit Jianpinidnan moves seamlessly between the worlds of fashion and commercial and fine art. Even though of late Kornkrit has been channelling his talent towards fine art photography, video works and installation art, it was his signature thoughtfulness and poetic intensity depicted in the realm of fashion that helped propel him to the forefront.

When he hopped over to the fine arts field, Kornkrit brought with him stylistic intakes and subtle attention to detail. His latest major exhibition "Elsewhere Begins Here And Vice-Versa", at H Gallery's spaces in Bangkok and Chiang Mai, is another testament to his vast undertakings. In Bangkok, the exhibition displays an installation of photography, collage and drawings, while Chiang Mai's H Gallery houses video installations and photography.

The title of the exhibition derives from Paul Virilio's essay on cities. "Elsewhere Begins Here And Vice-Versa" questions the subjects of desire and dislocation through photographic manipulation as well as found images. Almost automatically associated with Kornkrit's body of works, desire has always been consciously, unconsciously and subconsciously integral to his subliminal messages. This time around Kornkrit speaks of desire through flashes of images, lurking in the shadows and emanating the strongest sense of melancholia.

Dislocation and memories smoulder vaguely, but never too evident. Born in Chiang Rai, and having grown up in Chiang Mai, Kornkrit knows first-hand how memories can be severed or reserved, and he has learned from experience about dislocation when he moved to Bangkok after graduation. But never once in "Elsewhere Begins Here And Vice-Versa" does he engage in a direct conversation with the audience, choosing to hide his motifs, possibly in an attempt to elicit an examination of the state of desire and a touch of fear itself.

Kornkrit's Bangkok exhibition boasts the photographer's layered thought process and how the space interplay becomes a part of a hidden message that speaks through emotional complications, which end in lingering, uncloaked manners.

The first set of photographs upon entering Kornkrit's space is Yumeji's Theme, which was shot at the Bangkok location of the film In The Mood For Love _ the colonial buildings on Charoen Krung. Hauntingly beautiful, it is almost a homage to the film's director, Wong Kar-wai, and his aesthetics of slow-burning melancholia that both artists seem to have mastered.

On the next wall is a collage of found images mixed with his own snapshots. Each image differs in size and topic, but as a whole speaks of more carnal desires. Kornkrit has asked friends to take photos of sites that are personally significant to them, and later removed people from those photos without leaving any trace of the humans who were once there. He succeeds in invoking eerie feelings of emptiness and impermanence. The centrepiece is of a waterfall where Kornkrit's own body can be faintly seen, like a ghost.

"Elsewhere Begins Here And Vice-Versa" doesn't thrive on loud statements or clear frustrations, but is instead intent on trying to assimilate a sense of belonging with a strong urge of dark desires, leaving trails of loneliness and self-acceptance behind.

"Elsewhere Begins Here And Vice-Versa" runs from today until Oct 27 at H Gallery Bangkok and Chiang Mai. The Bangkok exhibition is open 10am to 6pm except Tuesdays by appointment or by chance. 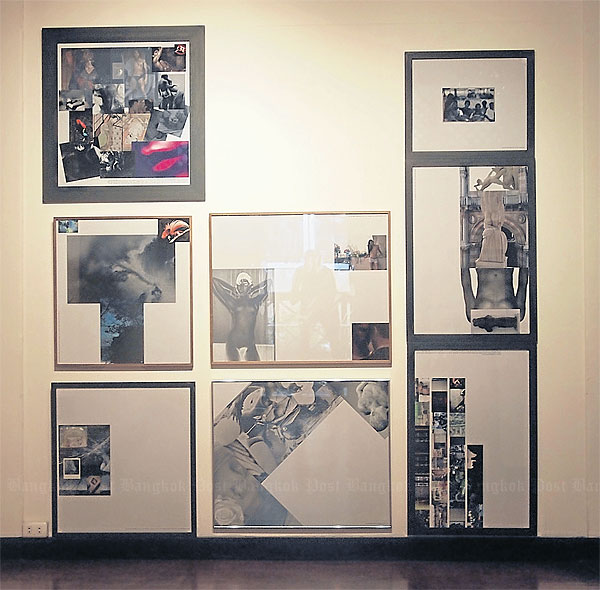 Seeing the value in nature