Tom Yum Goong 2 is neither fresh nor special, but it's crazy enough to please action fans

Bone-snapping maestro Tony Jaa does what he does best and what his fans expect him to do, perhaps no more, maybe no less, and certainly with no smile. 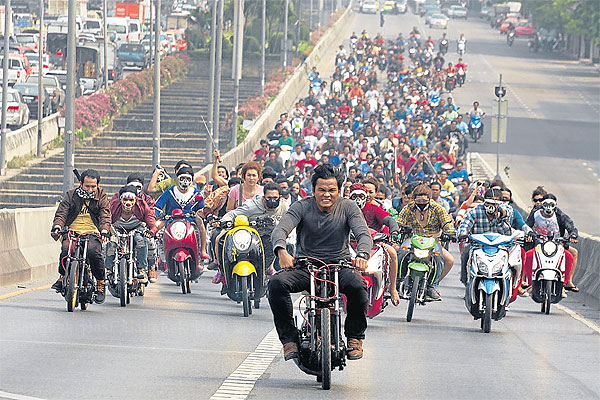 The 3D treatment of his new "dude-where's-my-elephant?" adventure makes sure you get Jaa's flying fists in your face and someone's feet hovering near your popcorn-crammed mouth, plus some runaway train hurtling through a tunnel (in Phuket, no less) as well as the urban melee of the year when Jaa is chased by an ant-like swarm of several hundred motorcyclists _ punkish dek vaan _ that ends with him bungee-jumping off a bridge.

Is that a rehearsal for his role in Fast And Furious 7?

The editing may be better in Hollywood, but for raw daredevilry, visceral stuntsmanship and rough Third-World in-your-faceness, Jaa and Panna Rittikrai, the master stunt choreographer, still have some steam left here.

The bottom line: Tom Yum Goong 2 has just enough punches to satisfy action fans. It runs on martial-arts flick clockwork, with around six big fight scenes in different backdrops (a rooftop, a shipyard, a flaming warehouse, etc), punctuated by a semblance of a plot, and with some mythical hokum about elephants and ancient fighting styles thrown in. It's neither fresh nor special, but it's crazy enough.

Whether the world will care about it _ the first TYG was released in many foreign territories including the US, following Jaa's sensational breakthrough in Ong-Bak _ remains to be seen. Asian action films have largely exhausted their exotic rush among international audiences. Jaa's reputation, as well as that of director Prachya Pinkaew, is still marketable, though I'm not sure for how much longer.

TYG2 ramps up its global appeal with the presence of RZA, founder of the Wu-Tang Clan hip hop crew and martial arts freak. In a story that's far too complicated for its own good, RZA plays LC, an international crime boss who's also a go-between for a rebel force in a fictitious nation whose warring factions are meeting in Bangkok for peace talks. How that's related to elephant boy Kham (Jaa) and his beloved pachyderm Khon, you tell me. Anyway, LC keeps a multicultural collection of bare-knuckle bruisers in his service, including a Thai femme fatale wrapped strategically in red Sellotape (Ratha Pho-ngam, last seen in Only God Forgives). To sum up, LC also conspires with a local Thai mob to abduct Khon, the elephant, in a convoluted terrorist scheme that climaxes at peace talks in Phuket attended by strange-looking dignitaries (maybe it's just bad costume).

Apparently Kham's mission is very simple _ he wants his elephant back _ in stark contrast to the weird geopolitical conspiracy the film tries to cook up. For all its laboured storyline, TYG2 can at least wink at itself and proudly admit its simplistic nature. The best-known line from the original TYG is Kham's innocent, stupid barking at nearly everyone he meets, "Where's my elephant?", a phrase that has entered popular parlance. In the new film, Mum Jokmok, playing an Interpol agent sympathising with Kham, gets the honour of asking Jaa the question everyone else on this side of the screen has been itching to ask: "Why do you keep losing your elephant?"

As long as Jaa gets to show off in a few good fights, who cares? After three Ong-Bak films we're getting a little tired of seeing the man, despite his sturdy elegance and gymnastic brilliance, beating up opponents, no matter how good they are. And yet there are some nice moves here _ what I dig is when Jaa teams up with two pixie girls (Jija Yanin and Teerada Kittisiriprasert) to battle LC's American henchman (martial artist Marrese Crump). The motorcycle mayhem along Bangkok's expressway is audacious and amazing, up there with the good scenes in, say, the Fast And Furious movies in its sheer absurdity. The rest is what this kind of movie is supposed to be _ and what the core audience of the movie is supposed to expect. All is fine, sure, but it is far from phenomenal.

I believe that Ong-Bak and Tom Yum Goong are the two Thai films most seen by audiences outside of Thailand (more than award-winning arthouse titles). That kind of commercial success can be intoxicating and yet short-lived _ even Jet Li couldn't make it that far internationally, and Jackie Chan is now back working in Chinese cinema. For all their bone-cracking adrenaline and silliness, TYG1 and 2 also help promote and confirm the image of "Thainess" according to our own fantasy and cultural rule book.

Starting with the title itself (though the tom yum dish has nothing whatsoever to do with the story), the elephants, the spiciness of style, Muay Thai as an ancient, almost supernatural art form, and finally, the nationalistic undercurrent that Thai fighters, embodied by Jaa, are unvanquishable Mohicans who triumph over a parade of international kickboxers. A fantasy, of course, and one we can all enjoy it while it lasts.