A more sedate way to die

A prison is a place with minimal changes. It is always a place where nobody ever wants to set foot inside if they can help it. 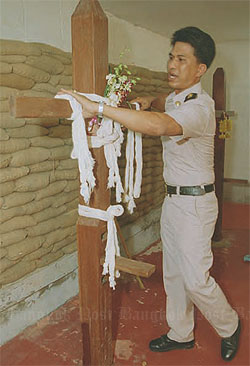 An official shows a cross used in an execution by shooting.

But like the old saying goes, the only constant is change — and there is no exception even for this kind of establishment.

One major change seen behind bars over the past decades has been the form of execution.

According to a Department of Corrections document entitled "History of Punishment of Thailand", execution is the most extreme form of punishment used on a convict and the purpose of it is to eradicate the culprit from society by means of killing.

In ancient times, execution was carried out by kud hua (beheading) because the executioner, at that time, severed the head of a condemned prisoner with a sword.

An official note recorded during King Rama V's reign showed the last prison beheading was that of a female prisoner called Thongleaun.

She was sentenced to death for murdering her stepchild by suffocating the victim in a large water jar. She was also found to have falsely reported the cause of the child's death as drowning.

Later in 1934, the Criminal Code was amended and executions switched from beheading to shooting.

On Sept 12, 1935, the first shooting execution was carried out using a Bergmann submachine gun which became the weapon of choice for executions. Later in 1977, the submachine gun was replaced with a HK rifle. 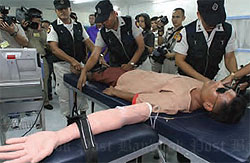 After having a last meal, the prisoner would be tied to a cross in the standing position with his back to the executioner. When signalled, the executioner would fire the gun at a circle on a screen. The circle was positioned exactly so the bullets would hit the prisoner's heart.

An official would then check to make sure the prisoner was dead.

Like beheading, shooting was later dropped after decades of use. In 2003, the Thaksin Shinawatra administration amended the Criminal Code again to switch from shooting to lethal injection.

Prisoners, for the first time, were also allowed to make a phone call to their family before being executed.

Nathee Jitsawang, former director-general of the Corrections Department, said lethal injection is also used in the US, Taiwan, the Philippines, Guatemala. The cost of each execution is only 200 baht and normally takes 25 minutes.

The first executions using lethal injections were carried out on four prisoners on Dec 12, 2003. Two more prisoners were put to death using the new method on Aug 24, 2009. There have been no further executions since then.

Executions are still carried out in the same room in Bangkwang Central Prison despite the switch in the method of execution. The death room now contains an execution gurney, drug injecting devices, and heart rate monitors.

Prison officers performing the execution have received special training in how to carry out their task.

In a typical execution, the prisoner is fastened to the gurney with his two arms fastened outstretched. Needles are placed in both arms with the needles being connected to tubes through which the drugs will be injected.

A sedative is used first to put the prisoner to sleep. After that a muscle relaxant is then administered before the last injection which stops the heart.

Lethal injection could also one day be replaced by another method. But who knows, the death sentence could well be abolished before that change ever comes.