Ancient ice-cream still worth a lick

Salt, dry ice, and a large rectangular bar of frozen confectionary cut to order by a man with a cart ? — what else do you need?

Ice-cream and kids are inseparable, especially during our sweltering summers.

But kids in the past were not as lucky as children today who have a wide choice of various kinds and flavours of ice-cream to enjoy. 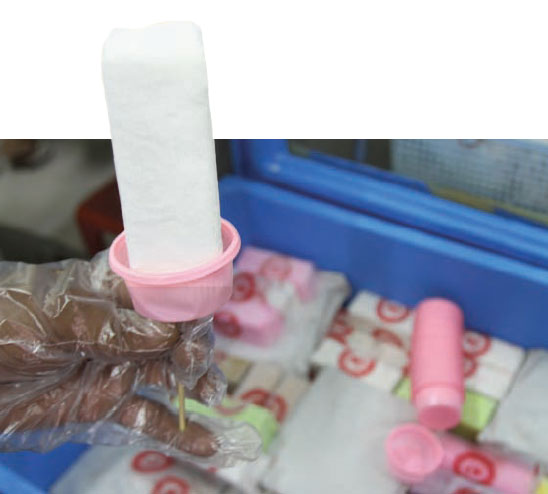 Back in the old days ice-cream was not a fancy dessert — no chocolate chips, no caramel crunch, no marshmallows.

The history of ice-cream, or i-tim, as it's known by Thais, dates back to the reign of King Rama V, when the first ice-making machine was imported to Thailand.

Ice-cream at that time was made from coconut water blended with ice and was considered a special treat for high-class people.

But makers of ice-cream later improved the recipe by adding coconut milk and it became more widely available.

I-tim tat came in the form of a rectangular bar. After a customer chose an ice-cream flavour, the vendor would take the bar out of the cart, slice it into pieces on a cutting board and then insert two little wooden sticks into the pieces to use as holders.

I-tim tat was made from milk, coconut milk, flour, sugar and artificial flavour.

The ice-cream man used salt and dry ice to keep the cart cool as there were no mobile refrigerated carts at the time.

Although the old fashioned ice-cream looks much less exciting than today's frozen treats, it was good enough to keep the kids happy.

Indeed, it was an exciting moment for children every time the ice-cream vendor pedalled his cart past their houses, ringing his bell.

In the 1970s, Pop Company set up the first ice-cream manufacturing plant in Thailand. The company used a duck as the logo on its ice-cream, gaining it the nickname i-tim tra ped (duck brand ice-cream).

The company imported ice-cream making machines from overseas, making it the first company able to produce large quantities of the tasty treat.

The onset of mass-produced ice-cream was a major challenge to i-tim tat vendors and the traditional ice-cream started to fade from the market.

Even the ring of the vendor's bell has been replaced with branded theme songs played through a loudspeaker.

But i-tim tat lives on.

People who maintain a taste for old fashions recently revived the treat. I-tim tat is once again available at old markets and even in some modern shopping malls.

The treat costs 10-30 baht each, depending on the size and flavour.