Despite a myriad choice of talcum powders, a selection of pang nam humbly stands on a shelf at The Mall Bangkapi's Home Fresh Mart, which indicates a lasting demand for this old-fashioned beauty product.

Pang nam means "liquid powder" and it can be referred to as a skin lotion or tonic, depending on the brand. 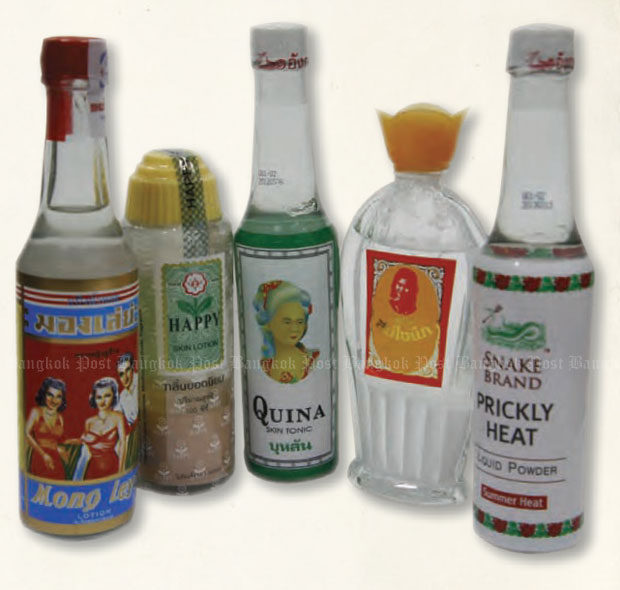 The brands on offer at this supermarket include Quina, Mong Leya, Somjainuk, Happy and Pan-ngam.

Originally launched in 1932 as Manohra, Quina Skin Tonic is a fragrant and cooling formula developed by the British Dispensary, who hailed it as a cosmetics breakthrough.

The skin-brightening and oil-control formula can be used as a foundation for the face or applied to the body to refresh the skin and relieve itching.

Quina originates from the word queen, and an image reminiscent of a famous French royal appears on the label as a symbol of beauty.

"Quina Skin Tonic was promoted as an offering to the moon, and in Yaowarat, the British Dispensary organised competitions to arrange offerings, including a bottle of Quina, for the mid-autumn Moon Festival."

In 1952, the British Dispensary introduced its legendary Prickly Heat cooling powder that served as "cosmetic" air-conditioning to combat the hot climate.

From then on, product R&D focused on talcum powder, which seemed easier to use than liquid powder.

"Even though it's a talcum powder, some people still add water and splash it on their skin. So we also have Prickly Heat in liquid powder form," Pongphan said.

"The original formula for Quina Skin Tonic is available in three fragrances to serve a niche market of loyal customers."

Mong Leya Lotion still boasts its original label with an image of two ladies and a gentleman, inspired by a poster of a 1950s Hollywood movie.

At that time, it gave the product a modern look while delivering the message that the skin lotion was good for both men and women.

The red bottle cap has the Ying Chu Chang (a woman holding up an elephant) logo, which pays tribute to the wife of Mong Leya's founder, Suthep Srimaratana.

She ensured the quality of production while her husband sold the skin lotion, initially by rowing his boat along the Nakorn Chaisri River in Nakhon Pathom to find customers.

Some 50 years later, the Mong Leya lotion is still going strong with a broader distribution in convenience stores, supermarkets and hypermarkets.

Pang Nam Somjainuk is another popular brand in which Tawatchai Pimolsiriphol continues the legacy of Khun Somnuk, who followed in her mother's footsteps in making liquid powder.

Six years ago, he changed the colour of the paper box from pink to orange to attract new customers.

In addition, he put the word mai (meaning new) on the label, which is still graced by the face of the founder.

"Pang Nam Somjainuk is still appreciated by the older generation. They may have used it on their children, who have grown up familiar with liquid powder," Mr Tawatchai said.

"A declining number of loyal users, however, has us seeking a younger generation of customers to keep the brand going.

"A daughter of a friend used it for treating acne and the teenager is a now a fan of our liquid powder."