Reaping what they Sow

One gritty and one lyrical, two new Thai films about farmers offer a timely portrait of rustic life as the government's rice scheme imbroglio deepens

Rice is what has raised Thailand, but our staple crop hasn't raised many smiles in the Land of Smiles lately. When Uruphong Raksasad set out to make Pleng Khong Khao (The Songs Of Rice) two years ago, he didn't imagine that his documentary would acquire a timely resonance now that the epic mess of the government's rice-pledging scheme has become an escalating imbroglio and national embarrassment. Rice, the filmmaker believes, is the soul of the country, but the song it sings has unfortunately turned into a sad one. 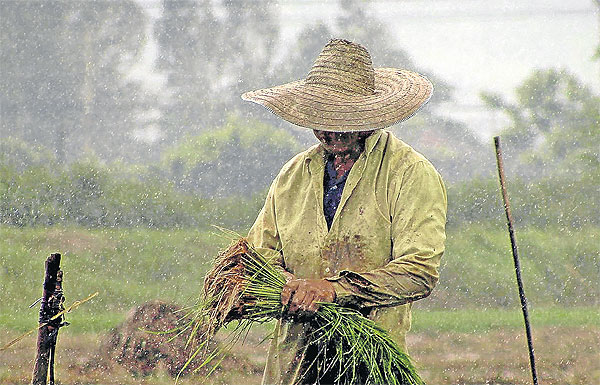 "I didn't mean the film to have any sense of political irony," says Uruphong, an internationally-known documentary director. "And with all the bad news about rice at the moment, hopefully my film will show another dimension of what rice is, what it has been, to the farming society in this country."

Uruphong knows a thing or two about rice. He comes from a farming family in the North, and his previous two documentary films, Stories From The North (2008) and Agrarian Utopia (2009), did something that not many Thai filmmakers have done in the past two decades. They put the rural people, their buffalo, their livelihoods and the verdant inferno of endless rice paddies _ in short, the agricultural existence _ on the big screen. Agrarian Utopia (Sawan Banna) has been shown at over 50 film festivals around the world. In 2010 and 2011, Uruphong won several prizes at international cinefests, and was named best director at the Subannahongsa Awards, the biggest Thai movie industry accolade that had no history of honouring documentary films. 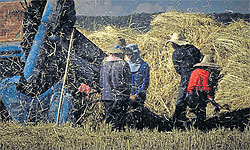 Agrarian Utopia, with its social-realist satirical title, has a sharp political edge. Scenes of politicians campaigning at gatherings of farmers and massive street protests in Bangkok bookend the real-life narrative of two rice-growing families and their ordeals. In The Songs Of Rice, however, Uruphong goes for full impressionist mode. The film is a lyrical collage and visual documentation of rice culture around Thailand, from North to South, even from this world into the next. If Agrarian Utopia sees rice from economic and political perspectives, the new film is a spiritual celebration of the plant and a reminder that to the rural community, rice is much more than just something they, and we, eat.

"I travelled around the country, not to as many place as I would like, but still many places, to film the people's relationship with rice," says Uruphong, who will premiere The Songs Of Rice next week at the International Film Festival Rotterdam before its Bangkok release later.

''I didn't plan to tell any deep story; I simply wanted a record from as many places as possible. The film is more about feeling than about narrative, which I think I already did in Agrarian Utopia and another television documentary.''

If Uruphong's movies sometimes feel too idealistic, The Songs Of Rice will again call up the debate. The film is a non-narrative stream of poetic consciousness, flowing through images and songs, both traditionally haunting and contemporarily evocative. Farmers are everywhere, working, dancing, in the fields, with their beasts, on tractors, and at various ceremonies at which rice is worshipped or sanctified. 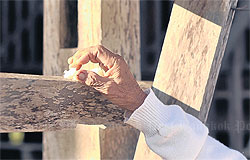 Uruphong went to Hat Yai, where the villagers celebrated the kuan khao tip rite to remember the woman who brought rice to Lord Buddha; to Yasothon, where farmers light up fiery bamboo rockets to beg the gods for rain; to Amnat Charoen, where a community glorifies the newly harvested paddies in boon koon larn ritual; to Loei, where a woman sings us a heartaching song about a dead mother who's been waiting in vain for her son to make rice offerings to her in the netherworld.

''Rice represents a spirit that I think the whole country shares,'' says Uruphong. ''It's Buddhism and animism, the details are different, but it's the same spirit, the same cultural importance everywhere.

''In fact, rice is just a frame of thought here. What I want to catalogue is the rural people's way of life and how they continue to take rice seriously. We don't see rural people on film that much, or hardly any at all. I guess I could've called the film The Countryside, or something like that, but of course The Songs Of Rice sounds much better.''

And those songs _ danceable or melancholic, sacred or delighting, folksy or postmodern _ are sung and played to the melodies of khaen pipes, traditional sueng guitars and woad (an instrument made from dried rice stems) as well as futuristic synthesisers. Uruphong says that he wanted to make ''a movie that's pleasant to watch, with each sequence seemingly unconnected, and yet everything proceeds smoothly''. He always wanted to put songs in his films, and he's found the right format to do it here.

Without intending to, here's a pleasant rice movie at a time of unpleasant news about rice. Uruphong is aware of that fact, and without veering too heavily into politics, the filmmaker, who's based in Chiang Rai, says he's not happy about the way the rice-pledging scheme has turned out, with farmers left hanging and waiting for the promised money. ''This was bound to happen,'' he says. ''The mess will continue and everything is likely to collapse. That's really too bad.''

The Songs Of Rice will premiere at International Film Festival Rotterdam next week. It will have a Thailand release later.

Boonsong Nakphoo's brand of realism takes us straight into the grit, the sweat and the anguish of rural people _ his people, the filmmaker says. For 15 years, Boonsong, whose family is still growing rice in Sukhothai, has made several low-budget short and feature-length movies that put the plight of farming villagers on the screen, with little adornment or poetic musing.

In his latest, the black-and-white Wang Pikul (Village Of Hope), Boonsong continues his expedition along that dirt-strewn path. The film, which will have a special screening this Sunday at the Thai Film Archive in Salaya, doesn't deal directly with the current malaise, but shows the damaged structure of rural life after the farmers have been pushed along in the train of ''national development''. Basically, Village Of Hope _ which Boonsong shot in his home town with many of his family members in the cast _ is about a grandmother who's waiting for her descendants to return from Bangkok.

''It's a story of broken families,'' says Boonsong. ''The film is not about my life or my family, but 70% of it is based on what's really happening: There are so many failed families in rural communities; almost every household in my village has an orphan. People leave their children when they went to look for work elsewhere, Bangkok mostly.

''To me, this is symptomatic of our times, when people are struggling to keep up with the world that's moving too fast for them.

''My idea is to present the rural life as it is _ I want to show that it's not the romantic place that some people think it is, hence the black-and-white photography. It's a movie about rural people as seen through the eyes of rural people.''

Village Of Hope _ the title is ironic, of course _ is a continuation of Boonsong's 2011 film Khon Jon Phu Ying Yai (Poor People The Rich), which was released at Lido and toured a few film festivals. That film addressed the economic aftermath of progress, as Boonsong did before in early 2000s short films such as Chaona Klab Baan (Farmer Returns) and Ta Kab Larn (Grandpa And Grandson).

''No, the stories of agricultural people hardly have a place on the big cinema screen, we have to go back to the 70s to see something like that,'' says Boonsong. ''And now, I don't think young people would want to see this movie about a faraway village, they won't have time for this,'' he chuckles. ''But still, this is what I do, this is the kind of story I tell, because the problems my people face still remain.''

Village Of Hope will have a special screening at Thai Film Archive this Sunday at 3pm. 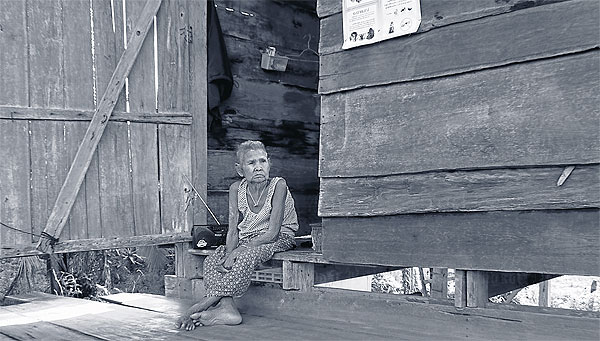