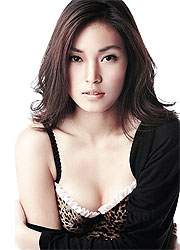 A policeman with a fondness for fast cars is defending his marriage proposal to actress Pichanak "May" Sakakorn, after news emerged the pair have been together just three months.

Thititsan "Joe" Uthanapol, also known as "Joe Ferrari", went down on bended knee before friends at the Millennium Hotel in Bangkok last week to propose to May, who was wearing bridal white and clutching a bunch of roses. She also posed for pictures wearing a ring that Joe gave her.

Joe, who works for the Narcotics Suppression Bureau, was forced to go before the media a day later after reporters found he was once married with a child, and that he and May have been seeing each other just a few months.

He now admits May has yet to agree to his proposal of marriage, and is asking reporters not to read too much into the relationship.

"We've been talking seriously for a couple of months. We're just two people getting to know each other's hearts.

"Some couples need only a short time to know they click. Call it a sixth sense, but I want to care for this woman for the rest of my life."

Joe admitted he was once married to hi-so luxury car dealership owner Nissarat "Jan" Kanasut, with whom he has a four-year old child, Jaguar, but says the couple have barely spoken in two years.

As the disclosures of his romantic past threatened to take the shine off his marriage offer, May turned up at a gathering late last week without the ring Joe had given her.

May, who has yet to comment publicly on Joe's offer, was herself only recently in a relationship.

He has passed on his best wishes.

As he went before the media to defend his lightning marriage proposal, a nervous Joe admitted he started seeing May eight months ago, before she had broken up with Palm.

In a series of interviews after Joe's "marriage" news went public, Saymai said she and Joe started dating last March, and grew apart two months ago.

"The first I knew that we had officially broken up was when news emerged of his proposal to May," she said.

"I've never stopped loving you, I just ran out of energy," she said in a social media post to the pair.

"I know I can't hope to keep Joe to myself. I can only wish the two of you the best. Thanks for entering my life. I will keep that happy memory alive forever."

Joe and May were introduced by actress and director Panita "Ning" Tumwattana, who denies she helped break up Joe's marriage to Jan.

"He broke up with his wife ages ago. I know well what it's like to have your partner wrested away, and speaking as a wife and mother would never encourage such a thing," she said.

"His past is in the past, and I am confident he's a good person," she added.

Ning is married to wealthy businessman Jin Tumwattana, who apologised last year after having a fling with Bangkok socialite Namwan Petnunthawong.

Earlier, Ning herself was accused of stealing Jin away from his previous love.

Joe, who despite his "Ferrari" nickname is best known for owning the first Lamborghini released in Thailand to celebrate the marque's 50th anniversary here, races cars with Ning's husband.

On his failed marriage to Jan, he said: "I admit I am flawed, but I made those mistakes early in my life. We never registered our marriage, though we do have a child.

"As for Saymai, we stopped seeing each other as the age gap was too big, and we just couldn't get along.

"Please don't try to dig up their past, for the sake of my child, who is likely to face questions," he told reporters.

"Matters concerning children are sensitive, and I will keep performing my duty as a father no matter what happens.

"I'm sorry I have made May suffer in public, and only want her to be happy. I merely ask for a chance to prove myself."

By the end of the week, May still had yet to say a word about her new love.

Channel 3 news anchor Sorayut Suthassanachinda is upset protesters accuse him of bias, saying his news show gives so much airtime to their rallies that its coverage of panda Lin Hui's pregnancy has suffered.

Sorayuth took to Facebook last week to complain about the way protesters malign him on stage.

"First, I was accused of under-estimating the turnout at their rallies. Now I'm accused of not giving them enough coverage," he wrote.

The presenter insists the protests get the coverage they deserve.

He was sure some of his protester critics rarely bothered watching his show, but are quick to believe whatever exaggerated claims are made at the rallies, including that he devotes as much as 30 minutes a day to coverage of Chinese panda Lin Hui's pregnancy at Chiang Mai zoo.

"We've given over almost the entire programme to the protest on many occasions, so much so that we have just two or three minutes left for Lin Hui in the children's part of the show," he said.

The ASTV-Manager newspaper, a fan of the protest movement, ran a lengthy piece last week to let Sorayuth know that the rally-goers have yet to be convinced.

Buffalo soldier in the wars

Former model Sura "Nicky the Stick" Theerakol was punched for his troubles after criticising protesters at the Asok stage last week.

Nicky, also known as "Nine Inches" in joking reference to the purported size of his member, jumped on stage last week and seized the microphone from the speaker. "Hey, I'm one of the King's subjects too!" he exclaimed. "You buffalo!" 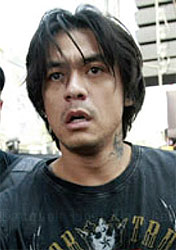 The crowd blew their whistles at him in displeasure, and jeered him off stage.

News reports said protest guards, fearing for his safety, quickly bundled him away to their incident tent to be "interrogated". Later, news photos showed guards escorting him from the scene.

As the guards manhandled Nicky away from the stage, a grizzled man in his fifties, unhappy at the way Nicky had spoken to them, sprang out of the crowd and landed a punch on his head.

Some netizens said Nicky, who has a history of psychiatric trouble, should be pitied, not harassed.

"This is one reaction to the pent-up frustration on the streets," one wrote. "The protesters close the roads, cause traffic jams and deprive people in the area of a living. They go on the march for supporters every morning, and even those who have no stake in the battle are coming out to say enough."

However, others were less sympathetic. "Nine inches deserves nine punches," one said.