Opening the ancient, wooden bi-fold doors of Wik Kru Thawee Theatre is reminiscent of a scene in a mummy movie where the lead actor — perhaps an intrepid archaeologist, or explorer — pries open a long-sealed tomb. Dust stirs as the stagnant theatre air mingles with air from outside. Rays of midday sunlight beam across the darkened chamber, only instead of revealing a gilded sarcophagus flanked by riches, the only treasure to be found was row after row of wooden bench seats; the thrones of movie-goers of decades passed. 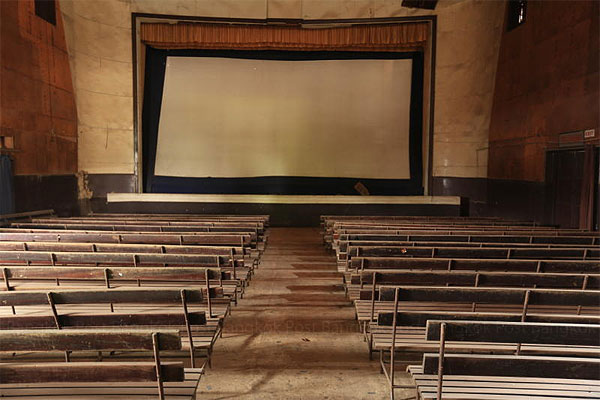 The wooden benches in the auditorium.

Wik Kru Thawee Theatre is equivalent to a cinematic tomb. It is located in Photharam district, a quaint little town in Ratchaburi province, which has only ever had one venue dedicated to the exhibition of film, and it’s been shuttered — tomb -like — for 16 years. Its worn and weathered appearance blends seamlessly with the rustic two-storey shophouses — some approaching the one-century mark — that comprise a good portion of the town.

Heritage preservation is high on the collective agenda in Photharam, once a key stopover for riparian travellers going between Kanchanaburi and the Gulf of Thailand via the Mae Klong river. Unlike many of Thailand’s older river ports, Photharam’s core is still characterised by narrow lanes and wooden shophouses.

The gradual widening of roads to accommodate cars and trucks has little presence in much of the town’s core. Conscious of its early 20th-century aesthetic and human scale, residents have made efforts to keep it up.

The Wik Kru Thawee Theatre featured prominently on the list of Photharam’s preservation initiatives, a landmark institution since its grand opening in 1958. Though out of business since January 1998 (according to a local, the last movie screened there was James Cameron’s Titanic), in recent years local activists have sought ways to revive it, with the aim of using it to educate future generations about the community spirit that once accompanied movie-going.

“We’ve tried to build support around the old theatre,” said Mr Weewat Suweerathanapat. “But it needs a lot of investment to bring it up to code. That’s not easy to find.”

Mr Suweerathanapat is well acquainted with the old cinema. During the 1980s and 1990s he was employed as its art director, tasked with painting the giant movie cut-outs and posters that advertised the day’s film. His long association with Wik Kru Thawee also positions him as the theatre’s de facto historian, able to detail its back story in full.

“The theatre in its present form was built in place of a much older theatre made entirely of wood. In the late 1950s that original theatre was demolished, then rebuilt out of concrete and steel and given its present name,” he explained.

The name “Wik Kru Thawee”, it turns out, is a composite of the given name and occupation of the builder/owner — a local schoolteacher named Thawee Aekarath. Kru Thawee (kru means teacher) was passionate about film and viewed the medium as good way to expand the horizons of the people of Photharam. His love for film was also inherited by his son, Thira Aekarath, who went on to an illustrious career as a cinematographer, best known for shooting the 1970 watershed film Monrak Luk Thung.

As far as Thai stand-alone theatres go, the Wik Kru Thawee comes from an unusual era. It was built in a transitional period for Thai movie theatres, well after concrete had replaced wood as the material of choice, but just shy of the nationwide theatre boom which began in 1961. That same year the US government started pumping millions of annual aid dollars into the Thai economy, a political counter-measure aimed at thwarting the spread of communism. That aid stimulated social change far and wide, spurring development and market integration in even the most far-flung corners of the country. With growing wealth and sophistication, a taste for cinema blossomed, and for roughly the next 20 years stand-alone movie theatres were constructed in nearly every district in every province of Thailand.

The theatre boom gave international movie distributors a healthy market in Thailand. Although dominated by imports from Hollywood, the international viewing fare was rounded out by films from Hong Kong, Japan, India and Europe. In fact, a glimpse of a newspaper’s movie section from the 1960s or 70s will reveal a far more diverse range of available films than is shown in Thai cinemas today — ironic considering the far more cosmopolitan Thailand of today than of 40 years ago.

The domestic film industry also began to flourish, breaking with tradition in order to keep stride with technical innovations from abroad. Some of Thailand’s most iconic stars — the likes of Mitr Chaibancha and Petchara Chaowarat, as well as Sombath Metanee and Aranya Namwong after them — became household names during this era. Like Photharam, countless other towns across Thailand contain a ruin or two of a once-elegant stand-alone movie theatre. Most sit empty, slowly deteriorating in advance of demolition. Others have been re-adapted to suit new business types: supermarkets and parking lots most common among them. Few of these relics, however, have become the subject of revival to the extent that Wik Kru Thawee Theatre has.
Nationwide, singularly unique movie palaces from the golden age of theatre building are being demolished with little thought given to their intrinsic cultural worth. Last November, the Bangkok metro area lost its last surviving double-feature theatre with the closing of the Nakorn Non Rama. Meanwhile, the beloved Scala and Lido theatres likewise face an uncertain future. Chulalongkorn University, the landlord of the two iconic 60s-era theatres, is mysteriously contradicting its typically steadfast support of architectural and cultural heritage preservation.

Thailand’s modern multiplex theatre operators are opening branches further afield, venturing deep into provinces where they previously never existed. These shiny new complexes lack nothing in terms of the latest viewing and sound technologies. In that regard, they are world class in every way. But in terms of architectural uniqueness and interplay with the communities they serve, they simply do not hold up to the historic stand-alones of old. There ought to be room for both to exist simultaneously.

Philip Jablon is an independent photographer and researcher, affiliated with the Luang Prabang Film Festival. His work on Southeast Asia’s stand-alone theatres can be seen at seatheater.blogspot.com 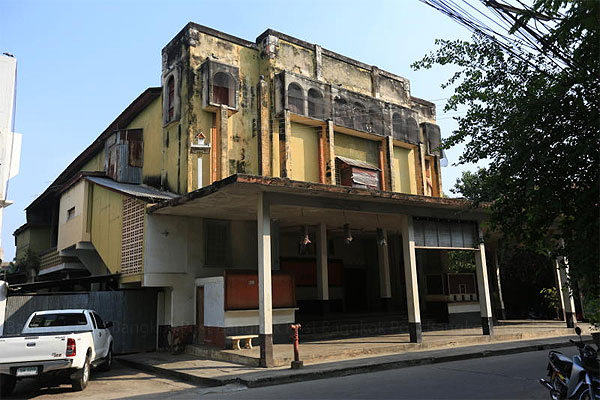