Haruki Murakami's first collection of short stories in nine years hit the shelves in Japan on Friday with some excited fans queuing for the midnight launch. 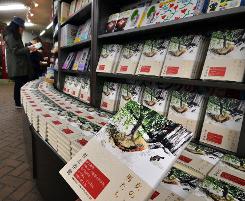 A new book by Japanese author Haruki Murakami, "Onna no Inai Otokotachi" which can be translated as "Men Without Women", goes on sale at the Sanseido bookstore in Tokyo on August 18, 2014.

Around 70 fans took part in a countdown ceremony at Kinokuniya bookstore in Tokyo's entertainment and shopping district of Shinjuku, where firecrackers were set off as the clock ticked to the witching hour.

The collection, entitled "Onna no Inai Otokotachi" -- which can be translated as "Men Without Women" -- includes five short stories which have already been published separately in magazines and one new offering.

"Murakami is definitely best known for his (long) novels but reading short stories is a different kind of pleasure," Yoichi Shindo, a web designer, said after buying a copy at the bookstore. "I have been waiting a long time to read his."

Publisher Bungei Shunju has already raised the first shipment of the book to 300,000 copies from 200,000 due to heavier-than-expected advance orders for the first compilation since 2005, local media said.

"It is so rare to see so many people gathering for one writer," said Yuka Sugimoto, another buyer. "I was looking forward to seeing this. It is a bit like a festival."

The collection is the first publication since Murakami's latest novel "Shikisai wo Motanai Tazaki Tsukuru to Kare no Junrei no Toshi" -- "Colourless Tsukuru Tazaki and His Years of Pilgrimage" -- was released in April last year.

Among the short stories of the latest collection is a 24-page novella, "Drive my car -- men without women", which sparked controversy when it first appeared because of a passage that offended a small Japanese town by suggesting its residents habitually throw lit cigarettes from car windows.

Murakami said subsequently he regretted using the name of the town and would change it when the story was published in book form.

Murakami, 65, whose often surrealist works have been translated into about 40 languages, is widely spoken of as a future Nobel Literature laureate.